Hahahaha... you are posting the Mirror from the UK?

Ironic that a mirror shows your own reflection and this article is talking about what is happening to the west... rich getting richer and poor getting poorer...
Cowboy's daughter

has anyone posted about this? I'm curious about it!

In Russia, generals cannot retire or resign. They can only be dismissed by the President, but the reality of what has happened gets lost in the translation and/or the ignorance of the reporters.
Guest

In Russia, generals cannot retire or resign. They can only be dismissed by the President, but the reality of what has happened gets lost in the translation and/or the ignorance of the reporters.

Every month or two there is a article like this. PUTIN SACKED 30 GENERALS. Something needs to attract clicks.
Cowboy's daughter

In Russia, generals cannot retire or resign. They can only be dismissed by the President, but the reality of what has happened gets lost in the translation and/or the ignorance of the reporters.


I know, I know, some of you are probably going to be Buzz Killingtons and pooh-pooh this thing right up front. But, so far, I respect OS, and plan to watch. It looks all dramatic, anyhow.
miketheterrible

Oliver Stone is one of the few Americans who is actually smart and knows what is going on. His show "History of America" was great. Oliver Stone is a brilliant man.
BKP

Agree. He's solid. He's one of the few I'd trust to have the personal integrity necessary for this project, as well as the directorial style to do justice to the compelling nature of the subject. Who else could do it? John Sayles, maybe? But, the fact is, Stone has way more cachet right now. So, in short, I can't think of anyone better to tackle this.
GarryB

Oliver Stone is the only US documentary maker AFAIK.

All the rest do infomercials for the US war department.

All other US documentaries talk about the evil backstabbing attack by japan on Pearl Harbour, but OS actually looked in to why they attacked. A US and British embargo on Japan because of its actions in China... pretty hypocritical from British point of view considering their treatment of china... but land of oppression are they.

when talking about the early period of WWII in Europe he mentioned that Stalin wanted an alliance with Poland, but Poland was not interested and was sucking up to Germany. He approached Britain and Britain said talk to Poland.

When Germany made an offer of half of Poland there were no better offers on the table from anyone so he took it.

He is the only American director I would bother watching a documentary from.
JohninMK

EDIT: Well looks like it had me. Mind you 'many a true word spoken in jest' is a good old English saying


So who's the boss Motherf..ers?

The Russian president said that his code name during the KGB academy education was "Platov," adding that he sees no reason to use code names now.

"As you know, I began my work from foreign intelligence service. Then I sometimes used technological pseudonyms. But now it's just ridiculous for me to use a pseudonym. Of course, I would not take any nickname [in social media]… By the way, it would be normal for everyone [not to use nicknames in social media]. Why hide behind a pseudonym?" Putin said speaking to children of the Sirius children’s center in Sochi on use of nicknames on social media accounts.

"When I studied in the intelligence school, I had a pseudonym 'Platov.' Everyone had pseudonyms, because the work presupposes a certain level of conspiracy," Putin said.

Putin added he does not have any accounts on social media networks.

Putin said he knows that there are some 5,000 social media accounts using his name. "I have nothing to do with any of them, just so it is clear to you and other users. It is not me writing under my name. I hope they say nothing bad, but either way it is not me," Putin said.

"It seems to me, if a person does something worthy, interesting, something that he can be proud of,… why hide behind a pseudonym?" Putin concluded.

In 1985-1990, the Russian president worked for the KGB in the Eastern German city of Dresden. According to him, he was doing foreign intelligence work.

In 2013, Putin provided a rare insight into 16 years of his work in the KGB. "It’s bad to eavesdrop," Putin smiled and told a meeting of the All-Russian People’s Front movement. "I learned this from my time in the KGB. [And] I gave it up."

Ayatollah Khamenei said Iran and Russia could neutralize US sanctions by ditching dollar in bilateral and multilateral trade and using their national currencies instead. The Leader said Iran and Russia should further develop cooperation particularly in economy, saying the economic capacities of the two countries are well beyond the current level.
'Iran a strategic partner'
The Russian president, for his part, described Iran as "a strategic partner" and a "great neighbor," stressing that he would welcome any potential to fully bolster and expand bilateral relations.
Putin said Iran and Russia could boost their ties in the sectors of energy, modern technology, agriculture as well as joint oil and gas projects.
Broaching the war in Syria, Putin hailed the achievements of the Iran-Russia cooperation in the war against terrorism, calling for "a suitable political process to be considered in the Arab country."
Lauding the Leader's stance on achieving shared objectives in Syria as wise and very effective, the Russian president said, "We proved to the world that we are able to resolve our region's highly important issues without [any help from] extra-regional countries."
http://www.presstv.com/Detail/2017/11/01/540638/Iran-Leader-of-Islamic-Revolution-Ayatollah-Khamenei-Russian-President-Vladimir-Putin
PapaDragon 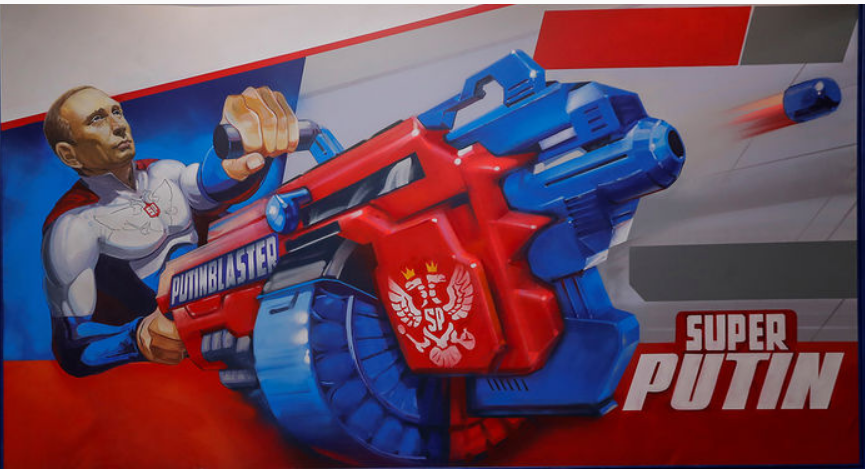 Bryan McDonald wrote:The whole point is Putin isn't seeking to create a successor who would rule like he has done. He wants to transfer Russia from personalistic to institutional power. Constitutional changes to rebalance power between executive & legislature very likely in his final term.

Anatoly Karlin wrote:I suspect this will take form of Singapore model, with United Russia as PAP and Putin as elder statesman. Though I expect the authoritarianism and multi-nationality aspect will be more enthusiastically embraced than the efficiency and meritocracy one.

Bryan McDonald wrote:The whole point is Putin isn't seeking to create a successor who would rule like he has done. He wants to transfer Russia from personalistic to institutional power. Constitutional changes to rebalance power between executive & legislature very likely in his final term.

Anatoly Karlin wrote:I suspect this will take form of Singapore model, with United Russia as PAP and Putin as elder statesman. Though I expect the authoritarianism and multi-nationality aspect will be more enthusiastically embraced than the efficiency and meritocracy one.

Authoritarianism is a brainless, meaningless word in this context. Americans live under a de facto one-party regime that
gives them bread and cirrus diversions about how "divided the two parties are". Standing back and looking at the whole,
the US has a rather clear leadership and associated foreign and domestic policy. All the BS posturing about Trump is vapid
theater. There is no discontinuity from one president to another.

Since the EU "democracies" are nothing more than US vassals, the question begs to be asked: is there such a thing as an
independent democracy? India is touted as the biggest democracy (if you ignore American chauvinist prattle). But India
is basically a collection of states and life ain't all that grand in these states. India's "non-authoritarianism" is not a feature
at all levels down to the individual.

So Russia is supposed to follow a model that does not actually work anywhere?
Kimppis

I don't really disagree with you and I don't think Karlin is particularly against Putin or those plans. Some years ago he rated Putin 8/10 as a leader, although a while ago he dropped it to 7/10. He's just a Russian nationalist (yeah, Western MSM, nationalists/ultra-nationalists are much more numerous than your beloved pro-Western "liberals"), who are against certain policies of the Russian establishment: "importing" migrants from Central Asia, the blocking of nationalist websites and "hate speech", etc (again, yes Western media, the Russian authorities actually do that and contrary to popular believe in the West, Putin and the Russian establishment are not actually ultra-nationalists).

It's just that Singapore seems to be particularly clean, with a very low level of corruption and meritocratic government, while being authoritarian. Russia is of course very different, when it comes to its size, culture and history. Russia is still sort of a work-in-progress. But in any case they seem to think that Putin will become Russia's Lee Kuan Yew (which means he will actually retire in 2022-24), with United Russia as the dominant political party. That doesn't sound bad to me at all.

His article on Singapore and Lee Kuan Yew: http://www.unz.com/akarlin/lee-kuan-yews-flawed-utopia/ I don't understand... they had an election for president and there were more than two candidates?

Isn't there just supposed to be a republican and a democrat in an election?

How can democracy work when big business have to contribute funds to more than two election funds?

That is just crazy...
Kimppis


So @antontroian and I trawled through Russian expat voting data and found massive increases in support for Putin among Russians living abroad - particularly in NATO countries. Germany alone saw a 3x increase in Putin votes. Check out our findings here:

(And no, I'm not going to even bother giving clicks to the Washington Post. Apparently the comment section is really bad as well. Not surprising, I remember last time I read something Russia-related there, I think it was just after Trump won. The commenters were absolutely unhinged...)

How about you limit the Russophobia a little, huh?

But things have gotten so crazy that is probably only going to increase Western hysteria. "Russian agents are everywhere, they're living among us!!!"