Thats the business there.

Its going to cost in the ball-park of a conventional towed artillery piece + truck to tow it but all stuck together with quick deploy/scoot ability.
PapaDragon

If these heavy trucks have pricetag and operating costs similar to standard ones then wouldn't it make more sense to move wheeled Coalition on this truck as well?

Seems like much more stable platform, it would be under much less wear and tear due to weight and it should still fit on a cargo plane

It has a rear mounted firing spade to absorb recoil but does not seem to have the jacks to stabilise the vehicle located around the vehicle.

Rather than having soldiers standing at the rear feeding rounds in to this gun it looks like it has some sort of auto loading system... their might be a loading vehicle that tops up a fixed auto loader with perhaps 6-12 rounds ready to fire and then the loading vehicle tops the auto loader back up with 6-12 more rounds or maybe it has a loader and direct feed so a burst loader is attached to the vehicle which can be hand loaded or loading vehicle loaded an then fired, or the burst loader can be filled but for normal ops it can be hand loaded or loaded from an auto loading vehicle for long periods of shelling with an option to use the burst feed loader for short high tempo bursts.

I would suspect this vehicle would probably significantly cheaper to buy and operate than any tracked model but also cheaper than the wheeled coalition... the wheeled coalition seems to have a full coalition turret so likely has 70-80 rounds and propellent charges ready to fire... but the loader support vehicle for this vehicle could probably also work with all artillery vehicles to allow sustained fire.

I would like to see a lighter towed 152mm gun that perhaps uses all the same projectiles, but a smaller lower energy propellent charge out to perhaps 25-30km or so.

It would mean it could be made lighter and more mobile under their new helicopter types for use in rugged terrain but with a heavy shell with a lot more power than the 122mm shell. In the mountains range is not so critical but lighter weight would make it easier to operate and move around the place... and ammo commonality would be valuable too.

A tracked or wheeled version of the lighter version could be smaller and more mobile and be used by naval infantry and VDV and would be a very powerful system using standard ammo...

The lightweight model 152mm gun could be mounted on an updated D-30 mount so it can turn 360 degrees to shoot in any direction.

this vehicle seems to have a turntable mount so it might be able to turn a few degrees either side but the single spade and no jacks suggests to me this lighter vehicle probably moves with the recoil so perhaps being able to aim 20-30 degrees either side of directly forward is probably about as good as it can manage... which is fine.

A spade would not be much good on a sealed road as it would not dig in, so it clearly leaves the road to fire, so lack of traverse is not a huge problem... the article does call it a cross country truck... called an all terrain truck.
Hole 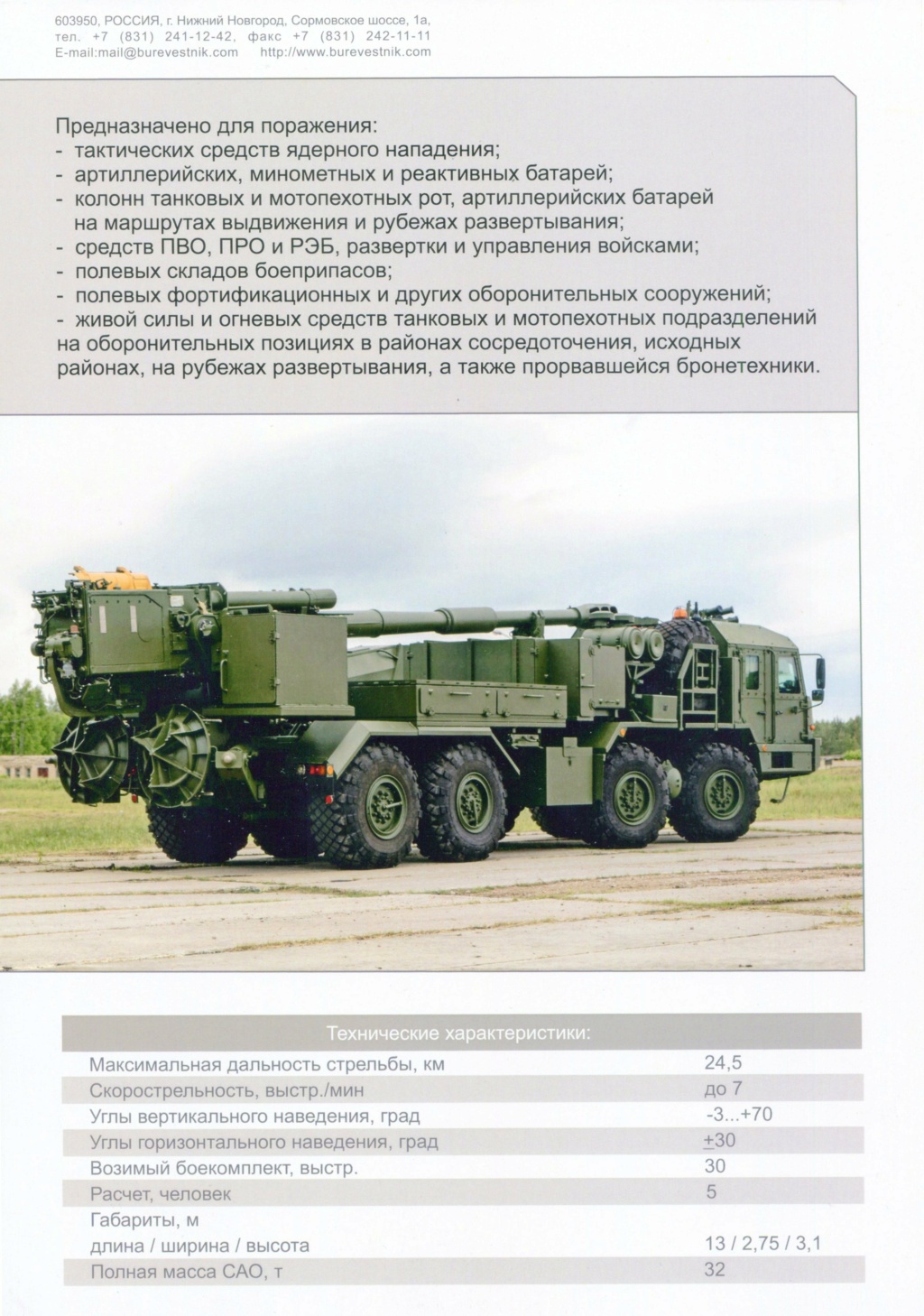 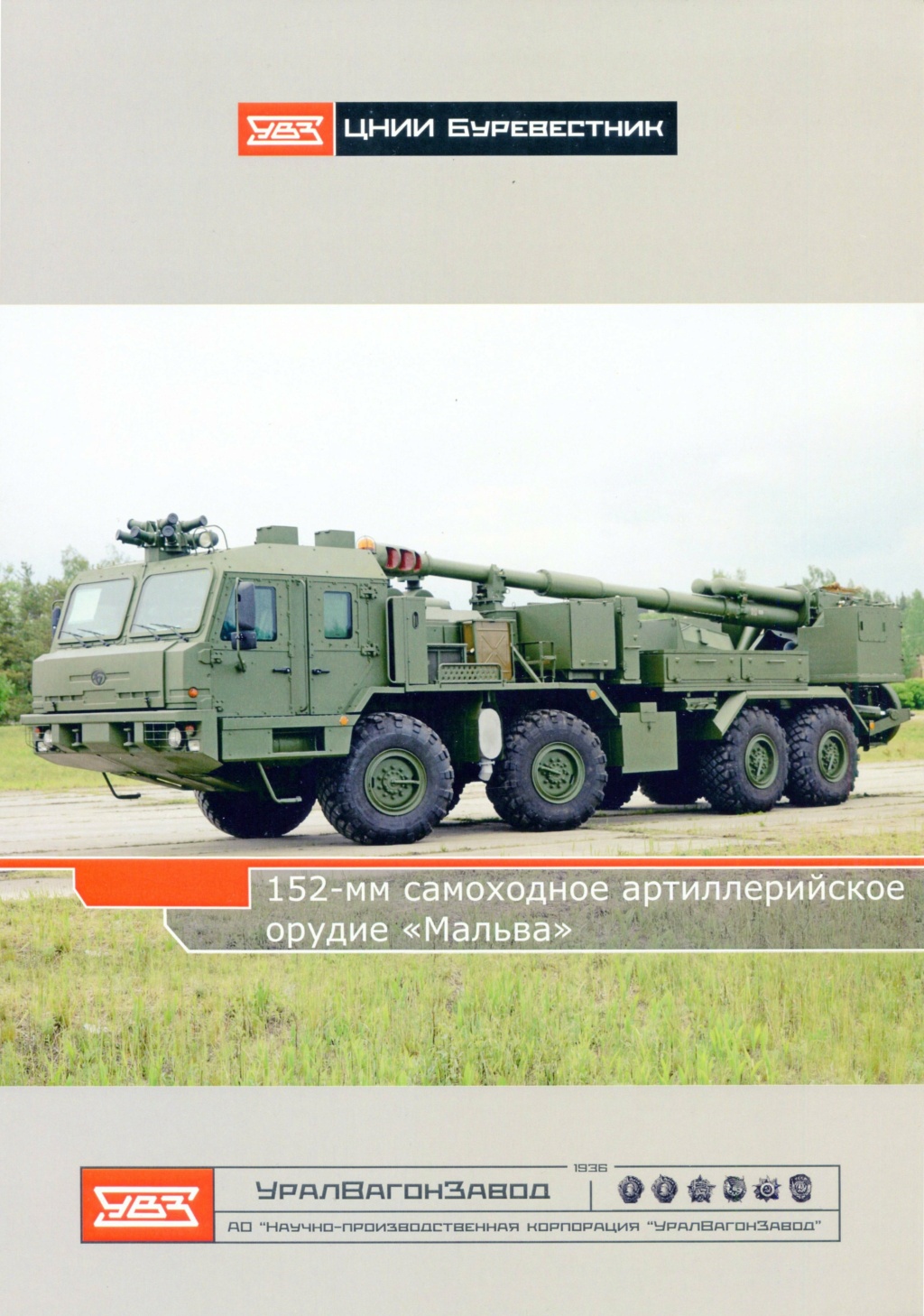 Tests of the promising 2C43 Malva self-propelled wheeled howitzer will begin in the spring or summer of 2021.

This is reported "News" with reference to the Ministry of Defense.

According to the publication, the newest self-propelled gun had to pass factory tests by the end of 2020 with firing, currently the ACS is undergoing a stage of correcting the shortcomings discovered during the tests. After the stage of fine-tuning "Malva" will start testing.

ACS 2S43 "Malva" is being developed by the Central Research Institute "Burevestnik" as part of the ROC "Sketch". For the first time, the howitzer was presented in 2019 behind closed doors, details of the development are not provided.

It is known that the 152-mm 2A64 cannon used in the Msta-S self-propelled guns is used as a firing component at Malva. It is possible to install an upgraded version of this gun, but the data is missing due to the secrecy of the development. The transportable ammunition of the howitzer is 30 rounds, the mass of the self-propelled guns is 32 tons.

The chassis of the Malva is the BAZ-6010-027 all-terrain vehicle with an 8x8 wheel arrangement produced by the Bryansk Automobile Plant, and not the Belarusian MZKT tractor, traditionally used in the Russian army as a platform for placing various weapons. Other details have not yet been disclosed.

As previously reported, in the framework of the R&D project “Sketch” a whole flower garden is being developed, which, in addition to “Mallow”, includes 120-mm Flook SAO on the Ural-VV chassis, 120 mm Arctic Magnolia self-propelled guns on the chassis of a two-link tractor DT-30MP and 82-mm mortar "Drok" on the chassis "Typhoon-VDV".

Interesting in those photos above it uses what appear to be mortar base plates at the rear rather than a conventional spade...

Wonder if that means it can brace the vehicle on uneven ground or firing on a slope with perhaps one pushed down further than the other on a slope to level the vehicle when firing...

Interesting use of existing technology that already works.
George1 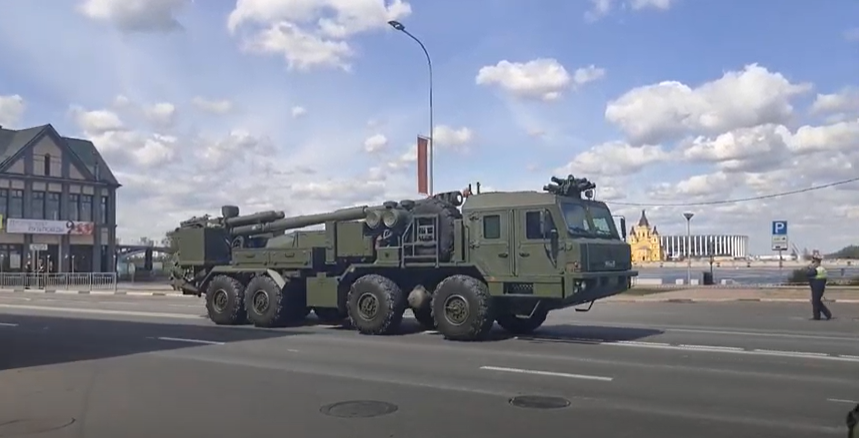 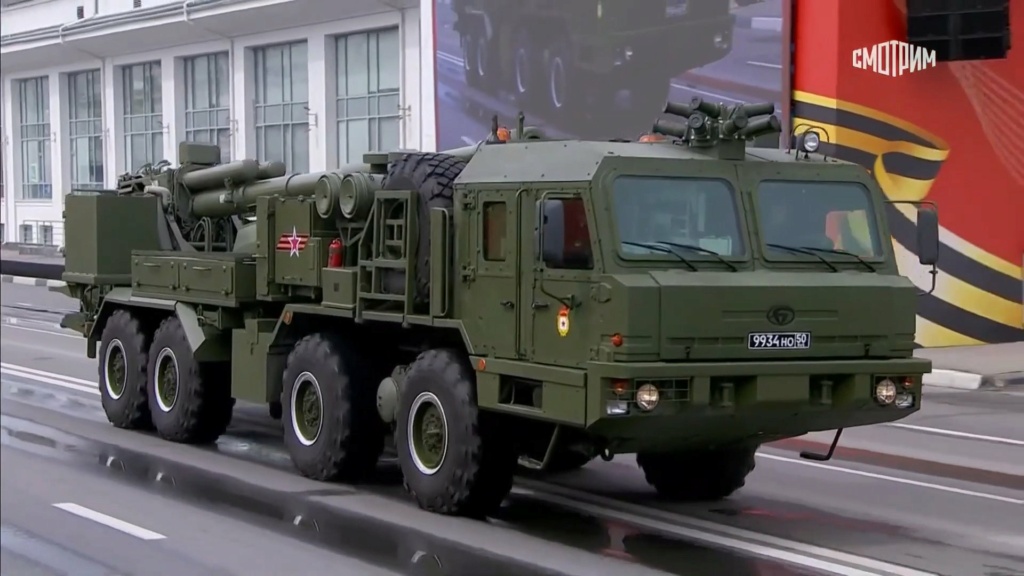 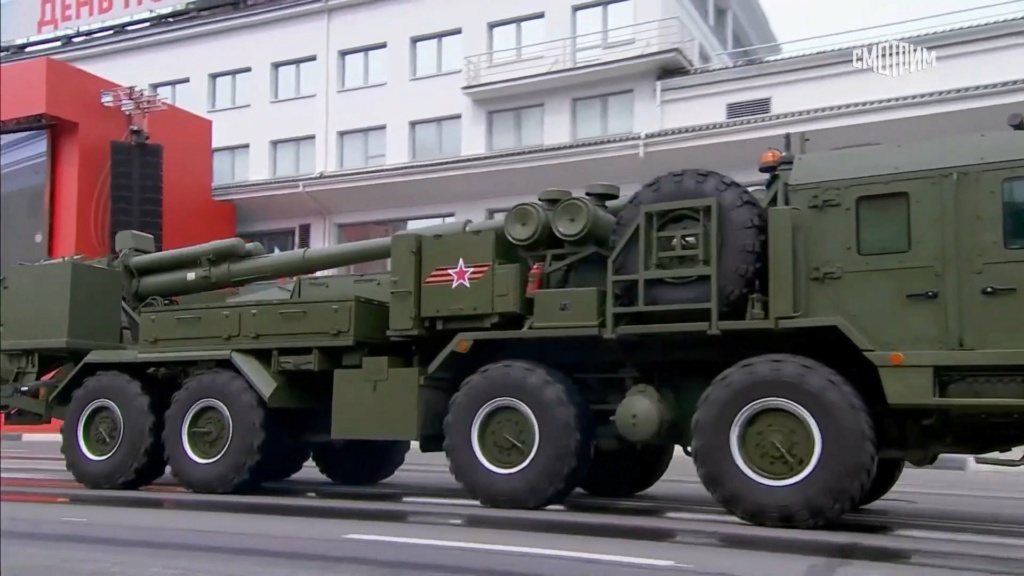 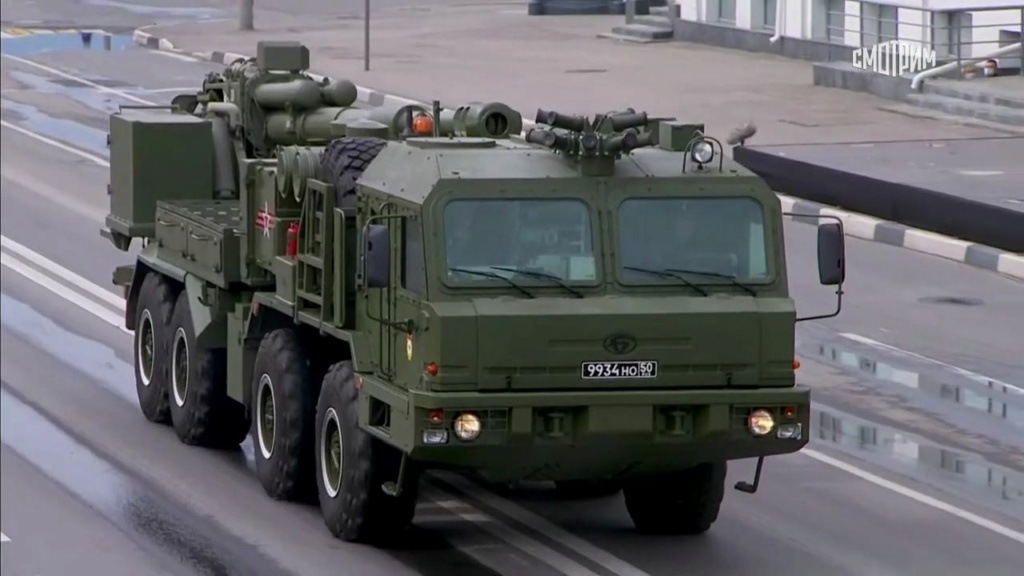 What is the logistical difference between this truck and lighter one like Kamaz?

Those rear spades actually look like mortar base plates... specifically 120mm mortar baseplates, which is interesting because when properly bedded they should be able to absorb recoil in any direction.... obviously when put in place the mortar can fire in any direction and the baseplate is designed to direct the recoil energy into the ground.

In theory that should mean with those rear mounted baseplates the gun should be able to be pointed in any direction with the main recoil going into the ground via these two baseplates without needing to dig out a spade and relocate and turn to fire in a different direction.

That is rather clever...
Russian_Patriot_ 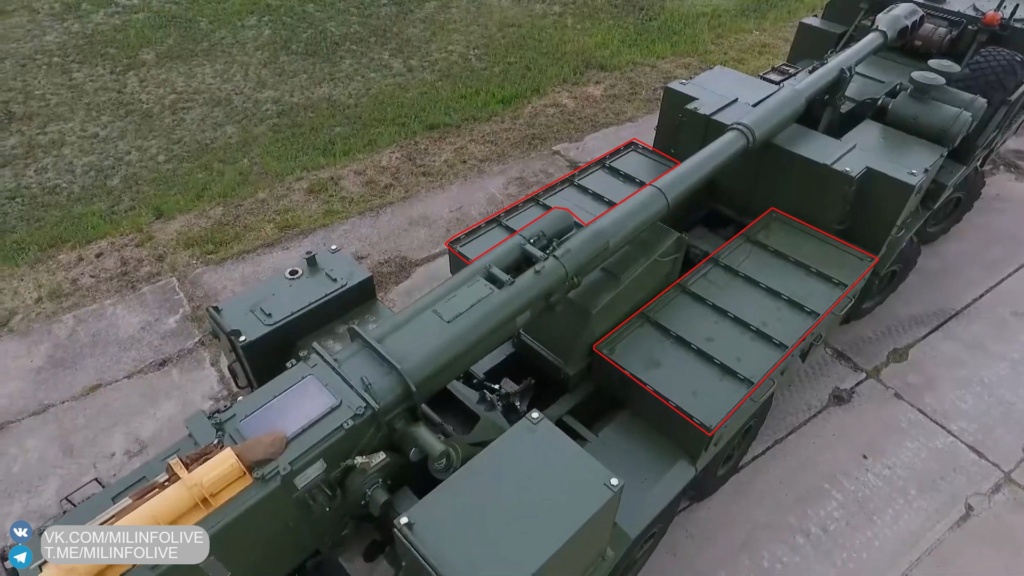 State tests of the 152-mm self-propelled artillery gun 2S43 "Malva" are planned to be completed in 2022. This was reported by the press service of Uralvagonzavod.

This video shows Malva firing.
No auto-loader but it does have an auto-rammer


Edit: 4* 2-part rounds in the ready box to right of the breech.
I'm a bit confused about the loading cycle

Its cut up probably intentionally, seems that after firing the big guy goes up, grabs a propellant casing & passes it down (person puts it on a tray to left/into the rear?) then he places a projectile on the tray which is auto-rammed as the crew clear away (propellant is rammed from wherever the guy put it? Then fires).
Guy on the left is checking the lay/elevation/fire orders I presume.

You don't actually see what happens but I suspect it is a three man operation where one jumps up on the right hand side where the ammo is stored and one on the left side and one stands on the ground between them. The guy on the right grabs a live shell and passes it down to the man on the ground who passes it to the guy on the left who loads it in the left side ready to be rammed by the autorammer up into the chamber while the guy on the right hand side has grabbed the propellent case and placed it into a feed tray beside the rammer (but from the other side to the projectile)... the round is rammed and then the propellent charge is rolled into line with the chamber/bore and it is rammed in behind the projectile and they all run to the protection of the small building for firing...

Would assume the gun auto relays after each shot for accuracy and rate of fire.
Sponsored content