It looks it work. Saudi Vestel Karayel drone is shot down.

The drone is quite compact and should have smaller IR signature than other drones like TB2.

I'm impressed that an old r-60 missile can down it.

Russia should start exporting more of modern IR missiles. They should also create a system that uses r-60/73 missiles.

Sosna-R and the 57mm AA system will be very deadly. Impossible to jamm or evade once in the engagement zone.

Countries like Armenia or Syria should ask for such system.

Radar system often give their position away to enemy RWR.

I'm impressed that an old r-60 missile can down it.

We don't know if it did. Might be completely unrelated.

Also there is video out there claiming that a 2K12 Kub medium-range SAM system belonging to Houthis was destoyed in airstrikes around Marib.

spriters
@neccamc1
·
58m
Saudi Aramco announces an increase in gasoline prices, starting from this day,
All these successive doses because of their aggression against Yemen, and this confirms that the Yemeni strikes have hit Ras Tanura oil,

US Secretary of State Blinken: We are committed to defending Saudi Arabia if it faces an urgent external threat.
RTN

They are not Saudis. Mostly air force officers from muslim countries.

They are not Saudis. Mostly air force officers from muslim countries.

What other muslim country operates f-15 ? They are saudi pilots trained by US for years. They are very competant on f-15.
RTN

Isos wrote: What other muslim country operates f-15 ? They are saudi pilots trained by US for years. They are very competant on f-15.

Re training, if Saudis are indeed so very well trained why do they keep on signing agreements with muslim states like Pakistan to deploy their military in Saudi Arabia?

Isos wrote: What other muslim country operates f-15 ? They are saudi pilots trained by US for years. They are very competant on f-15.

Re training, if Saudis are indeed so very well trained why do they keep on signing agreements with muslim states like Pakistan to deploy their military in Saudi Arabia?

How would arab states train their f-16 pilots on f-15 that they don't operate ?

Saudi arabia has pilots for their f-15 and they were trained gor years on f-15. Why would they pay untrained pilots to fly it ?

They make agrerments with other states to deploy their soldiers their to have a "coalition" and not be alone in Yemen. That helps at UN. They certainly won't let a pakistani pilot trained on f-16 fly a f-15 that he never touched.

spriters
@neccamc1
·
5h
The Zulfiqar missile, about which you have heard a lot during the past months, has repeatedly targeted the depths of Saudi Arabia with a range of more than a thousand kilometers and has dealt heavy blows to the enemy.

Isos wrote:How would arab states train their f-16 pilots on f-15 that they don't operate ?

Did I suggest that Arab states were training their pilots on F-15s that they never acquired? I said Saudis import Air Force officers are from muslim countries. If they are not trained to fly F-15 or Typhoon or whatever fighter jets the Saudis operate they are trained for that in Saudi Arabia.

Being experienced pilots they need only a few months of training compared to years of training that a rookie pilot would need. Furthermore, locals of most prosperous arab states hesitate to join the military especially in active combat role.  That's why these states rely on immigrants for almost everything.

GEROMAN -- I fell in love with #NATO -
@GeromanAT
·
13h
#Yemen There are now 4 active fronts
'Houthis' made only progress in #Marib
but had to retreat on the other 3 fronts
#Taizz
#Hajjah
#Hodeidah
-
In #Sanaa several air attacks by Saudi air force the last days - also massive Saudi & UAE air support on the other fronts. 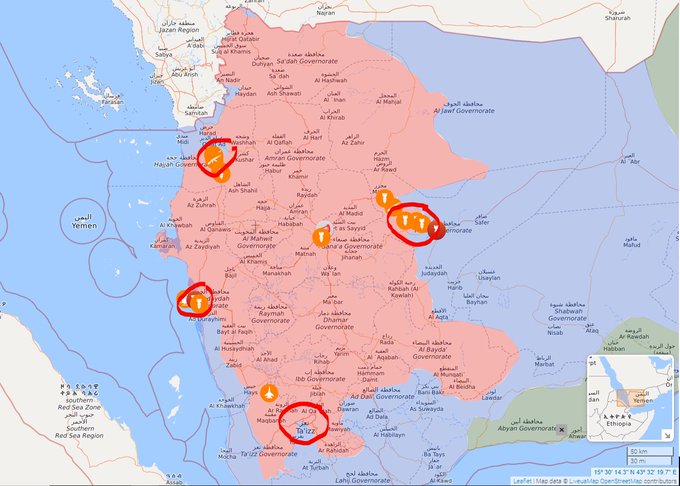 Looks like the Houtis are trying to cut of Marib with a flanking move. 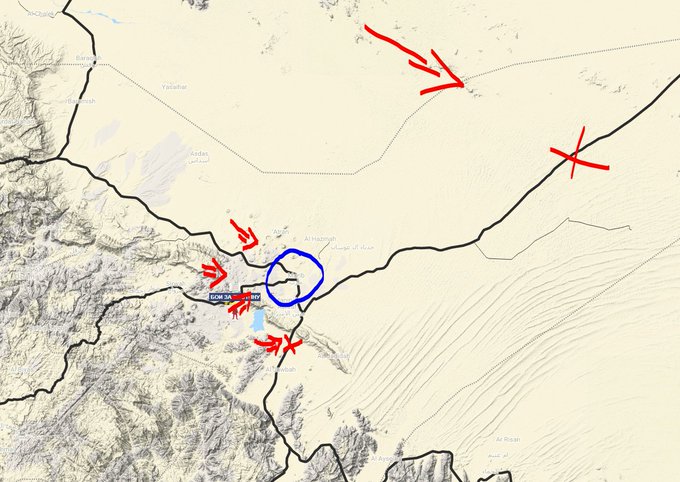 spriters
@neccamc1
·
1h
Large reinforcements for Sana'a enter the front line
The signs of a fall are approaching, with a great surprise, that turns the balance into a historic victory ...
Marib - around the corner ...

Whilst these guys are the real heroes

Perhaps one of his targets

That is quite an exit wound...

Been a while since the last update. Some #Houthi advances from Madghil axis. 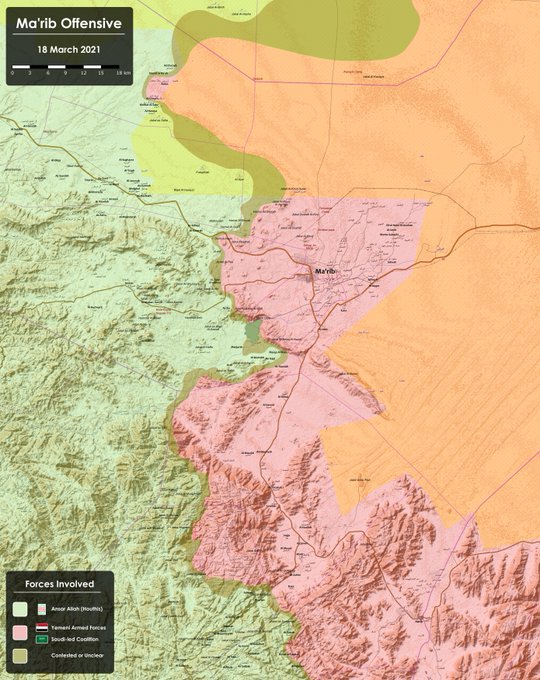 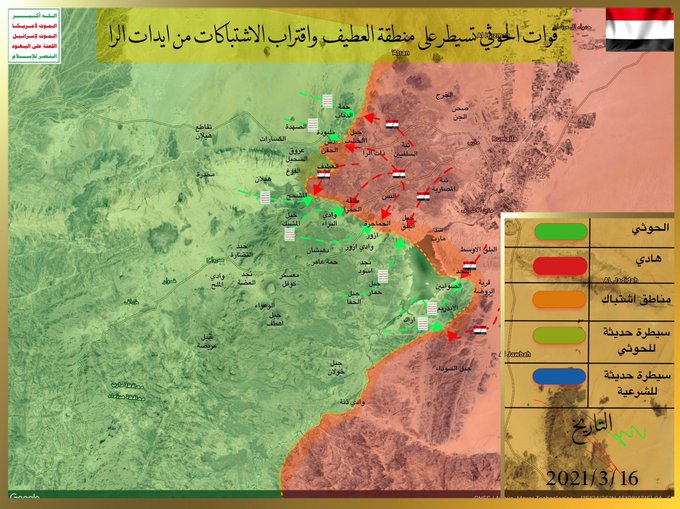 Is it just me or is the Marib front pretty much stagnant?

Have been reading BREAKING!!1 reports from pro-Ansarallah accounts for 4-6 weeks now but according to the maps they have barely gotten any closer to the city. They were 7-10 kms away back then and still seem to be at that distance. Same for the road that leads to the city from the south.

Have also been reading 'reports' on the test use of TB2's in and around Marib, for what it's worth

elconquistador wrote:Is it just me or is the Marib front pretty much stagnant?

Have been reading BREAKING!!1 reports from pro-Ansarallah accounts for 4-6 weeks now but according to the maps they have barely gotten any closer to the city. They were 7-10 kms away back then and still seem to be at that distance. Same for the road that leads to the city from the south.

Have also been reading 'reports' on the test use of TB2's in and around Marib, for what it's worth

You are correct. This front is the battle for control of Yemen, when the Saudis lose it it is effectively over. Hence the slugitoutfest.

As the center of Yemen oil and gas, Marib is absolutely vital so both sides are putting everything they can into the front. As a consequence ground is changing hands many times with high ground especially valuable due to the use of traditional eyeballs as a major source of targeting data, in what is a fairly low tech fight over very rough, hilly, desert countryside.

The Saudis are roping in every mercenary that they can pay from all over the ME and east Africa, so when a new batch arrive they have a short lived success. There are rumours that several hundred Syrian terrorists are on their way. But it is only the Yemeni Army/Houtis that are fighting for their country. Most if not all of the local Marib tribes seem to have done pre-deals to try to ensure that the city is not destroyed.

The Saudis have their fighter bombers which they use a lot of, sometimes hitting their own troops with co-ordinates supplied by 'traitors/heroes'. Their Apaches are conspicuous by their absence, perhaps due to the MANPAD danger. Their drones are regularly shot down.

The Saudis agree they got hit.


spriters
@neccamc1
7m
Two hours ago, the Yemenis announced the attack of six explosive drones on the Aramco facility in Riyadh.

Saudis usually boycott news of these attacks; Unless the damages are so great that they cannot be concealed.

Status-6
@Archer83Able
1h
Saudi Ministry of Energy condemns the attack on the Riyadh Aramco refinery by Houthi drones and denounces these "sabotage acts targeting the security of energy supplies."

Saudi Ministry of Energy says that the fire at the Aramco refinery is under control, no injuries or deaths, and the supply of oil and its derivatives was not affected.


spriters
@neccamc1
·
1h
The Saudis usually boycott the news of these attacks, unless the damage is so great that it cannot be concealed.

Accurate blow to Aramco in Riyadh; The voice of the Saudis came

Saudi television has reported that an official at the Saudi Ministry of Energy has condemned a drone strike on an oil refinery in Saudi Arabia.

No let up in the pressure.

spriters
@neccamc1
·
1h
In response to the escalation of the aggression and its comprehensive siege on our country, the Air Force carried out an attack this evening on the King Khalid Air Base in Khamis Mushait, with two drones, type 2K Qasef, and the hit was accurate,

Pressure could be getting to the Saudis

spriters
@neccamc1
·
1h
Saudi Arabia calls on the countries of the world to stand against the attacks that target Aramco, describing it as "terrorist acts", and their impact will affect the security and stability of energy supplies in the world, not just the Kingdom.

According to sources, the Yemeni army are preparing for the strikes of Saudia on the anniversary of the launch of the Decisive Storm, in the event that Saudi planes do not stop bombing them, and oil ships are not allowed to enter, the sources said that these potential strikes will be great, and may hit the oil market in front of a real crisis, and put an end to the burning war In all cities of the country,

Note that the Yeminis are hitting refineries, presumably supplying local markets, not the crude export facilities. Plus military airfields etc

spriters
@neccamc1
·
17m
Contrary to the Saudis' claim, the Yemeni army's drone strike on a refinery near the Saudi capital on Friday morning caused severe damage and effectively shut down the Aramco Riyadh refinery.

Of course, it seems that the Yemenis do not intend to completely destroy the facilities and are only sending warning signals to Riyadh that they are open to attacking oil, gas, petrochemical facilities, as well as power plants and other vital and important facilities of Saudia, and if they If they want to make a fuss in this area and attack the industrial facilities in Marib province, the retaliatory operations of the Yemenis will be painful and irreparable.

spriters
@neccamc1
·
16m
In this satellite image, published by private companies and dated March 19, 2021, you can clearly see the amount of destruction of Yemeni drones in the Saudi Aramco Riyadh refinery.


Yahya Sare'e
@Yahya_Saree
· 1h
Once again, Yemeni Air Force has struck a military site at Abha International Airport this morning with a Qasef - 2K drone  with high precision.
This targeting comes within  framework of a legitimate response to aggression escalation  and its continued blockade on Yemen  country

Aramco strike in Riyadh
Operation Yemeny army
It is the most accurate and wisest offensive, influential operation of a very harsh strategic nature that the capital of the Saudi enemy has been subjected to.
It is only the beginning of the climax of discipline