GRAPHIC WARNING, TERRORIST PROPAGANDA.
Did not know things were this bad.

Jesus shit, RIP to the Iraqi troops. Hope the Russian gov accelerates any deliveries to Iraq of weapon systems that can send these cunts flying in a dozen pieces.
flamming_python

TR1 wrote:GRAPHIC WARNING, TERRORIST PROPAGANDA.
Did not know things were this bad.

Jesus shit, RIP to the Iraqi troops. Hope the Russian gov accelerates any deliveries to Iraq of weapon systems that can send these cunts flying in a dozen pieces.

No quarter given, no quarter expected.

This is how both sides have been doing things.

But RIP to the troops. They are still the right side, and the Jihadists are still scum.
TR1

Well, have you seen any videos of Iraqi gov troops executing, whipping and doing the sort of stuff to surrendering fighters?

Personally I have not.
Viktor

TR1 wrote:Well, have you seen any videos of Iraqi gov troops executing, whipping and doing the sort of stuff to surrendering fighters?

Personally I have not.

I have and ISIS is doing what has been doing in Syria from day one. Well here is a map of territories held by ISIS 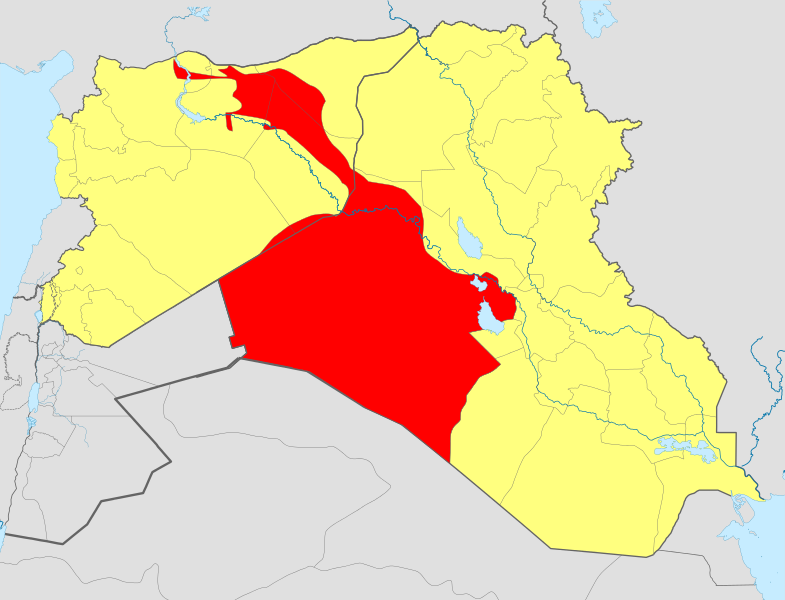 Situation is realy bad and Iraq army seems not to be able to regain lost ground. They have been recruting EVERYONE (suni, shia and all) who want to join in the fight against terrorists.

They are providing arms and money to tribes all around country. 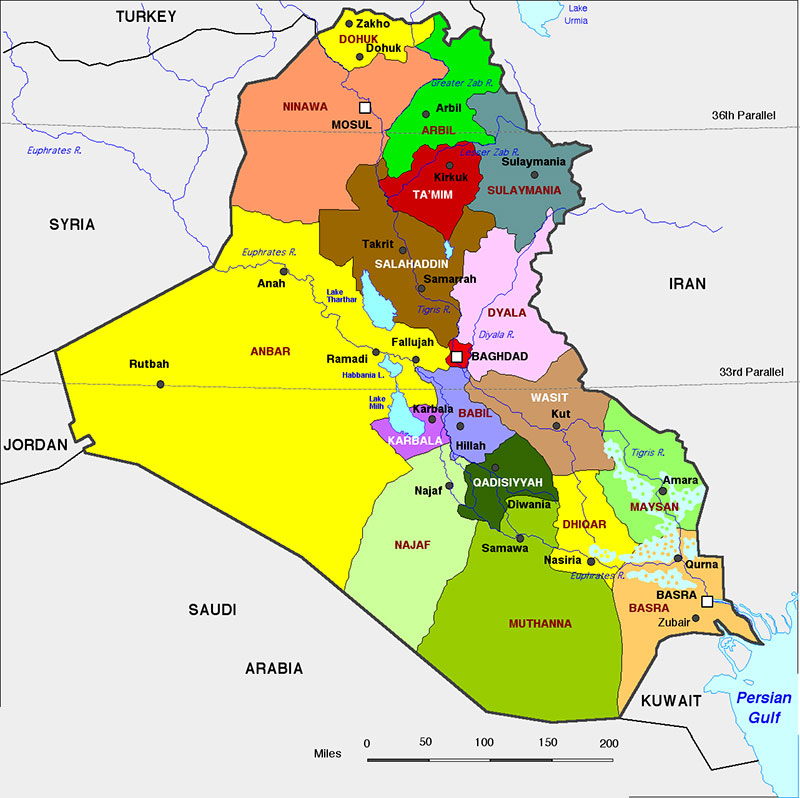 Iraq PM has repeatedly accused Saudi Arabia of supporting terrorist and providing them with money and logistic/training/equipment etc (and by it indirectly USA).

ISIS terrorist caught acknowledged that they have been trained and equiped by Saudi Army and send there to do their thing.
flamming_python

TR1 wrote:Well, have you seen any videos of Iraqi gov troops executing, whipping and doing the sort of stuff to surrendering fighters?

Personally I have not.

Either way though the Iraqis have been summarily executing each ISIS member they have come across, or so it's said. And I think the process was not too dissimilar to what we saw here.

yes. since the big prison breakout (orchestrated with the assistance of some prison guards) in abu ghraib last year, it has been the "unofficial" policy by the army not to take prisoners of known terrorists. "suspects" are still captured though. The reasons are:
-Terrorists have been butchering Iraqi soldiers since 2004 without mercy.
-The prison system is corrupt and many terrorists have been in and out of prison several times.

So now, finally, the "gloves are off" at least against captured terrorists... after 10 years of these terrorists butchering all Iraqi prisoners, they are being treated likewise.

Still the above "map" of areas "held" by Daesh is simply not true. The only area they hold is falluja and some surrounding farms. It has not been stormed so as not to inflame the sunni-arab populace any further.

And the military has not setup any filtration camps to vet the people coming out of Falluja!!! so as not inflame "feelings" of oppression amongst the population there (which openly supports al qaida!).

Still the terrorists continue carrying out attacks all over areas with a large sunni-arab population (places where they can shelter) and the Kurdistan area is still effectively a "safe haven" for terrorists for R&R.
TheArmenian

nice bit of action from the Mi35M. the IA-407s giving the target info.

how come we haven't seen footage directly from the gun camera of the Mi35s though?
medo

Only combat capable Iraqi military left by US are ISOF , special operation forces. Rest is a joke, Iraqis must return to Soviet/Russian military model that served them much better.
George1

Hundreds of militants from the Islamic State of Iraq and the Levant (ISIL) launched a major assault on the security forces late on Monday, an army brigadier general said to AFP.
Mosul, the scene of deadly clashes on Friday and Saturday, was "outside the control of the state and at the mercy of the militants," an interior ministry official said.
Soldiers and police had stripped off their uniforms and fled, and the militants used loudspeakers to declare they had "come to liberate" the city of some two million people.
Hundreds of families were seen fleeing. Some were on foot, carrying what they could, others in vehicles with their belongings piled on the roofs.
The militants seized the provincial government headquarters and the Nineveh Operations Command as well as the airport, the army general said. They also freed hundreds of prisoners from three jails.
The Turkish consulate in Mosul said ISIL fighters had captured 28 Turkish truck drivers. A foreign ministry official said Ankara hoped they would be released once they finished unloading fuel oil at a power station.
Maliki said the cabinet had decided to reorganize the security forces, arm citizens and to ask parliament to impose emergency rule. It had "created a special crisis cell to follow up on the process of volunteering and equipping and arming", the premier said. State television said parliament had received a joint request from Maliki and the president's office to declare a state of emergency.
Predominantly Sunni Nineveh province, of which Mosul is the capital, has long been a militant stronghold and one of Iraq's most dangerous areas. ISIL, the most powerful militant group in Iraq, is also a key force in the rebellion against President Bashar al-Assad in neighboring Syria.
In April, it launched a campaign in Syria's Deir Ezzor province, which borders Nineveh, aimed at carving out an Islamic state. The group said it was behind the assault in Nineveh in messages on Twitter. Mosul is the second city to fall from government control this year. Anti-government fighters also control Fallujah, west of Baghdad.
UN chief Ban Ki-moon was "gravely concerned by the serious deteriorating of the security situation in Mosul," his spokesman said. ISIL militants also took a string of mainly Sunni Arab towns in ethnically mixed Kirkuk province, which borders Nineveh, police Colonel Ahmed Taha said.
Violence also struck other areas of Iraq on Tuesday. In Baquba, two bombs killed 20 people near a funeral procession for a slain teacher. And in Baghdad, 11 people died in attacks. Violence is running at its highest levels since 2006-2007, when tens of thousands were killed in clashes between Iraq's Shiite majority and Sunni Arab minority.
Read more: http://voiceofrussia.com/news/2014_06_11/Iraqs-second-city-seized-dy-Jihadists-4220/
fragmachine

Wonder if pickups in this video are Ford made, like those shiny brand new spanking ones that FSA have.

ISIS also capture Mosul airport, where they capture US UH-60 Blackhawk and OH-58 Kiowa helicopters. If ISIS have any pilots in their lines, they have their own air force now.
George1

Absolutely. I personally doubt ISIS capture US helicopters, but who knows, if CIA doesn't have their secret teams in Iraq. I think we will have to wait for actual confirmation, that ISIS capture helicopters.
nemrod

The terrorist organization of ISIS supported by the US/EU and Petro-Dollar States of the Gulf seized heavy weaponry from the Iraqi army storage.
Including Soviet made Kub anti air systems. The missiles according to several reports have reached the Syrian soil, no reports of ISIS taking control of any radars, only the missiles and the launch platform.
This shameful act of silence from the international committee toward their supporting states makes the international committee nothing but a partner of ISIS.
We will use any necessary force to protect our homeland, and maybe more. The Syrian Armed Forces and The Iraqi Armed Forces are now one, fighting the same war.
Our battle with ISIS haven`t started yet, for strategic reasons that we will not disclose at the moment. But when that battle start, NO ONE should lecture us about human right, because those terrorist scum lost every right to be treated like humans when they came to our homeland, and we will deal with them with whatever necessary force we think is suitable.

And Algeria and Egypt; President Sisi kicked Morsi out of power because he (Mohamed Morsi) wanted Egypt to become a Islamic State and because he wanted the Egyptian army to attack Syria so that the Jihadists could win!
Russian Patriot

Iran is already arming Shiites but ISS is Sunni so that why the civil started during US occupation and continues after ...
mutantsushi

Exactly what I was thinking, whether Egypt will get involved.
It is scary that I haven't heard of these weapons depots being bombed, leaving them in AQ hands.
A good amount sounds to have been abandoned where it was deployed,
but at least the concentrations in depots could have been efficiently destroyed from air.
TR1

What a mess.
Viktor

What they need is 5000 armour and 200 000 highly motivated, disciplined and trained troops. Only than they can consider air strikes which on their own wont solve anything.
arpakola

The Iraqi army regained its control over the city of Tikrit after crushing ISIL terrorists, Iraqi media outlets reported.

The Iraqi troops are still chasing ISIL terrorists in the province, according to the media reports.

The Iraqi defense ministry issued a statement in which it asserted that the army regained control over Tikrit and vowed to strike ISIL terrorists in Mosul in order to impose the governmental authority in the city.

ISIL militants had taken control of the Iraqi city of Tikrit and freed hundreds of prisoners on Wednesday, police said.

According to AFP, Iraqi security forces repelled an assault by militants Wednesday on the highly sensitive city of Samarra.
Sponsored content