Vladimir79 wrote:At 2.5 tonnes I would say it is not an effective weapon.  It needs to be launched in saturation attacks to overwhelm the enemies defences.  A lighter missile that can be carried in greater quantity would be more effective.

Against pakistani navy it is more than enough. It also has land attack capability that very little countries can defend against.

India also operates kh-31 that has similar range so they can use them to overwhelm while brahmos take care of big ships.

But it seems they mainly plan to use it against land targets where air defence systems are affected by mountains. Their ships carry more kh-35 than brahmos.

Remember also that Argentina managed to destroy 2 big UK ships with only a stock of 4 or 5 exocets. 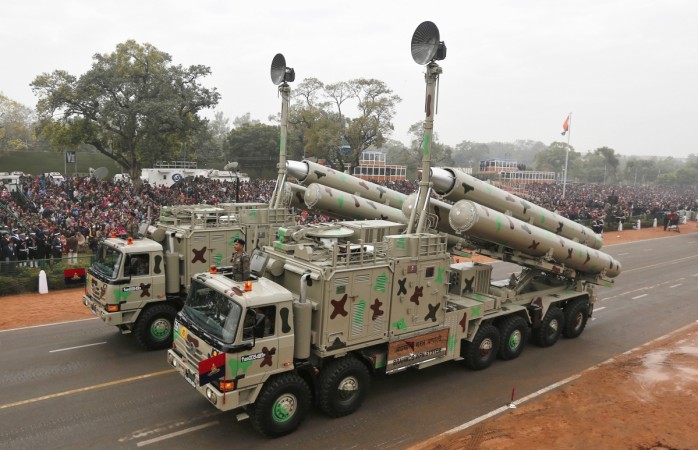 For the purchase, it is planned to allocate 1350 crore rupees (about $ 189 million), the delivery should be made within two years.

Each NGMMCB battery should include two three-charged self-propelled launchers with BrahMos missiles, a mobile command post and two mobile radar systems equipped with Scanter radars from Danish company Terma (radar assembly will be carried out in India by Tata Nova, a subsidiary of Tata Advanced Systems Division Tata groups). Battery facilities will be implemented on Tatra chassis assembled in India. Also, each battery will include air defense systems as part of one mobile radar for detecting air targets and two vehicles with portable air defense systems.

It is reported that both batteries will be deployed in the Mumbai area.

This is the first land-based BrahMos purchase for the Indian Navy. Until now, ground-based missile systems with BrahMos missiles have been supplied only to the Indian ground forces, where they are armed with three missile regiments (five batteries each) and it is planned to equip one more ..

The Indian Air Force test fired the air launched BRAHMOS today from a distance of 300 kms. Interestingly the target destroyed was a ship.

Pity the Su 30MKI can carry just one BRAHMOS

Brahmos NG should come in 2021-2022. They will be able to carry 3 of them. But not all MKI are upgraded for Brahmos use.

Brahmos NG is a much better design since it has the same caracteristics but with half the size.
Sujoy

Isos wrote:Brahmos NG should come in 2021-2022. They will be able to carry 3 of them. But not all MKI are upgraded for Brahmos use.

Brahmos NG is a much better design since it has the same caracteristics but with half the size.

Brahmos NG will not be ready for induction before 2024. IAF recons that Su 30 MKI can carry 3 Brahmos NG and the Rafale can carry one.

The Super Sukhoi program is still on hold due to the high up gradation cost involved (approx US$ 5 billion ) and the Su 30 MKI desperately need more advanced EW systems.

That's what they said. Smaller payload, so it's possible that it will travel faster. But several tests will have to be carried out.

Right now the Kh-35 is being tested because it had some propulsion related problem.

Notice that the actual hit is not being shown (link below). If the Indian Navy shows the angle of hit it would make it easier for counter measures to be made.

India announced information about the upcoming signing of a contract for the purchase of a batch of modernized BrahMos missiles for the naval forces. According to published data, the Indian Navy will acquire 38 anti-ship missiles of this kind.

Indian modernization "BrahMos" primarily consists in increasing the range of destruction of targets. Indian sources write that after updating the rocket, it is capable of hitting targets at a distance of 450 km. This is about 50 km more than the previous version of the same rocket.

Named and the amount that will cost both the entire contract and, accordingly, each of the BrahMos missiles. For the purchase of 38 supersonic missiles for fleet Indian Defense Ministry is ready to spend 18 billion rupees. Accordingly, one modernized BrahMos rocket will cost the Indian budget approximately Rs 473,7 million (about US $ 6,5 million).

For comparison, an updated version of the American Tomahawk missile costs about $ 1,6 million. That is, the Indian version of the sea-based cruise missile is 4 times more expensive, according to the official data on their cost.

The contract has not been signed yet, but, as the Indian information service ANI writes, "it is close to being signed."

In this regard, in India there are regular questions to the military department. The main one is why the cost of the rocket after modernization suddenly turned out to be so high, "4 times more expensive than the Tomahawk"?

Recall that initially the BrahMos missiles were developed jointly by Russia and India. Now India is trying more and more actively to use its own capabilities for the production and modernization of such cruise missiles.

If they decided to make their own Tomahawk and produce it locally it would probably cost 4-5 times more than an American missile.

Do you personally think you could make a TV or a Car from scratch cheaper than you could buy one off the shelf from a company that makes them in enormous numbers in big factories?

Remember you have to build your own factory... they are not just making one Brahmos... but plans for making less that 40 will make them more expensive... they are almost hand making them in this case... small wonder they are not cheap.

And ultimately how much cheaper is a subsonic missile that most modern air defence systems can shoot down as shown in Syria, compared with Brahmos which would be much much harder to shoot down.

The effectiveness of such missiles are also utterly dependent on having the required constellation of GPS satellites providing positional updates. A very expensive investment and one that both the US and Russia are not that keen on sharing to third parties without being well compensated for it.

The missile was test-launched off India’s western coast.

In early December, India successfully tested the airborne version of the BrahMos missile, launching it from a Su-30MKI fighter at the Chandipur proving ground in the eastern state of Odisha.

This is interesting....Pakistan says India fired a BRAHMOS/Cruise missile inside Pakistani airspace but Pakistan Airforce intercepted it using HQ-9.

If there's any good take-away, this means Pak nukes are not on hair-trigger. They didn't launch on detection. Unless there is more to this of course.

Highly intriguing though. Why did India suddenly lauch a missile inside Pakistan?

The effectiveness of such missiles are also utterly dependent on having the required constellation of GPS satellites providing positional updates. A very expensive investment and one that both the US and Russia are not that keen on sharing to third parties without being well compensated for it.

The are radar equipped missiles so if the target is a ship or large building inertial navigation should be accurate enough to get within 50km of the target... and once inside that range the radar should be able to find and get a target lock on a significant target if it is there.

More important than GPS or GLONASS is high accuracy digital radar based maps of the territory you expect to be operating in.

Over water it is not important or useful, but major features like river deltas and cities and major bridges can be clearly seen in radar images and used to update navigation and rezero your precision.

For instance a launch from a submerged submarine of a 2,000km range cruise missile... the sub will likely know fairly precisely where it is when it launches so the missile will be reasonably accurately positioned at flight, but over time the accuracy will become blurred.... say it flys 1,000km over open water and over that flight time... say it cruises at medium altitude and 500km/h to save fuel and maximise range so when it gets to the coast it is 20km away from where it is supposed to be... when planning the attack the digital map loaded in to the missile will use waypoints and recognisable features to update the navigation system... it can't help much in open ocean but when it reaches the coast it can quickly look at the radar image of the coastline and examine its digital terrain map to locate with very good precision where it actually is... obviously made easier if there is a port or river delta or lighthouse or distinctive island or land feature... it can then return to a very high level of accuracy in its positioning and return to its trajectory and waypoint navigation and find and hit the target... waypoints at sea wont help, but waypoints on land can be fixed features used to ensure accuracy of navigation is very good... a fork in a road or river might be useful except if there is a drought and the river has no water...

For a weapon like Brahmos the concept is just the same, but it moves a lot faster...

Regarding the missile launch I am sure there will be all sorts of hair brained claims... it was a Pakistani spy on an Indian platform giving them a Brahmos missile to look at, or it was a counter spy mission that India launched intentionally with a fake designed missile with design faults built in to it they want Pakistan and China to copy... but maybe it was just a mistake... they happen most often so also are most likely... which is what the spies on both sides are counting on you believing...

Sujoy wrote:If there's any good take-away, this means Pak nukes are not on hair-trigger. They didn't launch on detection. Unless there is more to this of course.

Highly intriguing though. Why did India suddenly lauch a missile inside Pakistan?

Because the Pakistani president was mouthing off against India a few days ago, while denouncing the EU letter that demanded Pakistan to condemn Russia

Maybe Indian intelligence saw some kind of threat or provocation in the making. The missile might have been a warning shot 'we know what you're up to'. Or it may have been something else. What it wasn't - was accidental.

In general the world is going to destabilize now.
Sponsored content