I think this Spitsa combat module have one interesting thing, which is nowhere described. On the right side of the gun, there is a big box in front on which there is interesting rectangular plate. Is there posibility, that they instal radar there, like Fara-VR short range battlefield surveillance radar? It have 10 km range and could detect soldiers at range of 4 km and tanks at 8 km and could be used for aiming the gun.

I guess it´s a small version of the antenna on the front of the 2S35 turret. Could be used to program shells even in flight.

In one of the videos on the 2S38 thread one of the guns fires and a big flat sheet metal plate folds up so the empty shells can fall out over the top of the vehicles armour, so it might already be doing something like that unfortunately... but of course there is no reason why they can't fit other flat screen radar arrays, many of which they have already developed for their artillery vehicles to track outgoing rounds trajectories to make sure they are on target and to correct fire if they are not.
Hole 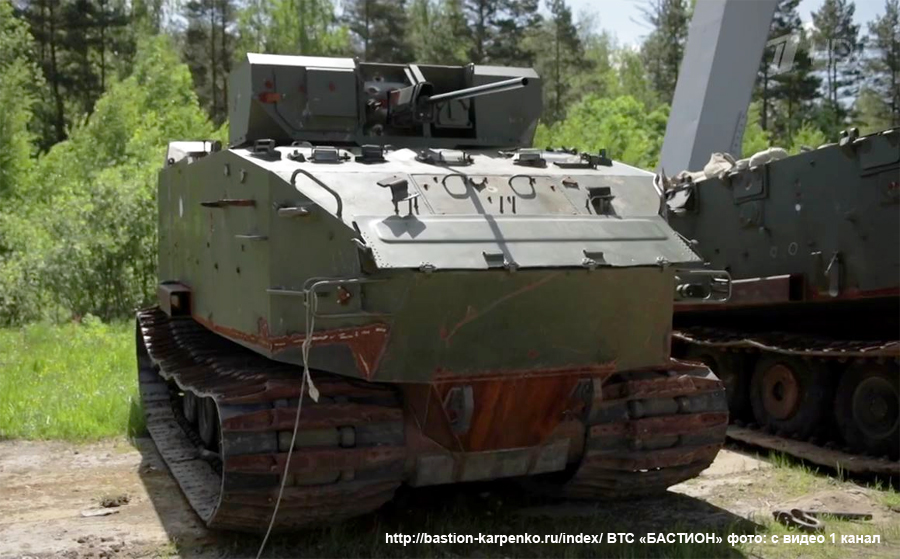 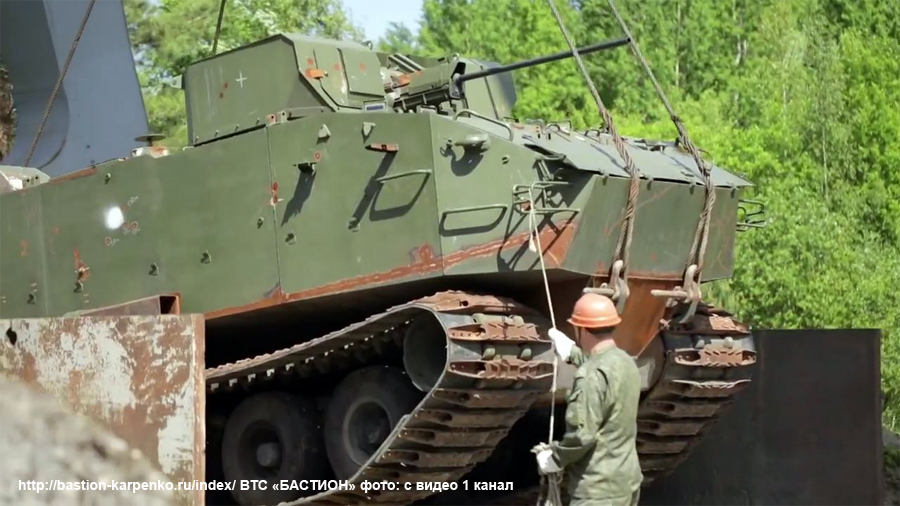 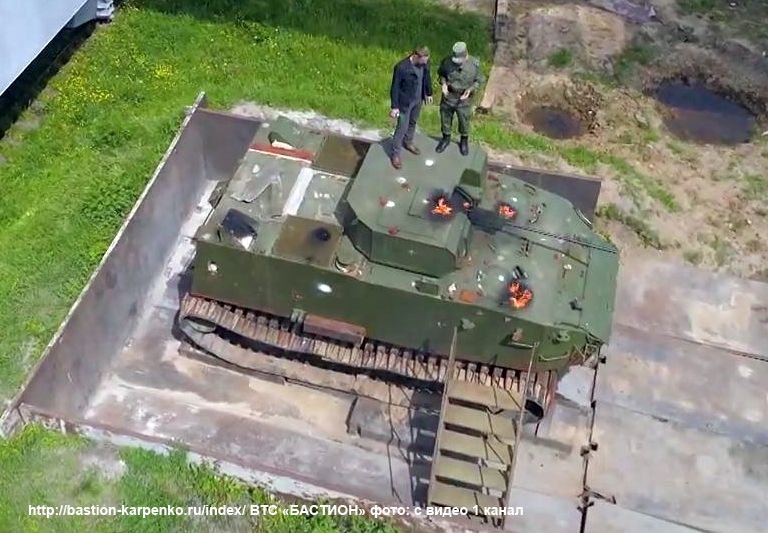 So this is the frontal part of the new DT-BTR vehicle, at least a prototype. 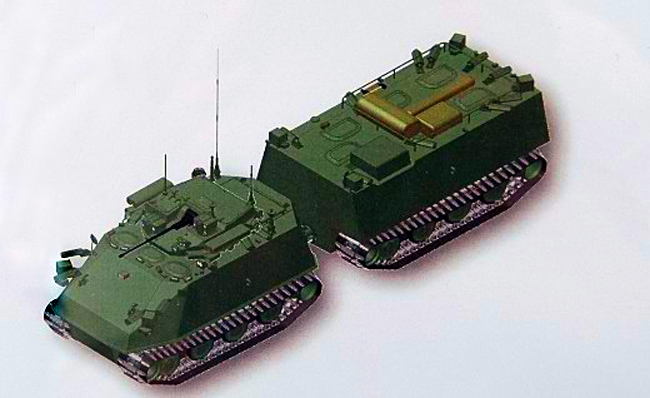 The next episode of the Chasovoy TV show (Channel One) shows the tests of the promising arctic two-link armored personnel carrier DT-BTR "Arktika" at the range of the 38th Research Institute of Armored Weapons and Equipment of the Ministry of Defense of the Russian Federation. 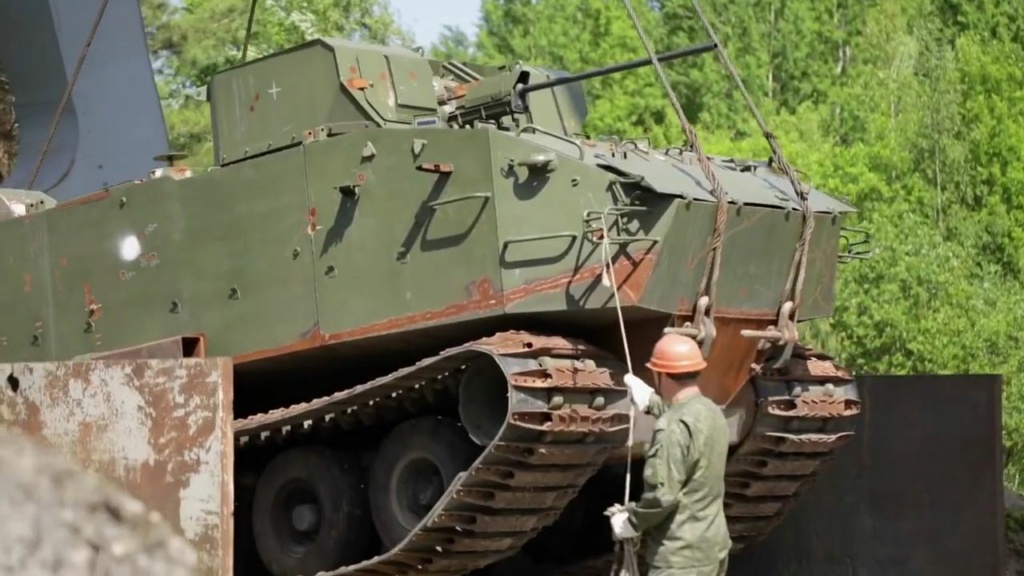 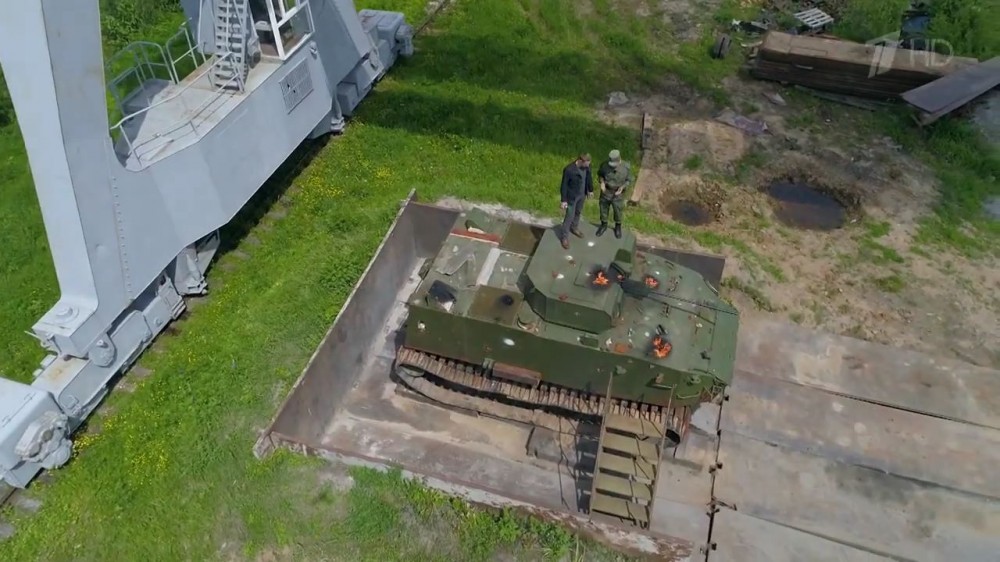 The universal combat module "Okhotnik" developed and manufactured by NPO Elektromashina of the Uralvagonzavod concern has successfully passed qualification tests and has been put into mass production. The combat module will be presented at the Army-2021 international forum.

In this version, a stabilized remote-controlled platform is in demand in the military for various purposes. Recently, a series of five "Okhotniks" was shipped to the Remdiesel enterprise for installation on Typhoon-K armored vehicles.

"In 2020, five wheeled armored vehicles Typhoon K-53949 with combat modules "Okhotnik" took part in the parade on Red Square. This year, the "Elektromashiny" products for these vehicles were delivered after a number of improvements, in particular, a new Russian-made machine gun was installed on the combat module, which was created specifically for robotic complexes. Thanks to the modernization, the efficiency of hitting the Okhotnik on the target increased by 20-30%" – said Ivan Korolkov, Deputy General Director for Special Equipment.

Also in 2021, the serial BM Okhotnik will be delivered to the UKBTM prototype vehicle and to the production equipment of several other Russian enterprises. The versatility of the module allows it to be used on special equipment of various branches of the armed forces, including land and engineering, from which applications for the Okhotnik BM have already been received. 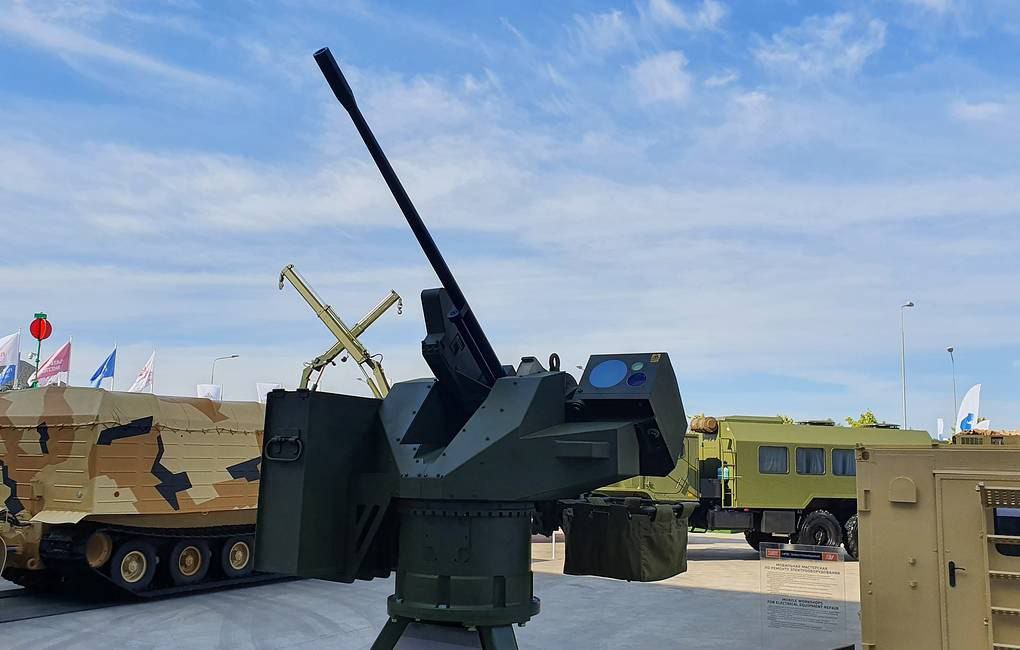 in particular, a new Russian-made machine gun was installed on the combat module, which was created specifically for robotic complexes. Thanks to the modernization, the efficiency of hitting the Okhotnik on the target increased by 20-30%"

That is interesting... a new machinegun. When they replaced the NSV utos 12.7mm HMG with Kord they improved the design to increase accuracy... I wonder if this is Kord or a further improvement?

Can't see them considering Kord to be a new HMG these days so a newer design?
PapaDragon

GarryB wrote:...Can't see them considering Kord to be a new HMG these days so a newer design?

There are ergonomic requirements and compromises for human operated weapons

True, but for mounted use a Kord or even an older Utes or DSHkM could have its human interaction bits removed (like pistol grips or spade grips and triggers and any stocks) and just have a cable with a solenoid firing mechanism for robot or vehicle mounts with no human interaction.

I suspect they have optimised the gun design for something that will never be bipod operated or carried around a battlefield by a human or two so the mass and design of the barrel can be optimised for sustained fire and perhaps even water cooling (though looking at the image perhaps not the latter) and a mechanism and ammo feed system designed for inside a vehicle mount.
George1

Known new designations GABTU for new and modernized types of tracked infantry fighting vehicles and vehicles based on them (according to the web resource otvaga2004.mybb.ru):

If they fucking put super modern 57mm cannon equipped turrets onto BMP-2 there should be mass purges.
George1

"Epocha" is a further development of "Bumerang-BM" 30mm or the same??
flamming_python

Sounds like a good way to test them tbh

Besides, it's all part of commonality. If the new prospective turret can be equipped on both a Kurganets, or a Bumerang - and a legacy platform, then that should be taken advantage of to achieve economies of scale.

The up-gunned Epoch turret retains the zero hull penetration of its 30 mm variant: According to the press release of the Ministry of Defense of the Russian Federation, "the latest B-19 combat vehicle with the Epoch combat module is equipped with a 57-mm automatic cannon, Kornet ATGM launchers and a new Bulat guided missile system with small-sized missiles to destroy firing points and lightly armored enemy equipment. A special feature of the combat module "Epoch" is the presence of an automated search system, recognition of enemy objects, their support and preparation and issuance of proposals to the crew of the combat vehicle for the simultaneous or alternate use of two channels of fire damage."

So the turret can auto detect targets and allows two targets to be engaged at one time... presumably with the commander and gunner sights... so for instance the commander could lock a target and fire a Bulat or Kornet missile which would then free up the turret to be turned by the gunner to allow them to engage another target with perhaps a missile or a gun using the gunners sight while the commanders sight tracks the first target and guides the first missile with a laser beam.

So the 57mm grenade launcher is called LSHO-57.


The actions of the robotic complexes were provided by the tactical laser complex "Quarry", the capabilities of which allow detecting and suppressing optical means of reconnaissance and surveillance of tanks, other armored vehicles and small arms of the enemy."

So the robots have a system called Quarry that is a laser complex that allows them to detect and SUPPRESS optics... well that sounds like something they could use on manned platforms as well to suppress enemy snipers and enemy missiles with optical guidance like Javelin etc etc...


From the bmpd side, we recall that the designation B-19 has a variant of the BMP-3 infantry fighting vehicle, equipped with the developed by JSC " Instrument Design Bureau named after him. Academician A. G. Shipunov" (KBP, Tula) with the new TKB-973 "Epoch" (32B01) unmanned combat module.

So B-19 isn't the Kurganets BMP, it is the BMP-3 with the Epocha turret with the 57mm grenade launcher fitted.

That means the B-10 is the Kurganets with the Kord HMG small turret mount and is a BTR.
The B-11 is the BMP for Kurganets but at the moment uses the Epocha turret with Kornet, Bulat, and a 30mm cannon.
The B-12 is the BREM Kurganets vehicle (the Armata equivalent is the T-16).
So B-14 is the Kurganets with the Kinzhal or Dagger turret, which has a 57mm gun (not sure whether it is the grenade launcher or the new S-60 type gun used on the 2S38 air defence gun vehicle) plus a machine gun and two ATAKA like missiles, but seems to not have the Ataka or Bulat missiles.

So it is a BMP potential vehicle.

The B-15 is the Kurganets with the 57mm grenade launcher Epocha turret with the Kornet and Bulat missiles so the Kurganets equivalent of the T-15 BMP.

The B-22 and B-23 are BMPs based on the Berezhok turrets for BMP2 and BMP3 respectively.

So as a reminder this is the Epocha 30mm turret with Kornet and Bulat on the left and Kord small HMG remote turret on the right: 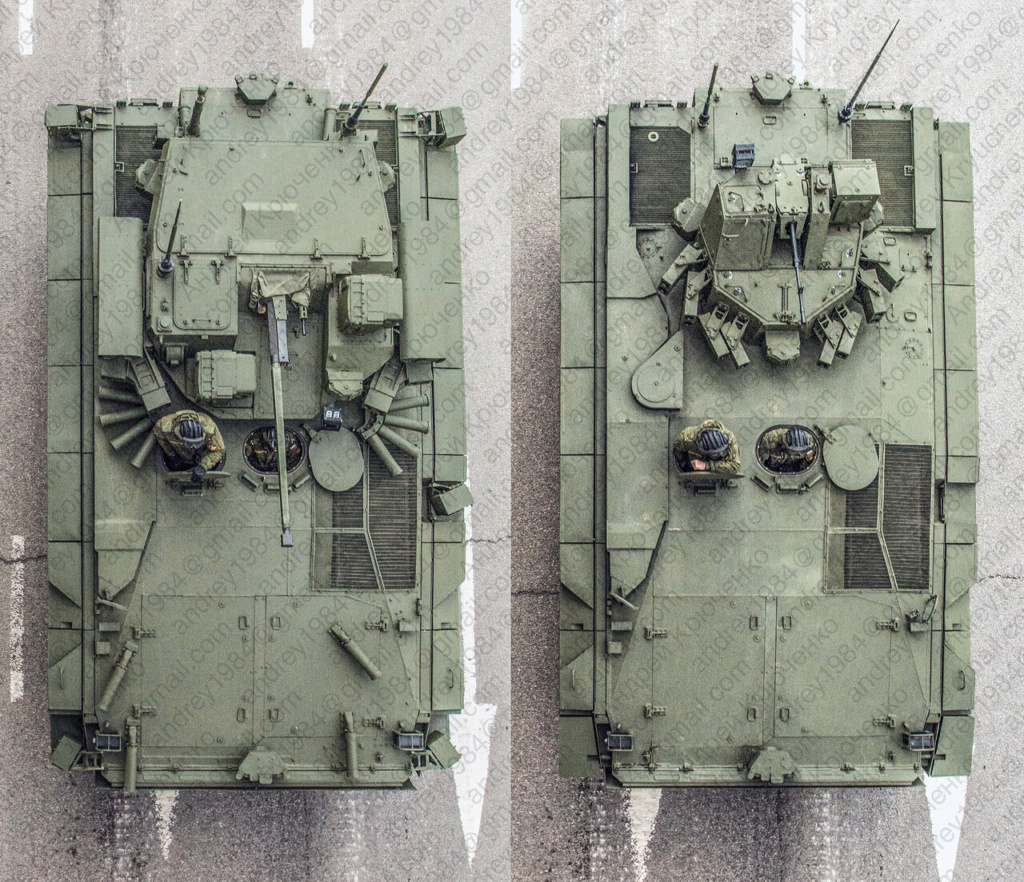 While this is the Kinzhal or Dagger turret which I believe is the 57mm high velocity Au-220 cannon plus two ATAKAs: 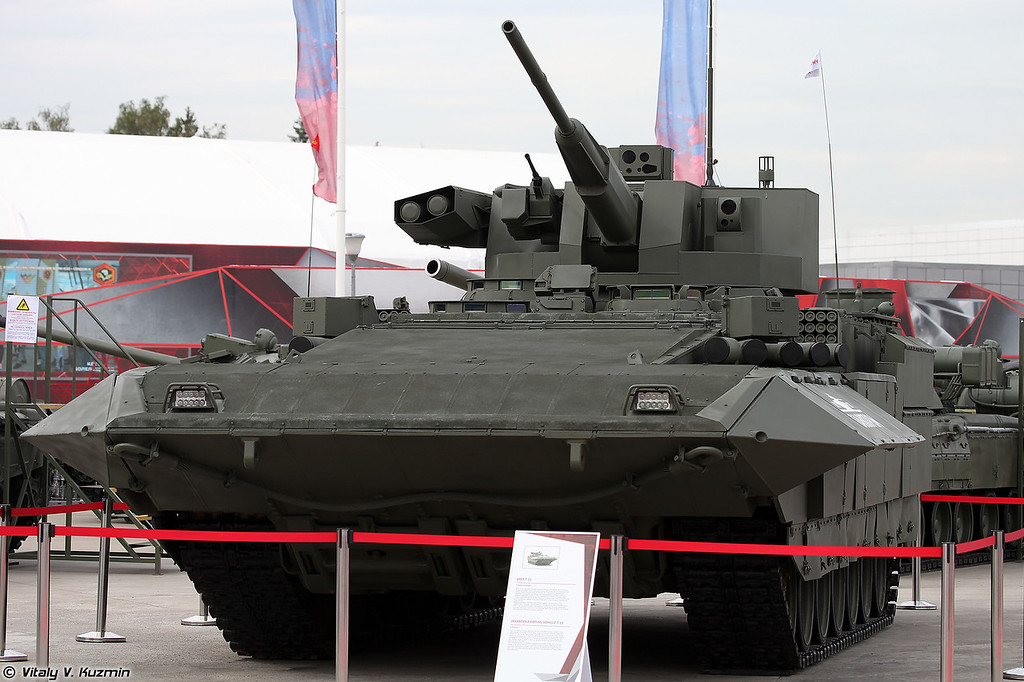 And the Berezhok turret is just an upgraded BMP-2 turret with four ready to fire ATGMs with two on each side and a rear turret mounted grenade launcher and a 30mm cannon main gun: 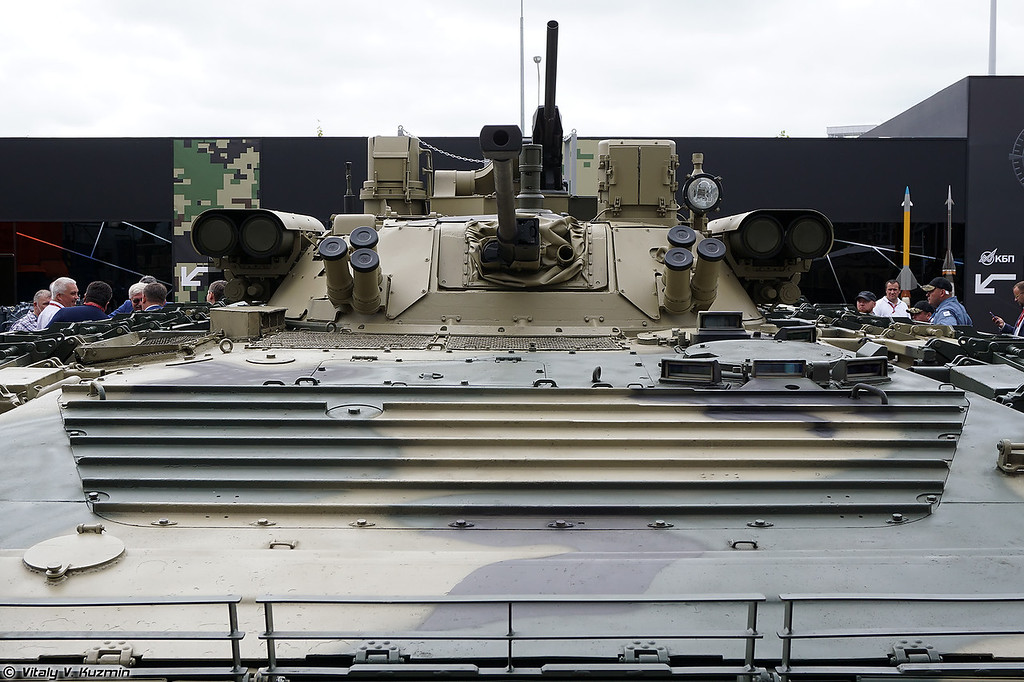 A little interesting they didn't include the naval 57mm gun mount Au-220M... or the turret for the 2S38: 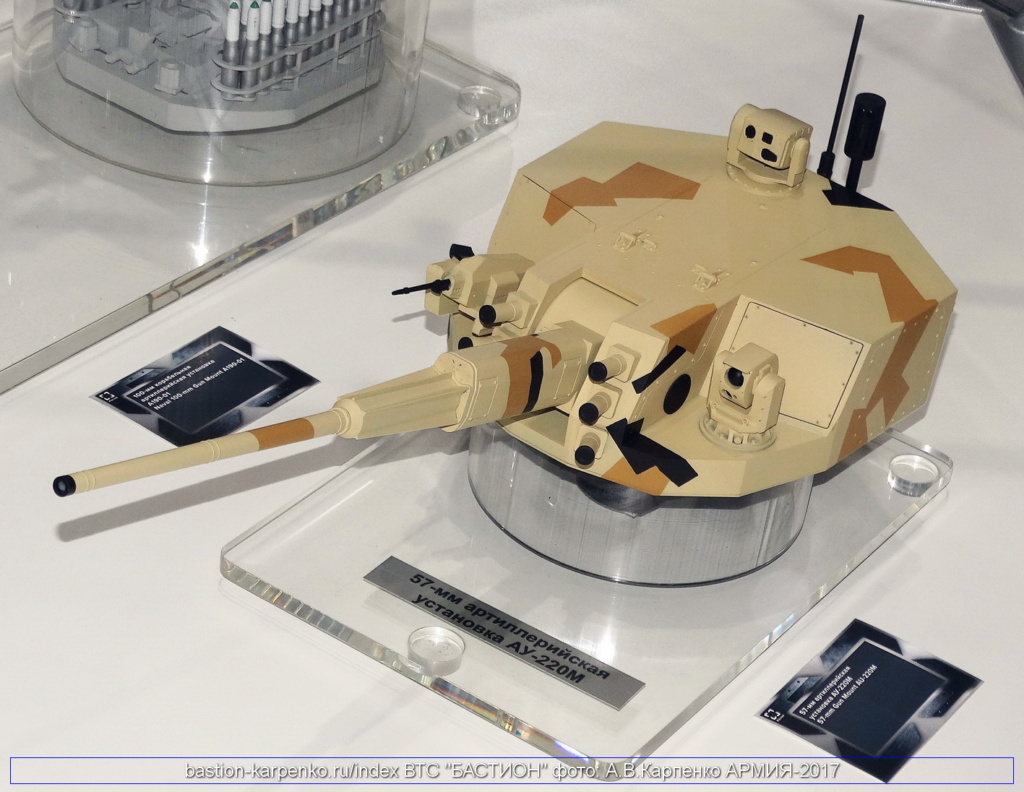 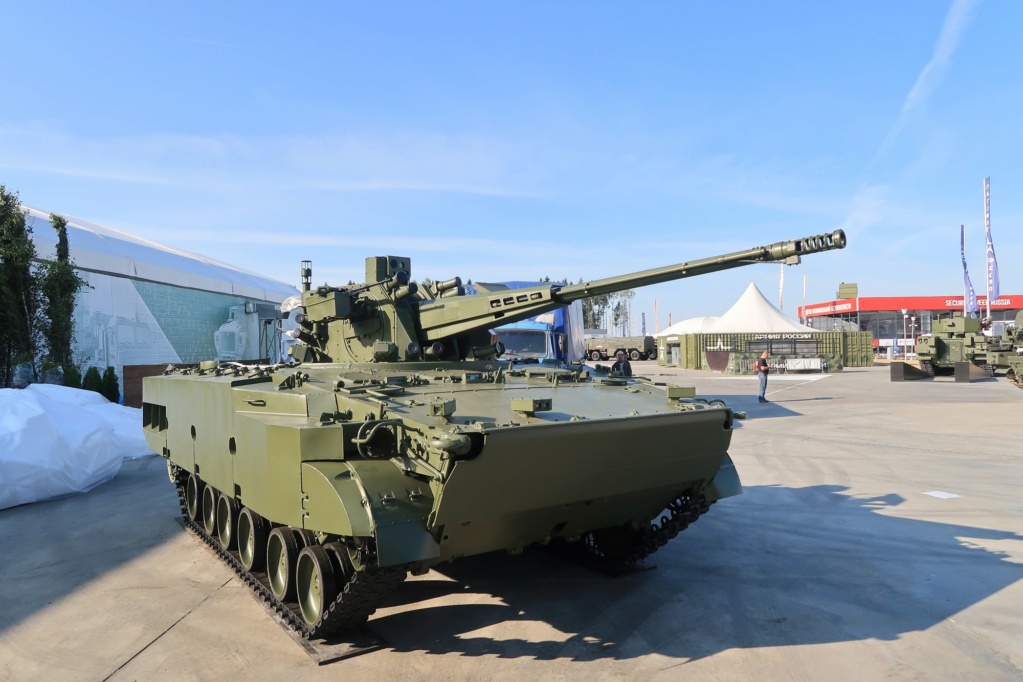 The up-gunned Epoch turret retains the zero hull penetration of its 30 mm variant:

Which means replacing older turrets with these new turrets would increase their troop capacity while at the same time bringing them up to state of the art in terms of optics and weapons...
Russian_Patriot_ 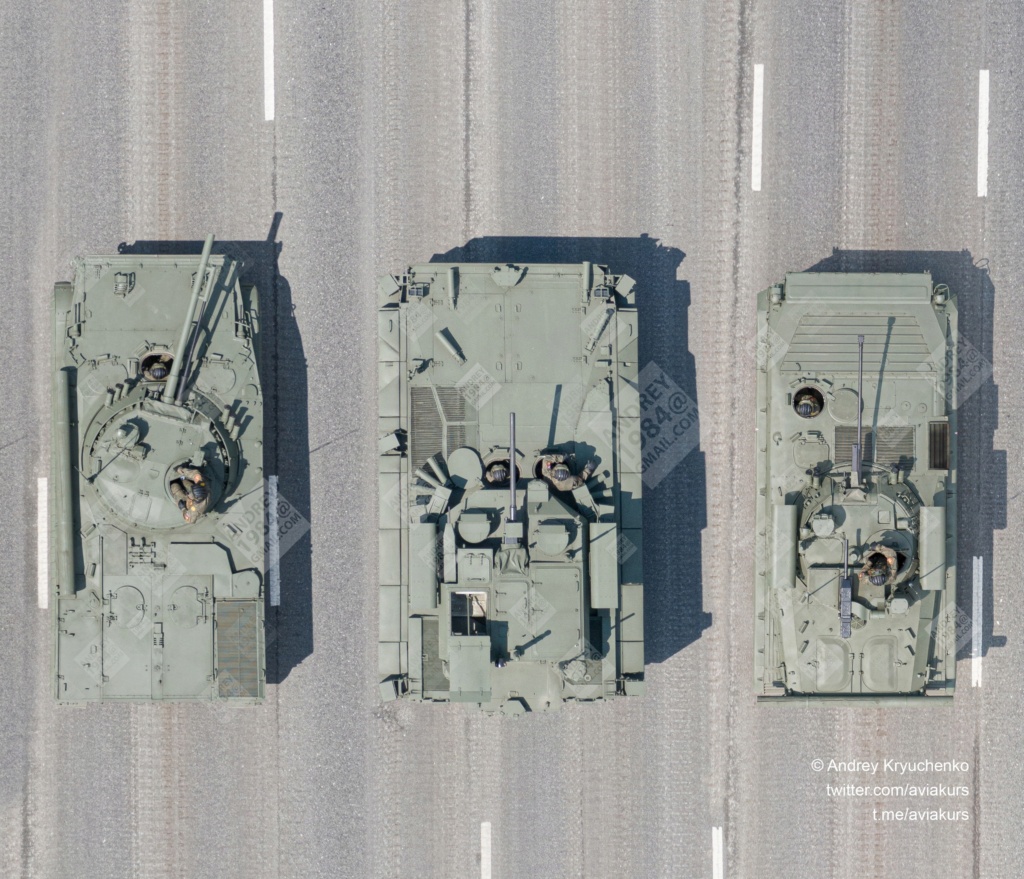