Where likely will Russia be dragged into next???

Where likely will Russia be dragged into next

They more or less failed in Syria which was farther from Russia ,than Afghanistan...
So in Afghanistan they will have no chance that Russia is closer ,and can't be blocked
as was the case of Syria  (with help of Turkey and Israel intervension)/

So afghanistan is a diversion in my opinion.. a training center of terrorism..

So my bet will be Ukraine will be used to instigate Russia into a war..
For example Moldova. which is next to Ukraine.. Russia have a thousands
of soldiers with UN support in the eastern most part ,so a war there will be a big
problem ,because Russia will be locked and forced to fly over Ukraine airspace
with US/NATO aiding Ukraine to shotdown Russian planes. Another one is Serbia.
a new conflict there will be very bad for Russia.. because could be too far ,from Russia
for a proper support. Check also Norway.. and findland.. border with Russia.. Extremist
cells of terrorist being formed there by Russia enemies. So called no go zones of muslim
in EUrope are the main centers/school of future NATO "freedom fighters" that will be repeating
Syria conflict in another place... So Russia will need to use very effective diplomacy to counter
US destructive anti Russian policies in eastern Europe. Because with military alone ,you can't win wars.. you need effective diplomacy ,that allows Russia to move forward as it was the case
of Syria.. they for example managed to freeze the conflict (even at the loss of territory for Syria) but still Russia managed to Save it from being totally over run by Israel/US/Saudi sponsored ISIS fighters ,which was the original plan.  So all this crazy policies of the west
of pressuring NATO partners to welcome extremist muslim and incite extremism they can control and manipulate ,was nothing more NATO secret armies to fight by Proxy Russia.
So watch Serbia/Montenegro... and Moldova..and maybe they could try something new in Ukraine... any dangerous conflict.. for Russia . is one where they don't have easy movement to that place or the place totally landlocked for Russia to help..as moldova (tranistria) is.. So im more worried about a conflict in Moldova ,were Russian soldiers are attacked or in Serbia.. victoria nuland tried to incite a conflict there.. Turkey could also be offered a deal $$$ to betray Russia and restart the destabilization of Syria.  To try a vietnam for Russia In Lybia will not be a good move ,since Russia have no important issues there to interfere as was CRimea or Syria.  A coup in kazakistan by extremist will be most dangerous security threat for Russia.. so they need to make sure an Euromaidan never happens there..  Afghanistan i don't see it as a major
issue as long Russia can keep them at distance from its allied former soviet states in the north.

So in summary Russia can't solve its future national security threats just using its military with modern weapons... because US enormous influence in the world  can keep the games of destabilizations of nations to force Russia interfere going endlessly . It means Putin ,that will likely will win next elections.. he needs to change the image of Russia in the world and focus in developing a modern economy strongly based on intellectual property ,things that shapes the way the future will be ,very popular in the world that everyones like..  Russia needs to look at Japan ,South Korea ,Taiwan , those nations in combination with US ,they produce most of the cutting edge technology ,and Russia needs an industrial revolution in the business civilian side.
Develop an alternative internet with China for example and compete with US top technology business ,instead of relying so much in sports and agriculture or Tourism around Russia golden past.. Is the future that Russia needs to focus ,how to lead and not its past. If Russia was like Japan in Industrial technology power , long time ago NATO will have been disbanded and US hegemony in the world ended ,since Europe will have seen they don't need to continue following US highly destructive policies in the world ,if Russia can replace their business. Euromaidans also will be impossible to do ,to separate from Russia ,since Russia image will be
very different among young generations which are the ones that usually hired for any revolution. The wars Russia face today is consequence of its failure to influence Europe away
from US..  Nukes and sports medals and to sell more potatoes than anyone will not convince Europe to abandon US policies ,since they need them, but if Russia had already strong alternative to US major innovative business ,then people will not think twice to abandon the
american leadership and follow Russia. This hidden power that your industries (and infraestructure) can achieve was better understood by Soviets.. they at least were very
ambitions on its space program.. but Putin simply don't see how his own outdated vision of
Russia development is causing the wars they need to face everyday.. If american saw they
could benefit from an alliance with Russia (because it was more developed and advanced its business) then they will not be every year planning how to break Russia again.. instead will
be seeking to be the closest allied of them. Putin is completely clueless about how he fails
in influencing the west. Is not with nukes ,tanks or stealth jets that Russia can defeat American hegemony.. but with modern innovative economy instead ,that leads the world into the future and helps Russia to influence the west. Landing First in mars with humans or developing
photonic computers for people use are a free new world wide internet that is free of US control are a few examples of things Russia can do ,that can indirectly helps Russia defeat Americans
hostile polices and dissuade them to stop its confrontation with Russia and accept Russia as an ally instead.

See by yourselves.. Putin said he wants Russia to be world biggest exporter of wheat , bananas ,any business that is easy and doesn't require any brains , but proffessor Dr. Michio Kaku explained how outdated is economies purely based on mining or agriculture and this is were
Putin wants to take Russia.

So Russia will continue facing wars until Putin manage to understand that is Russia
poor leadership in the world ,poor influence with Europe /NATO with its nation business
development what allows Americans to continue leading the world and influencing so
easily revolutions around the world.
d_taddei2

I don't see Afghanistan as a complete country will be a problem it's more of a launch pad into central Asia that is the concern as you will have seen from the various links posted earlier it's starting to cause concern for Russia and quite rightly so. These countries are in its back yard and a lot of fighter's in Syria come from the region so it's easy to recruit more Muslim extremists in the area and geographical area is a nightmare to fight and defend. I have first hand experience of the region especially pamir/gornobadhkshan area. Such a weak border people were just walking back and forth over the border for entire borderline
Unchallenged. As for transnistra I've been there too the situation is rather at a childish tit for tat name calling and transnistrain people are fiercely proud and will defend their country and their is still a fairly large pro Russian support in the rest of Moldova and then you have Gagauzia area a semi autonomous area also pro Russian. And everyone knows that the several villages that had their residents relocated so that all the buildings are now packed to the roof with weapons and ammo as is some apartment blocks in tiraspol. I think unless a highly planned and highly successful maidan scenario I don't think it will happen just not enough will and support in the region for it. I do think eastern Ukraine will erupt again but I think Usa know that Russia and kick ass on its doorstep and ukrainian armed forces are mostly in dire shape, central Asia will be a tough nut to cracking but with it also near China and effect the one road one belt initiative China will likely add support as will Iran so what will Usa do? Simple a war on two fronts maybe even 3 or 4. A conflict in central Asia and eastern Ukraine at same time will be a nightmare and if you add the 3rd and 4th front Chechnya and terrorist attacks in major Russian cities suddenly that nightmare gets worse and people in Russia want change and blame Putin and government then there's riots on the streets.
George1


An American view of the causes of Russian intervention in Syria

The authors of the study came to the following main conclusions: 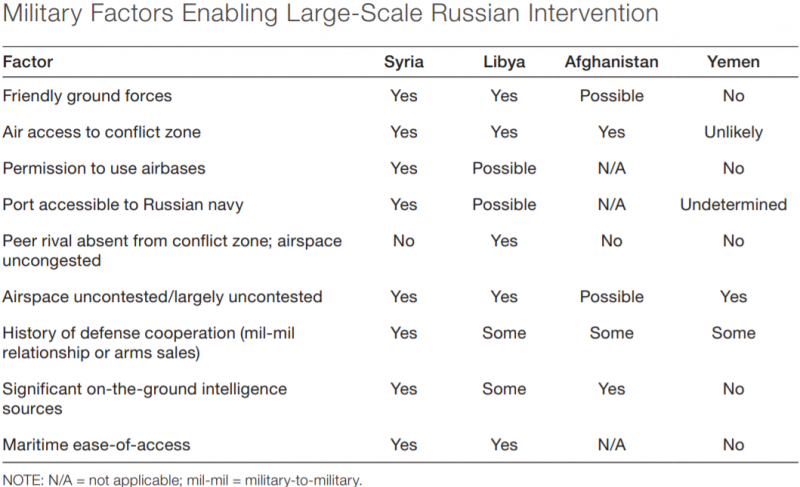