South Korea's Defense Acquisition Program Administration (DAPA) on April 18, 2017, for the first time released official information on the establishment of a high-precision ground-based missile in South Korea, called Tactical Surface Launch Missile (TSLM), and representing, as can be judged, the option of the South Korean National anti-ship missile Haeseong (SSM-700K). In a number of South Korean media, the TSLM missile is designated as Haeseong II. 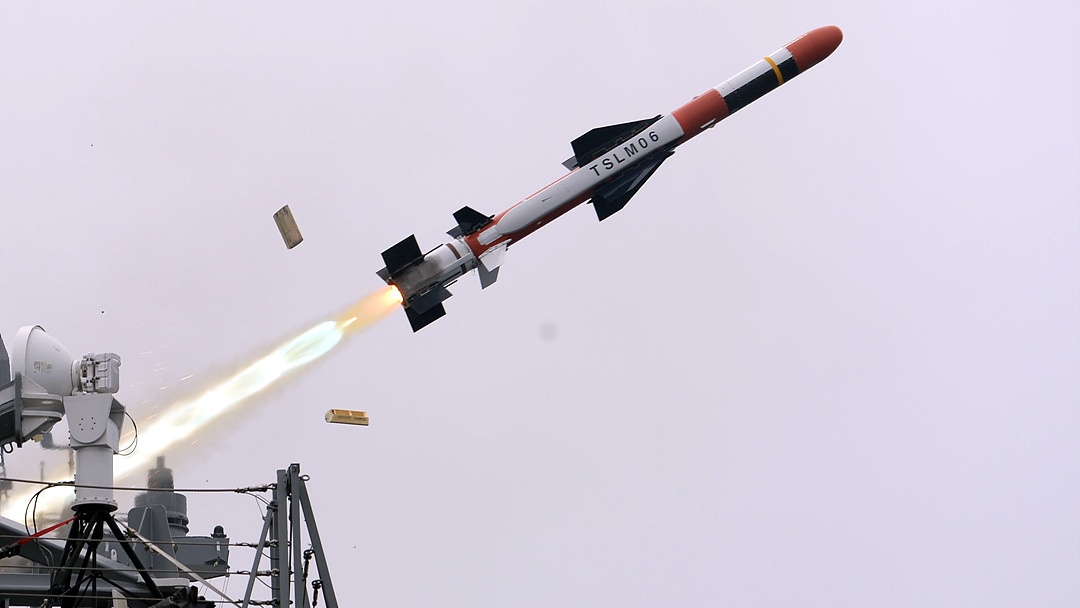 According to DAPA, the TSLM missile was developed in 2011, and from 2016 it is already being deployed on the ships of the Korean Navy (the new frigates of the FFX-I project) in a variant with an inclined start from the "canister" transport and launch canisters with accommodation on standard launch vehicles Haeseong, and now completed the development of the TSLM version for launching from the universal vertical launchers of new South Korean warships. Serial production of this version of the missile will be launched in 2018 with the beginning of receipt for ships in 2019.

Details on the design and characteristics of the TSLM missile are not reported, but it can be understood that it was made on the basis of the Haeseong design, designed and manufactured by the South Korean company LIG Nex1 (part of the LG group), and apparently retained the hull, turbojet engine and range (Up to 200 km) of the base rocket. The guidance system TSLM, apparently, is made by an inertial satellite using GPS correction. According to the release of DAPA, the TSLM missile is equipped with a cassette warhead with cumulative fragmentation elements "striking the area of ​​two fields for American football." From this it can be concluded that the main purpose of the TSLM missile is to defeat the positions of North Korean artillery and missile systems.

The variant of the TSLM missile for launch from the VPU differs from the "canister" missile by the presence of a more powerful launch accelerator equipped with a variable thrust vector.

According to the Defense Acquisition Program Administration (DAPA), on June 1, 2017, the "qualification" tests of the first anti-tank guided missile system of the South Korean development of Hyeongung (현궁, also called the Raybolt name) were successfully completed, which allows to start serial production System and the beginning of its supply to the troops. The first production batch of Hyeongung complexes should be manufactured and delivered this year 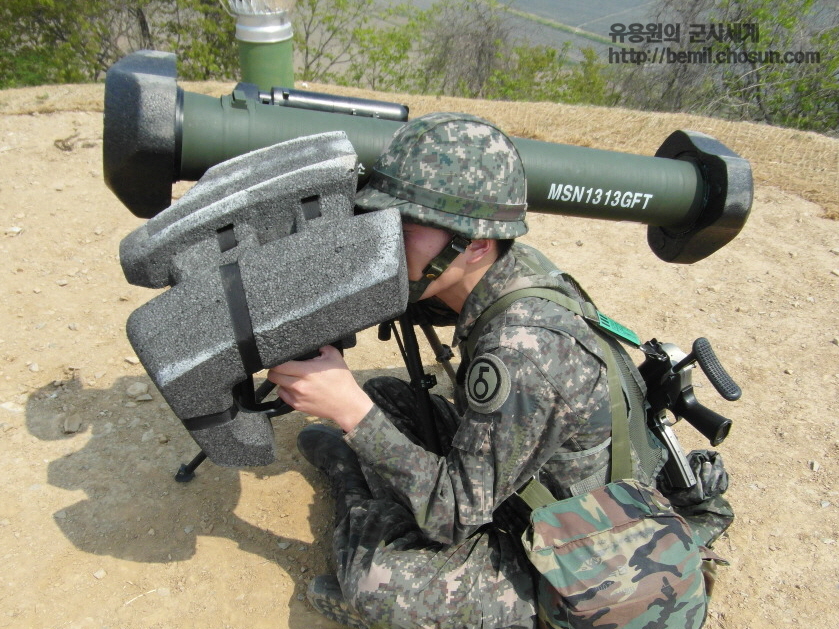 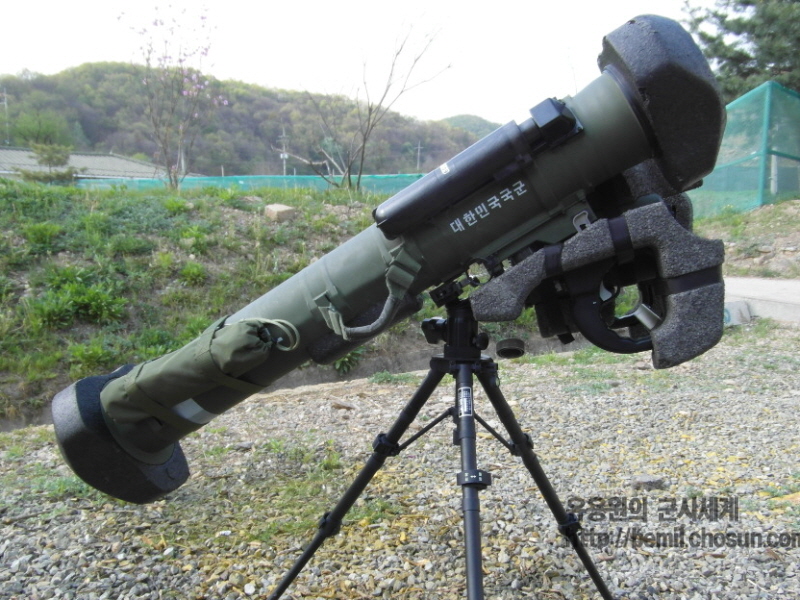 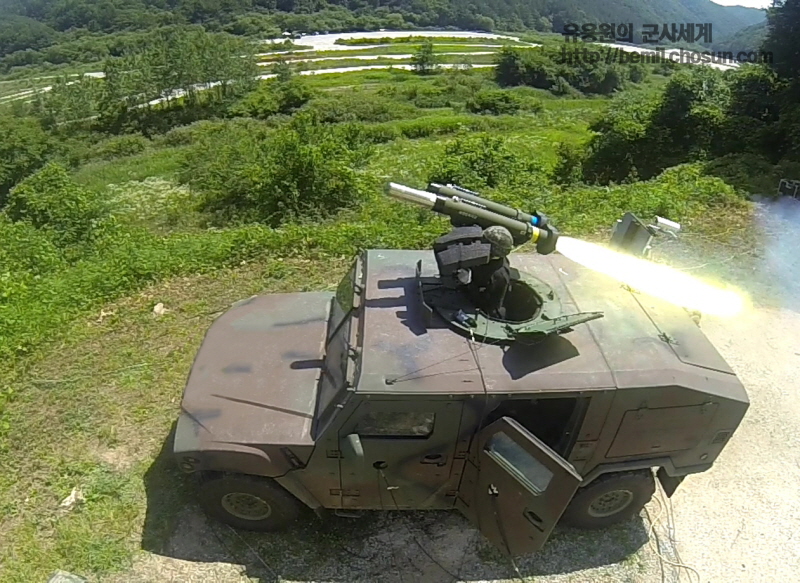 According to the South Korean newspaper The Korea Times, on July 13, 2017, Hanwha Systems (part of the Hanwha corporation) in its Yongin factory in Gyeonggi-do province, for the first time publicly demonstrated the first prototype of an on-board radar station with an active phased array antenna ) For the fighter KF-X, being created in South Korea. 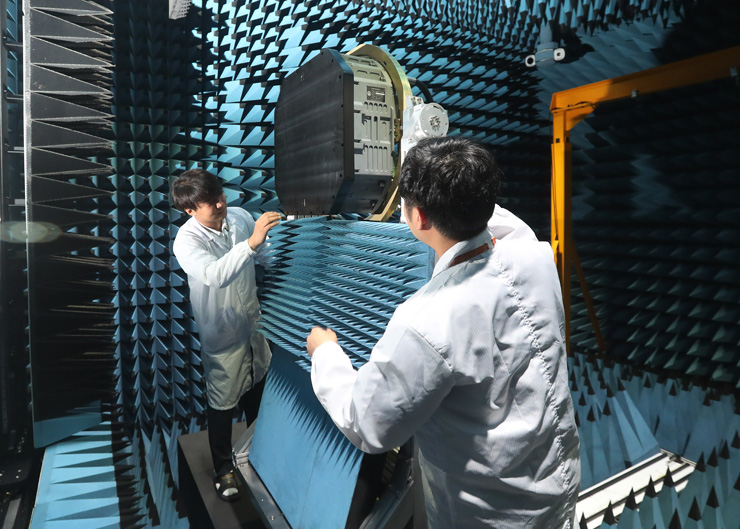 they are now were Russia was in 2007. Lets see how far they get. 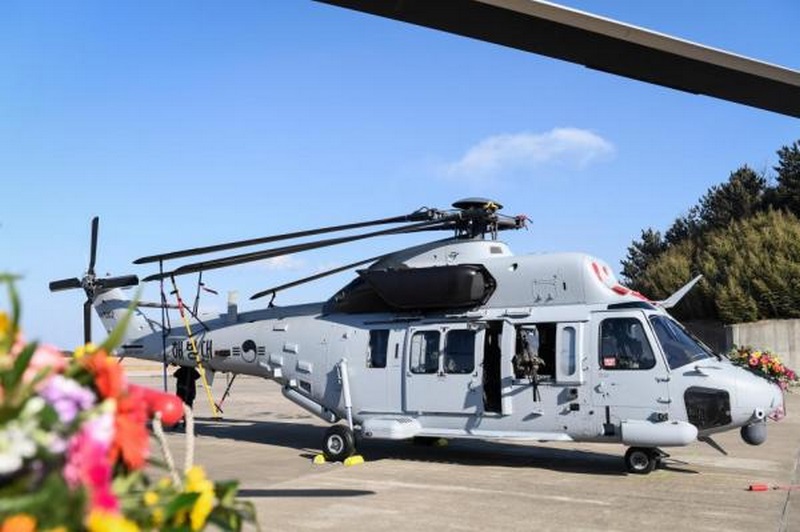 On February 1, 2018, the South Korean defense procurement agency, the Defense Acquisition Program Administration (DAPA), announced the transfer to South Korea of a new frigate FFG 818 Daegu, a second-generation FFX (Batch II), built by the shipbuilding association Daewoo Shipbuilding & Marine Engineering Co. (DSME ) at the shipyard in Okpoh. Earlier, the South Korean fleet from 2013 to 2016 received six frigates of the FFX type of the first series (Batch I), designated as Incheon. 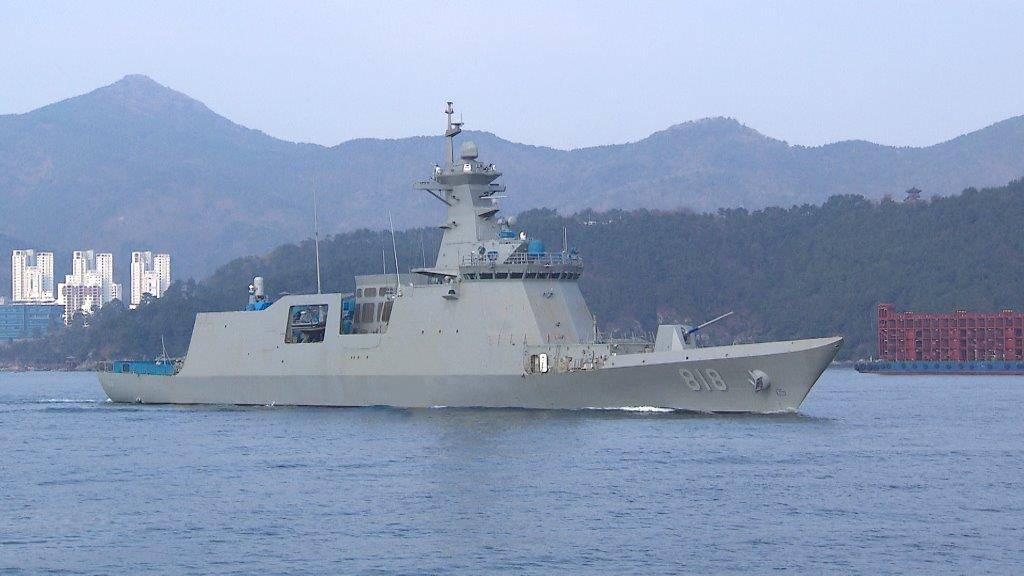 The South Korean spotter, under the name Fangnook, distributed the photographs of the first prototype of the South Korean reconnaissance-strike unmanned aerial vehicle of the long range, known under the designation KUS-FS (Korean Unmanned System), which he had made on March 16, 2018. These are the first known images of the flying prototype of this UAV in open sources. 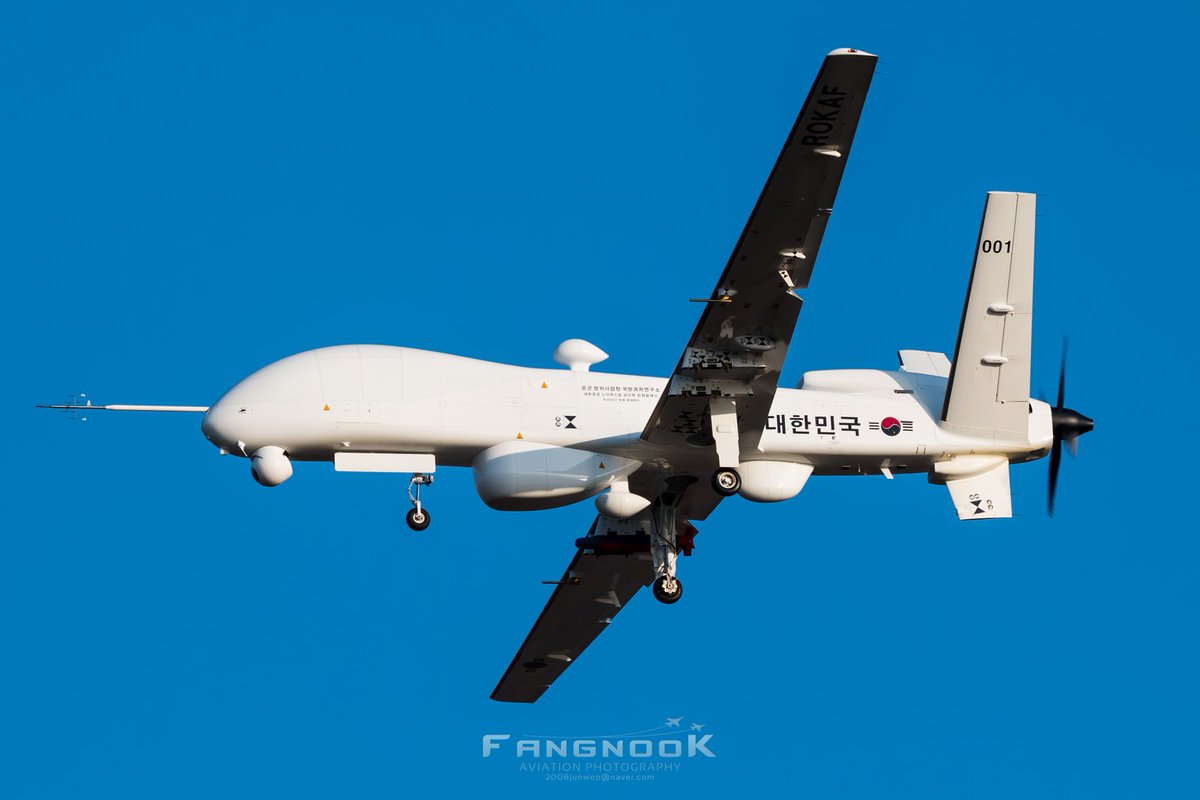 The Republoc of Korea Air Force in 2018, by airbases and squadrons! 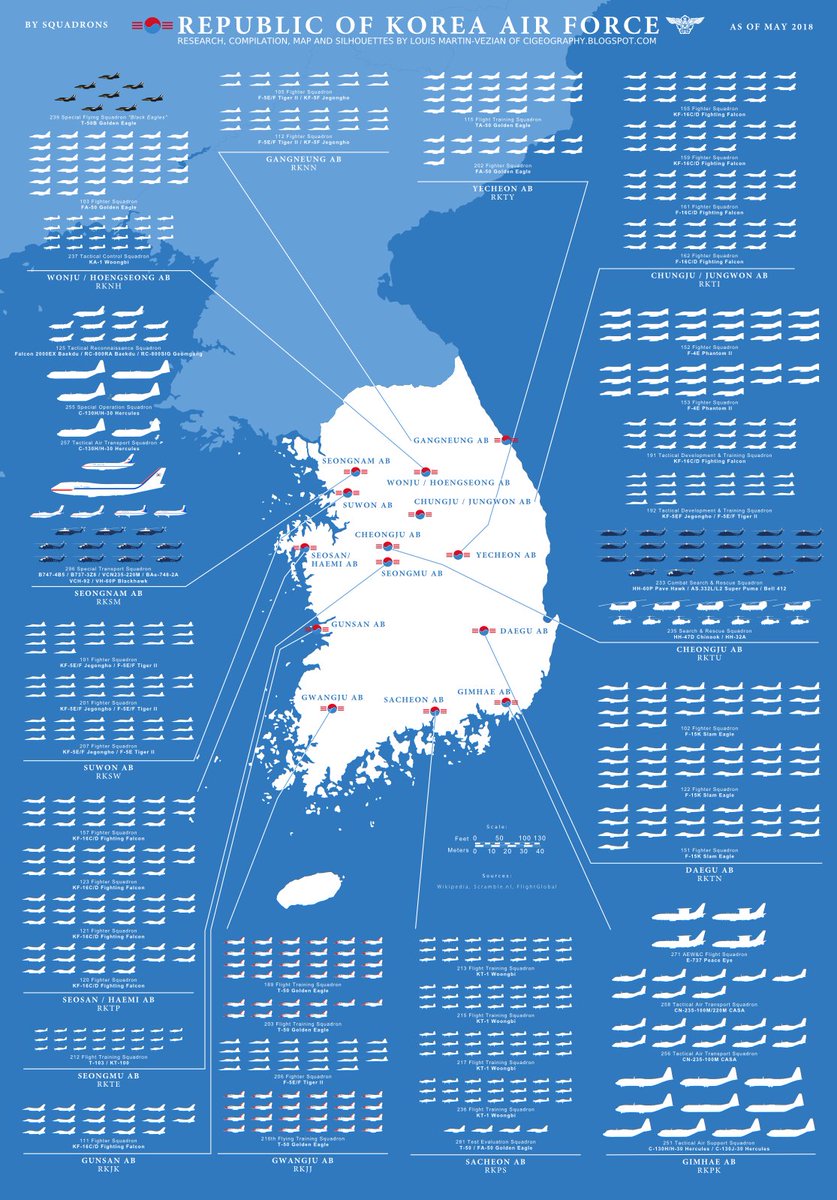 They don't want to call it a carrier & anger Japan. Bad news for JMSDF!

South Korea officialy launched its first domisticaly made AIP submarine named Dosan Ahn Chang-ho. It is equiped with the K-VLS (korean vertical launch system) equiped with 10 Hyunmoo-3 missiles. It carries torpedos and Hongsangeo anti ship mossile that can be launched through torpedo tubes.

So the german ToT proved to be very good for korea and very bad for germany as they just lost a client which will probably sell its own sub to potential customers.
George1 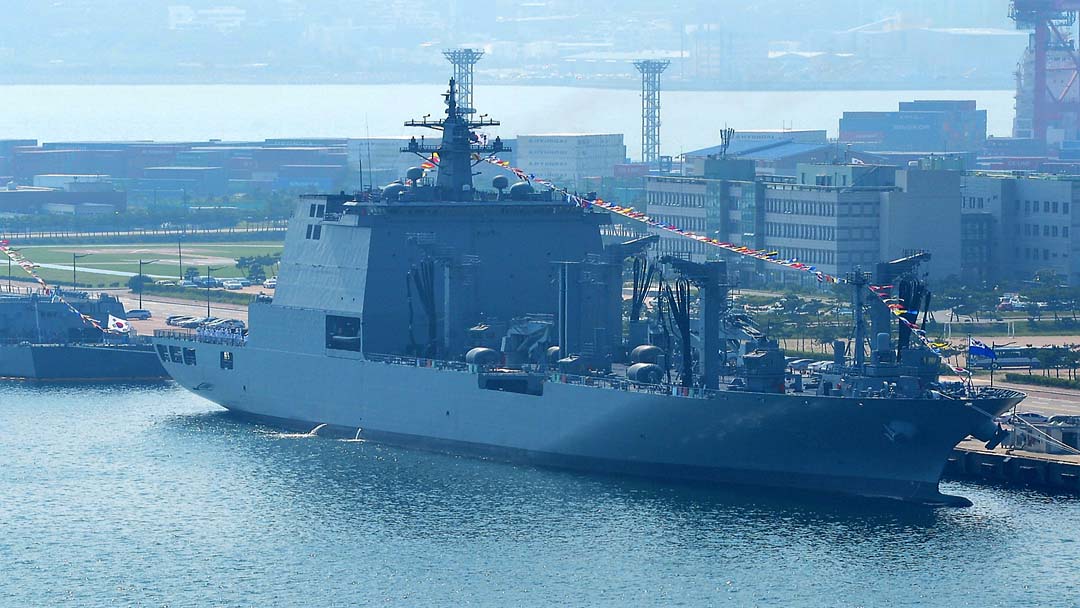 Center for combat training of the South Korean army KSTS

An interesting video (in Korean) of two-way combat training at the Korea Combat Training Center (KCTC) South Korean Army Training Center located in Inje, Gangwon-do Province. The KSTS center was established in 2002 and since 2005 has been providing combat training using laser shooting simulators and displaying the position of each soldier at the terminals of intermediaries. As the enemy's designation forces, a special part of the “Reds” is used, equipped with T-80U and BMP-3 tanks received from Russia (previously it was a battalion of the so-called “11th Rifle Division”, deployed in 2015 to the OPFOR combat group).

North-South military deal has alarm bells ringing
It's about time they take matters into their own hands!

Hahahhahahahaha... Pompeo panics that South Korea might make peace with North Korea and realise they don't actually need the US at all... but then they never did of course... the US isn't there because of North Korea... they are there because of China...

But obviously they want to keep selling military equipment to SK too...
George1

On December 18, 2018, a roll-out and official presentation of the first LAH (Light Armed Helicopter) promising South Korean military helicopter was launched at the enterprise of the South Korean Aircraft Building Corporation Korea Aerospace Industries (KAI) in Sachhon. The start of ground tests of the first prototype is scheduled for January 2019, and the first flight - at the beginning of May 2019. 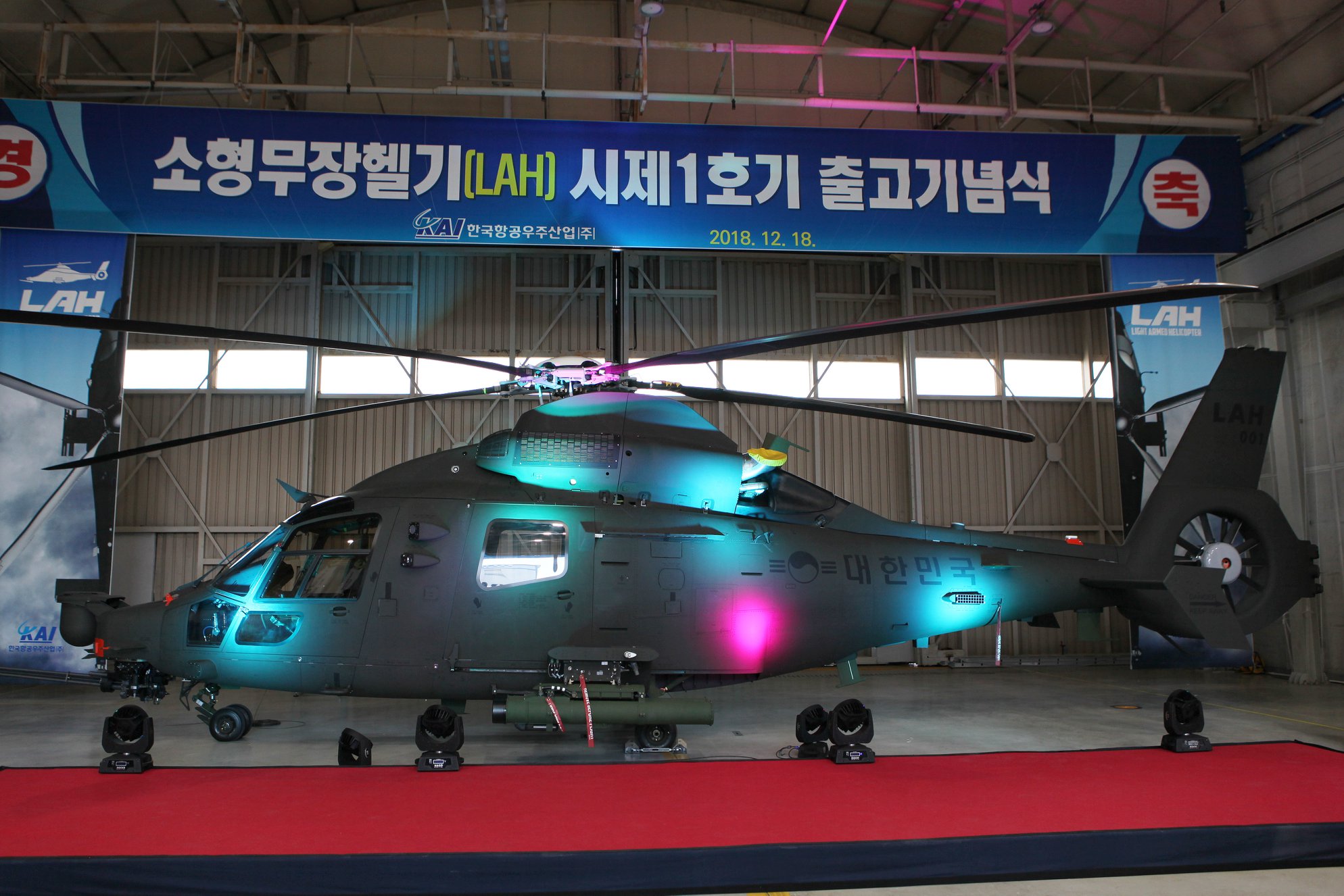 
Recall that on June 25, 2015, KAI Corporation received contracts from the South Korean Government Defense Procurement Programs (Defense Acquisition Program Administration - DAPA) and the Korea Industrial Technology Development Institute (KEIT) to create a medium (“light”) helicopter 5 ton weight class in two versions - respectively, the military Light Armed Helicopter (LAH) and the commercial Light Civil Helicopter (LCH). The contract with DAPA provided for the financing from her side of the development of the LAH helicopter in the amount of 650 billion South Korean won (about $ 587 million), and the contract with KEIT - financing the development of LCH in the amount of 350 billion won (about $ 316 million).

According to current plans, the civilian LCH helicopter should be certified and launched in 2021, and the military LAH in 2023, although it is unclear whether these deadlines will be met.

The LAH helicopter is being created in accordance with the requirements of the South Korean Army Aviation, formulated back in 2010, involving the purchase of 200 medium-sized helicopters armed with an ATGM to replace the existing Hughes MD 500MD Defender and Bell AH-1S Cobra helicopter fleet. On the whole, KAI is very optimistic about the prospect of selling up to 600 LCH helicopters and up to 400 LAH helicopters on the Korean and global markets, especially since Airbus Helicopters intends to stop producing the original H155 after 2020.

The LCH helicopter must be equipped with two Safran (Turbomeca) Ariel 2C2 turboshaft engines, and a military LAH with Ariel 2L2 engines. The development of these engine modifications is carried out with the participation of the South Korean group Hanwha, which should localize their production.

The first prototype of a commercial LCH helicopter was built entirely at the Airbus Helicopters facility in Marignane (France), apparently representing an H155 modification, and began flight tests there on July 24, 2018 (has French F-WWOH registration).

KAI has already had successful experience of cooperation with Airbus Helicopters (formerly Eurocopter) since 2005 in the creation of the South Korean multi-purpose helicopter KUH-1 Surion of 8-ton class, which has been in mass production since 2013. 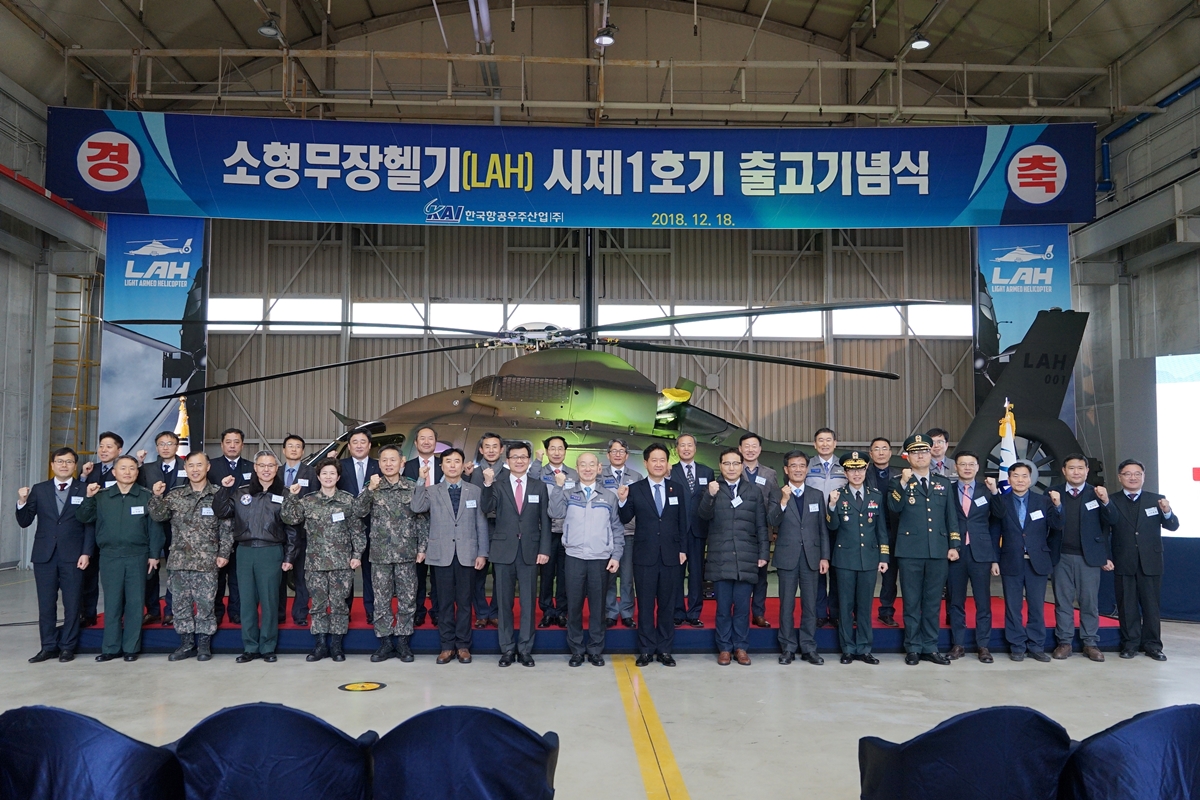 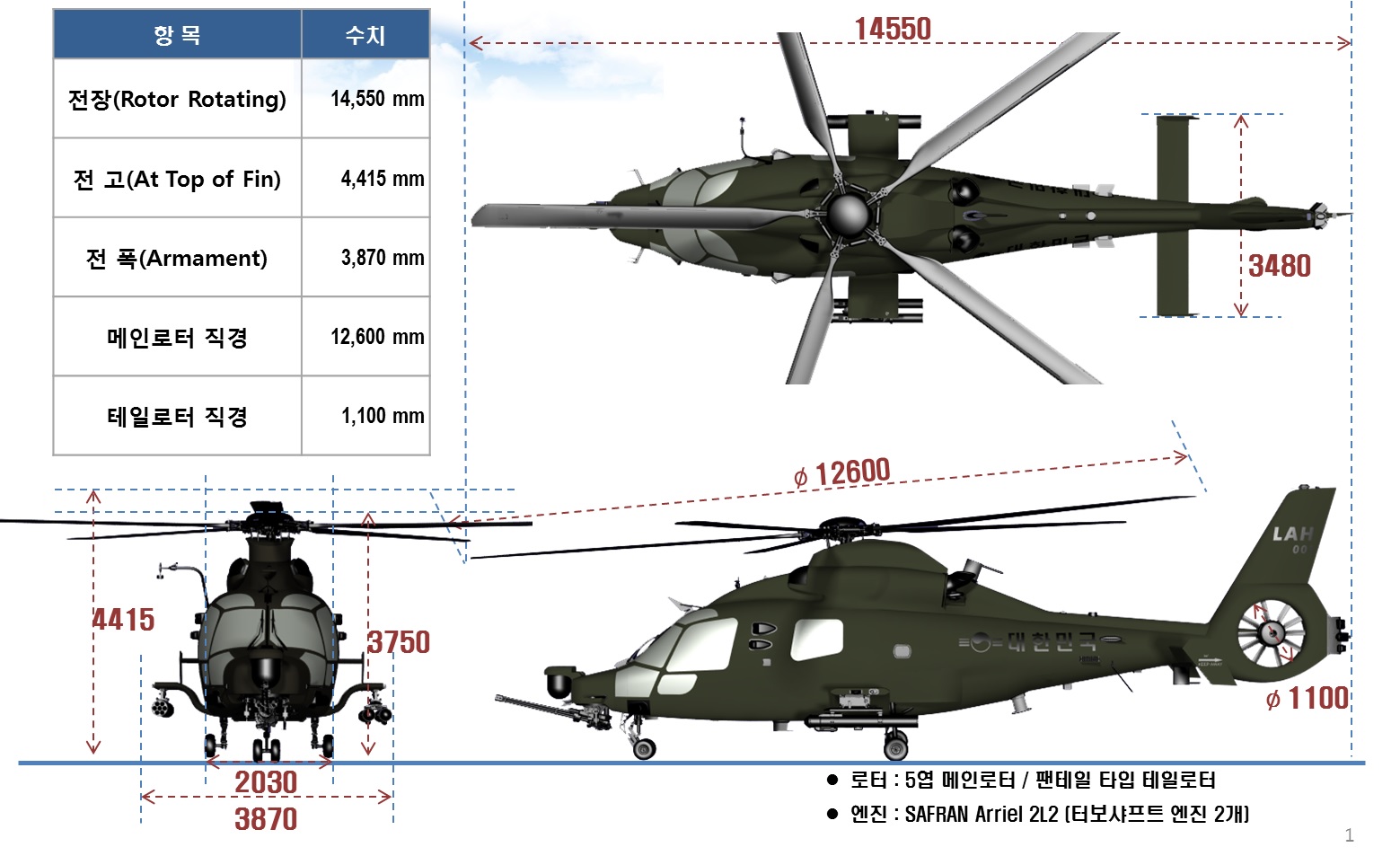 South Korean submarine of the national project KSS-III at sea

Reportedly, on June 10, 2019, factory running tests of the head of a large non-nuclear SS 083 Dosan An Chang-Ho submarine of the KSS national project (Jangbogo III) built for the South Korean naval group were launched without special publicity in South Korea. Daewoo Shipbuilding and Marine Engineering (DSME) in Okpo near Busan. It is assumed that the boat should be transferred to the South Korean fleet by the end of 2020 with water in service of the Navy in January 2022. 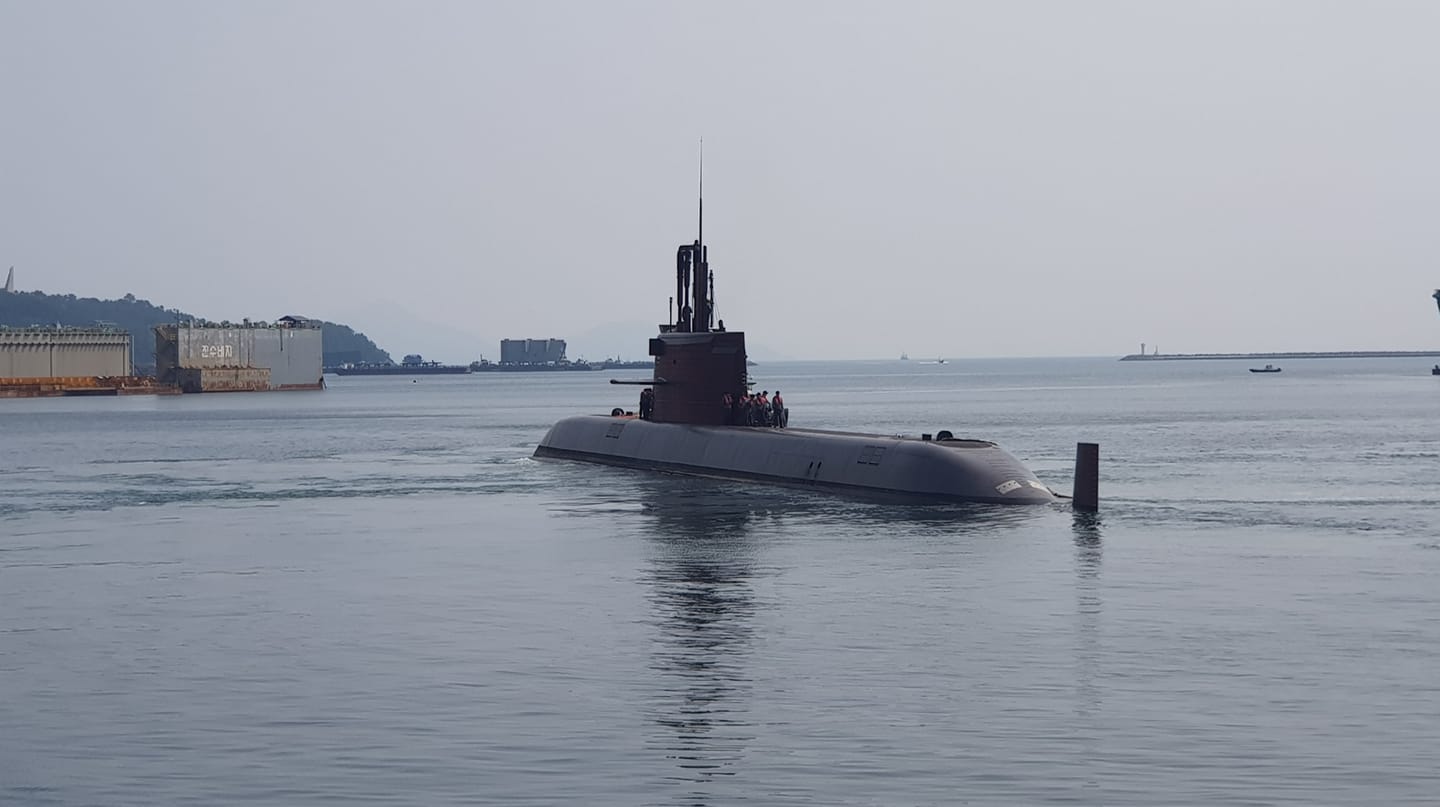 In South Korea, approved the construction of a large universal landing ship

As South Korean media reported, at a meeting of the country's top military leadership, held on July 12, 2019, chaired by General Pak Han-ki, Chairman of the Joint Chiefs of Staff of the South Korean Armed Forces, construction was approved for the South Korean fleet of a large aircraft carrier of an amphibious assault ship. New project LPH-II. The decision is motivated by the build-up of the Navy of China and Japan. 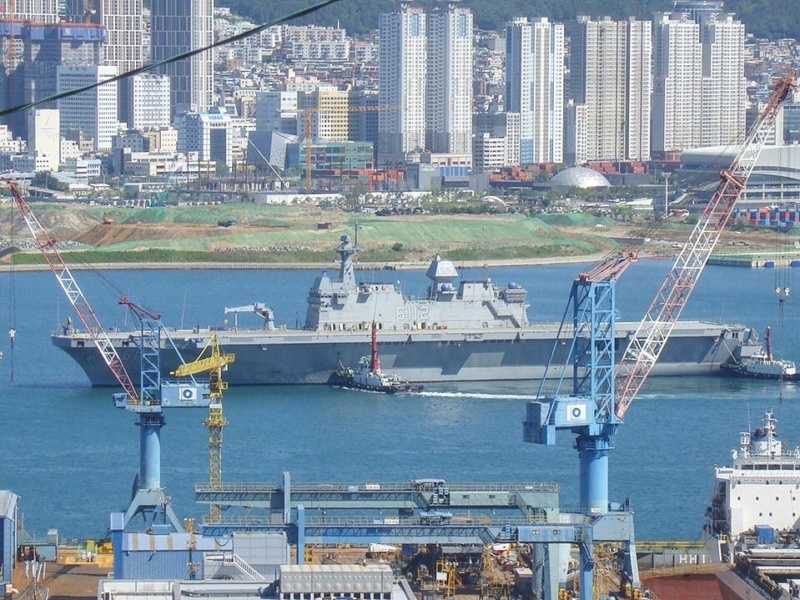 Currently, two universal amphibious assault ships (UDC) have been built in South Korea, formally related to the LPH-I - LPH 6111 Dokdo project (the South Korean Navy was commissioned in 2007) and the LPH 6112 Marado (since May 2019) tests, to be put into operation in 2020). It is reported that the planned for construction of the third UDC of the LPH-II project will have a standard displacement of about 30 thousand tons - twice as much as the Dokdo type ships (14.5 thousand tons). The new UDC of the LPH-II project will be able to hold up to 3,000 marines, up to 20 main tanks or amphibious armored personnel carriers, and will be a full-fledged aircraft carrier with an aircraft group of 16 Lockheed Martin F-35B Lightning II fighters. For their takeoff, the ship will be equipped with a springboard.

With a standard displacement of 30 thousand tons, the South Korean UDC of the LPH-II project will be inferior only to the American UDC (Tarawa, Wasp and America types) and exceed the Spanish, Australian and Turkish UDC type Trieste, as well as the Japanese helicopter carriers of the type Izumo.

As if they don't have other things to spend $ on!
Sponsored content