“State trials of the helicopter will start after that,” he said.
Only experimental models of the regular Ka-60 and Ka-60U combat trainer have already been made, he said.
The helicopters will have both a military and civilian use, Chernyshev said.
Preliminary tests are in progress. They will be over by end of this year,” he said.

The helicopter will carry lightly armed paratroopers. It has a single rotor in contrast to other Kamov models.
The Defense Ministry needs up to 400 Ka-60. The manufacturer, Kamov, is a component of the Russian Helicopters Holding.

They will likely replace the Mi-2 in the light scout and recon role.
Admin

The first delivery of 40 engines for Russian Helicopters will be implemented over two years, the press service of the company.

This contract was the first firm orders in the implementation of the framework agreement on the development and delivery, at least, 308 engines of this type to be installed on the modernized helicopter Ka-62, signed "Helicopters of Russia" and the French company Turbomeca in April 2011.

As the general director of holding "Helicopters of Russia, Dmitry Petrov," we managed to conclude a contract to supply the first batch of engines almost immediately after the signing of framework agreements. I am confident that our partnership will be fruitful. "

Bit of a mixed bag really regarding my feelings towards this news.

It is good that it means that in the next two years they will be making 20 Ka-62 Helos, for which the 40 engines will be needed... but for such a large order perhaps they could have paid for licence production in Russia of the engine?

I guess with a total order of 308 engines this means at least 150 Ka-62s will be built... but are there military orders?
Austin

Russian Helicopters, the holding company for the country’s rotorcraft industry and Kamov’s parent company, is simultaneously preparing both the Ka-60 military transport and the Ka-62 civil version. The latter has a maximum takeoff weight of 6,500 kg (14,300 lb.) and can carry 12-15 passengers at 290 kph (180 mph) speed over a range of 750 km (460 mi.).

The development of this type started in the late 1980s, and the initial prototype made its first flight in 1998. Capable of carrying up to a 2,500-kg payload, the Ka-60/62 was designed to fill a niche between the Ka-226 light twin and medium-class Ka-32 and Mil Mi-8/17 helicopters.

Unlike all other Kamov models that feature distinctive co-axial rotors, Ka-60 has a classic helicopter design with a five-bladed main rotor and shrouded tail rotor. According to the designers, its rotor blades and more than half of the fuselage are made from composites. Kamov currently has only one prototype in flight, powered by 1,300-hp NPO Saturn RD-600V turboshafts. Another prototype was lost in a crash during a test flight near Moscow in June 2010.

According to Russian Helicopters CEO Dmitry Petrov, the development efforts are now focused on the Ka-60, with Russia’s military having ordered more than 100 such helicopters. He said that two new prototypes are currently being built to join flight trials this year. One more test helicopter will join the trials in 2012.

The new versions apparently will differ from the existing rotorcraft by featuring a more streamlined fuselage and improved tail controls.

The other difference will be the powerplants — the prototypes will start trials with RD-600s, but recently received more powerful 1,680-hp Turbomeca Ardiden 3G engines.

At HeliRussia 2011, the annual helicopter industry exhibition recently held in Moscow, Russian Helicopters announced an order for 40 Ardiden 3Gs, with deliveries to begin in 2014.

The order is the first part of a contract for 308 powerplants signed between the Russian manufacturer and Turbomeca in April. According to Petrov, the French engines will be installed on all serial production helicopters. During the internal tender, Ardiden 3G “won over Russian engines on all key parameters,” he says. Earlier, the designers planned to use them only on civil Ka-62s, while the military Ka-60 retained the Russian RD-600V. “Now the [Russian] military [has] become more open to foreign equipment,” Petrov says.

This configuration can operate using digital maps and terrain models, and supports all typical helicopter applications.

The same avionics package can be put on Kamov Ka-226T light helicopters, which have the same-sized instrument panel, Transas designers say. But for now, this type is running in the Indian army’s tender for 197 light helicopter with a different avionics kit.

The Ka-60 is expected to begin serial production at the Arseniev-based Progress facility, a subsidiary of Russian Helicopters, starting in 2015.

Besides military orders, this program is supported by government subsidies. As Denis Manturov, deputy minister of industry and trade, said recently, from 2011-2013 Russian Helicopters will receive a total of 12.2 billion rubles ($435 million) from the federal budget for development of the Ka-60/62 as well as the Mi-38 heavy twin that also is in the flight trials stage.

According to Petrov, the civil Ka-62 will be certified in 2015-2016 under both Russian AR MAK and European Aviation Safety Agency standards. The holding does not have orders for the civil version now, but hopes that the installation of the foreign engine with a well-run maintenance network will increase the helicopter’s attractiveness for commercial operators.

This is good news, having a few different sizes of helos makes the force more flexible.

Having to use Mi-8s for everything was a bit wasteful... a smaller helo could perform roles like delivering post to some isolated outposts cheaper.
TheArmenian

Ka-62 is actually a new development, Ka-60 has folded.
The Military will supposedly be looking at militarizing the Ka-62, so hold tight for new regarding that.
GarryB

Last I read they were ordering French engines so they could start getting them into service in 2013-2014 and that domestic production of engines was being arranged... along with Klimov produced new engines for the Attack Helos (ie Ka-52 and Mi-28N/M.
TR1

TR1 wrote:Ka-62 is actually a new development, Ka-60 has folded.
The Military will supposedly be looking at militarizing the Ka-62, so hold tight for new regarding that.

Original Ka-60 did not satisfy requirements for either mil or civies (not today in any case).
This is a modernized bird, which the military will in turn, bring up to "mil spec".
We should see the bird 1st Quarter 2013, so very soon.

OK cool tnx for the info.
I'm just glad to hear it's going ahead.

Ka-27 is actually a much heavier and powerful helo, so I am not sure Ka-62 will be appropriate replacement.
MOD is buying/modernizing Ka-27s and 29s for a number of purposes, but apparently they want a smaller helo for new ships like the 20380/5. Ka-62 could be perfect for this.
Cyberspec

Like mentioned above, the Ka-27 is too heavy and bulky for smaller vessels like corvettes and patrol boats. Apart from the Ka-62, a navalised version of the Ka-226 was being considered at one stage...
GarryB

Because it has no tail rotor the Ka-27 is actually a very safe helo for naval use and with main rotor folding can be housed in a very small area which is important on a ship.

Also keep in mind that when landing you put your nose into the wind. A sudden cross wind means rapidly turning the nose in a new direction... with a conventional helo with a tail rotor that means a dangerous swinging tail rotor... lethal in the confined area on deck.

For use on lighter vessels like Corvettes a lighter helo could be useful, but in that case a Ka-226T would probably be more useful... especially with its modular design.
TR1

For a corvette it would be fine... it is hardly going into the open ocean hunting US SSBNs afterall.

In fact a Ka-226T with perhaps a small wing with four weapon points holding perhaps the new light 7 shot 80mm rocket pods and Kornet ATGMs or perhaps Krisantema-M2 would be fine for the anti poaching and border patrol missions it is likely to be performing.

Fit a PKM fixed firing forward, or perhaps in a chin turret and you would have a potent little helo... in fact incorporate the weapons into the rear pod so that for armed missions against drug traffickers and smugglers and poachers you can fire warning shots right up to disabling high speed boats, while another pod might be fitted out for search and rescue with extra fuel in external tanks with internal capacity for two patients and an extra crewman plus a winch. Another pod might contain surveillance equipment including optics or radar that can be flown to a useful height with the data beamed to the corvette for processing.

I think it would be pretty useful for lighter vessels and that the replacement for the Ka-32 might adopt such a modular design too.
medo 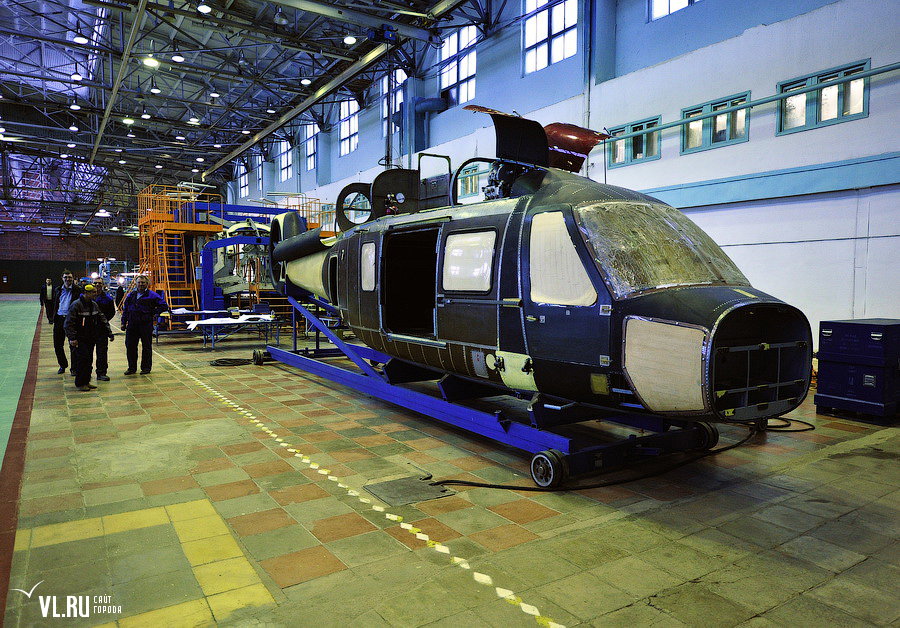 Military version of Ka-60 helicopter may be developed after 2016

Military version of Ka-60 helicopter may be developed after 2016, RIA Novosti reports with reference to the Deputy Minister of industry and trade, Yuri Slusar.
"We have considered two vehicles: Ka-60 and Ka-62. We and our colleagues from the Ministry of Defense decided to opt for the project I have already told you about. In late 2015 or early 2016 we plan to complete the certification of the helicopter’s civil version. After that the Ministry of Defense will elaborate the concept of the military version", — Slusar said.

Transas delivered three KBO-62 integrated avionics systems designed for Ka-62 helicopters to Kamov Design Bureau. The systems will be installed on Ka-62 prototypes and the flight testing will be started, press-service of Transas reports.
«The KBO-62 integrated avionics system allows performing a wide range of tasks in the area of navigation and piloting the helicopter. Thanks to integration between electronic display system and the ARDIDEN 3G engine’s electronic control unit (manufactured by Turbomeca), which powers Ka-62, it is easier to control engines during flight (including contingency power rating). At the same time the engine’s maintenance gets easier», - the company’s press-service explained.

According to the Director General of Transas Aviation, Vadim Smirnov, the company is “proud to take part in development of advanced Russian Ka-62 helicopter. During development of KBO-62 we used state-of-the-art technologies in order to assure a high level of flight safety, high comfort for the crew and a high level of the helicopter’s operating efficiency. The flight testing is one of the initial stages of our cooperation with Kamov and we are confident that our joint effort will result in creation of one of today’s best helicopters; this vehicle will be as good as the best foreign analogues».
George1

Ka-62 gearing up for maiden flight

Russian Helicopters: sanctions did not affect the cooperation in the network of Ka-62 project
Russian Aviaton » Monday June 29, 2015 17:36 MSK

Cooling in relations with Western countries did not affect the cooperation in the network of Ka-62 project, RIA Novosti reports with reference to Russian Helicopters CEO Alexander Mikheev.

“Relations with our western partners remain the same. This is a civil product. The sanctions do not apply to this segment,” Mikheev said.

The medium multi-role Ka-62 helicopter is one of the latest products of Russian Helicopters Holding Company, it was developed taking into account the highest standards in the area of safety, eco-efficiency and fuel efficiency. Ka-62 is able to carry from 12 to 14 passengers or 2,5 tons of cargo using an external sling. Ka-62 helicopters may be operated by oil and gas companies and participate in search-and-rescue operations.

Since March 2014 Western countries have imposed sanctions against Russia several times in connection with the situation in Ukraine. The latest sanctions were imposed in March 2015, when the US sanctions list was expanded.
Sponsored content