Russian made Scopes and Optics

PIN me with your email and I'll see if I can scan and send you some info on the NV/thermal Imagers. Sorry about the web site not loading????
GarryB

The thermal and night vision stuff is too expensive for me to justify really... expensive toys... not that I don't like expensive toys... I bought a Makarov based air pistol that was made in the factory that makes Makarovs and it is pretty much exactly like the real thing except the barrel and mag and the gas mechanism.

I don't shoot it much, but it is fun and is as good a replica as I need.

I also have a Baretta 92 blank firing pistol and a TT33 air pistol, and a PPK air pistol (I would prefer a PSM but can't get one).

Will PM you my address anyway...

What I am really looking for is a nice Russian bolt action rifle in 5.45 x 39mm and a compact light scope in the 1-4x range for close in shooting.
Kysusha

I'll catch up with you privately - but I think from my experience that you'll be pushing to get a bolt action Russian rifle in 5.45 x 39! I have in my collection a beautiful BARS 4-1 bolt action, timber stock, chrome lined barrel and fully adjustable trigger in 7.62 x 39 with a Wever 2.5x scope on it - great set-up. Knocks over anything out to 300 metres and I don't usually shoot beyond that. Time of flight allows the animal to move and you can end up just maiming them - not a good look. I prefer to limit my shots to around the 100 metres that way the shot has more chance of hitting where you aim without the animal moving its head etc. Deer are notorious for putting their heads down, grabbing a mouthful of grass and then suddenly lifting their heads to look around while they chew. You need to hit them the moment they touch the grass or wait for them to lift. [My experience anyway]. The BARS 4-1 is a great little rifle to take out when I don't need the full power 7.62 x 51. Easier to shoot, not so noisy and cheaper each round and still drops them cold.
miketheterrible

So we can put this to rest regarding using either French or Russian thermals for current and future tanks:

Russia has fully replaced components for tank sights from France

The Russian enterprise has completely replaced the thermal imagers for armored vehicles, previously purchased in France.

"The issue of supplies from France — it is the purchase of photodetector arrays cooled type (thermal), which are the basis of the sighting of the reconnaissance systems for tank-automotive equipment.These items were played, starting with this year supply of photodetector arrays for the "Uralvagonzavod" in the first place for tank production, is carried out with the Russian production. Addiction is a no-no," — said in the Russian government.

Russia really had difficulty after the imposition of sanctions and the refusal of the French partners to supply these products. "But with pre-emption was opened developmental work in NPO "Orion" and the concern "Schwabe" the extensive cooperation is of the Vologda optical and mechanical plant, Krasnogorsk optical plant", — explained in the government.

According to the "Rosoboronexport" at the end of 2013, Russia bought in France imagers for tanks and other armored vehicles, as well as the navigation system and communication system in an average amount of $150 million a year.


At the moment, the Vologda optical and mechanical plant has a contract with Rostec for the purchase of thermal imaging channel TPK-K for tanks T-72B3 and T-80БВМ, and most likely for the T-90M.

1.The subject of the contract

1.1. The supplier undertakes to manufacture and deliver and the Buyer to accept and pay for products, name, item, quantity, price and time of delivery specified in the Specifications (Appendix No. 1), signed by the Parties and forming part of the Contract.

1.2.The vendor is allowed to produce and ship products on a CD the letter "O", in accordance with the PP. 2 and 10 of Decision No. 3/6/63-2018 "About the order of introduction of thermal imaging cameras domestic production in sighting systems products T-72-BZM, T-80БВМ..." approved by the Deputy Minister of defence of the Russian Federation Yu. I. Borisov 08.05.2018 G.

TPK-K is used MFTV (the module of formation of the thermal signal) ФЭМ18М-03 NPO "ORION".

I recall that earlier in the sights of Essa, Pine-y and Sodema for tanks t-90A, T-72b3 and BMP-3M was used by the French matrix for thermal channel Catherine FC, which was made under license. Now it is planned to use domestic TPK-K with higher performance. The introduction of this product will allow the Russian tanks(and also quite possible and combat vehicles of infantry and armored personnel carriers) get rid of foreign dependence and the technological gap.

Excellent news, though not actually a surprise...

The Soviets went for LLLTV systems including sophisticated auto target tracking hardware and software which led to very capable systems like Shkval for the Ka-50/52 and the Su-39, that has also been used in Tunguska and Pantsir and also TOR and Kornet.

The west went for thermal imagers and had a lead in design and production, but that lead no longer exists in practical terms.

New systems seem to be focused on combining technologies... so image intensification and thermal and video, but with MMW radar and other technologies to add dimensions to the detection and tracking ability of a combined system...

I have managed to buy myself a Bars-4-1 rifle... I managed to get it rather cheap because the rifle I bought in in 5.6x39mm calibre... which is otherwise known as .220 Russian.

I got it cheap because it is very hard to get ammo for here... the round itself is basically a 7.62x39mm round necked down to a .22 calibre bullet.

A 5.45x39mm round has a much smaller case, but I would have preferred it as the ammo is easier to get than the 5.6mm ammo I need.

I see Tula Ammo produce the ammo and it actually looks like an interesting round... a shorter fatter .223 really with more shell case room for propellant... but obviously it is so close to a .223 round or a .222 round in performance the odd Russian round never really had a chance.

Haven't decided what I am going to do with it yet... I guess my options are to either hand load, or rebarrel to 7.62x39mm or perhaps rebarrel to 5.45x39mm... or perhaps even get a chamber insert and use it for .22WMR or something weird...

Anybody here who can ID the optics mounted on the rifles in the picture below? Thanks in advance ! 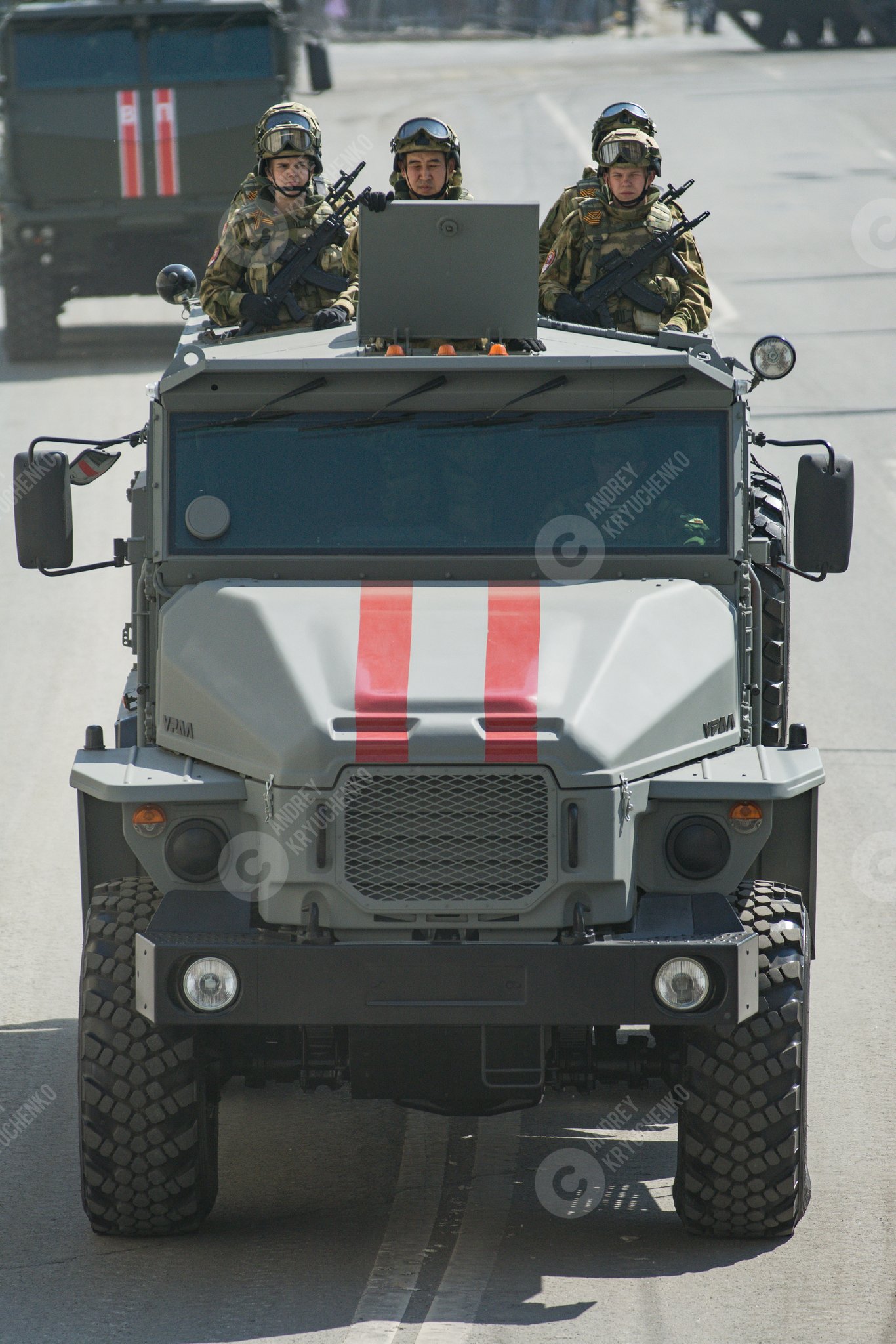 Currently Shvabe provides older versions of thermal night and day vision sights for the gear Ratnik and keeps working on their upgrade. As far as thermal vision sights are concerned, it is essential to reduce their mass.

"Before, the sight had seven lenses, which made it rather heavy, 1.5 kilograms. New technological solutions have enabled us to replace seven lenses with two, which cope with the same functions. The sight’s mass has been reduced dramatically. Its new version for the Ratnik gear is about 400 grams," Popov said.

Technology of increasing the aiming range

The holding company Shvabe has also developed a unique technology of cutting the reticle (sighting grid) of optical instruments that dramatically increases the aiming range.

Before, the sighting grid was created by means of photolithography, a process of transferring geometric shapes on a mask to the surface of a silicon wafer. Sights made this way were enough to achieve desirable fire accuracy at a distance of no more than one kilometer.

"Now the sighting range has increased to two kilometers. At such a distance the size of the target is close to the thickness of crosshairs. And at a certain point the target becomes invisible. We’ve devised a technology of cutting the reticles with a laser beam. Sights manufactured the new way considerably increase the sighting range," Popov said.

An upgraded sight Sodema, originally created for the weapon systems of the armored personnel carrier BMP-3 and other armored vehicles, will be used on the T-90 main battle tanks, Sergei Popov told TASS in an interview on the sidelines of the aerospace show MAKS-2019.

"We have plans for using this sight [Sodema] for upgrading the T-90 tanks," he said.

Sodema was originally developed for the armored personnel carrier BMP-3, but it will be installed on other light armored vehicles and also used for upgrading foreign vehicles under military-technical cooperation programs, Popov said.

Equipping armored vehicles with the new sights under the upgrade program will take an estimated two to six months.

"Sodema has begun to be produced serially. Reconfiguring it for use on other vehicles will be easy," he added.

The international aerospace show MAKS-2019 is being held in Zhukovsky, near Moscow, on August 27-September 1 as organized by Russia’s Ministry of Industry and Trade and Rostec corporation. The show has attracted 827 companies from 33 countries, including 184 foreign firms.

Currently Russian troops use the combat gear Ratnik of a second generation. In the near future Ratnik will incorporate new elements being created for the next generation gear, Ratnik-3, such as medical sensors, land mine-proof footwear and an electronic visor enabling a soldier to shoot at the enemy from around a corner. Ratnik-3 will provide the same degree of protection but will be four kilograms lighter than its predecessor. Research is underway to complement the combat gear with an exoskeleton and a drone.

Shvabe is a holding company affiliated with the government-run corporation Rostec. It consists of several dozen organizations, which constitute the backbone of Russia’s optical industry. The holding’s affiliates implement the full cycle of creating the newest optoelectronic and laser technologies for national defense, state and public security and civilian industries.