I wonder if any of the -10MN accidentally made their way into Donbas?
franco

I wonder if any of the -10MN accidentally made their way into Donbas?

They do have some Strela-10 that they captured back at the start, not sure what model.
GarryB

Having IR guided missiles like this is useful as they are essentially fire and forget, but the new Pine SAMs based on the SOSNA missiles are just so much better.

The first models are laser beam riding, which means anything the launcher can see and track can be engaged, and their flight speed is enormous so they get to 10km targets in about 10 seconds or so... this is outstanding because it means in 15 seconds you are ready to engage the next target even out to max range, but much of the time the target will be a 5-6km range so 10 seconds later you can find your next target and engage.

Laser beam riding missiles against air targets you can lase the target to get a precise range and closing speed so the laser beam the missile flys down can be pointed 20m above the target till it gets within 1km of the target so the target wont even know it is being engaged till about a second before impact and chaff and flares and DIRCMs wont help because the missile is looking for the laser beam back at the launcher, not reflecting off the target.

IR guided missiles are very useful too and should be able to be fired on the move if needed, but then so should Pine.

Both systems are excellent for low emission use and sneaky attacks and while its range is only 5km, the Strela-1MN with a significant warhead would be very useful against higher flying bigger targets too.
medo

I wonder if any of the -10MN accidentally made their way into Donbas?

Strela-10MN are in VDV units, so most probably not, but some missiles could, to increase defense capabilities against drones.

Russian troops to start getting first Gibka-S VSHORAD in 2022

Iosif HAKOBYAN Doctor of Technical Sciences, Academician of the Russian Academy of Sciences

This is dumb. Micro-missiles have insanely short ranges and weak payloads - exactly the opposite of what you want against UCAVs which frequently loiter at just beyond the engagement range of a defender. For micro-uavs which are frequently used to spot for artillery they can be useful, but really its a half-baked solution. Your SAM would hardly be able to provide air defense coverage for all the units in a formation, and they will tend to spread out just out of operational necessity so the protection it offers is effectively nullified anyway. The only real answer is a low level C4ISR infrastructure where every unit not even just the AD can spot for and engage air targets in a shared picture. It might not seem much, but modern vehicles with guns and missiles slaved to automatic fire control systems do stand a decent chance of intercepting even the dreaded micro-uavs, especially with proximity/time-fuzed ammo - they just have to spot them first.
GarryB

I thought it was interesting, it mentions a US missile that is about 3kgs and has no warhead, but it goes on to compare command guided missiles and ARH missiles and their performance differences in terms of a mass attack.

It appears to show that hit to kill accuracy for the ARH missiles make them more efficient in dealing with mass attacks of drones or rockets or artillery shells or combinations.

I would say that cost is not everything, but being prepared for anything is important so I would say a mix of command guided as well as ARH and perhaps even some IIR guided missiles should be considered.

ARH and command guided use radars for target detection and tracking and engagement or guiding the outgoing missile to the target so they work in all weathers day and night and in the presence of smoke or dust or aerosols or snow or rain or whatever.... ARH is more expensive but also more accurate and allows more targets to be engaged at one time.

It mentions a three or four sided fixed radar is expensive, but I would think it would be worth it because 360 degrees could be electronically scanned meaning super fast update rates for very high speed targets or small targets.

IIR sensors and missiles would allow even the lowest RCS target to be engaged in the right conditions.

Because of all this I would suggest a mixture of IIR and ARH and command guided missiles in the 10-20kg weight range with a small proximity fuse for use against very small targets.

We don't know much about 9M100 but I suspect it will be rather bigger than this, but there was talk of IIR and ARH versions for aircraft and ship and and vehicle applications... I would think having a mix of missile types would make sense but with the S-350 system we are talking 48 missiles per TEL, while this new missile they are talking about will have hundreds of missiles per launch vehicle.

With a fixed four face phased array radar and a mix of IIR and ARH and command guided missiles depending on the situation it would be excellent for all sorts of situations.

You could deploy ARH in high threat areas and have it as a last ditch defence system with other systems or even as part of a convoy watching out for TOW type ATGMs and Javelin launches... obviously not much use with an RPG launched from 20m, but that would be the job of an APS anyway.

In other situations it might also provide general air defence as well so a few command guided missiles could engage larger drones or light aircraft cheaply and efficiently... or in good conditions an IIR guided weapon could be used as a fire and forget system too.

They could unify the design so that it is essentially a scaled down SA-15 TOR missile, where the standard TOR has command guidance, while these smaller missiles carried on a trailer in much larger numbers might include ARH and IIR and command guided smaller missiles optimised for drones or artillery shells or small hard targets.

Perhaps a unit of four vehicles operate together each with two face array radars where two vehicles operate their radars at once providing 360 degree coverage while the rest just have missiles... 200 missiles per vehicle, making a four vehicle unit able to deal with up to 800 targets, with perhaps a 57mm gun vehicle operating with it, and EW/DRCMS vehicle to jam and defeat the fuses and guidance of some incoming weapons or blind optically guided weapons or their operators.

This new weapon is a Verba or Igla or double their weight weapon, so 1/3rd lighter than Kornet... perhaps a Bulat sized weapon?

What you're proposing is a concentrated, hyper-dense system when what you really want is distributed protection. Lots of shooters and spotters eventually add up. Even just knowing which general direction a drone operates is enough for infantry to disperse and hide, minimizing potential casualties in a strike.

And another thing - remote operation ought to be a must for tactical air defenses, especially those that have radars. Part of the reason for the losses is that the AD haven't been nearly been aggressive enough, as crews spend a lot of time either not utilizing their active sensors, or worse, they are away from their vehicle. It probably wouldn't cost as much to relocate the control cabins to dedicated APCs so their risk is effectively minimized.
Hole 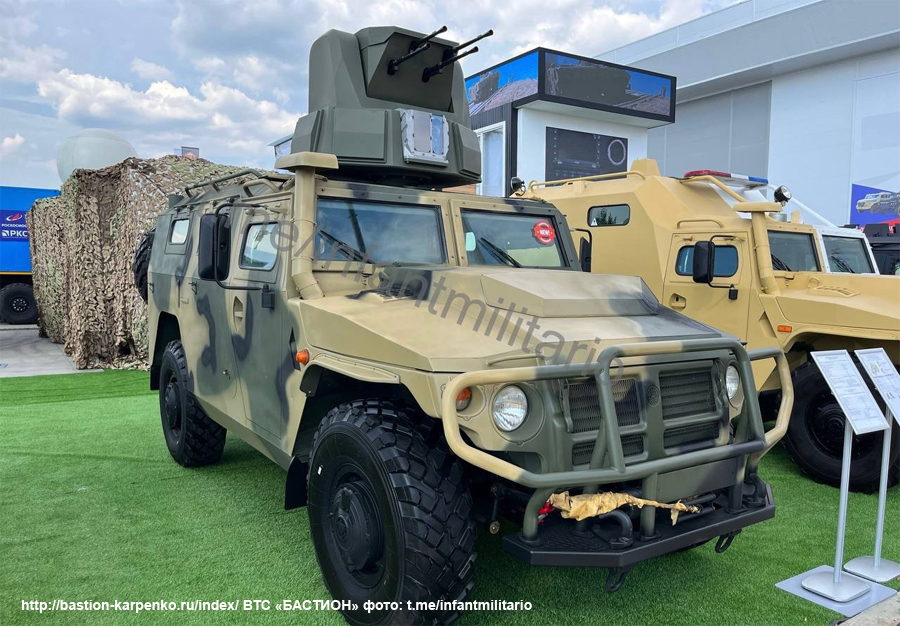 I would have thought a four barrel gatling would be more compact... either in rifle calibre or 12.7mm calibre... both of which already in Russian service.
Hole

4 single 12,7mm guns are easier to maintain. Also if a Gatling gun malfunctions it´s useless while with that installation you still can use the 3 other guns.
Sponsored content