Although Kinzhal is supposedly out of production.....yeah I think they will just keep Osa

Perhaps they could unify the design and use TOR-M3 missiles at sea?

Just use the drop in vertical launch tubes without the naval rotary arrangement to increase the numbers of ready to use missiles.

The missiles themselves are cheap and making a few extra 10,000 for naval use will make production even cheaper overall.


BTW to be of any use all future new and upgraded vessels need Sigma to be installed to share data and provide communications.

Inclined launch bins for UKSK launchers would not be that expensive and the result is the withdrawl of an old missile system that would need a separate set of maintainence and handling tools to keep in service.

Standardisation really only works if it is fully implemented as quickly as possible.


Maybe replace Osa and the AK-630s with Palma.

Palma is low cost alternative... they want to protect these old ships so I say Duet guns, Pantsir-S1 gun/missile systems, and TOR-M3 based missiles in new compact stealthy mounts.

The enormous array of sensors and antennas can be consolidated into a few systems to reduce weight and improve performance.
runaway

Now with the Komsomolets, then Admiral Flota Lobov nowUkrayina ("Ukraine"), it will for sure be scrapped. A pity it wasnt moored at sevastopol...

runaway wrote:Now with the Komsomolets, then Admiral Flota Lobov nowUkrayina ("Ukraine"), it will for sure be scrapped. A pity it wasnt moored at sevastopol...

what happened to this after crimea annexation? still in sevastopol??
George1 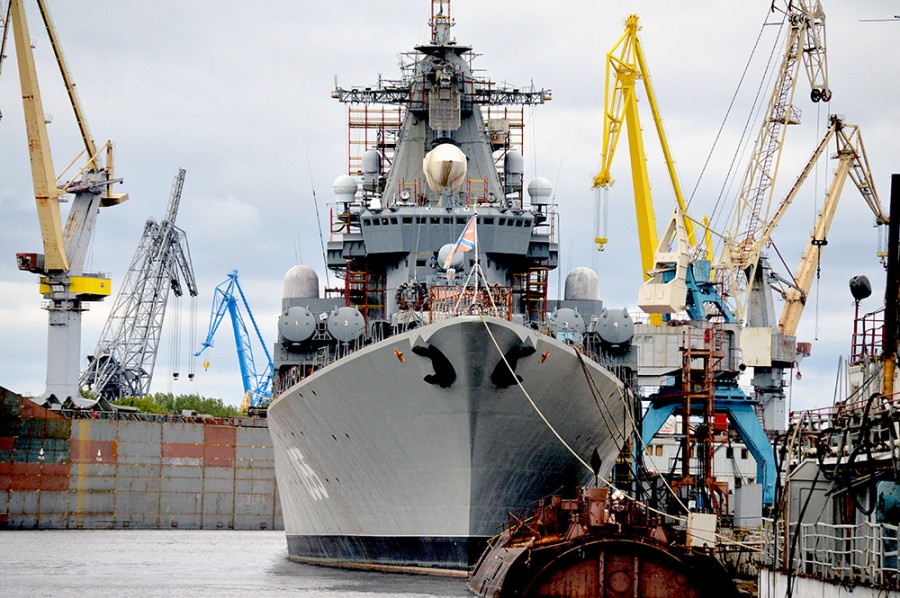 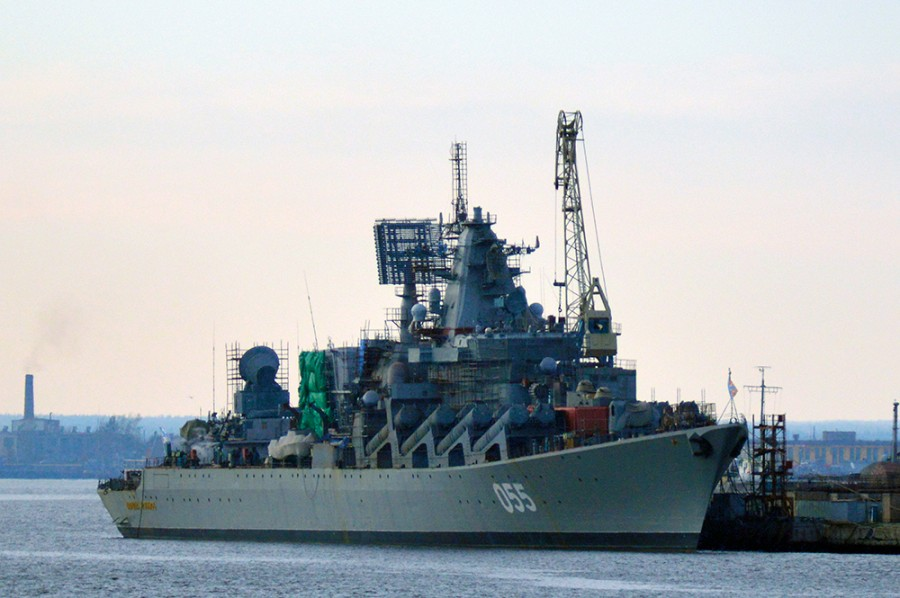 The S-300F radar is still there, but has scaffolding ...
runaway

The Slavas are beautiful and massive ships, and refitting them makes alot of sense since new cruisers will be a very long way of.
With modern electronics they will be up to date, but i notice the sandbox missiles is still there, perhaps it isnt doable with VLS cells on her? What about Sam´s, is the OSA-M still there?

Should the Slava class be modified?

If you were in charge of a Slava class refit, what would you guys add?
flamming_python

Naval Fan wrote:If you were in charge of a Slava class refit, what would you guys add?

- Certainly those 3-missile UKSK tubes in place of the current Bazalt launchers. Although.. it might make sense to keep the Bazalt launchers on 1 of them at least, until the supply of missiles are exhausted.
- Leave the S-300PMU as it is, maybe some electronics upgrades to bring it closer to S-400 standard but nothing complicated.
- Replace the OSA-M with the Yozh (Tor-M1) system
- Leave the AK-130 as it is
- AK-630 replaced with the AK-630M-2 Duet
- RBU-6000 replaced by the Paket-NK complex

And of course upgrades of radar and sensors for the new weapons, and in general to replace the oldest stuff

As you can see, quite a lot of upgrades; but nothing revolutionary. More like evolution.

the external Bazalt launchers present a problem because the replacement system is vertical internal UKSK launchers... if you take off the external angled twin launchers to fit UKSK launchers you need to remove everything below the deck where the old missiles sat... which might include a lot of important stuff.

I think having an 8 tube launcher angled on its side to replace each twin launcher would be the best solution in the longer term as shown tested on this smaller ship. the main problem of course would be that rather than being a 360 degree launcher, it would be rather more directional... not so bad for the anti ship and land attack missiles, but for the anti sub rockets it becomes more restrictive.

If you want an upgraded Slava class then you want it as a command ship at the centre of a group, so I would replace the S-300PMU with S-400 with no moving parts like loaders etc... just one cell one missile... and for the same reason replace the old Osa with current model Naval Tor.

Upgrade all the sensors/radars/electronics to improve performance and communications capabilities and install the Sigma battle management system.

I would replace the AK-130 with a single twin barrel Koalition 152mm gun, though a 203mm version would be better for a cruiser leaving the 152mm guns for destroyers.

I would add four 57mm gun turrets for CIWS use with laser guided shells and Pantsir-SM turrets for extended engagment of aerial threats.

PAKET-EM self defence anti torpedoes would round out the armament.

I would upgrade all three with one in the Northern Fleet, One in the Pacific Fleet, and one in the Black Sea Fleet just to scare NATO...

however russian military sources indicate that modified or modernization in that extent of such big ships is more expensive than to built a new destroyer/cruiser. So especially for such less amount of ships i dont think that there is any possibility for modification in weapons carried and launching systems

they need to focus on producing frigates and destroyers and corvettes right now... a brand new cruiser would take time.

These are not cheap, but the whole point of standardising weapons and propulsion and sensors and systems is to make it simpler and cheaper to expand and grow the designs and to operate from isolated ports... when all ships have UKSK launchers then all ports will be able to offer support and ammo... previously if Slava went to a smaller port there would be no Bazalt missiles, or even if they went to a bigger port they might have Granits, but not Bazalts.

With this upgrade all ports will have Calibr and Onyx and Klub and soon Zirconium.
TR1

After this (light) modernization, they will live out the rest of their lives and then be scrapped.

I think that is far away the likeliest scenario here. Given how long it took to even start this round of modernization (Ustinov stood @ Zvezdochka since 2011), I shudder to think how long more serious work would take.
runaway

The Slavas are 30 years something, and the sensors and weapons are old. Replacing the Bazalt with UKSK below deck is an enormous and almost impossible task.
I think the most wise thing to do would be a small modernization, like sensors, radar and such, overhaul of machinery etc. The older a ship is the more maintenence it needs and combat value decreases.

Better to give resources to the new destroyer class, smaller crew, stealthy, UKSK for multiple missions, reliable machinery and equipment and low maintenence.

runaway wrote:The Slavas are 30 years something, and the sensors and weapons are old. Replacing the Bazalt with UKSK below deck is an enormous and almost impossible task.
I think the most wise thing to do would be a small modernization, like sensors, radar and such, overhaul of machinery etc. The older a ship is the more maintenence it needs and combat value decreases.

Better to give resources to the new destroyer class, smaller crew, stealthy, UKSK for multiple missions, reliable machinery and equipment and low maintenence.

That's what I'm saying. Upgrade, but be economical.

As for the UKSK, those angled tube-UKSK launchers, the ones that fit 3 missiles each - are perfect for the Slava. It would be a matter of replacing the Bazalt tubes with them, 1 for 1. No need for any work below deck. Electronics upgrades will be necessary though, new command/launch systems and so on.

Electronics/guidance/sensor upgrades can be made to the S-300PMU system, new missiles fitted, and the Slava's radar systems upgraded - again with no extensive work needed, there is nothing revolutionary here - but the capabilities will increase perhaps even x1.5 fold.

Taking off the RBU-6000 costs no money.. replacing it with the Paket-NK does, however I would think that the Paket-NKs can be fitted with an adaptor of some kind for launch from 533mm torpedo tubes which the Slava already has. Maybe I'm wrong.

Replacing AK-630s with the AK-630M-2 Duets is a 1 to 1 thing too. They don't weigh too much more, and use all the same ammunition, so the existing mounts and infastructure should be adequate - it's just a firepower upgrade.

The biggest job will be replacing the OSA-M rotating launcher with the Naval Tor. However it's quite neccessary. The Tor missiles have about the same range as the old Osa ones, but are far superior. What's more, the electronics associated with the naval Tor installations, so I read, co-ordinate well with CIWS systems - the efficiency of the AK-630M-2s will be considerably enhanced by the Tor's radar, management and fire-control systems. The Slava will be a lot better protected.

Just let her rest in peace and do minimum upgrade just to allow her viability before her successor take over her role.

For the shape of upgrade though.. i think refurbishing her air defense suit would be nice. Nothing can be done on those 16 Bazalt launch tubes..At best perhaps is to make "insert" So it can have say.. 4 oniks/Kalibr inside.

As for the UKSK, those angled tube-UKSK launchers, the ones that fit 3 missiles each - are perfect for the Slava. It would be a matter of replacing the Bazalt tubes with them, 1 for 1. No need for any work below deck. Electronics upgrades will be necessary though, new command/launch systems and so on.

The triple launchers are for Submarines AFAIK... the OSCAR class were getting three UKSK tubes for each Granit tube.

If you are going to do that why not fit a full size UKSK 8 tube launcher on an angle in place of the two Bazalt launchers... for 64 missiles instead of 16 (original load) or 48 (replacing 16 with triple launchers)?

If you want to put in new electronics pretty much all the old electronics and wiring would have to go.

it would be a nightmare trying to mix the wiring and electronics to have a 21st century SAM and RADAR system operate with 1980s SAMs and radars and sensors.

If you are going to upgrade the Kirovs then a modest upgrade of the Slava class makes no sense, except that there are few yards in Russia that can handle production of very large ships and from 2020 they will be working on new carriers... which will need large ships to operate with them.

A minimum upgrade is a waste of money... just leave them as they are and use them for 10-15 years, or give them a real upgrade and keep using them for 20-30 years.
TR1

4 per tube, and I am pretty sure the system on subs is not calles UKSK, though they might be related. We saw the steel tube cutouts in an AlmazAnteii vid
George1

Despite the difficulties, the repair of the cruiser "Marshal Ustinov" will be completed in 2015
Ugen

George1 wrote:what happened to this after crimea annexation? still in sevastopol??

it has never made it to sevastopol. it is still lying at its construction site in mykolaev (=ukraine). thats the point dude...

I wonder if 30N6 will take its place.

Another view of the modernized Ustinov with the Fregat-M2.
Vympel

Another view of the modernized Ustinov with the Fregat-M2.

Both images are identical sorry.
TR1

Oops, here is the Ustinov one: 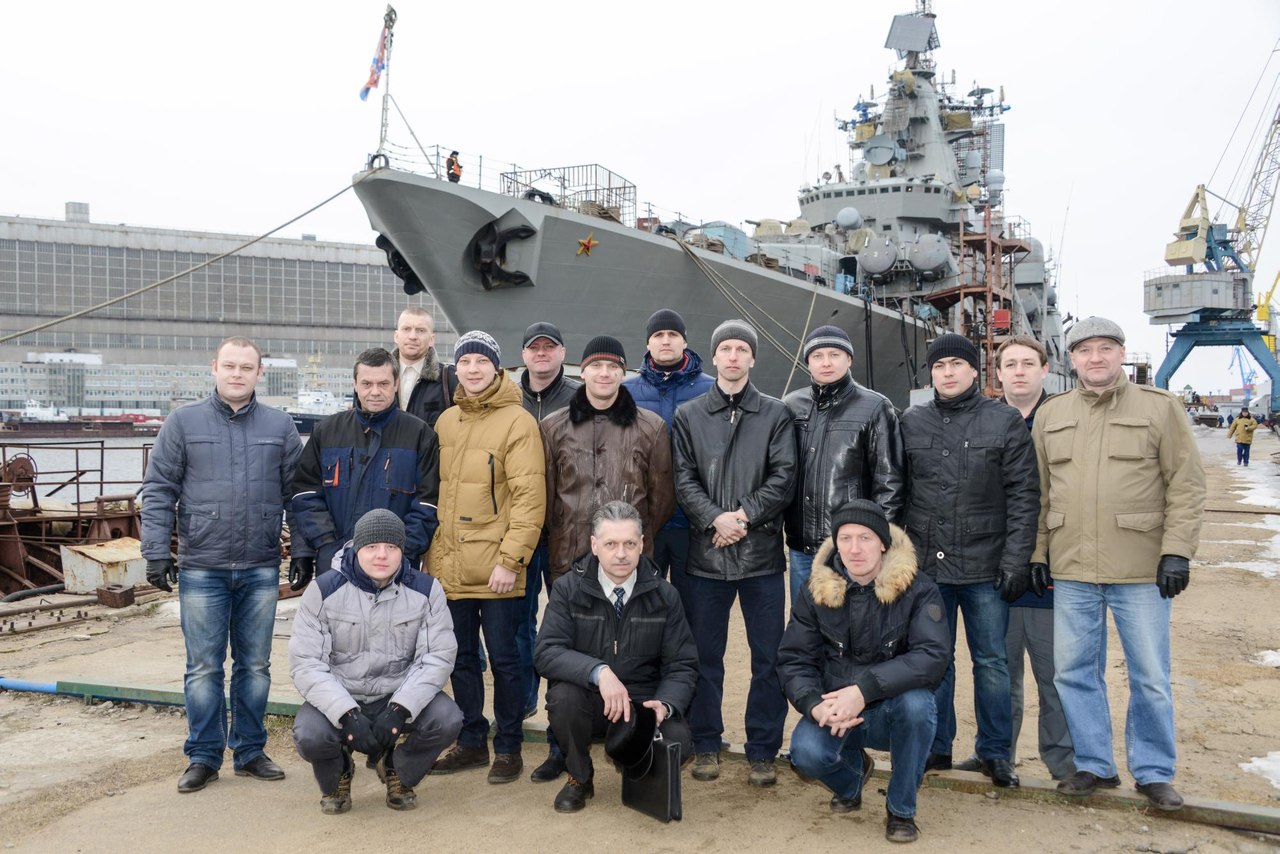