Bit too low quality to really tell but something is going on around the missile tubes & they may have removed the scaffolding around superstructure.
Ned86 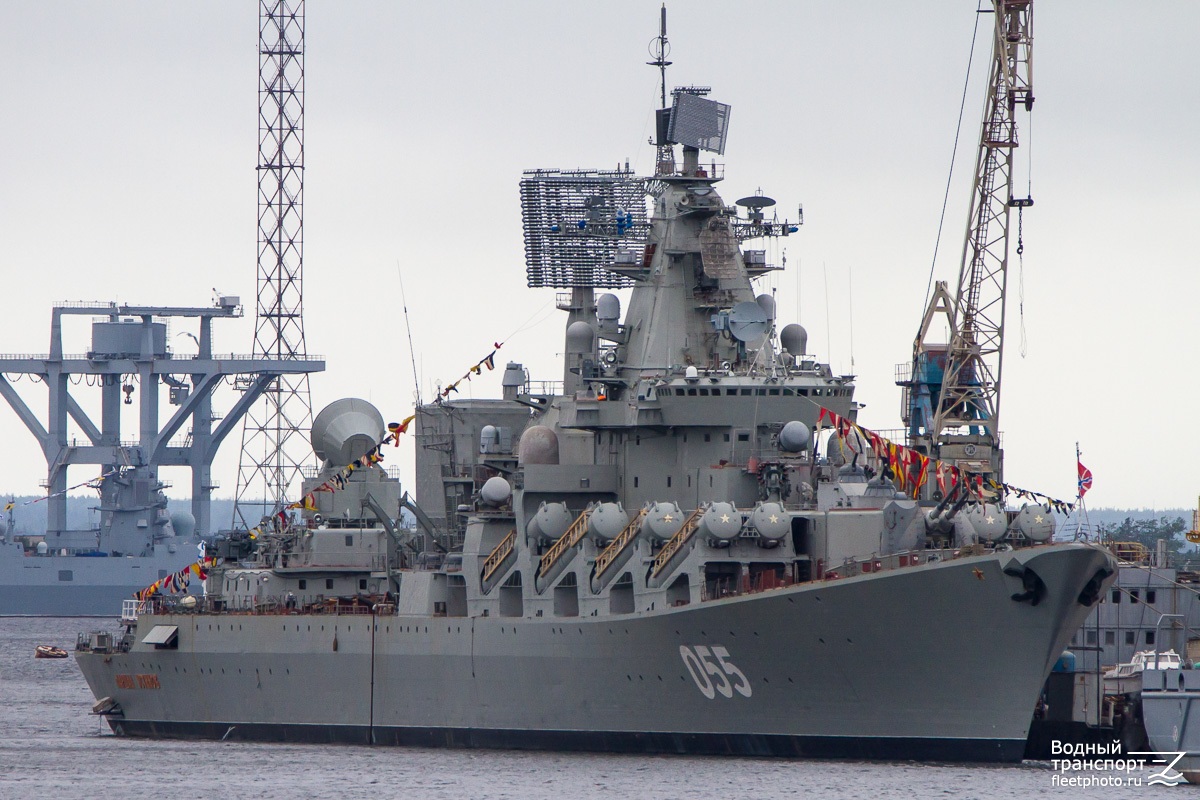 Varyag and Moskva next, and cannot wait to see the uber-Nahkimov when she emerges from her rebuild....

What is the orangey stuff on the missile tubes?
Benya

hoom wrote:What is the orangey stuff on the missile tubes?

Maybe those are support frames that are used when the missile tubes were placed there by crane.

Az first glance they looked like ladders to me

Has lost the 'ladders' 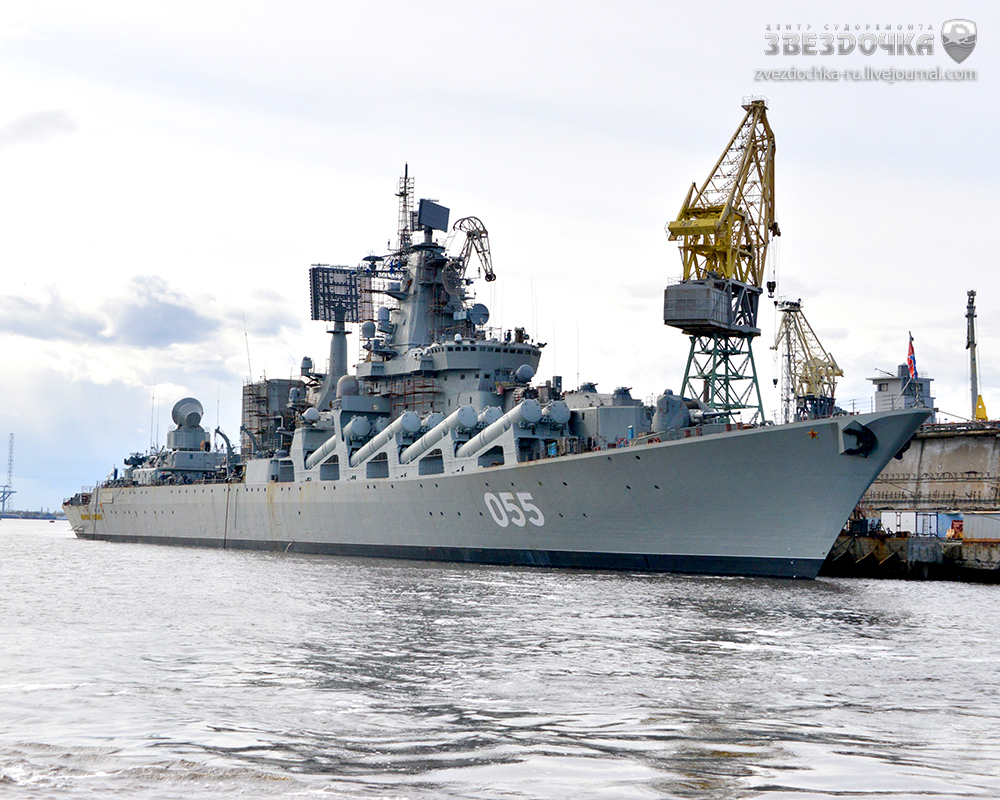 According to http://zvezdochka-ru.livejournal.com/381749.html they are about 1/2 way through mooring trials, expected to go to sea trials by the end of the year.
Has had problems with sub-contractors not being up to the task apparently

Yandex translate wrote:The main problematic issues VTG "Marshal Ustinov" are setting up the system of control of main engines, repairs of refrigeration equipment and commissioning works on control system power system of the ship.
The delay in completion of set tasks linked to a number of factors.
"Asterisk", specializing in the repair and modernization of submarines, for the first time faced with such a volume of new work on surface ships of cruiser class.
Poorly prepared for this appeared and contractor organizations. Today business partners has the main task to eliminate delays in the repair of the cruiser, about what exactly was said in the text of the Protocol of the meeting.
The limiting factors were the late delivery of the documentation management system main engines from design organizations, its incompleteness, long-term commissioning work and the identification of emerging faults, the novelty of this automation system.
Also for the first time aginskoj the shipyard had to do repairs of refrigeration equipment.
Besides the fact that they have a thirty-year period of operation, the manufacturer sank into oblivion.
Analogues in Russia such machines as well as specialists in their maintenance and repair.
The company "VNIIKHOLODMASH" ( Moscow), who undertook their restoration, showed their complete incapacity and incompetence in the repair and adjustment of equipment.
The delay in final commissioning of the machines in operation does not give in full and with appropriate quality to carry out mooring trials of such major systems such as weapons systems, communications, radio AIDS.
The lack of experience and experts from the co-executor of work hinders this process.
However, until the end of the month work on refrigeration vehicles must be completed.
A similar situation exists for control system of gas turbogenerators due to low qualification of specialists of the counterparty involved in the repair and commissioning of the system.

That image is an earlier one than the one showing ladders - you can see scaffolding on the starboard side of the fwd superstructure and funnel.
hoom

There is also a letter out there I think something to do with no longer available Ukraine stuff? http://bmpd.livejournal.com/2131185.html (image of Russian text so can't Google/Yandex translate)
Big_Gazza

Some new photos of the Ukrayina from Southfront: This is why the Ukrops cannot have nice things...

Big_Gazza wrote:Some new photos of the Ukrayina from Southfront:

This is why the Ukrops cannot have nice things...

And i thought the Russian navy was in bad shape, this thing looks downright haunted, just in time for Halloween.
KiloGolf

Big_Gazza wrote:Some new photos of the Ukrayina from Southfront:
...
This is why the Ukrops cannot have nice things...

And i thought the Russian navy was in bad shape, this thing looks downright haunted, just in time for Halloween.

You can't compare the Russian Navy to Maidan's one-frigate flotilla.
Pity these guys get to keep Nikolaev shipyard and related facilities.
hoom

I'd always assumed it wasn't finished due to being far from complete, not much more than an empty hull but it looks like it was actually pretty close to finished & I can understand why Russia was looking at buying it to complete for a while, a shame.
flamming_python

This ship sums up the Ukraine itself quite aptly.
zg18

What was upgraded ? Is it a new radar on it ?
franco

"Shipbuilders JSC" Center of repair "Zvezdochka" completed the repair and modernization of the missile cruiser "Marshal Ustinov" Project 1164 "Atlas". On Sunday, October 30 cruiser went to sea for the program factory sea trials ", - said in a statement.

on modernization and restoration work began in ship repair Center "Zvezdochka" in 2011. During this time the program is executed dock work, repair of gas turbine generators and main engines with associated systems, general ship systems. Modernization work, in turn, affected the main complexes of electronic armament of the cruiser. During the tests, the experts of "Asterisk" with the crew of the cruiser will check all systems and mechanisms of the ship in sea conditions.

Go to the place of permanent basing missile cruiser "Marshal Ustinov" is planned for the IV quarter of 2016, says the company.

NOTE: Basically body work and engine job for a mid-life extension along with an electronic upgrade.
zg18

Isos wrote:What was upgraded ? Is it a new radar on it ?

What was upgraded ? Is it a new radar on it ?

This was going into repair (via Balancer forum) could have been a 48* Calibr/Onyx salvo.

hoom wrote:
Big question if they upgraded the S-300/how much &/or if they put Calibr launchers in the Granit tubes. Apparently not though which I think is a huge lost opportunity

could have been a 48* Calibr/Onyx salvo.

no way.. i think upgrade was in electronics and main engines control systems only
GarryB

Well, if they are replacing the Granit launchers in Oscar class SSGNs with three tubes of Onyx or Kalibr, then replacing the Vulkan launchers with Onyx/Kalibr tubes should not have been impossible... though Vulkan is angled heavily... much more so than Granit.

GarryB wrote:Well, if they are replacing the Granit launchers in Oscar class SSGNs with three tubes of Onyx or Kalibr, then replacing the Vulkan launchers with Onyx/Kalibr tubes should not have been impossible... though Vulkan is angled heavily... much more so than Granit.

It's not a problem for Onix, Russian modified Nanushka class and some Indian destroyer use them this way. But I don't think it's the case for Kalibr. Maybe the submarine lunch version could as it can be lunched by torpedo tubes but surface version are design to be lunch by VLS.
GarryB

They did have a test rack for the Nanuchka boats, but we really don't know the results as to how that actually performed in those tests.

An angled launch should not be that much of an issue...
hoom

Some footage, includes some of the going into refit & leaving the dock at the end.

They seem to say 'Caliber' quite a bit in it?
Whats with the below waterline circle thing they are welding/grinding?
Sponsored content