With the support of Western allies, Vietnam is capable of inflicting serious damage to the People's Liberation Army in a potential war over the disputed South China Sea, according to Kanwa Defense Review, operated by Canadian military anaylyst Andrei Chang, also known as Pinkov.

Chang cited the example of the Falklands War of 1982 between Britain and Argentina to illustrate his point, stating that the Argentine Air Force successfully sank or damaged six British Royal Navy ships with only five French-built Super Etendard fighter aircraft and 48 obsolete US-built A-4 Skyhawk attackers, though Argentina was ultimately defeated. The magazine stated that five French-built Exocet anti-ship missiles with a range of only 50 kilometers with which the Super Etendards were equipped, played the most important role in sinking and damaging the British ships during the conflict over the British islands in the South Atlantic, claimed by Argentina as the Malvinas.

The second Exocet missile launched from one of the Super Etendard aircraft sank the HMS Sheffield, a British destroyer while the third and fifth missiles fired hit the SS Atlantic Conveyor, a British merchant navy ship requisitioned for the war, and County-class destroyer the HMS Glamorgan. The Argentine Air Force used its greater numbers, at one point deploying 30 A-4 attackers to launch a single attack against the British forces. With a weaker naval combat fleet, the Kanwa Defense Review said that Argentina had conducted a successful guerrilla warfare campaign against the Royal Navy with its limited air power.

The same kinds of tactics could also be used by the People's Air Force of Vietnam in any future conflict against the PLA Navy, according to Chang. Vietnam has a total of 32 Su-30MK2 fighters, introduced from Russia, which are are able to carry Kh31 anti-ship missiles while the Chinese Su-30MKK cannot. If China wants to upgrade its Su-30MKK, it must pay an additional fee to purchase the missile system from Russia.

The article stated that the Vietnamese Su-30MK2s are capable of launching precision attacks against PLA naval bases in Yalong Bay in Hainan, where Type 052D destroyers and Type 094 Jin-class ballistic missile submarines are stationed, without even leaving Vietnamese airspace. The article went on to say that, in addition to the Su-30MK2 and Kh31 missiles, Vietnam only needs between two and three missiles fired from the Bastion coast defense system to sink a Chinese aircraft carrier.

The British experience of deploying five nuclear-powered submarines to the Falklands can provide the Vietnam People's Navy with an important lesson in confronting a Chinese carrier battle group in the South China Sea, the piece said. The Royal Navy was able to prevent the Argentine Navy from leaving its base following the sinking of the General Belgrano by the Royal navy submarine Conqueror. The article said that the People's Navy of Vietnam, with better submarines than China, may be able to do the same thing to China.

The article also stated that China would not enjoy diplomatic support from Western powers, as Britain did in the Falklands campaign.
Viktor

And with the help of Russia and China friend, Vietnam is able to inflict serious damage to US allies

Yep! Heck, even a country like Kazakhstan could do a lot, with Russia of course!
higurashihougi

That event did happen in the past. With weaponary support from Socialist Bloc, Vietnam shot down U.S.'s 16 B-52s in Hanoi's sky 1972.

Vietnam being a good friends with China and Russia will be very nice for all the three countries. But at the moment, there is little mutual trust in China-Vietnam relationship. In fact the East Sea disputes is pushing Vietnam closer to the Phillippines, Japan and the U.S.

Building a healthy and reliable connection between Vietnam and China is not an easy task. It needs a big heart and a big brain.

Vietnam has carried out significant land reclamation from the disputed South China Sea, according to satellite images taken by the Center for Strategic and International Studies [CSIS] last month.

The pictures reveal land expansions at Sand Cay and West London Reef, both part of the Spratly Islands, one of the sea's major archipelagos comprising more than 30,000 islands and reefs.

Areas of the South China Sea, and particularly the Paracel Islands and Spratly Islands, are subject to competing territorial claims from a number of surrounding countries: China, Taiwan, Vietnam, Malaysia, Brunei, and the Philippines all make various claims to areas of the sea.

The largest territorial claim to the South China Sea comes from China, defined by the 'nine-dotted line' used to demarcate an area including the Paracels and Spratlys, known in Chinese as the Xisha Islands, and the Nansha Islands respectively.

In its report accompanying the pictures, CSIS said,

"Between August 2011 and February 2015 significant upgrades were made to [the island of Sand Cay]," adding that its land mass had expanded from 41,690 to 62,970 square meters, and now boasted "defensive structures" such as trenches and gun emplacements placed there by the Vietnamese.

The revelation follow images released last month of China's land reclamation work in the South China Sea, which revealed the construction of transport facilities, including a runway, on Fiery Cross Reef in the Spratly Islands.

"China's work on the islands mostly serves civil purposes apart from meeting the needs of military defense. China is aiming to provide shelter, aid in navigation, weather forecasts and fishery assistance to ships of various countries passing through the sea," responded Xinhua in a commentary following the reports.

On Friday China's Foreign Ministry Spokesperson Hua Chunying commented on complaints from Philippine officials about Chinese construction on the islands, saying: "China's sovereignty over the Nansha Islands and their adjacent waters is fully supported by historical and jurisprudential evidence," and added that, in turn the construction by the Philippines of an airstrip on the island of Zhongye Dao is "illegal expansion and construction," on "islands and reefs grabbed by the Philippines."

Chinese websites have published satellite images that appear to show Vietnam's construction of artificial islands in the Spratly archipelago, but also that its efforts ended up being washed away by the sea.

The publication follows pictures that were published by Chinese website Baike in December, which show the whole of the reef, including the area of reclamation.

The most recent images appear to show two islands that were built by dredging sand, which then lost their battle with the tide.

"However, Vietnam's low levels of technology eventually led to the sand being washed away in a storm, and almost no progress," China Youth Network commented on Vietnam's attempts at building islands.

"In December last year typhoon Jasmine suddenly visited, which upset the Vietnamese calculations – the filled reefs were blown away by the typhoon," the website reported.

It triumphantly contrasted China's "more efficient" method of dredging up sand by using self-propelled cutter suction dredgers, rather than using a backhoe dredger like Vietnam.

"Constructing reefs is not as simple as it looks," China Youth Network concluded.

"It is very complex engineering, a test of a country's power. Not everyone can turn a small reef into an offshore airport like China."

China Daily also reported on the surfacing of the images, and entitled the story "Typhoon Blows Away Illegal Island Made by Vietnam in South China Sea."

"Typhoons are rarely seen in the region during December. It seems this Jasmine one at the end of 2015 was less than expected for Vietnam. Satellite photos taken on April 4, 2015, show that Vietnam had begun illegal construction to build a manmade island on China's Nanhua Reef," China Daily wrote.

After the reports surfaced on February 2 Chinese Foreign Ministry Spokesperson Lu Kang was asked about the government's response to Vietnam's attempts at constructing the two islands in part of the South China Sea that is claimed by China.

"We have reiterated on many occasions our position on the issue of the South China Sea," Lu Kang said.

"We have indisputable sovereignty over islands in the South China Sea and their adjacent waters. This position remains unchanged. We maintain that disputes with neighboring countries over the Nansha Islands should be resolved through bilateral and friendly consultations."

China, and also Taiwan, claim that all of the Spratly Islands and the nearby Paracel archipegalo are located within its territorial waters in the South China Sea. However, Vietnam also claims ownership of the islands, and that it has ruled over them at least since the 17th century.

The Philippines and Malaysia also claim that some of the Spratly Islands are located within their territorial waters, and Brunei claims some territory in the South China Sea.

In recent years, Vietnam, along with the PRC, has been actively working to strengthen and expand the islands under the control of Hanoi in the Spratly Archipelago.

At the Vietnamese outpost DK 1, a second platform was built. 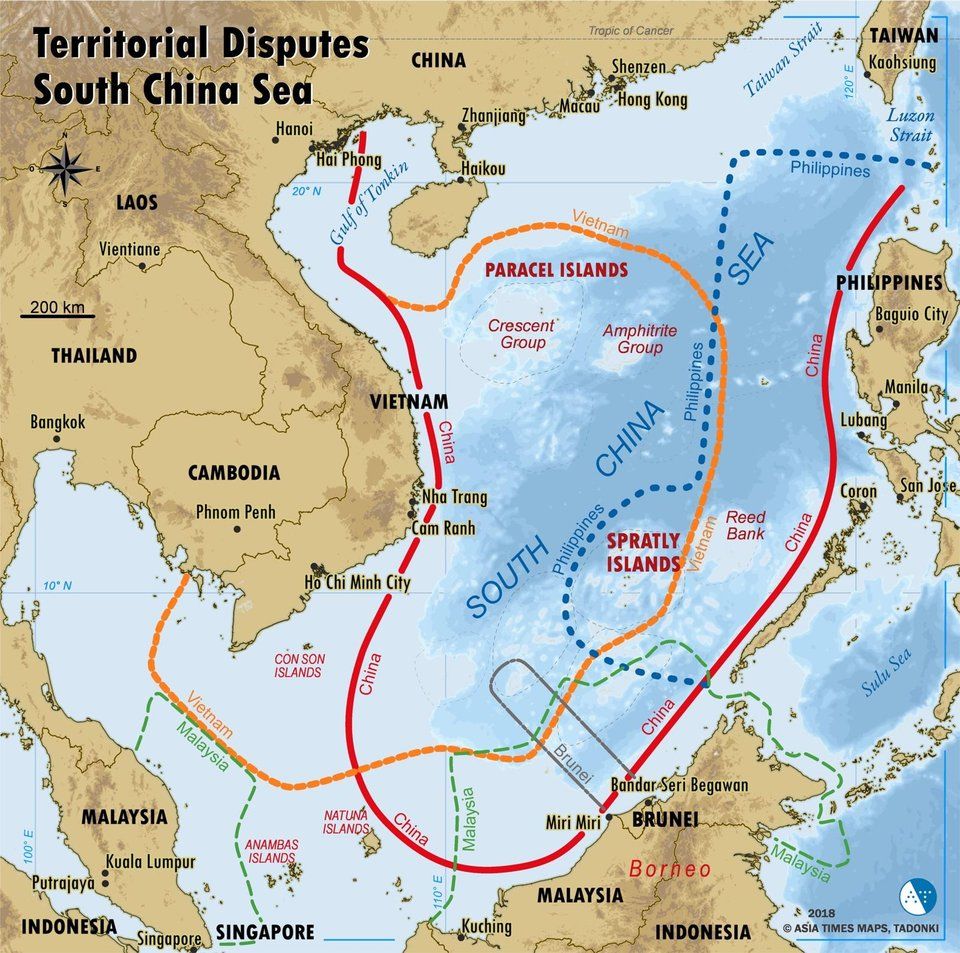 They are crazy those chinese.
higurashihougi

Isos wrote:They are crazy those chinese.

I used to be something different in the past but now looking back... at the moment my belief is that the majority of Chinese are pacifist. China is the largest manufacturer and goods trader in the world therefore they have many reasons to dislike a war. A war will negatively affect China's sales.

And who is the allies of hawkish faction in China ? US government of course. In the 1974 event, the Saigon regime was superior in naval power, but they lost in a pathetic way. Guess who ordered the Saigon regime to intentionally lost ?

My opinion is that in the war of 1979 we not only fought against the hawkish in China, but also against the US imperialist.

How India could tweak China in the South China Sea

The frigate Quang Trung of the "Cheetah-3.9" project of the Vietnamese Navy on patrol in the Spratly archipelago 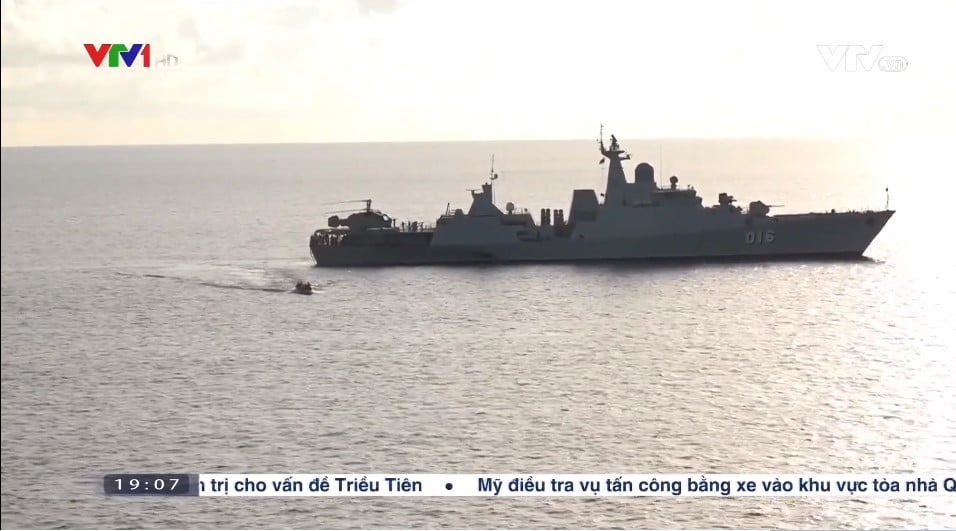 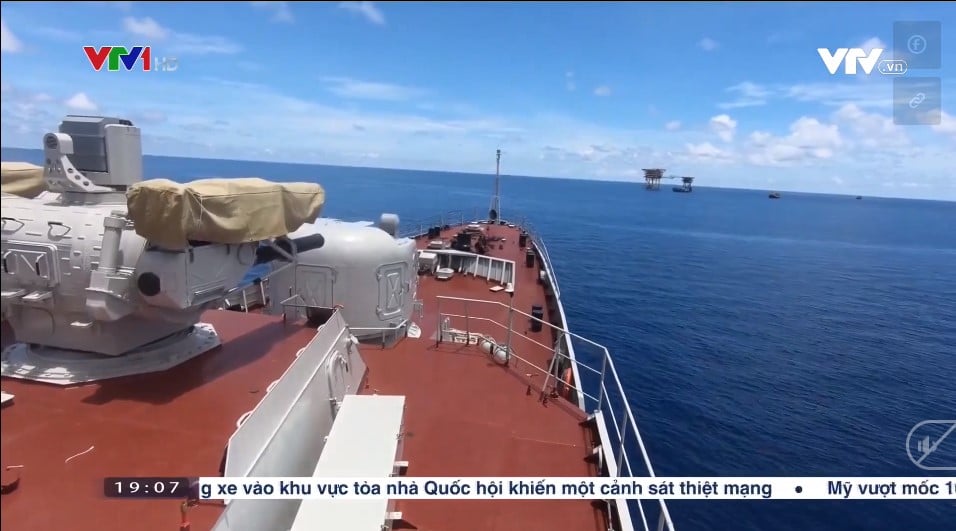 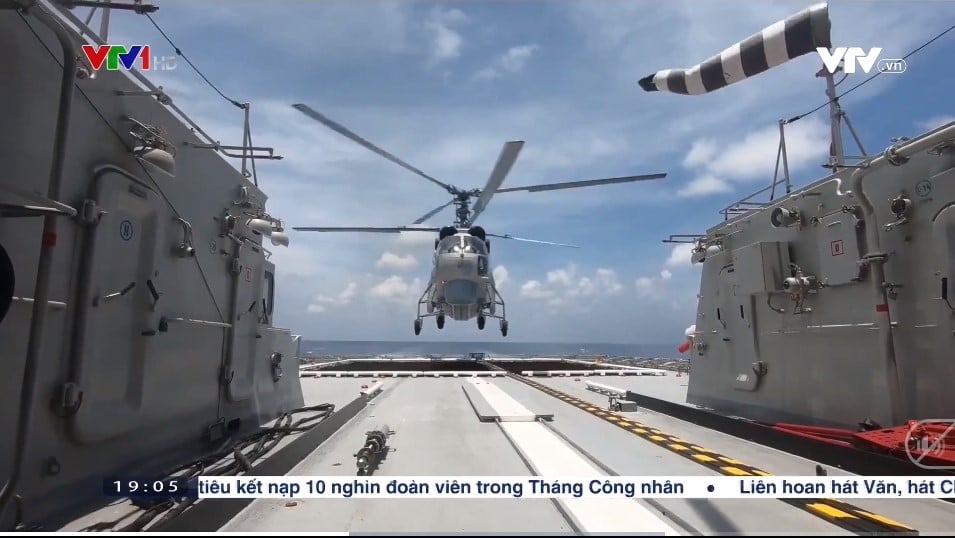