GarryB wrote:Yes, but I suspect radar blockers would be more likely.

With modern jet engines the blades are not separate items fitted to a hub, they are often part of a disk which makes them rather stronger and better able to resist the impacts of foreign objects.

I am really interested in finding out how common are bird strikes with fighter aircraft then.
GarryB

Most airfields... civilian and military have some sort of anti bird mechanisms in place... in Soviet times it was common to see scarecrows on soviet airfields, and various noise makers to the use of hawks and other birds of prey to scare away birds are used.

The critical period is takeoff and landing where losing an engine can be critical.

At the Farnborough airshow a MiG-29 was brought down by bird ingestion, but the fact that the aircraft was flying low and slow at a high angle of attack was the main reason the aircraft was lost... in normal level flight there would have been no problem as the MiG can fly safely on one engine.

According to the debrief with the pilot the aircraft was flying at an angle and a speed that required two engines to maintain flight... it was steeply pitched up and was relying on engine power to keep it airborne. When one engine shutdown the aircraft banked over towards the ground... the pilot reportedly managed to restart the failed engine but it was too late to save the aircraft. In level flight at normal flight speed well above stall speed there would not have been any problems the aircraft could have maintained speed and altitude on one engine and the other engine could have been restarted safely.

Obviously for a single engine fighter it would be more of an issue.

the doors on the MiG-29 air intakes and the Yak-130 are designed to stop stones and dirt entering the intake on rough runways and open when the front tire lifts off the ground so would not work against a bird strike in low level flight.
Guest

Does anybody have any information about the procurement plan of the VVS?
George1

Ivan the Colorado wrote:Does anybody have any information about the procurement plan of the VVS?

Ivan the Colorado wrote:Does anybody have any information about the procurement plan of the VVS?

Mid Air Ammunition Loading: Can a mechanism be developed to reload fighter aircraft with ammunition during mid-flight ?

I was thinking on the lines of mid air refueling. Can this be done with ammunition as well? Say I want to reload a Su 30 mid air with ammo, what are the challenges that I will face? And can these challenges be overcome?
Werewolf

The racks, launching racks and fix points on aircrafts are not automatic but all manual, meaning workers and mechanics have to bring bombs, missiles equipment in position and then have to connect wiring, tighten the screws and connect safety pins from bombs to fixing hardpoint to assure that bombs are working properly and when used and dropped from their pylons that the safety pin gets pulled out.

If you want to make it all mid-air automated you would need many more devices, equipment on the aircrafts itself, many more cameras to observe Fighter and Reloading tanker, so they do not collide mid air. You would need an extracting mechanism from reloading aircraft and this aircraft would be overexpensive, highly dangerous maneuver and procedure and by the end you would end with higher costs then just using an Aircraft carrier that is used as a mobile airfield and ammunition depot.

If you really want something like that, yes i would say it would be possible, but unlikely to work like intended and have zero advantages, because such an aircrafts weights alot and needs protection from fighters, which slows down fighters and exposes them to the enemy and only attracts enemy fighters due the immense RCS, just not feasiable.
zackyx

Is the plane firing the rockets a Su-25 ? if yes what kind of targetting pod is it using ?
GarryB

Is the plane firing the rockets a Su-25 ? if yes what kind of targetting pod is it using ?

I would say yes... and from the view it appears to be a belly mounted pod rather than anything mounted in the nose of the aircraft.

Does RuAF has Targetting and Navigation Pod comparable to Israel Lightening Pod ?

I read Israel is coming with newer pod called Lightning 5


Litening 5 employs a new sensor pack, utilizing an optical assembly and larger aperture tailored specifically for the new sensors, enabling the increased identification and recognition distance. The pod uses two FLIRS – a Mid-Wave Infra-Red (IR) and Short Wave IR (SWIR). The later extends observation range using active laser illumination. Complementing the sensor pack is a color CCD HD-TV, improving target recognition and separation of man-made objects that are often harder to spot in the thermal, monochromatic image. Color improves the ability to share a common understanding with ground forces and recognize specific vehicles based on their color. Images can be fused or displayed separately, based on the level of avionics used in the aircraft.

Rafael’s “image-based common targeting language,” also known as Matchguide, is integrated in the new pod. This allows rapid target handoff between the targeting pod or ground-based forward air controller and guided weapons carried on board. Matchguide is fully integrated in the Litening 5, enabling the pilot or ground controller to designate a target simply by touching its image on a display to deliver the targeting as coordinates or a scene to the attacking weapon. This method dramatically shortens the “sensor to shooter cycle.”

Does RuAF has Targetting and Navigation Pod comparable to Israel Lightening Pod ?

With source code you can see how the software runs... what sort of inputs each part needs and the sort of data each module requires to function.

with a programme that is compiled you have to manually change the inputs to see what happens and with millions of potential inputs it could take years to tests parameters.

Modern aviation systems are like late model windows in that the operation system controls the hardware while sensors and weapons and addons are allowed access to hardware through the operating systems.

With windows 95 your system could crash all the time if a programme you installed takes too much memory, or does not release memory and runs out or a range of other problems.

New things added are generally plug and play and as long as you install their drivers properly should function properly.

With the source code to the OS you can write your own drivers and add any hardware you like or even new software modules to enhance performance.

The Su-24M is a good example where Gefest & T software added a capability to accurately bomb targets in free flight with a continuously computer bomb aiming system that showed a moving aim point that indicated where a particular bomb would land on the ground if released in real time.

And Austin... of course the Russians are working on targeting pods... the current model for the PAK FA is one and there are others like the one of the MiG-35, and likely the Su-35 will have one too.
User2245

have u introduce yourself??

there was this article from the nationalInterest which argues that despite advances in Russian plane manufacturing, the Russian AF still lacks precision strike weapons like those from US/NATO air forces, I know its from a biased publisher, but what comparable weapon systems can Russia offer to counter MBDA Storm Shadow and the Raytheon AGM-154 Joint Stand-Off Weapon?

Project Canada wrote:there was this article from the nationalInterest which argues that despite advances in Russian plane manufacturing, the Russian AF still lacks precision strike weapons like those from US/NATO air forces, I know its from a biased publisher, but what comparable weapon systems can Russia offer to counter MBDA Storm Shadow and the Raytheon AGM-154 Joint Stand-Off Weapon?

Your statement is strange. To counter? Well, to counter it would be Pantsir SM systems would be used to strike the cruise missiles before they hit their intended targets. If you mean for missiles that are similar to it? Well, Russia has a whole wide range of cruise missiles and guided munitions.

People always says the same, but never provides actual data. Easy said then, right? I mean, why would Russia whom don't speak English nationally, would read the article and look to counter it? Simply put, look up all the Kh type missiles? What about KAB missiles? So many types.
George1 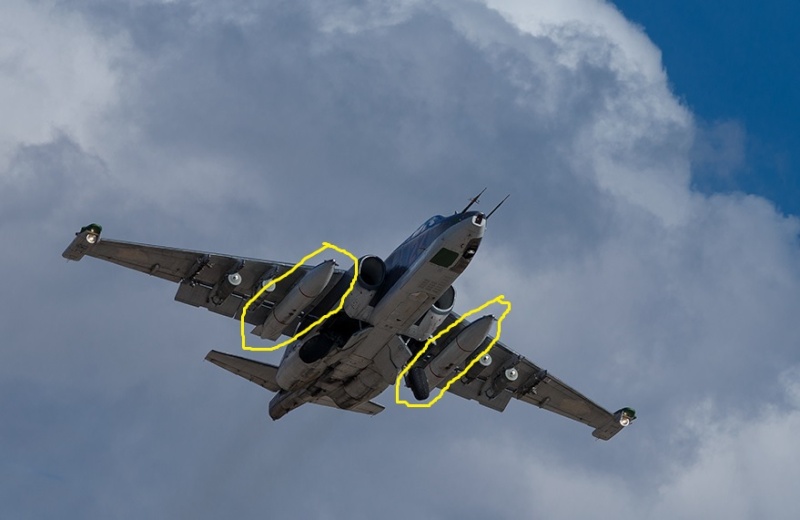 Can anyone recognize the type of missile/bomb in yellow lines?
NationalRus

Can anyone recognize the type of missile/bomb in yellow lines?

Note the fins at the nose of the tanks...

On fuel tanks they are designed to make the nose of the tank drop down so it separates from the aircraft when they are released without moving up and damaging the aircraft or other ordinance when released.

The KGMU munitions carriers didn't have that because they are not released in combat... they stay on the wing and are returned to base to be reloaded.
Werewolf

That is what a KGMU-2 container looks like. (LockOn Flamming Cliffs) simulator. 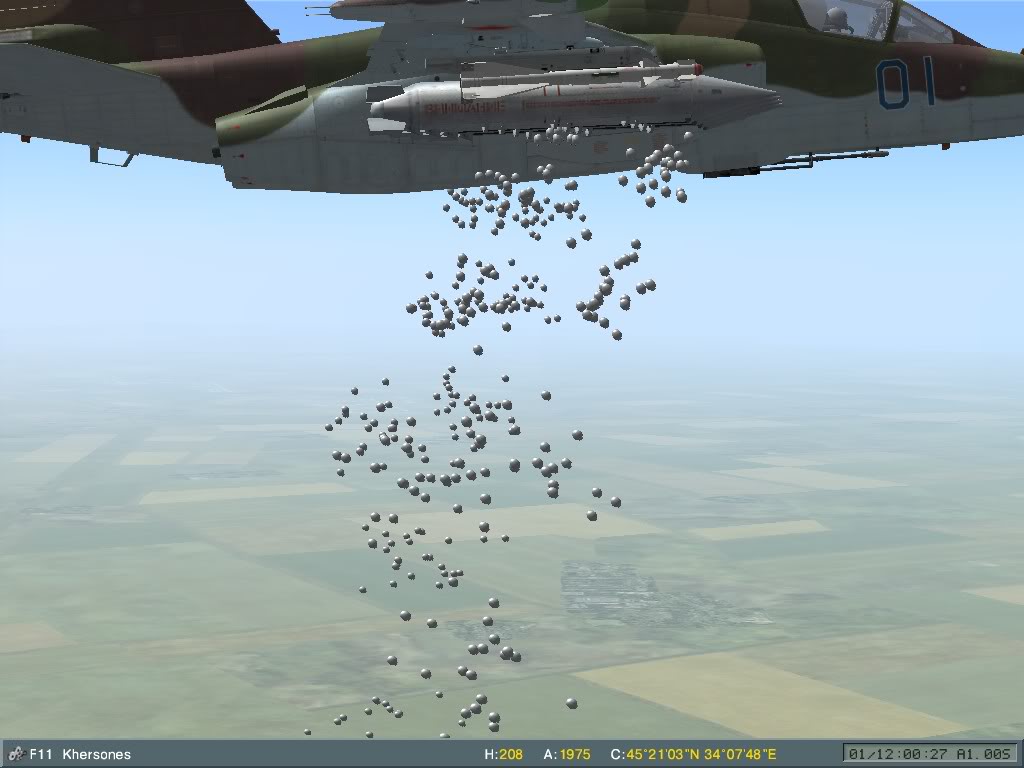 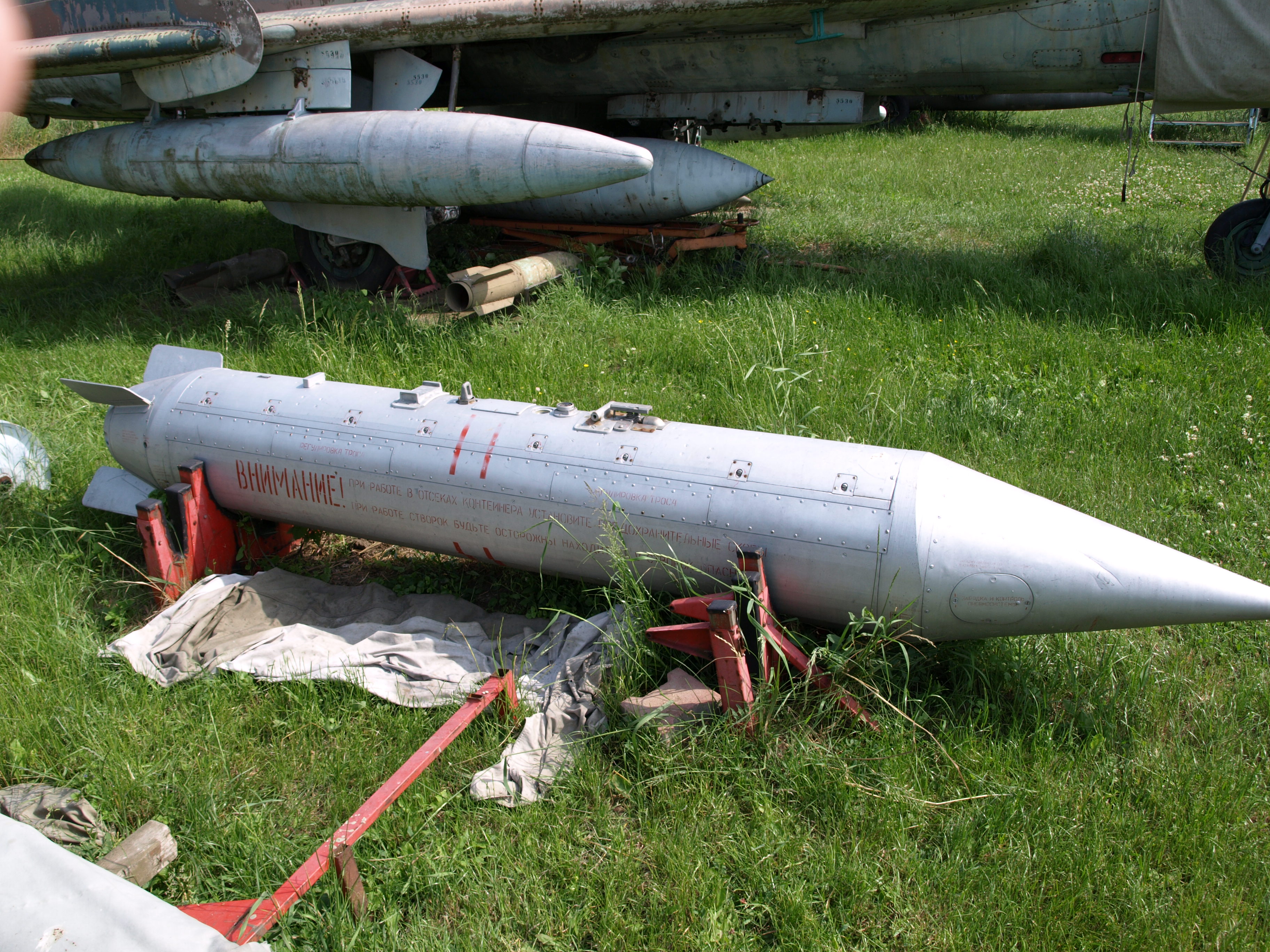 yeah looks like it is a fuel tank, КМГУ was my first guess since the bottom side looks like it has a hatch in the middle and maybe they test a new version
GarryB

That is definitely a fuel tank... note in the post above of the KGMU unit the aircraft in the background also has a fuel tank under its wing, but it looks like it is an Su-17 or 22, and does not have the front fins the one on the Su-25 has because the Fitter is a supersonic aircraft and those fins cause a lot of drag...
headshot69

What kind of system sensor is in red circle? THX

Can anyone identify these aerial bombs?

This is a picture from Syria, 2012.
It shows a VBIED packed with at least 8 aerial bombs, I guess they are soviet-made (FAB).

Can someone experienced ideintify them, at tell the right type? Or at least the explosive amount they contain?

Thank you in advance. 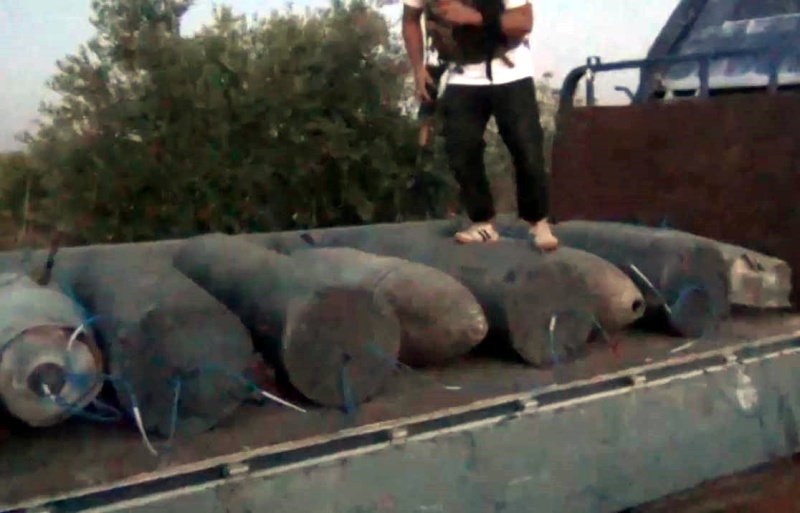 From left to right the first has the distinct shape of a FAB-250 in the old high drag version(model 1954) as opposed to the later streamlined 1962 models.

The next two however look to me to be 203mm shell casings for artillery pieces with the fourth and sixth items being the projectiles for the same weapon...