Not really. Snipers? Insurgents could just hide behind sand bags. Manually launched mortars wouldn't be as accurate, wouldn't have has much ammo readily available, wouldn't have anywhere near as many submunitions, would require more manpower who would be exposed, would take much longer to fire off just as many projectiles (within the same time span of launching one rocket), and the purpose is to impede movement by laying anti-personnel mines, and not to detonate on impact. Why would you need additional impact drones, when the rockets would have more fire power within them, and Russian MLRS has rockets with observeration drones built in to them.

If insurgents are encamped behind sandbags then they are already trapped. if you want to eliminate them, the sniper can call for a mortar or air strike. The MLRS has its purpose but the collateral damage in urban environments is very high and you have to sweep the mines when you go in to take the area. Too me mines are an emergency tool. When you are at risk of being overrrun by superior numbers, then use mines.
thegopnik

mnztr wrote:You do need longer range today. With drones, it is not likely the launcher can position itself to attack. Also with drones the launcher crew can send a drone for targeting. I wonder if a small wing can be added that pops out at the apogee to extend rangeI bet this will add at least 10 KM to the range. Perhaps only use those for long range missions. With drones and longer range, precision becomes much more valuable. If you look at how US MLRS has evolved, with just 3 vehicles you can now provide precision strike in a radius of almost 1000 KM which is a staggering capability. By extension the Tornados newest missiles allow the same to over 2000KM which is quite mind blowing. The shorter range missiles are probably a bit more practical however as the 1000K missiles cannot be very cheap and thus cannot really replace artillary. *edit* I did read the longest range Grad is about 120 km today with precision. This is very useful. Extra range would be "nice to have"  but maybe not worth the $$

What sources are you getting those 1000 km ranges for MLRS?
mnztr

I edited my post Grad is I think 120KM while the US is up to 300. I think 120 is pretty much all you need in most cases for this type of projectile, but range is always useful
GarryB

The problem is that when using the 300km range missiles MLRS is effectively just a shorter ranged Iskander with a missile that is slower and easier to shoot down.

Overall the MLRS is a bad idea for HATO.

It is standardised on the Bradley infantry fighting vehicle which pretty much only the US uses, it carries 12 launch tubes of 227mm rockets which for most of its career had a range of about 35km.

In comparison the Uragan is a 220mm rocket with 40km range and 16 launch tubes per vehicle... which is a standard truck mount with much better road mobility and a fraction of the price to buy, to maintain, and to operate...

The Smerch is a 300mm rocket with a 90km range and 12 launch tubes also with a standard truck mount and better road mobility and a fraction of the price to buy and maintain and operate with much more powerful payloads too.

Both the Uragan and Smerch rockets have an autogyro that ensures the rockets arrive in closer groups to concentrate their effect and fire power on target... a cheap and simple way of reducing error and improving performance without making the rockets really expensive.

Honestly with 180km range 152mm guided shells being developed I rather suspect they will become more useful than rocket artillery which is a good way to shower an area target in fragments, but will never be ideal for hitting point targets without making it much more expensive by making the rockets guided.

I would suspect the 180km range shells have a greatly reduced HE payload... perhaps 5-10kg which is still plenty for destroying a vehicle or MG position...
miketheterrible

mnztr wrote:I edited my post Grad is I think 120KM while the US is up to 300. I think 120 is pretty much all you need in most cases for this type of projectile, but range is always useful

Not for an MLRS it isn't. That's about what the two rocket systems is
Hole 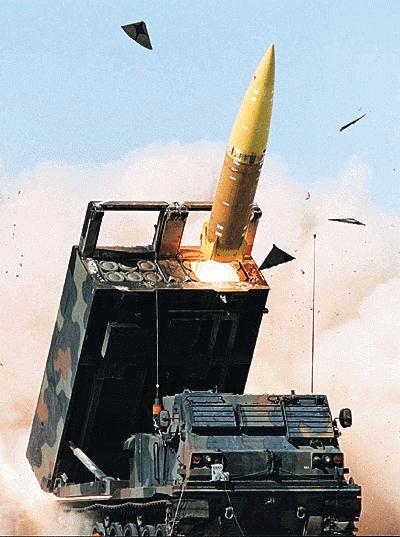 Effectively a much more expensive, shorter ranged, less accurate, better mobility through mud but much poorer mobility on roads equivalent of the Iskander.
GarryB

In comparison the logistics for the rocket batteries are quite complex because of the numbers of different types of rockets they have available and need to supply for specific targets and specific roles.

With the capacity of the rockets and their payloads and accuracy levels means a grad might not have 40 rockets of the same type... they might go for 30 rockets with HE and anti armour submunitions, and the remaining ten rockets with sensor fused submunitions on each vehicle so a battery of 6 vehicles could launch 60 rockets at an armoured formation at its rear staging area forming up for an attack, while the other 180 rockets could be directed at infantry or HQ or artillery support units to further blunt the attack...
George1

In the Kaliningrad region "Smerch" MRLS were deployed

In its turn, the Izvestia newspaper published material on this subject by Bogdan Stepovoy, Roman Kretsul and Anton Lavrov under the heading “To hit in one gulp: new reactive systems appeared in Kaliningrad. Artillerymen of the Baltic Fleet coastal forces received the Smerch MLRS division, which, in particular, states:


The artillery brigade deployed in Kaliningrad includes the Smerch division of ultra-long-range multiple launch rocket systems (MLRS). These guns can with particular accuracy hit the positions of medium-range missiles, as well as enemy defenses. Experts note that NATO's air defense has no way to intercept the "Smerch". Thus, the MLRS became a symmetrical response to the building up of the alliance's power in the Baltic states and Eastern Europe.

Firing range of up to 120 km and the power of "Smerch" ammunition will reliably cover the Kaliningrad region.

The artillery brigade, which received new equipment, is part of the 11th Army Corps of the Baltic Fleet coastal forces, created in 2016. Now it is being actively strengthened. Last year, 152-mm self-propelled artillery mounts (self-propelled guns) Msta-S entered service with the units. Replacing Grad with new MLRS will increase the brigade’s fire capabilities several times.
For comparison: a firing of one Smerch combat vehicle strikes an area of ​​67 hectares at a range of 20 to 120 km. Grad covers an area of ​​4 hectares at a distance of up to 20 km, and with modernized missiles - up to 40 km.
dino00

"By the end of the year, delivery of more than 30 modern multiple launch rocket systems has been planned to the missile and artillery units of the Armed Forces of the Russian Federation . As part of the state defense order, manufacturers will transfer to the Russian Ministry of Defense Tornado-G and Tornado-S MLRS," in the message.

The Russian Armed Forces will get more than 30 new Tornado family multiple launch rocket systems (MLRS) in 2020, the Defense Ministry said on Sunday.

“The delivery of more than thirty modern multiple launch rocket systems to units of rocket troops and artillery of the Russian Federation Armed Forces is planned by the end of this year. Tornado-G and Tornado-S MLRS will be handed over by manufacturing companies to the Russian Defense Ministry within the framework of performing the state defense order,” the Ministry said.

The MRLS on the pic is an Uragan-1M. The Tornado-S looks like the Smerch.
George1

Just quoting the article. Got it wrong.

What I don't understand is that with the new pallet system... why do they need a separate Uragan-M and Smerch-M system?

Therefore I can understand the journalists getting it wrong... I don't understand it and I am interested in the subject...
TheArmenian

I think that the photo is the Smerch system with 2x6 pallets.
GarryB

That is exactly what I was thinking, but if that truck can carry the 300mm rocket pallets then it should be able to carry the 220mm and 122mm pallets for the Uragan and Grad rockets too... so I can understand them having a small light Grad variant because it will be cheaper and smaller and lighter than this big expensive truck, but for most roles where there are decent roads and not too steep roads or sharp turns why would you need more than a small light truck and this one?

It is all very confusing... especially when you mix in original vehicles given an upgrade too...
franco

GarryB wrote:That is exactly what I was thinking, but if that truck can carry the 300mm rocket pallets then it should be able to carry the 220mm and 122mm pallets for the Uragan and Grad rockets too... so I can understand them having a small light Grad variant because it will be cheaper and smaller and lighter than this big expensive truck, but for most roles where there are decent roads and not too steep roads or sharp turns why would you need more than a small light truck and this one?

My understanding is that Tornado-G replaces the Grad system in brigade / division direct artillery support.
The Tornado-S replaces the Smerch / Uragan in the 4 District Artillery Rocket brigades.
The Uragan-M replaces the Uragan / Grad in the Armies / Corps Artillery brigades. This system can fire all 3 artillery rocket types as needed, in their support of the Army or Corps that they are attached to for support.
Hole

A few pics, with a lot of love going to Said. 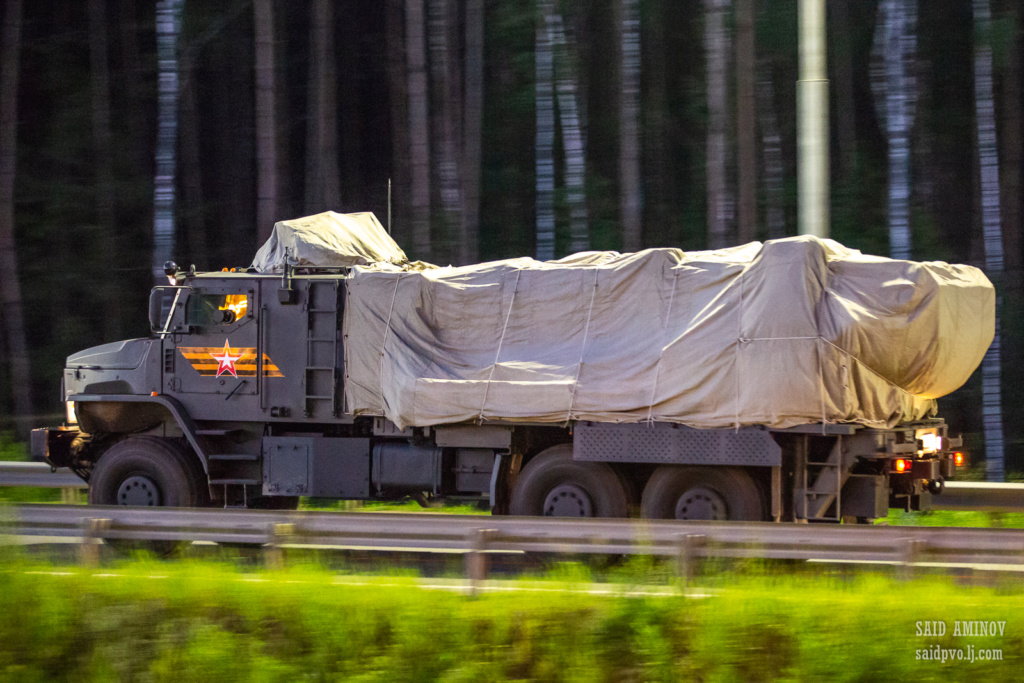 In the Victory Parade on Red Square in Moscow on June 24, 2020, among other things, the machines of the new ISDM remote engineering mining system designed for the engineering forces of the Ground Forces of the Russian Federation will be demonstrated for the first time. ISDM combat vehicle and transport-loading vehicles take part in the parade rehearsals.

The fighting vehicle of the ISDM remote-mining engineering system is moving to Moscow to participate in the Victory Parade on Red Square, 06/13/2020 (c) Said Aminov / saidpvo.livejournal.com


The creation of an ISDM remote mining system for mining was carried out by JSC NPO Splav (Tula) under the OKR Agriculture-I under a state contract with the Ministry of Defense of Russia No. N / 3/4 / 74-2014-DGOZ concluded on December 30, 2013, however, as can be judged, it was significantly delayed. Information materials on ISDM were presented for the first time at the Army-2016 international military-technical forum, however, samples of IDSM machines were “lit up” only now, and there is still no data on the system’s entry into mass production.

According to well-known data, the ISDM combat vehicle is a 50-barrel multiple launch rocket system made on the KamAZ chassis (8x8) and firing with specially designed 122-mm rockets equipped with mines of various types, the preparation of data for firing is automated. Missiles are in transport-launch containers, for reloading the system includes a transport-loading machine also on the KamAZ chassis (8x8). Both types of vehicles are equipped with armored cabs.

The transport and loading vehicle of the ISDM remote mining engineering system moves to Moscow to participate in the Victory Parade on Red Square, 06/13/2020 (c) Said Aminov / saidpvo.livejournal.com 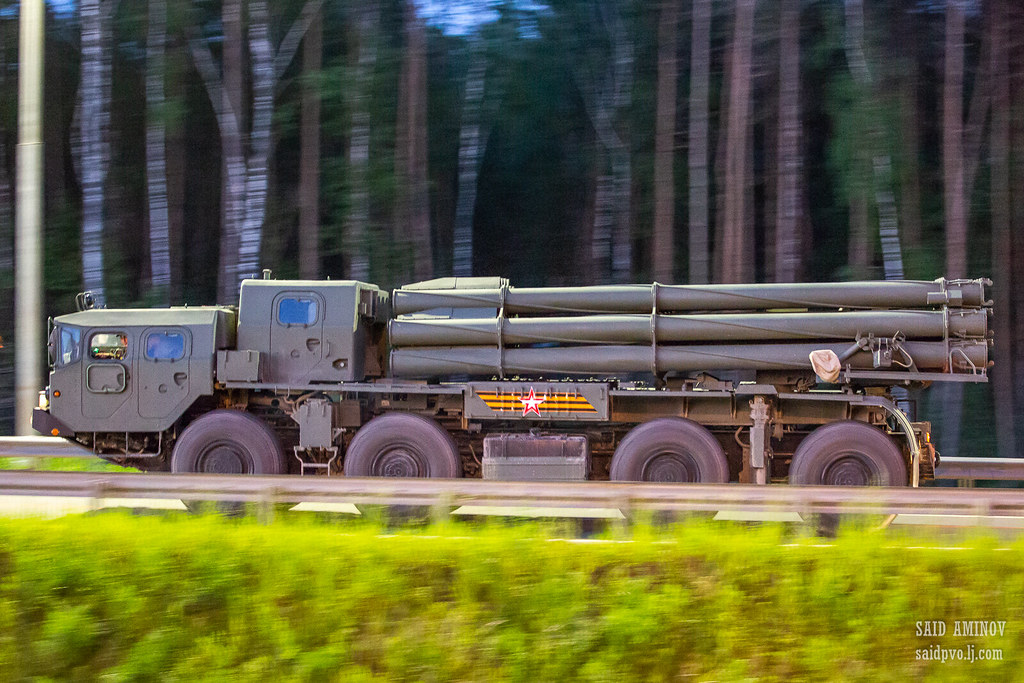 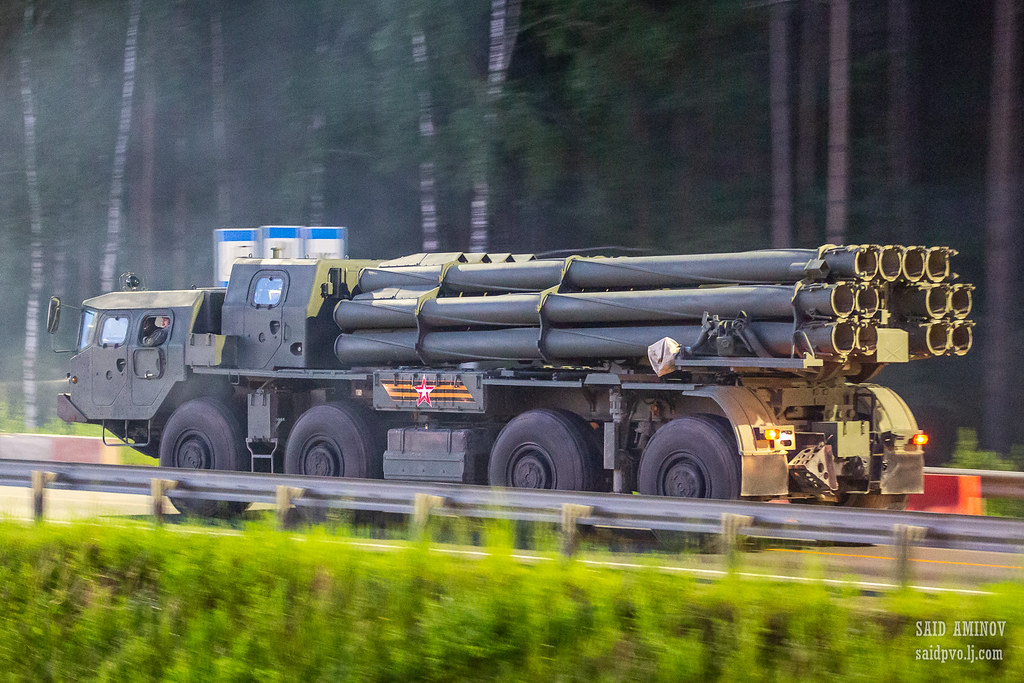 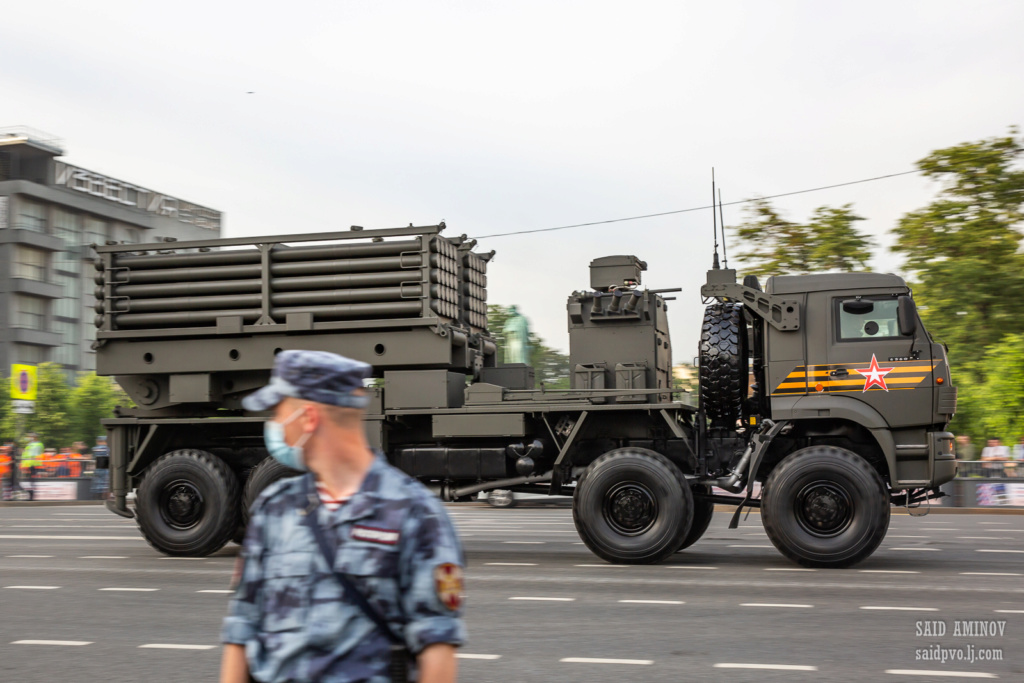 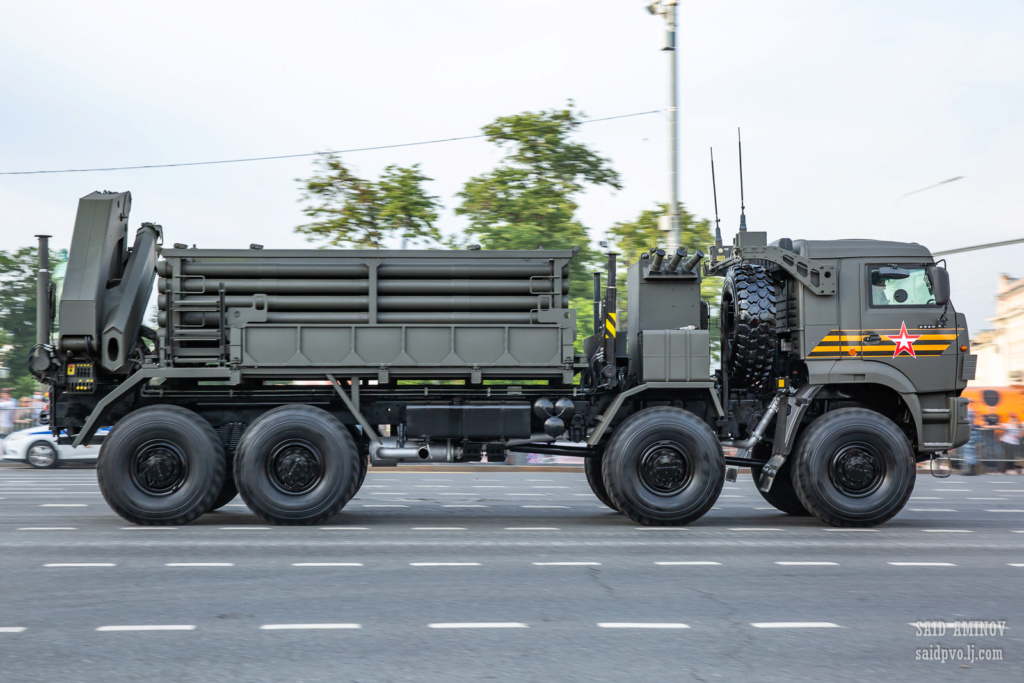 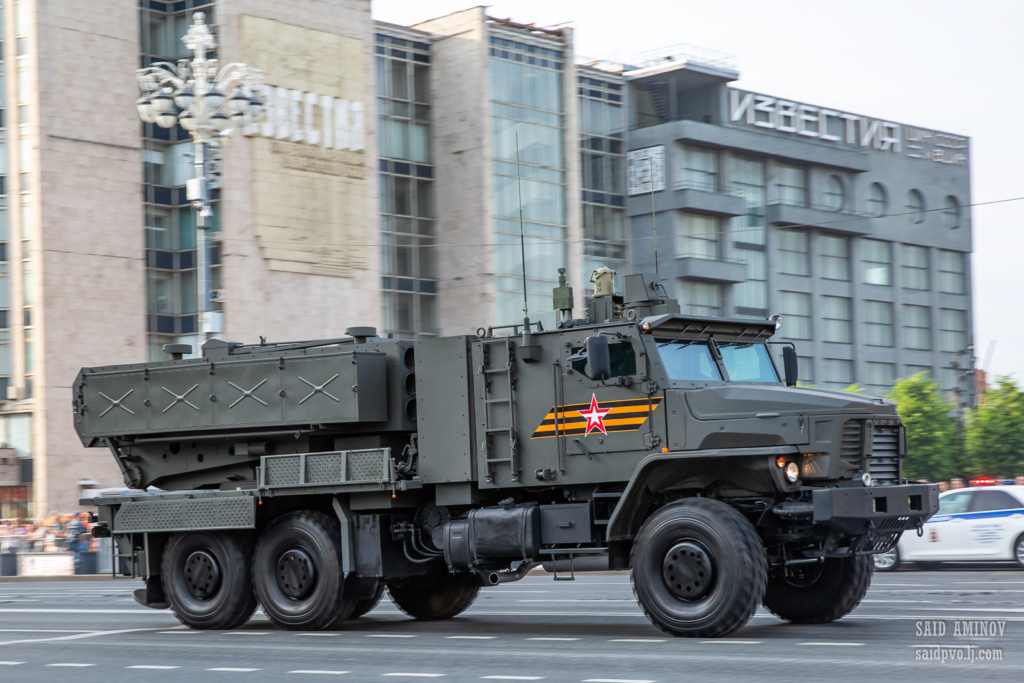 Reload vehicle for tornado, no ?

Interesting it has smock grenades...
Hole

First pic is the ISDM mine-laying system.
Second pic is the transloader for the ISDM.
Third pic is the TOS-2.
Sponsored content