So if the Shipyard are so busy that they cannot built 8 Borei and 7 Yasen , how will they upgrade the Akulas and Oscar 2 do they have enough space to carry all the works ?
TR1

Austin wrote:So if the Shipyard are so busy that they cannot built 8 Borei and 7 Yasen , how will they upgrade the Akulas and Oscar 2 do they have enough space to carry all the works ?

The legacy boats are being upgraded @ Zvezdochka; so far Sevmash is the only shipyard involved with the new nuclear boats.

Does West Actually have the money these days with all those debt ?

Well they could either lower taxes for the rich or print more money... they can't afford new wars yet seem happy to create them from nothing. 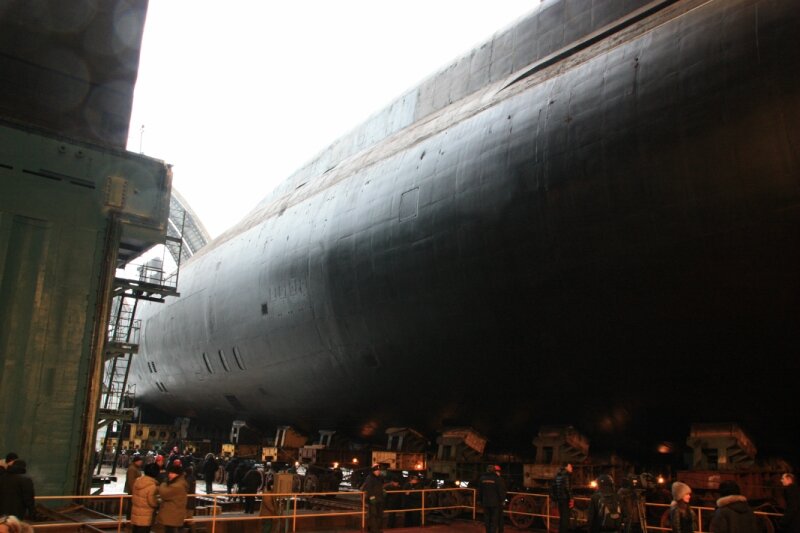 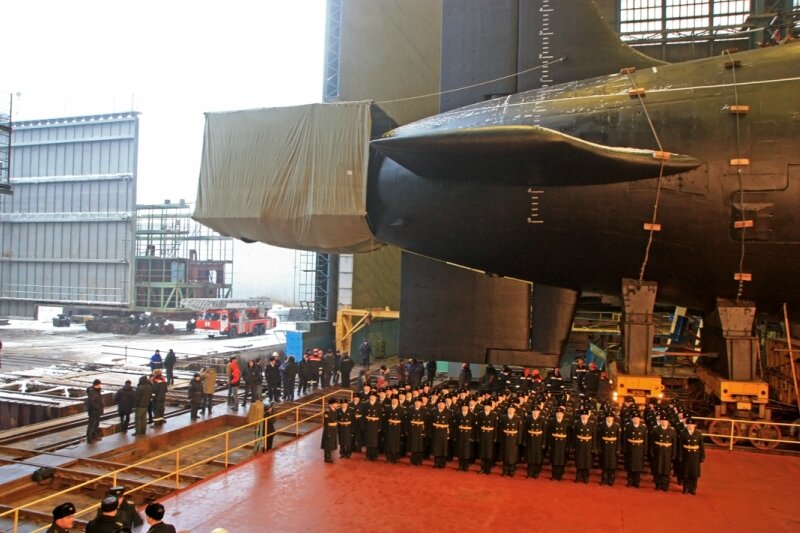 The construction of the Alexander Suvorov, the fifth in the series and second of the improved Project 955A (Borey-A) class, will begin on July 28, when Russia celebrates Navy Day, while the sixth submarine, the Mikhail Kutuzov, will be laid down in November.

The metal cutting works for the hulls of these vessels have been carried out since 2011, the paper said.

Russia’s first Borey class submarine, the Yury Dolgoruky, officially entered service with the Russian Navy on January 10. It has been assigned to the 31st submarine division of the Northern Fleet.

The second vessel of the Borey class, the

Alexander Nevsky, is undergoing sea trials while the third, the Vladimir Monomakh, was floated out on
December 30.

The first submarine of the improved Borey-A class, the Knyaz Vladimir, was laid down in July 2012.

Russia is planning to have three Borey class and five Borey-A class submarines by 2020.

The improved vessels will be equipped with advanced sonar, navigation, communications and fire-control systems and will be more “stealthy,” Rossiiskaya Gazeta said.
Austin

Video of Yury Dolgoruky launching Bulava , The maximum range the SLBM flew during its test is 9,300 Km

Nice, but too bad we don't see the actual take off of both missiles

Yes, could be anything firing those birds. But its a mighty and terrifying sight.

If they want 8 boats by 2020 I don't understand the logic of wanting 20 launch tubes per sub.

Perhaps they will only load 3 warheads into each missile and use the rest of the capacity for penaids, or perhaps they are anticipating a US missile defence system that requires more than 1,500 warheads being deployed?

With three warheads per missile that makes 444 warheads, and with 1,250 divided by three equalling about 417 that might work out about right.
Austin

Most likely the Bulava SLBM will come with 3 warhead each and the 6 warheard configuration is the upload potential reserved for situation where Russia withdraws from NEW START treaty due to any future dispute with US on ABM deployments.

Liner was tested with 10 Warhead configuration for the same reason , it can carry large and small warhead in configuration of 10 , which is the upload potential for Liner though in reality they would carry 4 warhead each.

Not a signal... a precaution.

They have the capacity to greatly increase warhead numbers fairly quickly and cheaply without the cost of having to add more platforms...

MOSCOW, January 18 (RIA Novosti) - Russian submarine-builder Sevmash has begun moored tests of the third Borey-class (Project 955) ballistic missile submarine Vladimir Monomakh, the shipyard said on Friday.
"The fourth-generation missile submarine Vladimir Monomakh has been submerged in the water and started moored tests," Sevmash said.
Shipyard sea trials will start in the summer of this year, Sevmash said.
Vladimir Monomakh will be the third and last Project 955 boat, armed with 16 Bulava ballistic missiles. The fourth and subsequent boats will be Project 955A vessels with 20 missiles. The fourth boat, Knyaz Vladimir, is under construction.
Vladimir Monomakh has also been built with the incorporation of the latest acoustic signature reduction techniques, Sevmash said.
The Russian Navy accepted into service the first boat of the class, Yury Dolgoruky, on January 10. The second in the class, Alexander Nevsky, is currently undertaking sea trials and is due to enter service this year.

The navy plans to operate eight Borey class submarines, with construction ending in 2020.

So it seems the construction is picking up pace and gets the boats ready. It is clear that this project is very important for the Federation, and its nice its succesful, its by no means easy to build and maintain a fleet of SSBN´s with missiles. Few countrys have that capability, as its technological and engineering and sience must be in top. Also its very expensive.

A few questions remains though, about Bulava, is it in service and is all the glitches eliminated?

runaway wrote:A few questions remains though, about Bulava, is it in service and is all the glitches eliminated?

Going by public announcements the Bulava officially entered service about the same time as the YD sub.

Also 3rd Yassen will be laid this year.

The Vladimir Monomakh was floated out last December and is due to enter service in 2014.

The first Project 955 Borey-class submarine, the Yury Dolgoruky, was commissioned into the Northern Fleet in January, and the second, the Alexander Nevsky, will be handed over to the Russian Navy by the end of the year, a Navy official told RIA Novosti last Friday.

The Alexander Nevsky has been undergoing trials at the Sevmash shipyard since 2012. There will be three sea trials this year and a Bulava ballistic missile will be test-launched from the submarine in the summer, the official said.

The first three vessels in the Borey series are capable of carrying 16 Bulava submarine-launched ballistic missiles.
A total of eight Borey-class submarines are to be built for the Russian Navy by 2020.

Sevmash will start construction this year of two upgraded Borey class Project 955A submarines - the Alexander Suvorov and the Mikhail Kutuzov - capable of carrying 20 ballistic missiles each.

Thanks Austin.
Would appreciate if you could also post the rest of the magazine.
Austin

Dont have the rest of magazine , I just found this pdf and posted it
TR1 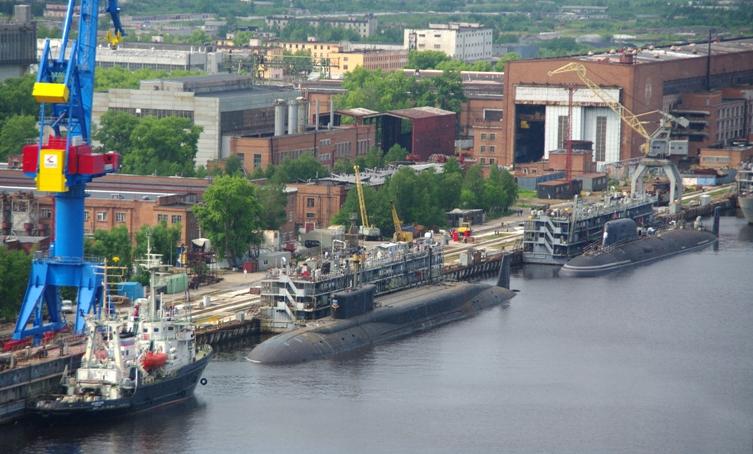 Dolgoruki and Severdovinsk. Just by crude visual analysis, compared to a SSBN the 885 is a BIG boat. 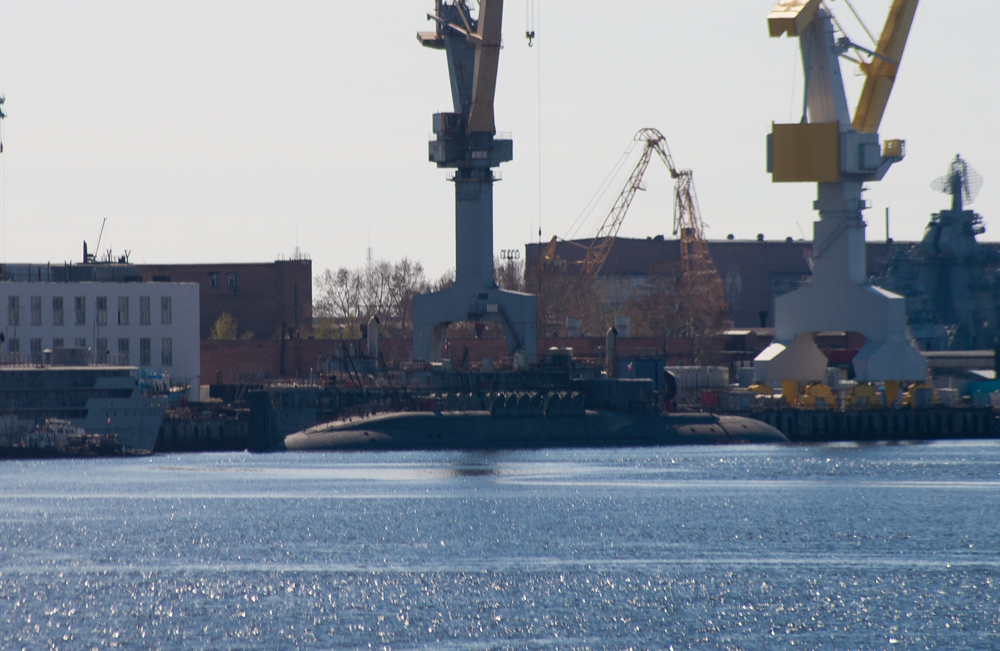 Some glimise of Borei C&C , Shiny new LCD and Gizmos And a big pic:

The Vladimir Monomakh, a Project 955 Borey-class submarine, spent 25 days at sea, testing all of its systems and equipment, the Sevmash shipyard said in a statement. It added that the submarine would soon conduct a final series of sea trials to be completed by year-end.

Sevmash chief Mikhail Budnichenko said in July that the Vladimir Monomakh would join the navy in mid-December. But the submarine, to be armed with the Bulava submarine-launched ballistic missile (SLBM), had its trials put on hold earlier this month following an unsuccessful Bulava launch. Defense Minister Sergei Shoigu also ordered five additional launches of the troubled SLBM, a ministry spokesman said.

With the September 6 failure, eight of 19 or 20 test launches of the Bulava have been officially declared unsuccessful. However, some analysts suggest that in reality the number of failures is considerably higher. Despite several previous failures officially blamed on manufacturing faults, the Russian military has insisted that there is no alternative to the Bulava.

A total of eight Borey-class submarines are to be built for the Russian Navy by 2020. Russia’s fleet received its first such submarine, the Yury Dolgoruky, in January. Borey-class submarines are to become the mainstay of the navy's strategic nuclear deterrent, replacing the aging Project 941 (NATO: Typhoon-class) and Project 667 class (Delta-3 and Delta-4) boats.
Sponsored content