George1 wrote:Scheduled for 2018, American military aid to the Kurds 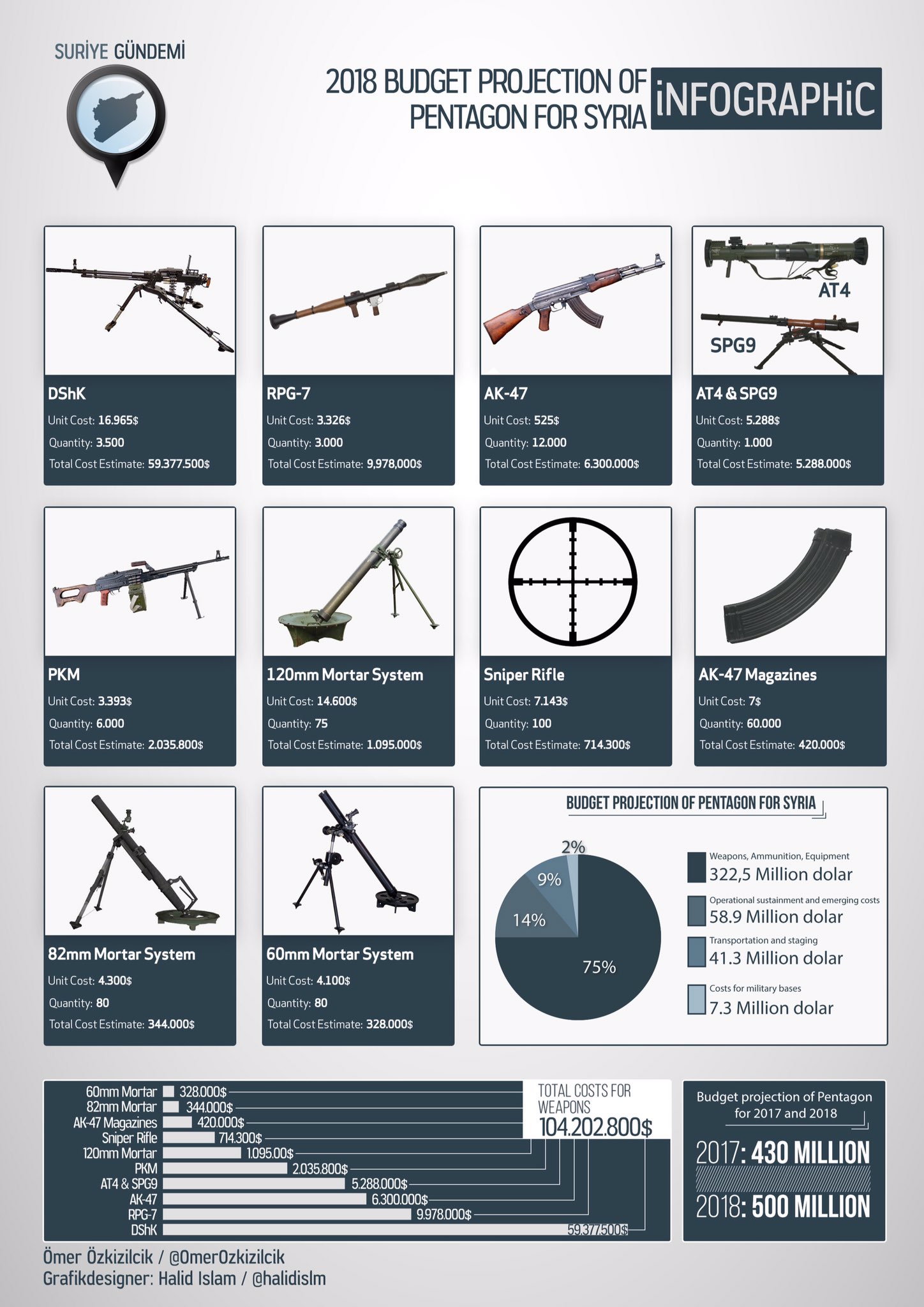 Scheduled for 2018? Our soldiers already found several AT4 Anti-tank weapons in Hakkari and Şırnak Province. These weapons probably come from Syria.

I read on Global Research that that the PKK assholes kidnap kids, to become child soldiers, fucking asshole bitches.

TEHRAN (Tasnim) – Turkish President Recep Tayyib Erdogan said Tehran and Ankara may launch a joint operation against the outlawed Kurdistan Workers' Party (PKK) and its offshoot PJAK in the near future.

“A joint operation with Iran against terror groups that are posing threat is always on the agenda,” Erdogan told reporters on Monday, the Daily Sabah reported.

He added, "We have discussed the details on what kind of work we can carry out amongst us. There are damages that the PKK and its branch in Iran causes. We will carry out these discussions with the understanding that the threats can be defeated with the cooperation of both countries in a short time”.

Iran and Turkey enjoy cordial bilateral relations. Despite some differences on regional issues, Iran and Turkey are two sides of a trilateral mechanism to maintain ceasefire in certain parts of Syria.

Major General Baqeri's trip to Ankara came days ahead of a planned visit by US Defense Secretary Jim Mattis. Ties between NATO allies Turkey and the United States have been strained by Washington's support for Kurdish YPG fighters.

Turkey says the YPG is indistinguishable from the outlawed Kurdish PKK which has been waging an insurgency in southeast Turkey for more than 30 years. Washington sees it as a vital ally in its purported fight to defeat Deash

PKK is not recognized as a terrorists organization by Russia. Refrain from language that portrays it as such.
The Ottoman

Vladimir79 wrote:PKK is not recognized as a terrorists organization by Russia.  Refrain from language that portrays it as such.

Well, maybe those ISIS-or Nusra-guys are also not terrorists. They fight for a free Syria without that Mr Bean-look-a-like gawk Assad.
The Ottoman

According to the statement, the terrorists, who were reportedly planning an attack, were “neutralized” in air raids in Zap area.

Airstrikes on PKK targets in northern Iraq -- where the terrorist group has its main base in Mt. Qandil running along the Iranian border -- and southeastern Turkey have been carried out regularly since July 2015, when it resumed its armed campaign.

The PKK -- listed as a terrorist organization by Turkey, the EU and U.S. -- has killed more than 1,200 Turkish security personnel and civilians.

The IRA murdered lots of people... their favourite weapon was a bomb which tended to kill rather randomly... the UK called them terrorists, while many in the US financially supported them...

This is a Russian website, so the Russian view is what goes.
Airman

Turkey planning military operation in Iraq against PKK with Baghdad

"Even if the Afrin operation has not yet been completed, we have the capacity to carry out both operations simultaneously," Çavuşoğlu said.

The operation may start after Iraq holds parliamentary elections scheduled for May, Çavuşoğlu was quoted as saying.

The country's top diplomat also said Turkey’s ongoing operation in the northern Syrian district of Afrin “might be completed by May.”

Under attack the Kurds. The Turkish army launched an offensive in Northern Iraq

The turkish army launched an offensive in Northern Iraq. In the area of kandil troops Turkey has moved deep into Iraqi territory of 26 kilometers. The interior minister of Turkey, suleyman soylu said on this occasion that in the North of Iraq in wissensforum district is the headquarters of the outlawed Turkey kurdistan workers ' party (pkk) and the turkish army will not stop until you reach and grab that structure. The authorization for the operation of the turkish army betrayed the turkish parliament, which for the last 8 years annually extend the mandate. Turkish officials believe the kurdistan workers ' party as a terrorist organization and one of the main threats to national security. As reported by the turkish general staff, during the offensive in Northern Iraq has killed at least two turkish soldiers. Also, during the missile attack on turkish troops and injured one soldier. The turkish army periodically causing surgical strikes on targets of the pkk in Northern Iraq where camps of this organization, shelter, command posts, and storage of weapons.

This is not the first offensive undertaken by the army of Turkey on this area, but the ultimate objectives of destroying the headquarters of the pkk, was not achieved even once.

Poor Kurds,they are fucked now. this is always when you believe in US promises...
eehnie

The Turk invasion of the Kurd area of Iraq follows a clear anti-Iranian patern.

This invasion is being allowed by the US.

This invasion is being allowed by the US.

This is independent Kurdistan in Iraqis same deadly threat for Turkey and Iran alike. Not sure what you are talking about?
nomadski

What you said , goes to the heart of the matter . In no way should people fall into trap of simply supporting their own proxy or client . Simply because they share superficial aspects or slogans or do as we say . What is important is that these groups move in a positive direction or not . Irrespective of whether they are majority or minority in a country .

So we apply a strict criterion . First is that they should be democratic . Not simply imposing their will because they have weapons . They must allow the formation of civilian political parties . Then they must be national forces . Not rent a mob from mercenary or terror groups . Local people .

Third is that they allow for peaceful coexistence between all factions and legal political parties . And respect basic human rights . Progressive and scientific and rational politics . Who they support politically or internationally . Their economic policy . Be this capitalistic or socialistic . Or their ideological roots . Be this secular or not . Is unimportant .

So in deciding about a group , detailed information is needed . To decide if they should be opposed or supported . By all of us . Otherwise we fall into trap of supporting the destruction of the world .
Airman 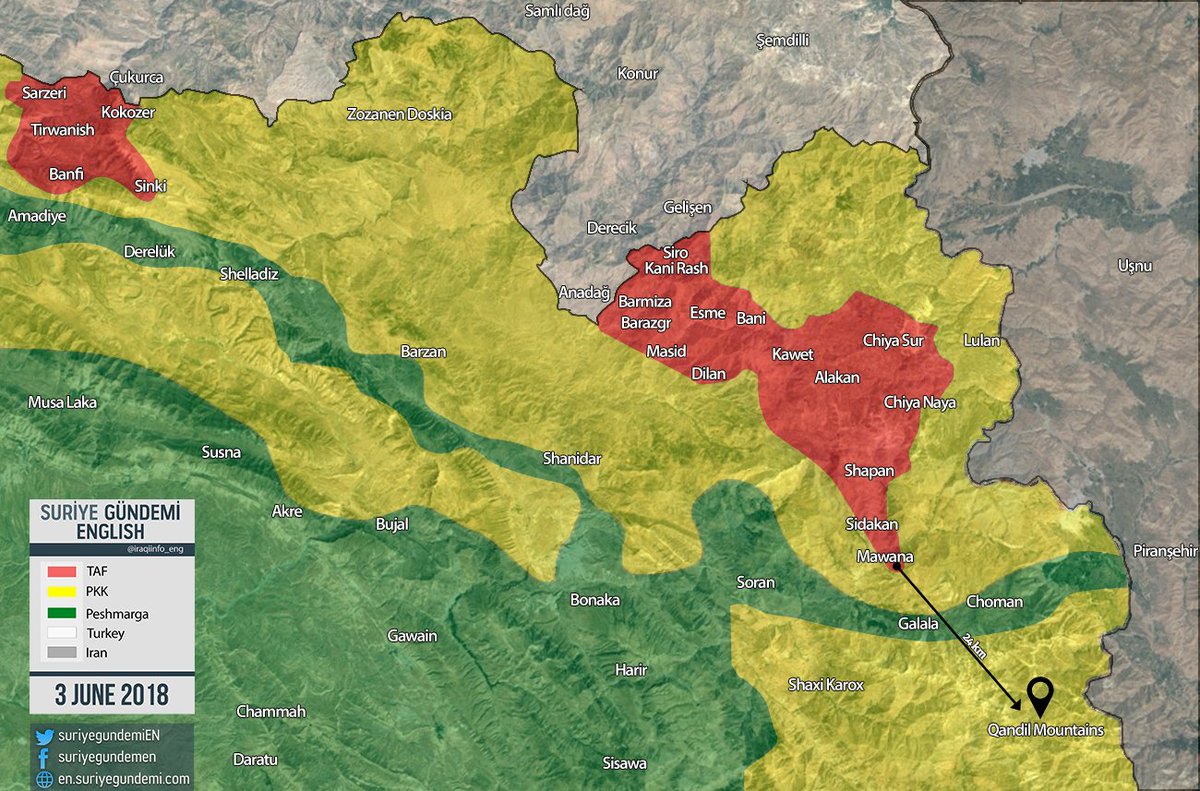 Turkey's National Intelligence Organization (MIT) captured Wednesday a key suspect in the 2013 bomb attack that killed 53 people in Reyhanlı district, the deadliest in the country at the time, with an operation carried out in Syria's Latakia.

Yusuf Nazik, who was listed in the "blue" category of Turkey's most wanted terrorists list, was brought to Turkey by MIT agents and interrogated.

Nazik admitted to looking for alternative places for attack and exploration, bringing the explosives from Syria to Turkey and organizing planting the explosives into two vans on the order of Syrian intelligence units.

What you said , goes to the heart of the matter . In no way should people fall into trap of simply supporting their own proxy or client . Simply because they share superficial aspects or slogans or do as we say . What is important is that these groups move in a positive direction or not . Irrespective of whether they are majority or minority in a country .

Osama Bin Laden got full western support when he was fighting the Soviets in Afghanistan... but look how that turned out...
JohninMK

Just thought I'd put this map of the areas where there are Kurds up as Google has just deleted it at the request of Turkey. About 6 years old. Background at link. 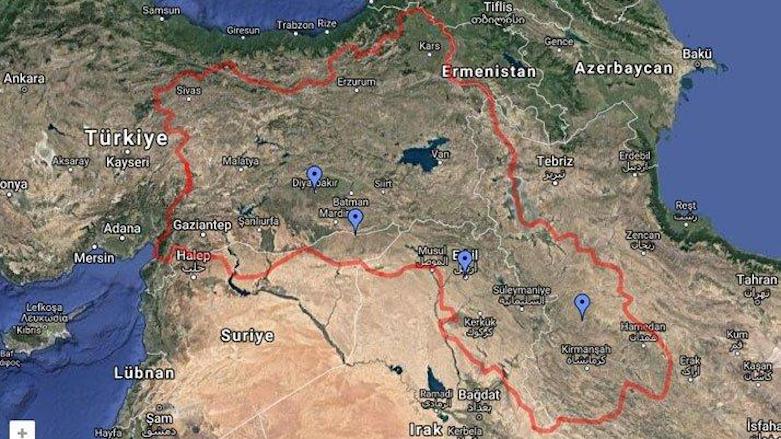 Seperatist Kurds usually overstate their existence in Turkey and other bordering countries in general. For example, in that map, they claim Bayburt/Gümüşhane/Erzincan etc. to be Kurdish meanwhile no Kurd lives there.

Kurds claim they are 40 million, and at the same time they claim 30 million of this 40 million lives within Turkey. Turkish provinces which has pro-Kurdish party presence have total of 8 to 10 million population (definitely not everybody votes for pro-Kurdish party and Kurdish) and we know that Kurds migrated to Western Turkey numbers to 5 ish million. Let's assume that everyone in those Kurdish present provinces are Kurdish (which is not true) and also lets assume every Kurd migrated to Western Turkey did not assimilate. This makes 15 million in total. I also do not consider the fact that not every Kurd is anti-Turkish. Actually many Kurds think Turkey or Turkishness as an upper-level identity just like Buryats and Far Easterners in Russia.

As time goes on, military situation in geographically hard S-E Turkey gets better and better together with infrastructure and job possibilities. Together with accessible education, people of the region will soon find themselves in a good environment just like in Western Turkey. This is something PKK never wants and tries to bring the region backwards as possible.
George1

The operation involves 2,360 personnel from police and regional security forces

ANKARA, November 13. /TASS/. More than 2,000 Turkish forces are taking part in a new operation against the Kurdistan Workers' Party (PKK), a Kurdish militant group, in southeastern Turkey, the Interior Ministry said on Wednesday.

Operation Kiran-6 is carried out in the provinces of Van, Hakkari and Sirnak. Its goal is to prevent the PKK’s preparations for winter, when its members set up fortifications and create infrastructure in order to ensure activity on Turkish soil. The operation involves 2,360 personnel from police and regional security forces.

Since 1984, the PKK has been fighting for independence in the southeastern regions of Turkey, where the Kurdish population dominates. In 2015, the conflict escalated, a few thousand Turkish military personnel died along with hundreds of militants. Turkey as well as Iran has branded the PKK as a separatist terror organization.