You are not connected. Please login or register
+3
par far
ATLASCUB
Airman
7 posters

TEHRAN (Tasnim) – Members of the Party for Free Life in Kurdistan (PJAK) terrorist group killed two Iranian border guards and injured five others in an armed clash in northwest of Iran.

According to reports, troops from ‘Ziyaee’ border company came under attack as they were moving along the border for a routine changing of guards.

Five other soldiers were injured in the attack.

PJAK is an offshoot of the internationally-recognized terrorist group, the Kurdistan Workers' Party (PKK), which conducts deadly operations in western Iran, northern Iraq and southern Turkey.

Not much of a problem for Iran for now. The Kurds will be an issue as long as U.S presence and influence in the region stays strong. They get inspired of sorts...

That's why, and I'll say it for a billionth time.... a Kurd autonomous region/mini-country is bad news for everyone there.

I'm always a bit confused as to Russia's position on the Kurds. On the one hand the Kurds can be used to potentially split up Turkey/burn it in a civil war and make it an insignificant foe once and for all...on the other, it destabilizes the region and seeks refuge in U.S skirt = military bases and forward deployments = guaranteed U.S presence in the region on yet another plot of land. So what's the benefit of sticking it to Turkey and having the replacement be just as bad on the geostrategic side? Obviously working under that assumption....

The alternative is Russia opposed to anything of this sort and just dealing with reality to sort out the Syrian conflict.
Airman

PJAK (PKK's Iran-wing) offers Iranians to fight together against the Iranian government. The statement says, they have already launched a "struggle".
https://twitter.com/op_shield/status/947170482150871044
par far

I think Iran knew that this was coming(at least to some extent), after losing in Syria and Iraq, the Zionists failed to curb Iranian influence. So now they will use the Kurds against Iran. There is a side effect to this that the Zionists have over looked, this will push Syria and Iraq more closer to Iran and Russia. This will also bring Turkey(they cannot be fully trusted) and other regional countries closer to Iran and Russia.

The Kurds and the ongoing protests are all part of the Zionist plan against Iran, Iran has to play smart here. First, take care of the protests, use force where ever needed and clam them with, saying that the poverty and economic situation will be taken care and people should return to their houses, than announce that a part of the GDP(this does not need to be big), will be put towards reducing poverty, improving the economy for the poor and getting more jobs for the poor(this should be able to calm down the situation.) Than go after the leaders and organizers of these protests(identify the main the culprits) and expose them to the Country and the World.

After the protest situation has calmed down, go after the terrorist groups that are a threat to Iran, does not matter if they are inside Iran, on Iran's borders or far away from Iran, send them a message.

If Iran was smart they would ask for Russia's help(I am sure that Russia would be more than willing to help and the Russian intelligence agencies can gain valuable experience from this.)
Airman

The KDPI said that the Iranian rocket strike targeted a conference held by the political office of the party and a nearby refugee camp. According to the Kurdish group, 11 people were killed and up to 30 others were wounded in the rocket strike. Kurdish activists revealed that most of the casualties were members and officials of the KDPI and the PDKI.

Meanwhile, Babak Taghvaee, an Iranian defense analyst, said that the Iranian-made Zelzal precision guided artillery rockets and an unspecified type of unmanned aerial vehicles (UAVs) were used in the attack on the Kurdish parties in Koya. The rockets were reportedly launched by the Islamic Revolutionary Guard Corps (IRGC) from a large base in the southern part of Iran.

Several Iranian activists said that the rocket strike was a response to a recent attack of the PDKI, in which several personnel of the Iran Border Guard were killed. The PDKI and the KDPI were planning to launch more attacks in the upcoming days, according to the activists.

The Iranian rocket strike was also viewed as a show of force and a message to the country’s enemies, especially that the rockets hit its targets with an impressive precision."

Keep them honest. Although they won't give up hope as long as the U.S gives them hope.
JohninMK

#BREAKING: #Iran|ian media was talking about use of Fajr-5C rockets by #IRGC against the #PDKI HQ in #Koya, N. #Iraq today. But according to this video which shows launch of the rockets from NW. #Iran, they were Zelzal precision guided artillery rockets which have solid fuel.

#BREAKING: It is now confirmed that 8 Fadjr-5C precision guided artillery rockets are launched at #PDKI HQ in #Koya, N. #Iraq destroying the building killing 5 of #PDKI leaders. Rockets were launched from #Hamzeh garrison of #IRGC NW. #Iran & were guided by 2 Mohajer-6 UCAVs.
JohninMK

It seems, that Iranian missile strike struck a huge blow one of the separatist Kurdish group - KDP-I. Around 40 members of KDP-I discussed preparations for party congress when first Iranian missiles struck building. 14 dead, others buried under rubble.

So it seems modern Iranian SRBMs are indeed precision-guided and capable of hitting point targets, as advertised. A huge problem for Israel in case of a new war vs Hezbollah..

Dutchman ????????@vvanwilgenburg (Pro Kurdistan) confirms that the #Iran/ian missile operation to destroy the PDKI HQs was a complete success, despite some claims of anti Iran entities like Babak Taghvaee that the attack had failed. He confirms that the HQs was hit by 6 or 7 missiles
JohninMK

A wake up call.

#IRGC showed its surface-to-surface precise missiles, drone (footage of the base in the aftermath of the strike) & intel capabilities to #USA #Israel & #SaudiArabia .

Iran Sunday claimed responsibility for an attack on a DPK base in #Iraq, killed 11 & wounded 50. 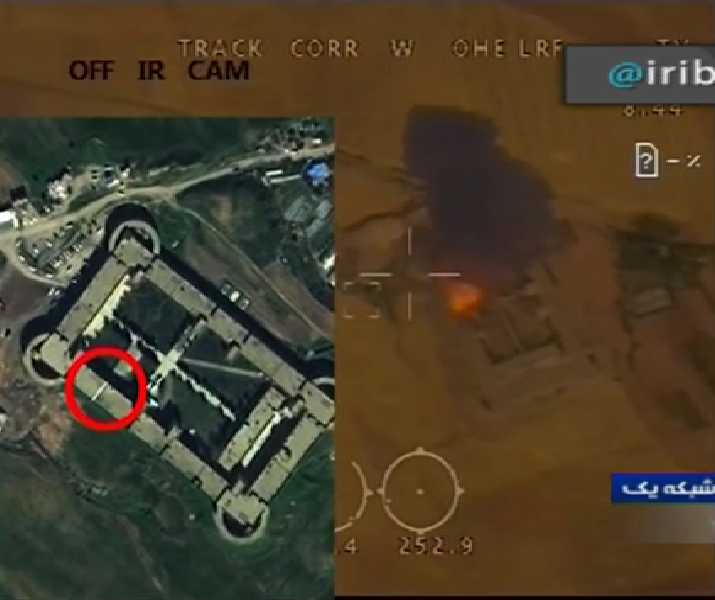 "On September 9, a series of Iranian strikes targeted positions of the Kurdistan Democratic Party of Iran (KDPI) in the Iraqi Kurdistan Region.

The strikes started at around 6:00 am local time. Iranian warplanes, suicide drones, and artillery targeted a number of positions of the KDPI in the areas of Sidakan, Choman and Haji Omran in the province of Erbil."

What are the chances that Iran and Turkey slowly come close?