The Dalzavod Ship Repair Center has completed the builders’ sea trials of the Karelia medium intelligence ship following comprehensive repair and retrofit. After that, it was handed over to the Pacific Fleet, Dalzavod’s press service reported to the online agency Flotprom. 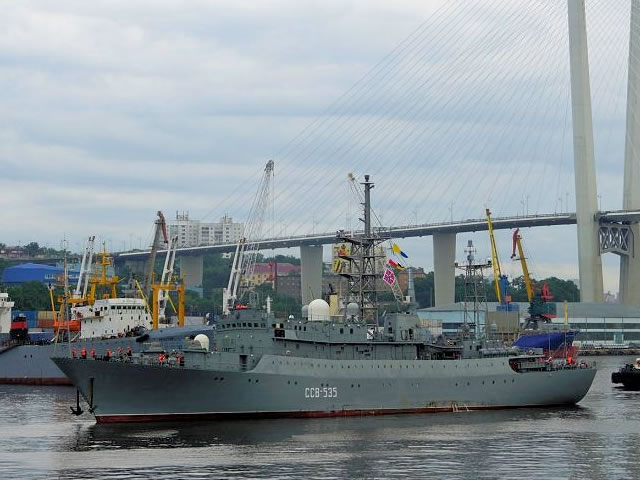 Karelia medium intelligence ship. Picture: press service of the Central Council of "Dalzavod"
"The sea trials program has been successfully completed. The ship’s main propulsion plant, main units and mechanisms, navigation and communication equipment were tested during the sortie into the sea," said Dalzavod’s executive director Igor Evdokimov. "The ship rejoins the Pacific Fleet with the extension of the mean time to repair for five years."

The ship Karelia had been mothballed for more than 10 years until January 2014 when Dalzavod started comprehensive repair and retrofit of the ship. In the process of recovering the ship’s technical readiness, the main engine, all units and mechanisms were repaired, and advanced navigation and communication equipment was installed. All the spaces of the ship were repaired and the the living conditions for the crew were improved substantially. Just like on the large landing ship Oslyabya, handed over to the fleet in the spring of this year, modern polymer coatings and painting techniques were applied during repair work.

As reported on August 23, 2017 by RBC agency, Kalashnikov Concern concluded in 2017 a contract with the Ministry of Defense of Russia for the supply of 15 boats. This was announced by RBC general director of the company "Rybinsk Shipyard" Sergei Antonov at the exhibition "Army-2017". The contract value is "about 800 million rubles.", He added. "We supply six BK-16 units and nine BK-10 boats. The contract is designed for two years: a part is delivered this year, and a part is in the next, "explained the general director of Rybinsk Shipyard (Kalashnikov's daughter company). 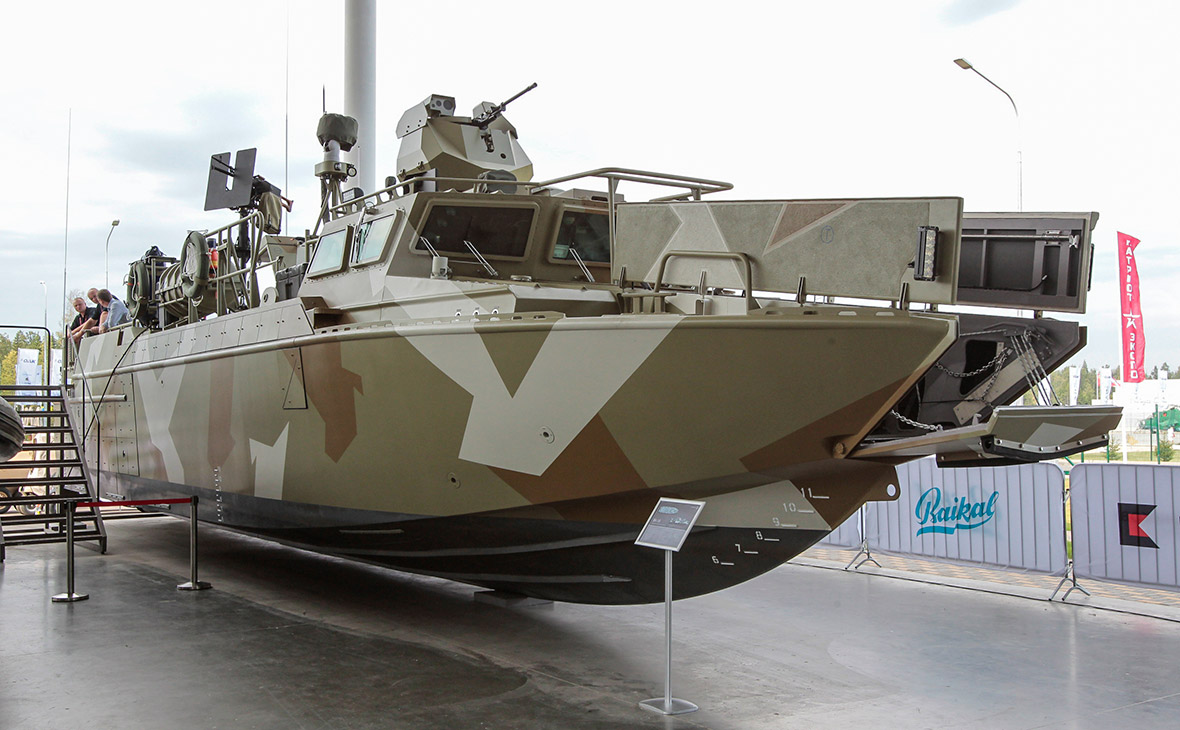 "The flag-raising ceremony on the boat was held on the sidelines of the Army-2017 International Military Forum," the statement adds.

Now the number of the Grachonok-class counter sabotage boats assigned to the Northern Fleet has grown to three. The first one of them, named "Yunarmeyets Zapolyarya," participated in the country’s main naval parade in the city of St. Petersburg.

The Grachonok-class counter sabotage boats have been developed by the Vympel Design Bureau and built at the Vympel shipyard in Rybinsk in the Yaroslavl Region, central Russia. They are designed to protect water areas and fight sabotage and terrorist groups in coastal waters. The Project 21980 counter sabotage boats are armed with large-caliber machine guns, depth charges and man-portable air defense missile systems.

The boat’s radio electronic equipment is capable of searching for moving underwater targets, including small ones, such as divers.

Assume this is the correct thread for this. Really deep analysis of the ship at the link 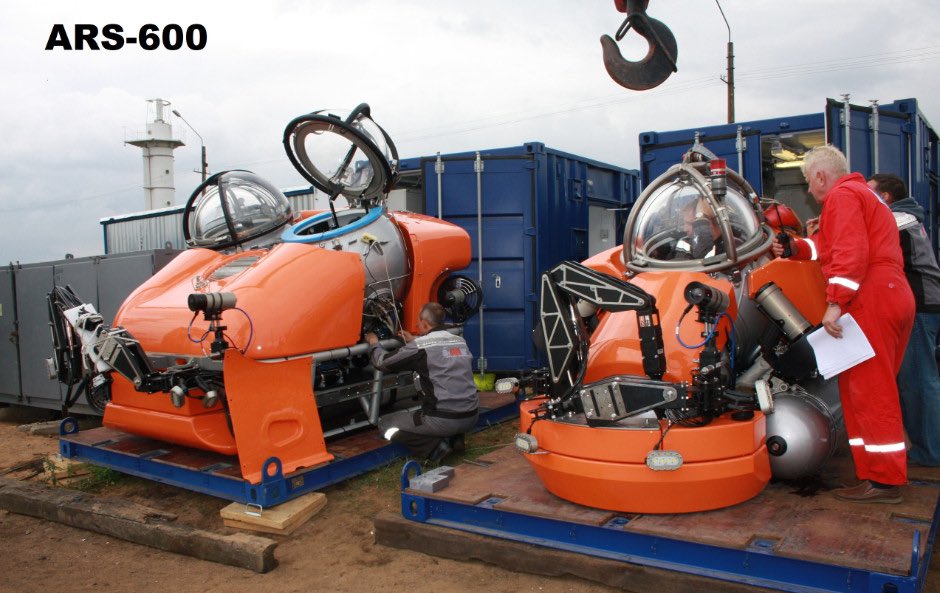 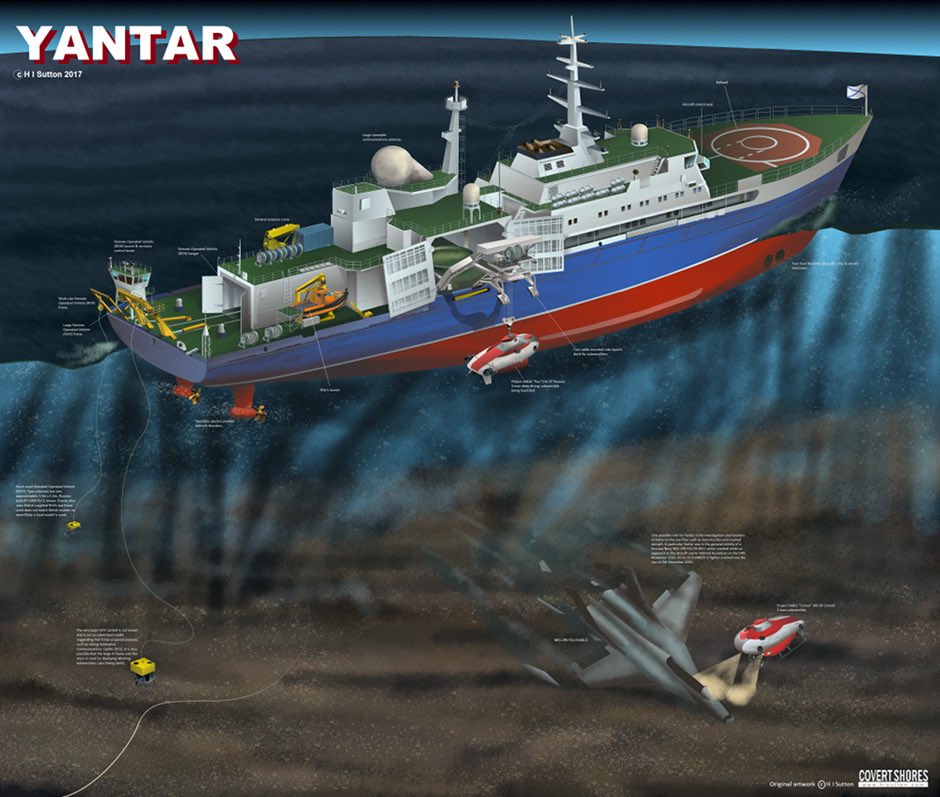 No idea. These are at the link as well.
franco

I have the same problem with him and Calm sometime. What I do is hit the quote button in the bottom right hand corner. You can then see the links but you will have to copy paste them into a new tab to open the link. I suspect John was a lawyer in another life... probably for my ex-wife.

I have the same problem with him and Calm sometime. What I do is hit the quote button in the bottom right hand corner. You can then see the links but you will have to copy paste them into a new tab to open the link. I suspect John was a lawyer in another life... probably for my ex-wife.

Never a lawyer but I wrote a few contracts and had a case in our High Court!

I'd better start putting the links in as well as using the convenient button above.

In the center, the middle naval tanker of project 23130 "Akademik Pashin" 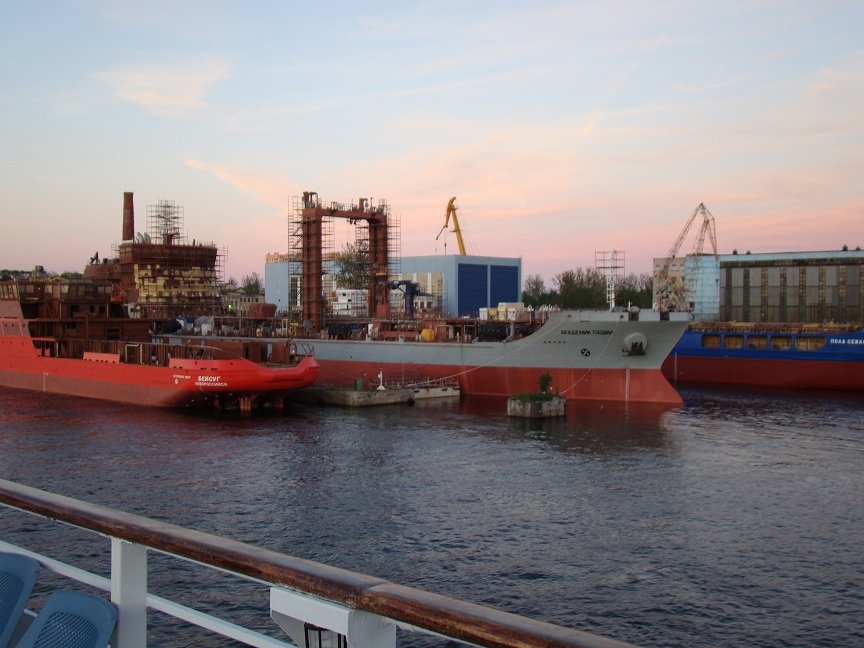 This would be the list of auxiliary ship projects (included not shipborne crafts) present in the Russian Navy by the begin of 2018 or little after:

Officially ordered, the first unit in construction by the begin of 2018: 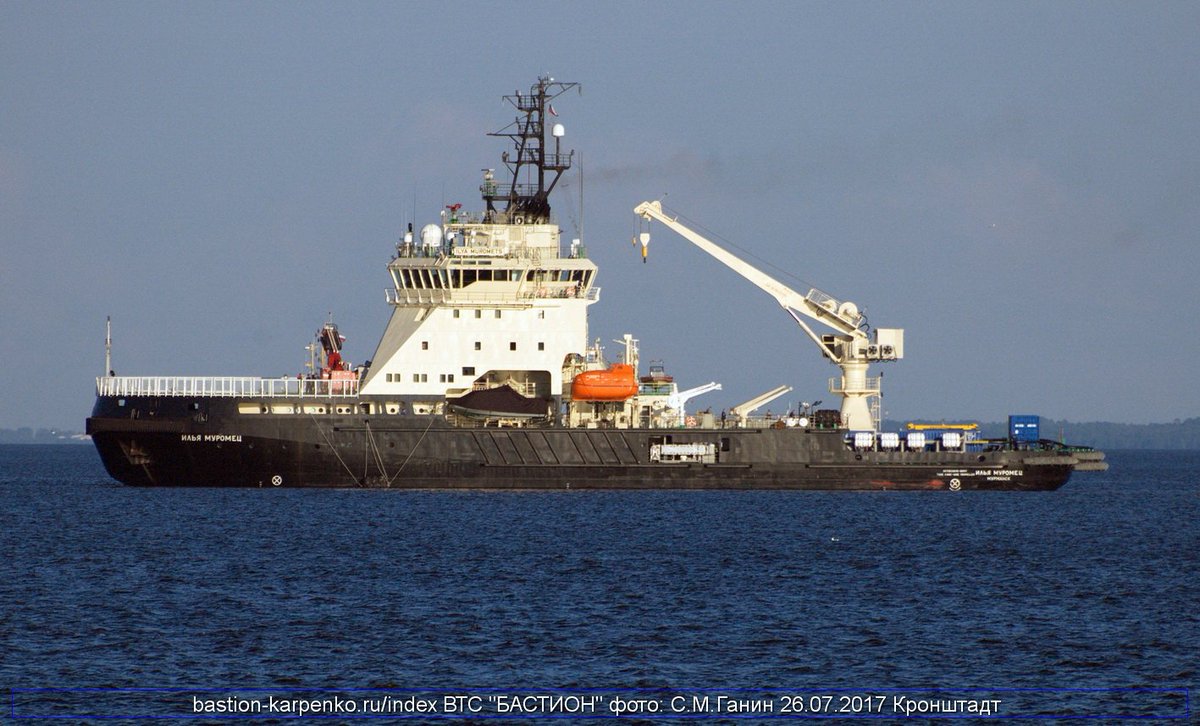 In 2019, the Navy will receive two newest Project 19910 hydrographic vessels with increased sailing autonomy and an enhanced ice type, said Captain I Rank Sergei Travin, Chief of the Navigation and Oceanography Administration of the Russian Defence Ministry at the practical conference dedicated to the 220th anniversary of the birth of Admiral Fyodor Litke, which was held at the Central Naval Museum in St. Petersburg.

According to Captain I Rank Sergei Travin, one of the Project 19910 hydrographic vessels is being built at the shipyard Vympel in the city of Rybinsk and through the Russian Navy C-in-C’s she has been assigned the name Nikolay Skosyrev, and the second vessel – Aleksandr Rogotsky – is being constructed on the stocks of the Blagoveshchensk Shipbuilding Plant. All the works are going according to the schedule and under the control of the Navy's High Command.

"These vessels will meet the highest requirements for hydrographic vessels. They will have increased autonomy of sailing and will be able to take on board increased numbers of military hydrographs, what, of course, will allow hydrographic expeditions to be carried out at a new level of efficiency," said the Chief of the Navigation and Oceanography Directorate of the Russian Defence Ministry,

He also stressed that 19910-project hydrographic vessels are to be armed with the most modern equipment for hydrographic studies of sea areas.

"These two vessels are built taking into account proposals and recommendations based on the experience of testing and operation of the previous vessels of this project - the head and the first serial ones. They will be even more perfect for a number of opportunities," said Captain I Rank Sergei Travin.

Project 19910 hydrographic vessels are designed for servicing navigation equipment, delivering cargo to unequipped coasts, performing research with a multi-beam sonic depth finder. They will have a strengthened ice type and will also be able to work not only in deep sea conditions, but also in shallow waters.

Don't russia have every information about seas and ocean thanks to USSR ? Why build hydrographic vessels ?
GarryB

Currents change... sand bars shift... you need to keep it all up to date or it becomes useless. 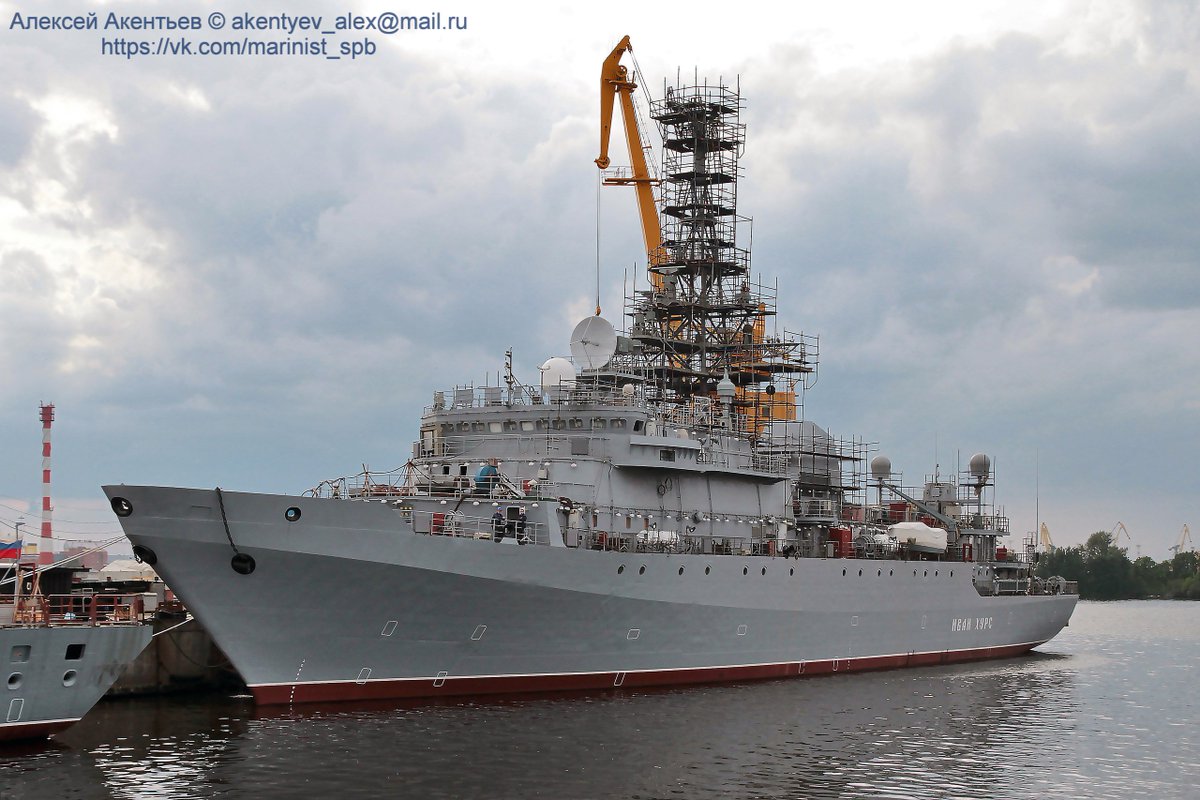 Isos wrote:Don't russia have every information about seas and ocean thanks to USSR ? Why build hydrographic vessels ?

Isos wrote:Don't russia have every information about seas and ocean thanks to USSR ? Why build hydrographic vessels ?

Can you develop what those ships are analizing and what instruments/tools they use ?? I've never looked for those informations actually idk anything about it. I suppose they want information principaly for their subs so they don't get surprised by currents like garry said.
GarryB

Having accurate maps is critical in war... doubly so underwater when most of the time you can't see where you are going.

Finding places to hide, finding potential hiding places the enemy might use, or just the safe navigation through an area...

Satellites can use radar to map many areas but close in mapping with ships takes longer but gives more accurate information.

They can also be used for other things like sampling water and accurate deep penetration radar to detect the structure of the ground under the water, or finding lost objects on the marine floor.

They can also locate cables etc...

Looks like those two unfinished Soviet Tarantul class boats that Vympel is working on now will be getting bit more radical redesign than originally expected:

Looks like those two unfinished Soviet Tarantul class boats that Vympel is working on now will be getting bit more radical redesign than originally expected: 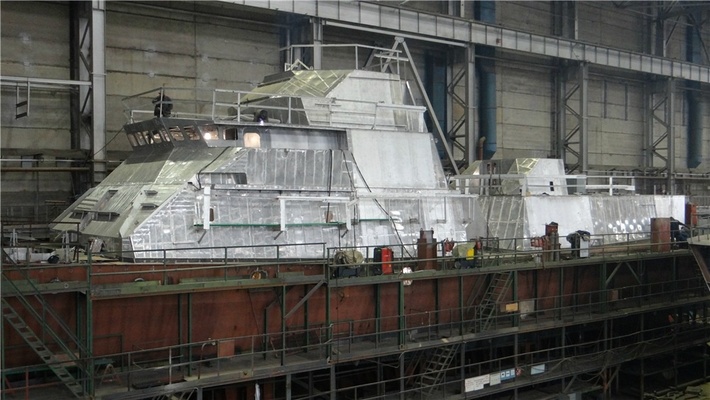 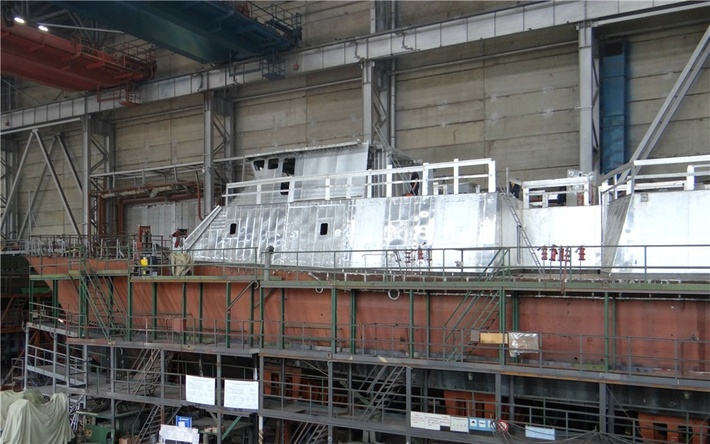 Originally the were supposed to be converted into Molonya class boats like these: Clearly they are doing something different with them. Internal space will be enlarged, Uran launchers will be moved to the middle and will be 2X4 instead of 4x4. 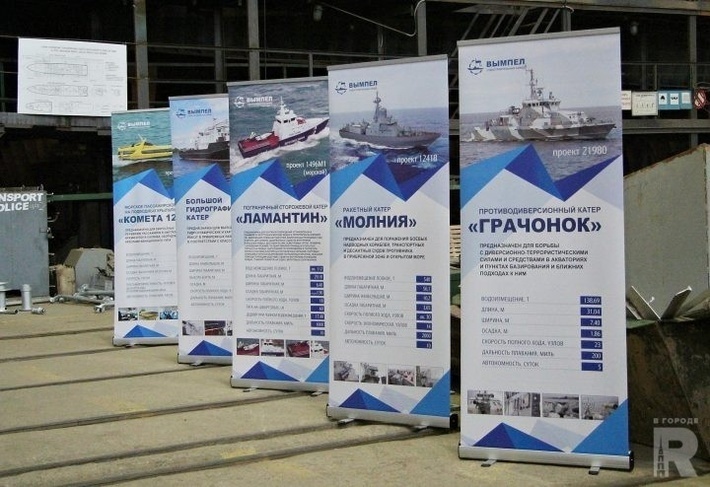 October 7, 2017 JSC "Leningrad Shipyard Pella" (Otradnoe, Leningrad region) reported the signing of the act of acceptance and transfer to the customer (Russian Navy) of the next "patrol boat" project 03160 (code "Raptor") with the building number 712, the composition of the Baltic Fleet is presumably P-345. The launch was launched on 30 May, the acceptance certificate was signed on 29 September. 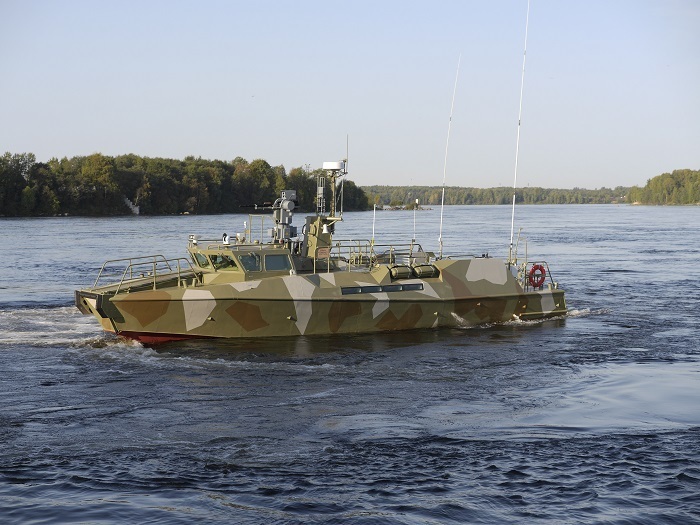 This is the first boat of the project 03160, built by the Pella plant in 2017, and the fourth, built under the contract for the construction of eight boats of this type, concluded with the Russian Defense Ministry in May 2016. Earlier, two boats for this contract P-415 and P-425 (building numbers 709 and 711) were launched at Pella in December 2016 and became part of the Black Sea Fleet on May 8, 2017, and another P-342 "Unarmeets" Baltika "(building number 710), launched on December 14, 2016, was transferred to the Baltic Fleet.

August 24, 2017 at the factory "Pella" was launched the next boat of this type with the building number 713, planned to be entered into the Caspian Flotilla.

Earlier, under the previous contract in 2014, the Pella plant passed to the Ministry of Defense of Russia eight project 03160 vessels during 2015 - four planned for the 2014 program, and four for the 2015 program. Of these boats, seven (building numbers from 701 to 705 and from 707 to 708) are officially listed as part of the Russian Navy counter-sabotage boats. In fact, according to known data, these boats are used in fleets as part of naval reconnaissance points for special purposes. Of these, two boats (P-280 and P-281, the corresponding building numbers 705 and 704) are part of the Baltic Fleet, based on Kronstadt, and the remaining five (P-274, P-275, P-276, P-838, P-845) - are part of the Black Sea Fleet, based on Novorossiysk and Sevastopol.

Another cutter of project 03160 P-344 with building number 706, commissioned in August 2015, was built in the form of a communications boat - in fact, as a traveling boat for VIP transport. Formally considered to be part of the Baltic Fleet, the P-344 boat is constantly moored at the DBR-481 berthing berth complex-project 02590 of the National Defense Management Center of the Russian Federation on the Frunzenskaya embankment of the Moskva River, and, apparently, is used as a personal cutter of the Minister of Defense Russia.
The head boat (prototype) of the RM-15 project 03160 Raptor, designed and built by Pella on the instructions of the Russian Navy, was launched at the enterprise on August 15, 2013 and handed over to the Navy in 2014, and is now being used as part of the Black Sea Fleet. Thus, "Pella" has surrendered in total 13 already boats project 03160.