Ok we know some thing about this new Avangrad ICBM , atleast one prototype the first one fired in November crashed due to first stage failure.

But from Yuri Interview he game some hints what the new ICBM can contain.

"I cannot be specific about the details but new design solutions will significantly boost the fire control and communications components of the system," said Yury Solomonov, general designer at the Moscow Institute of Thermal Technology.

As far as land based ICBM goes the production of Single Warhead Topol-M SS-27 has been stopped and they are producing MIRV RS-24.

Eventually they will produce 2 types of ICBM one is RS-24 and the other is new Avangrad. They will replace the remaining SS-25 and SS-19.

So the future Land Based ICBM fleet of SRF will be

Not sure if SS-29 is the official/NATO designation given to RS-24.
GarryB

It hasn't entered service so its correct designation... if it is going to get called SS-29 would be SS-X-29.

Some sources said that is a land version Bulava

BTW minor correction... TOPOL-M and Yars are not the same missile.

This new missile is a new missile, and might... as rumours suggest be based on Bulava, though that would be unusual.

SLBMs are designed to fairly restricted parameters which effects their range and performance, though that might be useful in a truck or rail mobile system.

The advantage of an ICBM based on Bulava is that Bulava has 10 warheads max, but I understood the purpose of the RS-24 Yars was to be a Topol-M with larger warhead capacity...

Perhaps they think a modified Bulava might be cheaper.

There are more differences between the Saturn 1 to Saturn 5 rockets than there are between these Russian weapons, but by giving them different western designations they can pretend that Russia is in the middle of a massive arms race... they are making 4 or 5 different new missiles with plans for more... same old games.

Bulava is hardly a navalised Topol-M , its a different class of missile differing from Topol-M substantially , the only common it has is it is designed by same design bureau which is MITT.

Avangrad being a modified variant of Bulava is not surprising it was hinted in an interview by Yuri Solomonov last year when Bulava was facing some problem that a land based variant could be developed based on Universal Concept.

A small light solid fuel ICBM is always an advantage in mobility and foot print , reportedly it uses a new type of truck.
GarryB

Bulava is hardly a navalised Topol-M , its a different class of missile differing from Topol-M substantially , the only common it has is it is designed by same design bureau which is MITT.

Bulava is a navalised Topol, not Topol-M.


A small light solid fuel ICBM is always an advantage in mobility and foot print , reportedly it uses a new type of truck.

Of course it will likely have a range of about 8,000km so it would be classed as an ICBM, but it could be used in roles IRBMs were used previously before they were banned from Soviet and US arsenals.
Austin

Its just a myth created by media that Bulava is navalised this or that.
GarryB

One of the selling points made by the company that makes the missiles was that Bulava is a modified Topol so most of the design work had already been done and there would be benefits to having a unified missile for naval and land forces.

I agree there are lots of comments that are repeated and become facts, though they are myths because there was no official source... just speculation repeated in absence of fact becoming fact.
coolieno99

the new missile is basically a land-based version of the Bulava.


... Prototype of new Russian intercontinental ballistic missile (ICBM) tested on May 23, 2012 at Plesetsk Cosmodrome is a ground-based version of submarine-launched ballistic missile (SLBM) R-30 Bulava, writes Kommersant referring to sources in rocketry engineering industry. Both missiles have similar parameters. By that test launch, the Bulava-developer Moscow Thermotechnics Institute kicked off the work to unify prospective ground- and sea-based delivery vehicles ...

A smaller, lighter, more compact weapon for truck mounted land mobile use makes a lot of sense... especially if it can be made of similar parts to another missile in production.
Austin


Also these two links indicate the new ICBM tested was Avangrad-R and R&D technical name for new heavy liquid fuel ICBM is Inevitibility , it will likely be based on Silos and Trains , Lots of other details 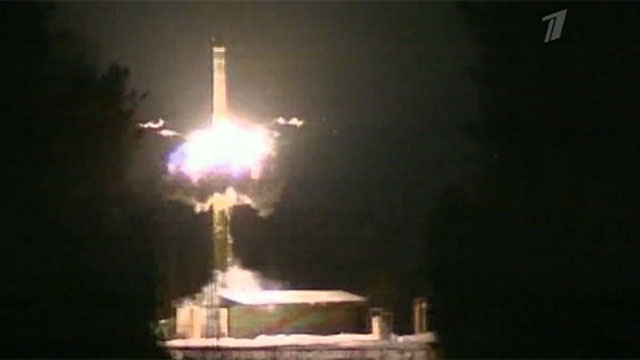 The new missile that was tested in Kapustin Yar on October 24, 2012 remains a bit of a mystery, but probably not for long. As I was going through my old notes, I discovered that the commander of the Rocket Forces, Sergei Karakayev actually described the new missile in some detail in his December 2011 interview.

He mentioned a development of a new "medium-class" solid-propellant missile "with a new type of combat payload" that will be deployed on mobile launchers as well as in silos. Karakayev said that the new missile is build "on the basis of the technical solutions implemented during the development of the Yars missile." He also said that deployment of the new missile is expected to begin in 2015.

So, everything suggests that it is an evolutionary development of the Topol-M/Yars line (as it was suggested at the time of the first failed launch attempt in September 2011). The "medium-class" reference could suggests that the new missile is somewhat heavier than Topol-M/Yars, although probably not much - it should still be light enough for a mobile launcher. The initial reports suggested that the new missile uses the same first stage as Yars (that explains Karakayev's "Yars technology" reference), so the difference is probably in larger upper stages. The missile could probably fit in the same launch canister (but it's just a guess). The "new combat payload" part explains the launch from Kapustin Yar to Sary-Shagan. I hope that we'll hear more about the new missile soon.

"According to the latest information, it will be accepted into service in 2014; the new weapon is part of a response program to the United States ballistic missile defense program," the source said, without naming the new system.

The Strategic Missile Forces test-fired a prototype of the new weapon in October from the Kapustin Yar test range, he said. "This was a test launch as part of combined state trials," he said, adding the weapon will be formally accepted only after completion of those trials.

The new weapon will be primarily based on mobile launchers, he said. "So far there has been no decision on whether to base them in silos," he added.

The missile will have intercontinental range, or more than 3,500 miles (5,500 kilometers), he said.

Medium Class bro not Medium Range . In other words it's only the throw weight that will be less than Topol .

The main reason for carrying out this test is to

No , it does NOT violate Intermediate-Range Nuclear Forces Treaty as the eventual range will be in excess of 5500 kms.
George1

Medium Class bro not Medium Range . In other words it's only the throw weight that will be less than Topol .

The main reason for carrying out this test is to

No , it does NOT violate Intermediate-Range Nuclear Forces Treaty as the eventual range will be in excess of 5500 kms.

The missile will have intercontinental range, or more than 3,500 miles (5,500 kilometers), he said
Sujoy

George1 wrote:The missile will have intercontinental range, or more than 3,500 miles (5,500 kilometers), he said

Precisely ! That's why it does not come under the ambit of the Intermediate-Range Nuclear Forces Treaty. This treaty is limited to missiles with range from 500kms - 5500 kms. It does NOT cover ICBMs.

That said , Russia can easily bring the range of this missile down to 5500 kms just to remind NATO that it has other options if the US goes ahead with it's ABM system deployment plan in Europe.

Now we know the official name is not Avangard but Rubezh(Рубеж), and "Begin Deployment of the first missile regiment in 2014 year "
GarryB

Not surprising that the new ICBM is solid fuel . While liquid-fuel rockets (as compared to solid-fuel ones)have higher launch-weight to throw-weight ratio, they are also characterized by more durable boost-phase which makes them easier targets to interception than high-acceleration solid-fuel missiles.

However, Parallel separation warheads are much heavier than the 'traditional' warheads . Therefore there is a requirement to either reduce the number of warheads per missile (which contradicts current Russian intentions) or utilize boosters with greater payload.

Sujoy wrote:A heavy liquid-fuel missile could be an attractive option to solve this dilemma, mainly because solid-fuel missiles do not promise that straight-forward and effective solution as liquid-fuel ones do.

Next Russian heavy ICBM will be liquid fueled.