The VMF likely had a play with the Indian Mig-29Ks , but these will be the models built for them so it will likely have all new (to the VMF) modern weapons so this will be very good.

Meh, I swear I saw 1-2 MiG-29s buzzing around my base round about Summer '11 onwards. Not always easy to tell a Su-33 from a MiG-29; but I think they flew close enough for me to be confident I made a positive ID.

The Kuznetsov's airwing (279th KIAP) was based about 3km away (their home; the Kuzya is only their home away from home) and they were flying over and around us every other day; so I can only assume the MiG-29s were deployed to the same airbase - it was the only strip around for many miles.

Funny thing is that as I recall - the MiG-29s were painted in Strizh colours. Either that or something close; like the top of the fuselage was red with an outline of a huge white star over the top of it. Something like that.

Based on this - I don't think they were MiG-29Ks; in any case I'm not sure if there were any such aircraft in Russia at the time.

Could it be that they were lent a couple MiG-29 aircraft, and had instructors from the Strizhi or some other expert pilots instructing and familiarizing them with the aircraft ahead of the introduction of the MiG-29K?
Would make sense - they are Russia's only shipborne fighter regiment and one of the most critical and likely to see action; so the high quality of their training is paramount.
George1

The Naval Aviation of the Navy received four serial ship fighter generation "4 ++". Under the terms of the contract, "RAC «MiG» must deliver to the Ministry of defence of 24 marine fighter aircraft MiG-29 k/KUB until 2015.

The Russian Defense Ministry signed a contract with MiG in February 2012 for delivery of 20 MiG-29K and four MiG-29KUB fighters by 2015.

The aircraft will be deployed on Russia's sole serving carrier, the Admiral Kuznetsov, based in Murmansk with the Northern Fleet.

The MiG-29K is a naval variant of the MiG-29 Fulcrum fighter jet, and has folding wings, an arrester tail-hook, strengthened airframe and multirole capability thanks to its Zhuk-ME slotted array radar, MiG says.

Unlike the Su-33, which is capable of air defense missions only, the MiG-29K can be armed with a wide variety of air-to-surface as well as air-to-air weaponry and laser-designation systems.

The aircraft is also capable of “buddy” refueling other MiG-29Ks using the PAZ-1MK refueling pod.

So far, the aircraft has only entered service with India, for use on the refitted Russian-built carrier INS Vikramaditya, which was handed over to the Indian Navy on November 15.
mack8

No photos of the first 4 MiG-29K/KUB in VMF colours?

Where will they be based, at Yeisk?
SOC

mack8 wrote:No photos of the first 4 MiG-29K/KUB in VMF colours?

Where will they be based, at Yeisk?

They've installed the ski-jump and arrested landing strip at Yeysk and are resurfacing the parking areas and building a bunch of new aircraft shelters (I see 25 foundations currently). So, they could go there, sure. Or, they may well simply go there for training but have their permanent home at Severomorsk-3, displacing the Su-33s and making it simpler to join with the carrier for deployment.
TR1 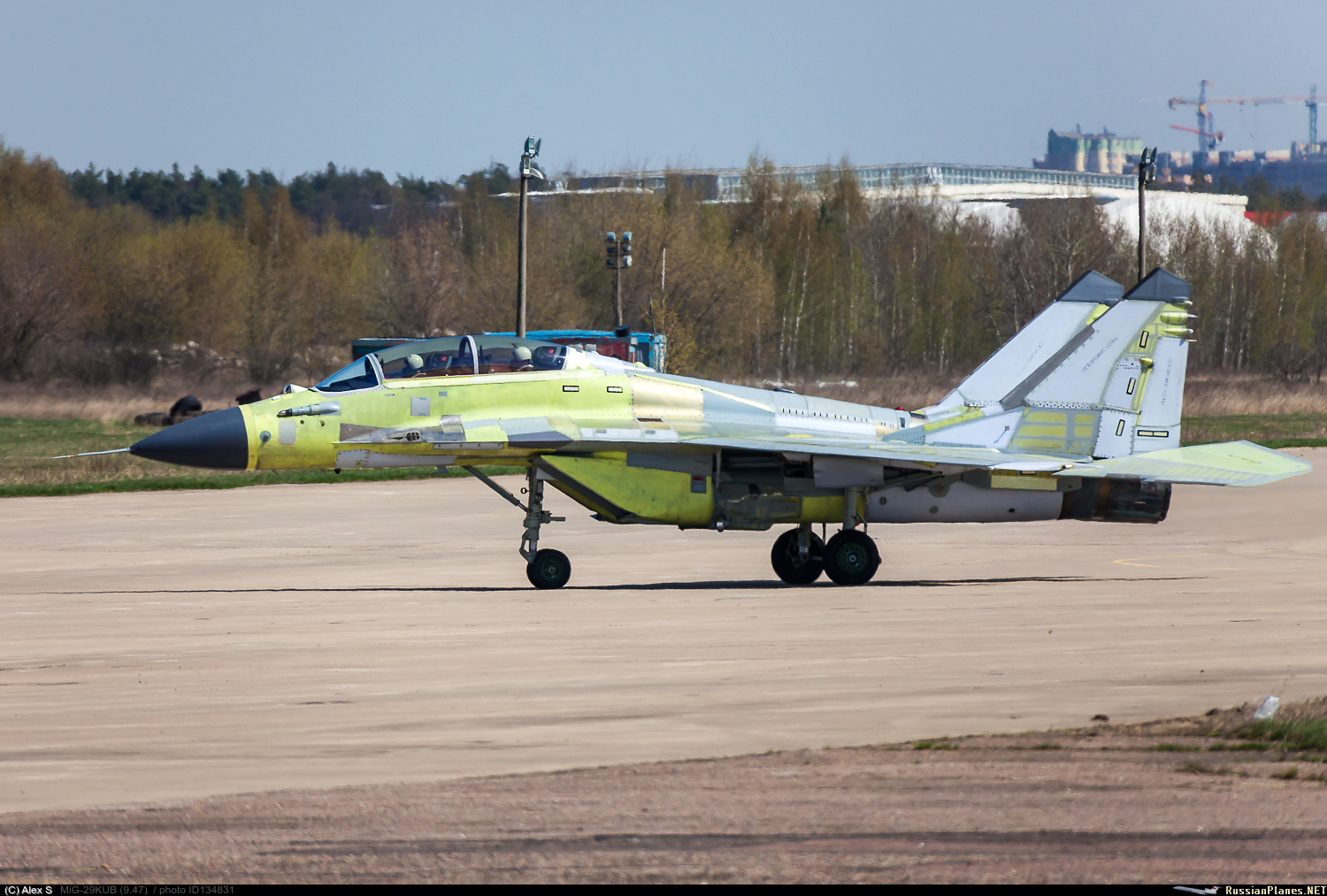 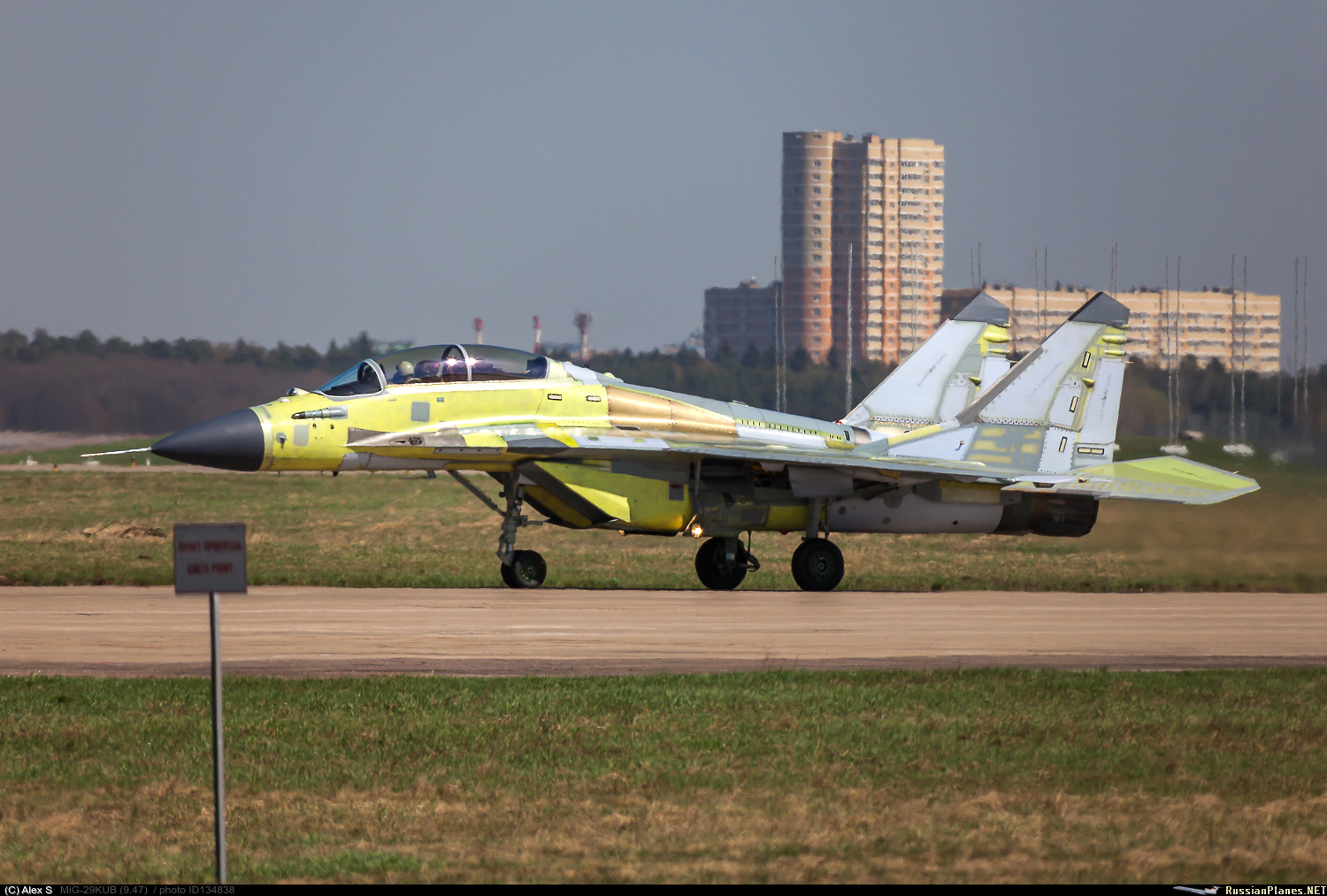 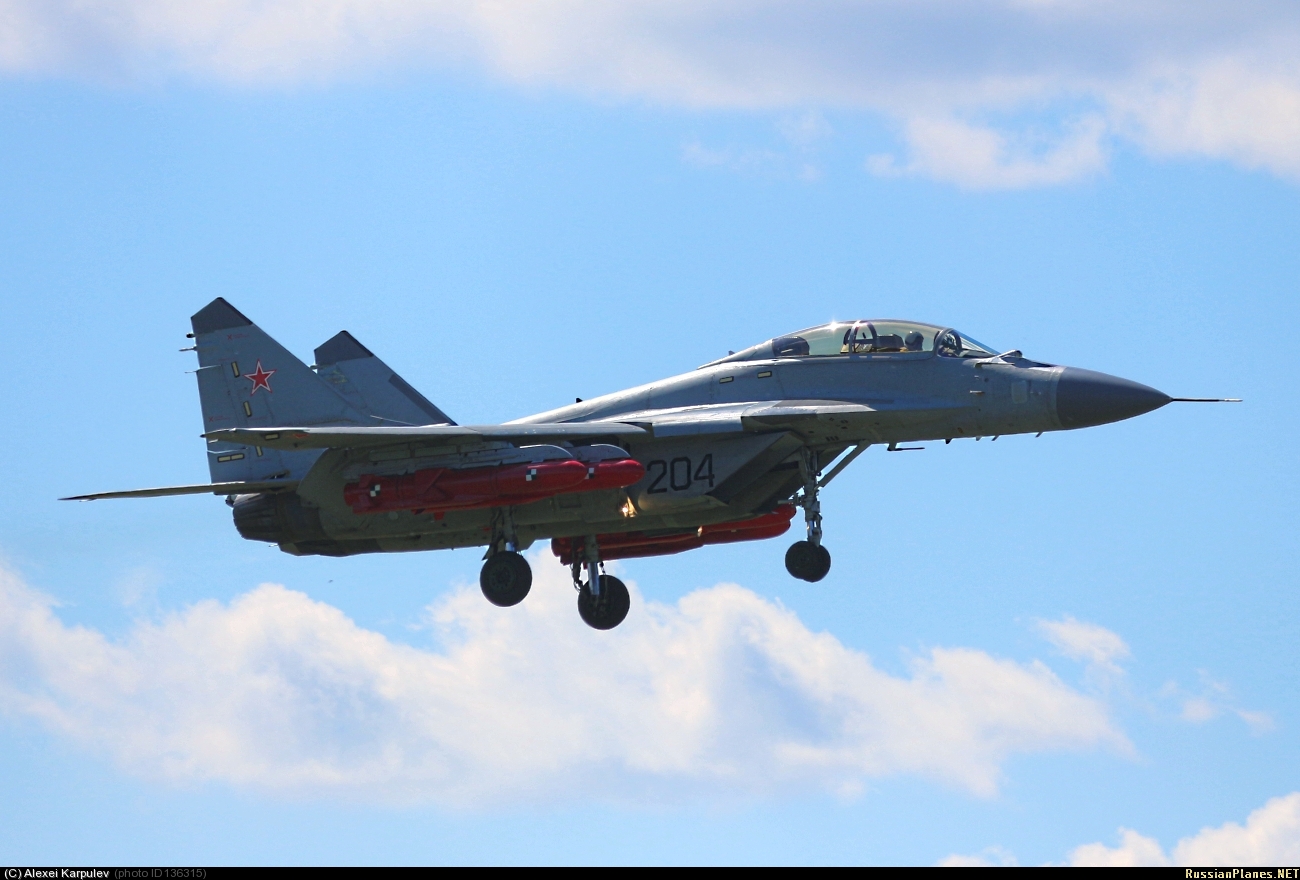 nice... the red colour and black and white markings show it as being a test round... I suspect they will be testing releasing the weapon to ensure clean separation during launch and exploring the launch parameters... ie how fast and high or slow and low it can be released safely.
mack8

Looks like the MiG-29KR/KUBRs for VMF will be numbered starting 50: 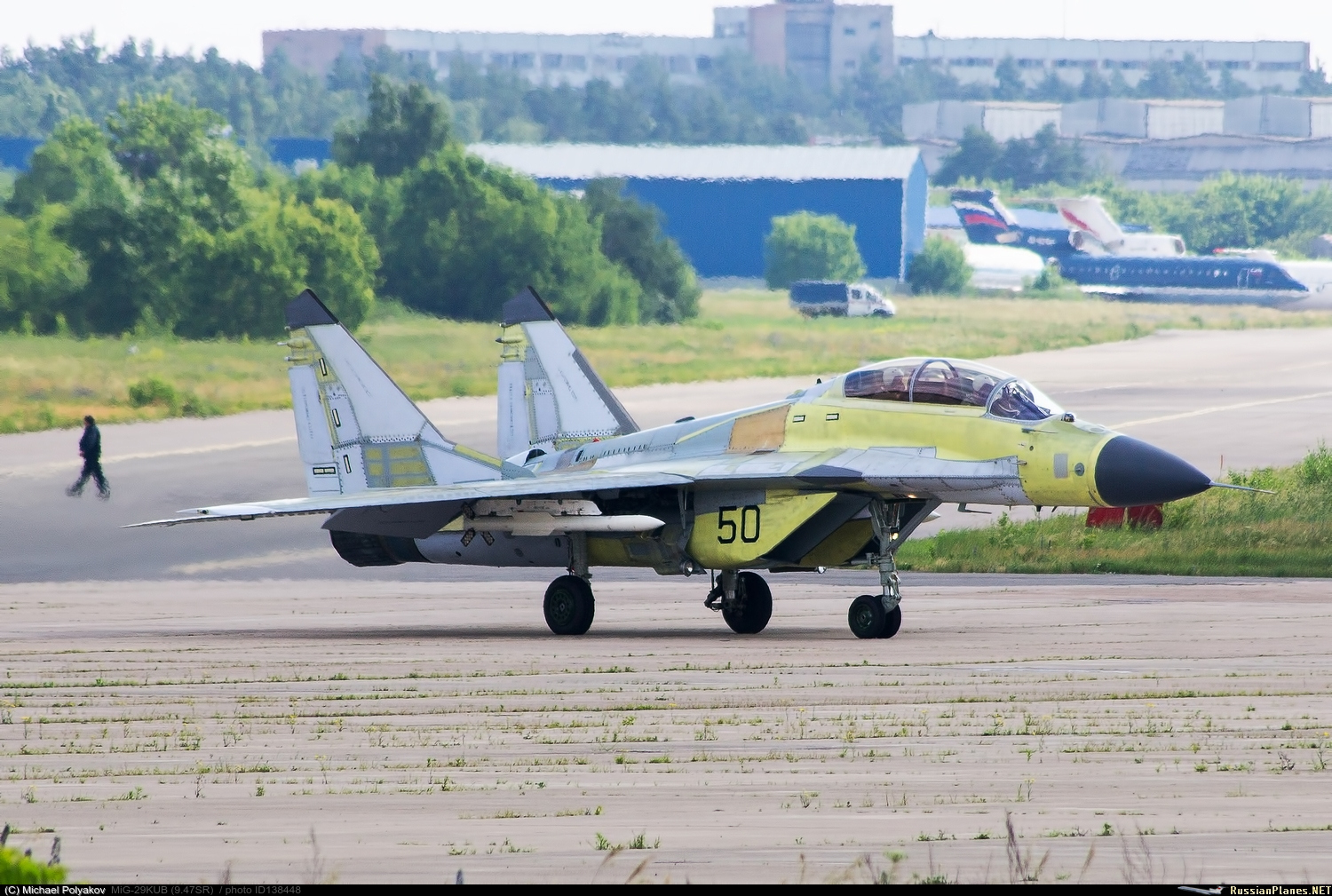 First visible difference between Russian and Indian MiG-28K is, that Russian MiG have new standard Russian RWR sensors (like those on Su-30 and Su-35), while Indian one doesn't have.

Indeed, and also the configuration of the antennas on the spine. 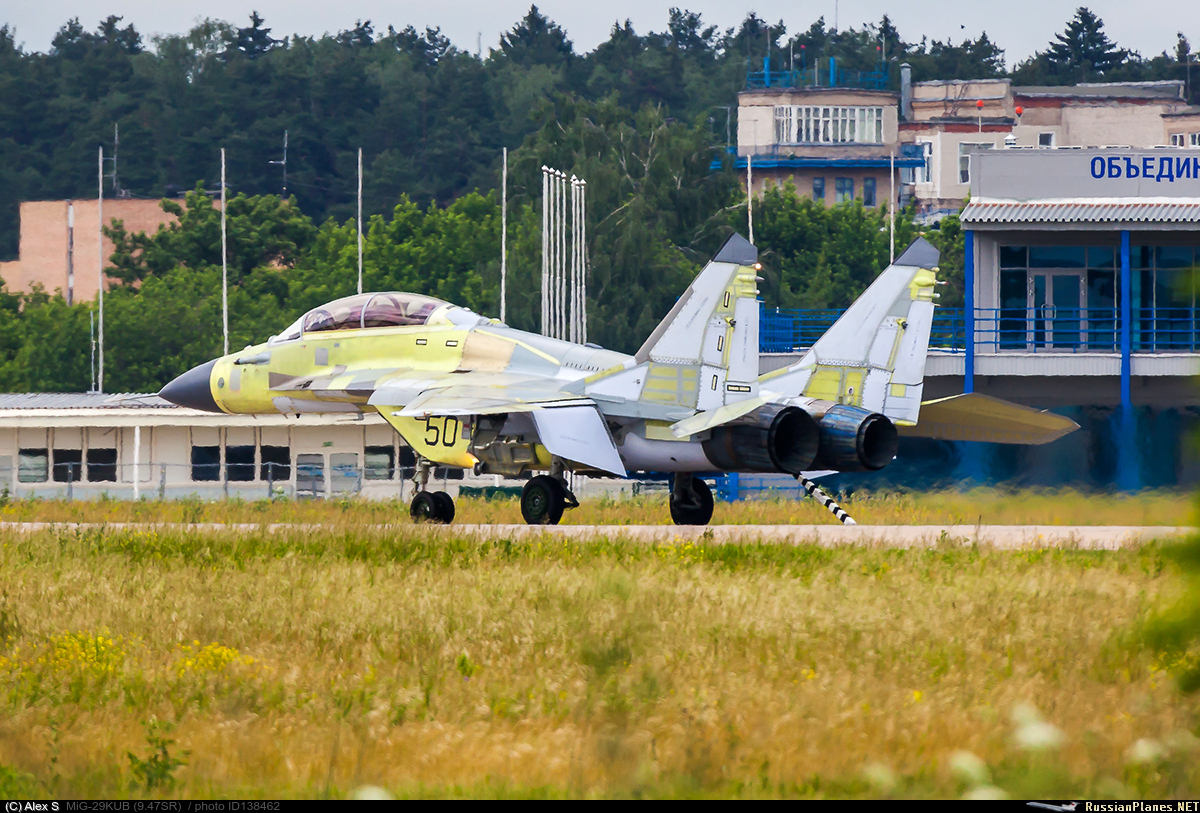 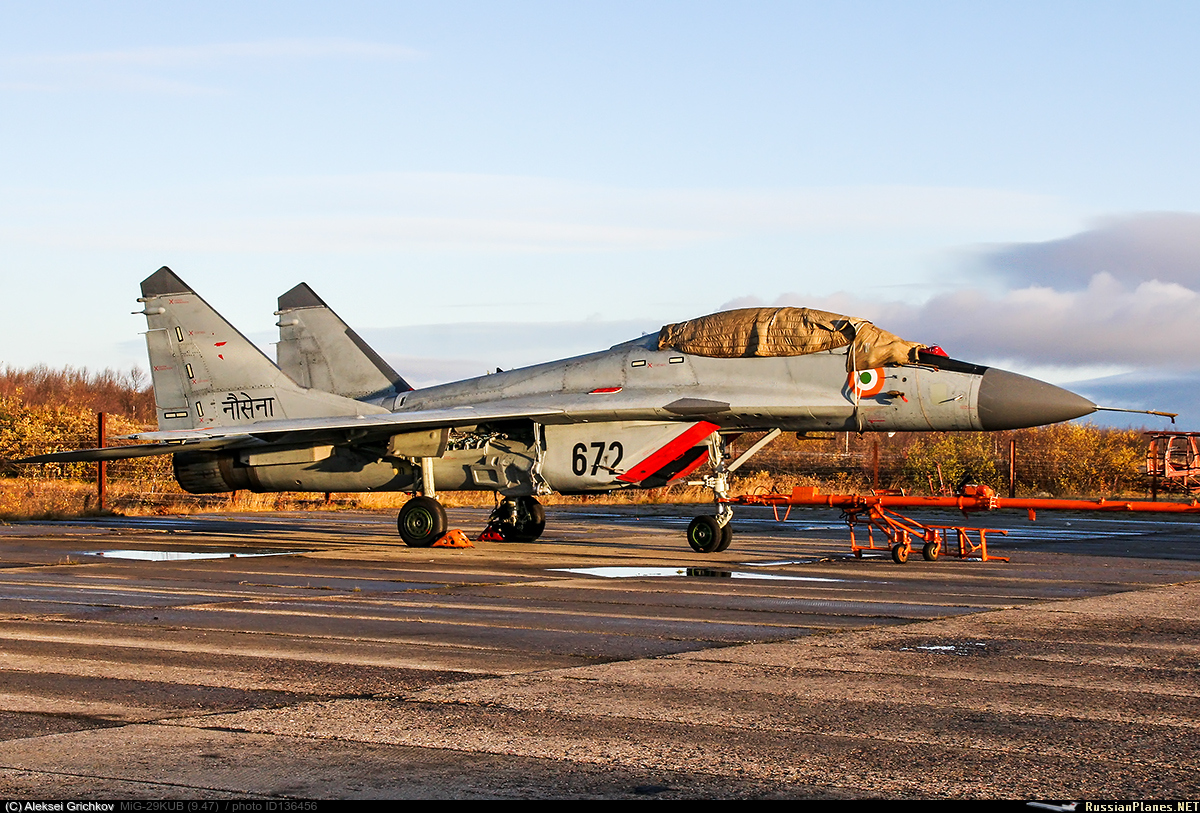 I hope Russian navy will buy additional 24 MiG-29K/KUB for trainings and for rotation on carrier. Rotation of planes will increase their service life.
Flyingdutchman

What would be the standard RUSSIAN air to air load out for the mig-29k, is the russian navy using other missiles then the r-77. R-73?
Flyingdutchman

For the last decade and a half the Russian military has bought very few R-77s, though it has bought the R-73 in enormous numbers and it is a very capable missile.

The only Russian aircraft able to carry the R-77 was the C model MiG-29S. The naval forces largely had ground based Su-27s and Kuznetsov based Su-33s all of which were equipped with a special model R-27 and R-27E missile designed to operate over sea surfaces.

They might also add the R-37M or RVV-BD missile in the longer term as the MiG gets an AESA radar.
Flyingdutchman

And more specifically having a load out of 2 x R-73M2s gives powerful close combat capabilities, while 2 x R-77s give a bit of reach while having a good fire and forget performance, and a couple of R-27ET missiles would allow long range engagement of stealthy targets or low altitude run down shots.

Normally SARH requires a lock and tracking of the target and targets are easier to lock when they are closing targets. The effective range for a lock on a closing target could be 30-40 percent greater than the range for a receding target. This can mean a small fast target like a cruise missile flying very low can be a difficult target because the low altitude reduces AAM performance and the fact that it is receding reduces the range that a SARH missile can achieve a lock.

In comparison a receding target is easier to lock on with a heat seeking missile as the engine exhaust and other hot parts are clearly visible so you could get locks at much longer ranges than you could with a head on engagement.

this all means that a closing target can be hit effectively and efficiently with the R-73 for close range targets and R-77 for targets further away while escaping targets can be engaged with the R-27ET with a good chance of success. The different weapons are complimentary.
Flyingdutchman

Awesome! Thats a awesome weapon load-out for the mig-29k!!
Then my final question: has the r-27 missile ever seen operational deployment on the Kuznetsov?
So were su-33s and mig-29k aircraft ever armed with the r-27 while flying from the kuznetsov?

Never mind, i already found it here you can see a su-33 equiped with a r-27 missile prepared to be launched on the kuznetsov.

Which anti-ship missile will be better suited for Mig-29K? Kh-31AM or Kh-35? Both are in 600 kg class. I would say Kh-31AM would be better as the missile is faster than Kh-35. I think naval Su-30SM should use air launched Club and Onix missiles.
Flyingdutchman

I believe the kh-35 missile has better range but i am not sure.
Sponsored content