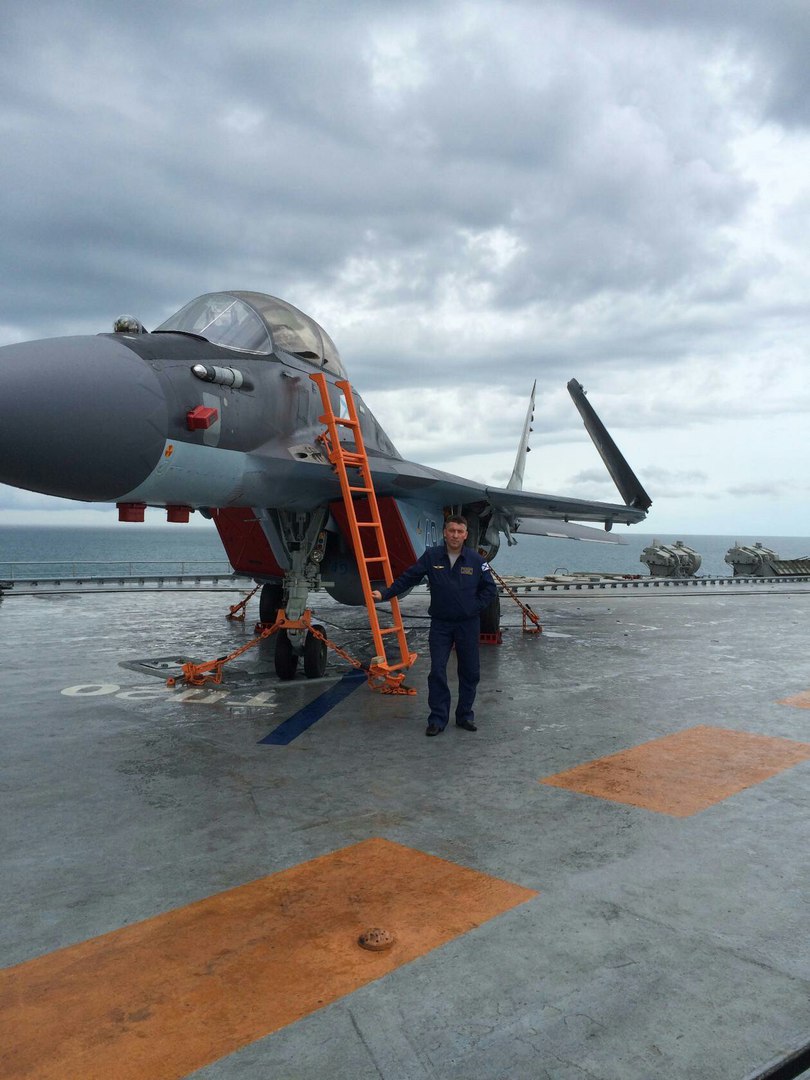 Nice to see MiG-29K fighters on Kuznetsov carrier. I wonder, if they will receive few targeting pods for operation in Syria for testings in real combat conditions?

Loss of MiG-29KR on the "Admiral Kuznetsov" 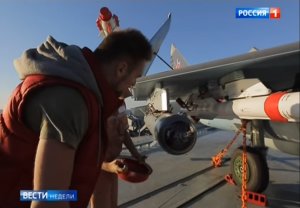 A photograph of a MiG-29K naval fighter (onboard number "41 blue"), crashed at the coastal airfield (Severomorsk-3?), from the 100th separate fighter aviation regiment of the Northern Fleet of the Russian Navy. Earlier this incident was not reported. 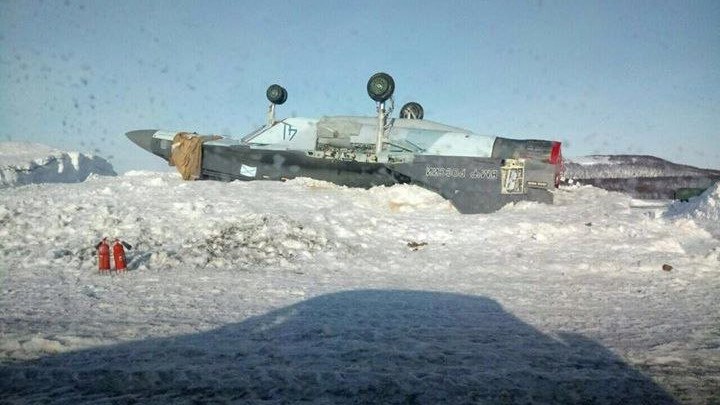 I finally received the official response of RAC MiG to false claims about structural problem of #India's MiG-29Ks
http://www.defensenews.com/land/2017/08/04/indian-navy-wants-russian-mig-29k-jets-to-be-ruggedized/ 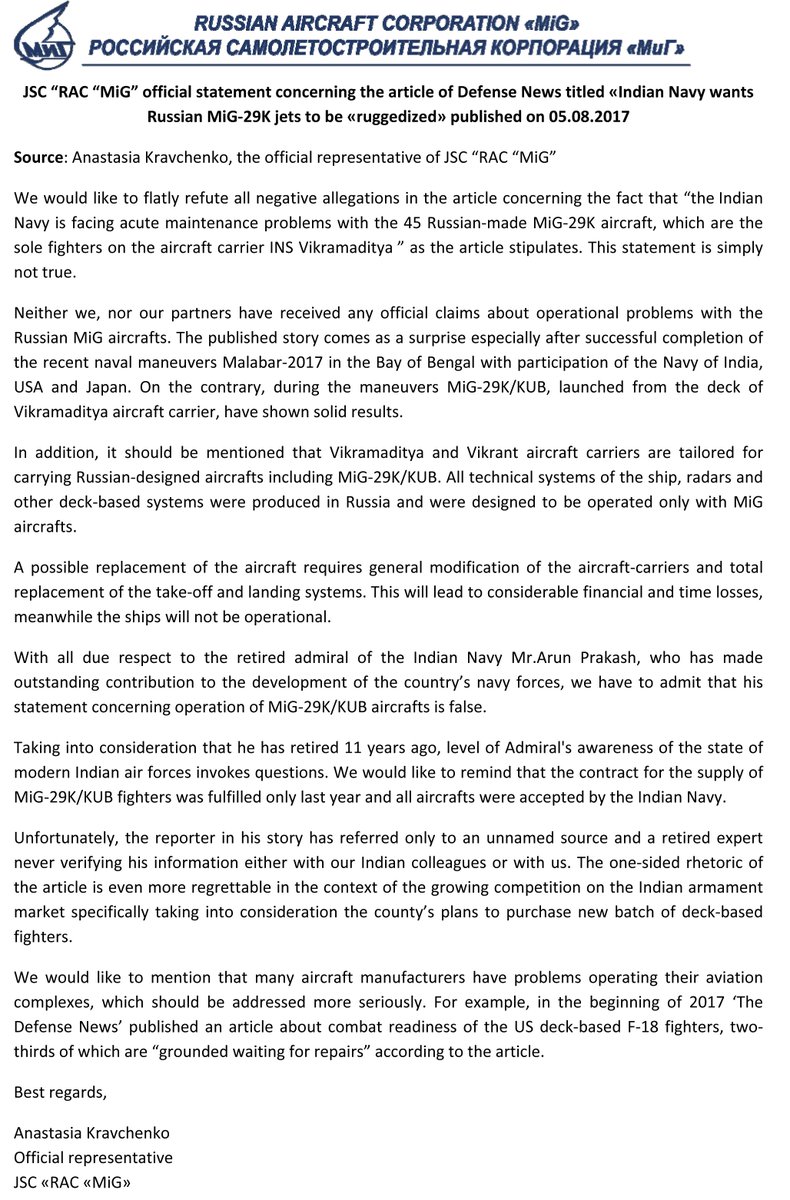 MOSCOW, October 11. /TASS/. The pilots of deck-based MiG-29KR fighter jets for the first time started practicing flights with landings on the deck of an aircraft carrier at the Nitka aviation training range in Crimea, a source in the regional defense circles told TASS on Friday.

"The pilots of the 100th separate shipborne fighter regiment from the Northern Fleet’s naval aviation, which arrived at the Saki aerodrome in late September, are holding intensive training to engage arrester hooks on the ground-based ‘aircraft carrier,’" the source said.

Five MiG-29KR fighters are involved in the training flights, the source added.

The aircraft from both regiments took part in the deployment of the Russian aircraft carrier Admiral Kuznetsov to the Syrian waters, which ended in February 2017.

Russia’s Defense Ministry earlier reported that the personnel of a separate shipborne fighter regiment from the Northern Fleet had redeployed on MiG-29K aircraft to Crimea to practice piloting at the Nitka training range. The pilots’ training on the simulated aircraft carrier will last about a month.

The experimental combat duty increases the zone of controlled airspace over the Northern Sea Route, according to the Northern Fleet’s press office

"The replacement of the flight personnel and MiG-31BM fighters of a seperate composite aviation regiment took place at the Northern Fleet’s Rogachyovo airfield. They were replaced for the first time by pilots of deck-based MiG-29K fighters of the 100th shipborne aviation regiment of the Northern Fleet’s Air Force and Air Defense Army," the press office said in a statement.

The experimental combat duty by pilots of the Northern Fleet’s Air Force and Air Defense Army on the Novaya Zemlya archipelago expands the area of employing the Fleet’s fighter aviation in the Arctic and increases the zone of controlled airspace over the Northern Sea Route, the statement says.

The 100th shipborne aviation regiment is outfitted with generation 4+ MiG-29K fighters. The regiment’s pilots participated in the long-distance deployment of the Northern Fleet’s carrier group in the Mediterranean Sea led by Russia’s heavy aircraft-carrying cruiser Admiral of the Fleet of the Soviet Union Kuznetsov.


The crews of deck-based MiG-29K fighters have gone on experimental combat duty on the Novaya Zemlya archipelago in the Arctic for the first time, the Northern Fleet’s press office reported on March 12.

Russian deck fighters operating in the Arctic... who saw that coming? ....

The Kuznetsov based Su-25s had no weapons or ability to carry weapons, their purpose on the ship was take off and landing training because there was no single seat version of the Su-33.

With the MiG-29KR which can be single or twin seat on board it can be used for take off and landing training of pilots... but also training in other skills like navigation and various roles like interception and light strike, for which the Su-25 really was not suited for.