Satellite imagery captured on 10 July reveals that most of the flight deck has been installed on China's first indigenous aircraft carrier (CV), the Type 001A, which is under construction at Dalian shipyard.

The Airbus Defence and Space image shows that significant progress has been made on the CV's hull since the last time construction was observed in late May 2016. For instance, between 17 May and 10 July most of the starboard and port flight deck overhanging sections were installed. The only significant flight deck component still absent was the bow's ski-jump section.

The rapid installation of significant hull components throughout the Type 001A's construction is due to China's modular construction process.
George1 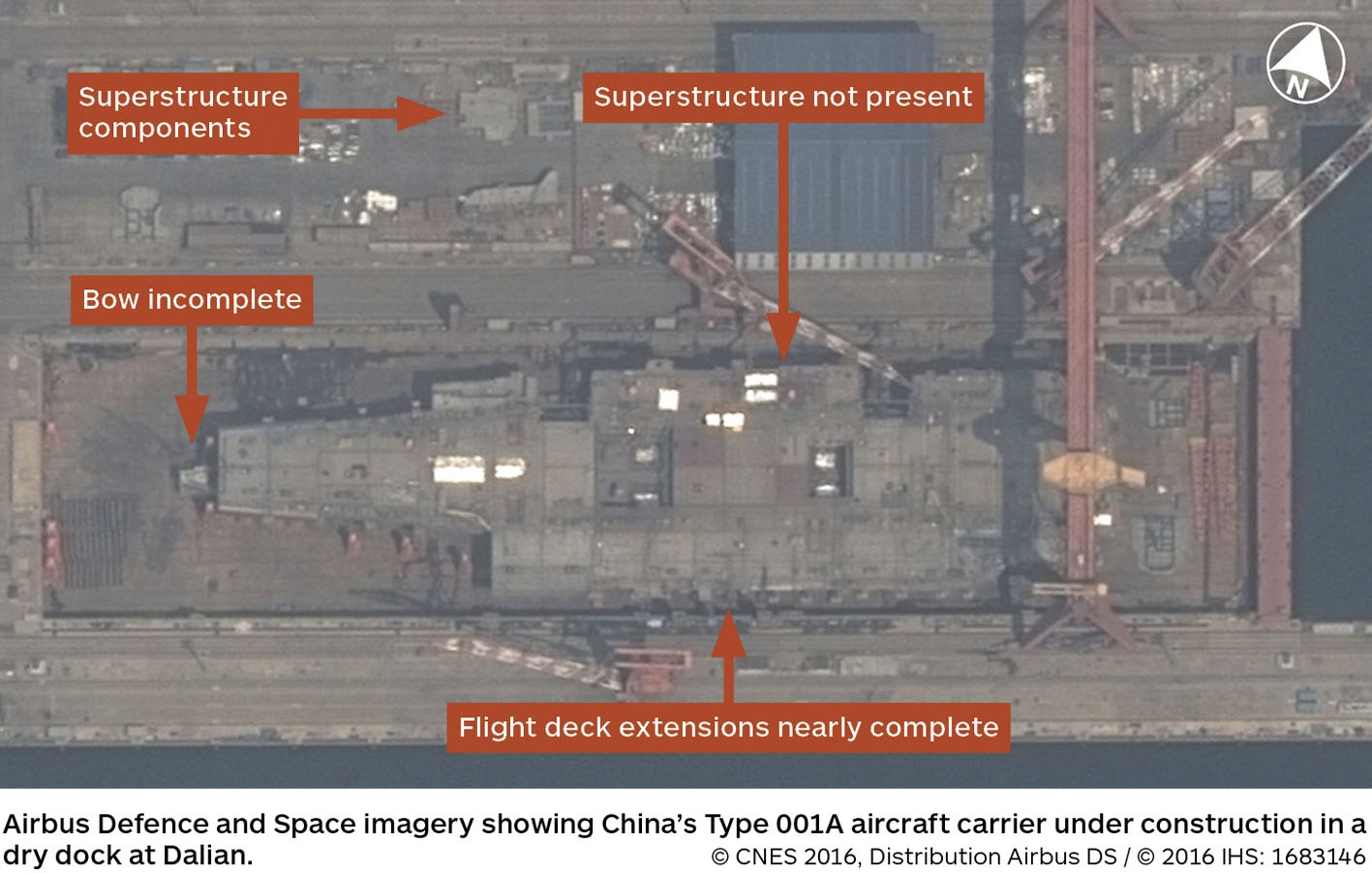 max steel wrote:
Satellite imagery captured on 10 July reveals that most of the flight deck has been installed on China's first indigenous aircraft carrier (CV), the Type 001A, which is under construction at Dalian shipyard.

Wait, is the image in the post above the said image captured on July 10th?
max steel 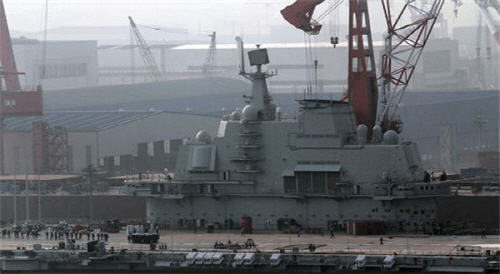 It seems that China is ready to launch its first indigenous aircraft carrier (CV), the Type 001A, by the end of the year. As a result, China, which operates a rehabilitated ex-Soviet aircraft carrier, is expected to become a full-fledged aircraft carrier operating country soon. Furthermore, it’s certain that the country will continue to bring more domestic aircraft carriers into service to turn itself into an aircraft carrier superpower.

Such observation is not an exaggeration considering the recent images and videos of the Type 001A, which shows that it is almost complete in outward appearance. In fact, some of the state-owned media outlets claimed Sunday that the 001A is at the final stage of construction, added that the era of domestic aircraft carrier is here.

The fact that China is constructing a domestic aircraft carrier is not a surprise. In a news conference at the end of last year, China’s defense ministry spokesperson Yang Yujun announced that its navy is building China’s second, but the first indigenously-built aircraft carrier in Dalian shipyard. Furthermore, it has been also revealed in mid-June that the installation of the ship’s ski jump, one of the major parts, has begun.

However, it’s a quite different story, considering the fact that the Type 001A is China’s first domestically built carrier. For instance, the United States, who once looked down on China’s technology before, is now keeping an eye on the carrier’s construction process.

Moreover, China’s second locally designed and built aircraft carrier is under construction in secret in a shipyard near Shanghai. The Chinese Navy’s plan of deploying 6 aircraft carriers including 2 nuclear-powered ones by 2025 is not an empty boast.

At present, the Chin’s military strength falls far behind those of the United States, its potential enemy. However, the gap will be narrowed down significantly if China’s indigenous aircraft carriers begin to enter service. This is why the U.S. is keeping an eye on China’s recent action.
George1

As tensions mount in the South China Sea, the country’s state television has heralded the Liaoning aircraft carrier’s expanded lethality.

Last week, Chinese TV boasted about the "growing combat capabilities" of its Liaoning (CV-16) aircraft carrier, noting that the battle platform can carry up to 20 fighter jets, bolstering Beijing’s balance of naval and aviation power in the Pacific rim amid growing tensions.

Last Monday’s footage revealed the Liaoning carrying eight Shenyang Aircraft Corporation (SAC) J-15 fighters, along with a Z-18 and a Z-9 helicopter, the largest number of aircraft yet seen on the carrier, suggestive of plans by China to build up its aerial presence in the Pacific Ocean.

Speaking about the J-15 fighter jets during an August 4 program, Chinese Rear Admiral Yin Zhou said, "Once all eight aircraft fly out in formation, they have a strong combat capability." He noted that the Liaoning can carry up to 20 aircraft, prompting Chinese media to further comment that the carrier exhibits "growing combat capability."

The presence of Z-18J airborne early warning (AEW) and Z-18F anti-submarine (ASW) helicopters, never before seen alongside the J-15 on the Liaoning carrier, represents a significant development in China’s joint aviation and naval capabilities, likely forming a full air-wing for the carrier.

Topping out at a speed of 1,585 mph (2551 kmh), the J-15 possesses semi-stealth capabilities, with China boasting that it is a fifth-generation weapon, with a range of 2,175 miles, providing the aircraft both the capabilities of an intercept fighter and a traditional combat warplane. Joined with the Z-18J and Z-18F helicopters, Beijing’s airpower in the Pacific is considered by some to be unrivaled.

The increased capacity of the Liaoning is substantial in the wake of a growing Chinese military presence, in response to not only the Hague arbitrational court’s ruling contrary to Beijing’s territorial claims in the South China Sea, but also demands by regional and Western governments that the administration of Xi Jinping simply rescind areas they have long held.

China has flatly stated that the Hague court has no jurisdiction in the case. Beijing also feels increasingly cornered by the Obama Administration’s "Asian pivot" and the acceptance by the South Korean regime of the deployment of the THAAD anti-missile system which China fears will lead to weapons proliferation in the region.

Beijing has told its people to prepare for war, and the state-run People’s Daily urged the regime to undertake a violent assault on Australia, for their position on the South China Sea dispute. The increased combat capabilities of the Liaoning show that if China chooses to fight, it has the technical capability to dominate on a battlefield.

Construction of the second Chinese carrier in Dalian. 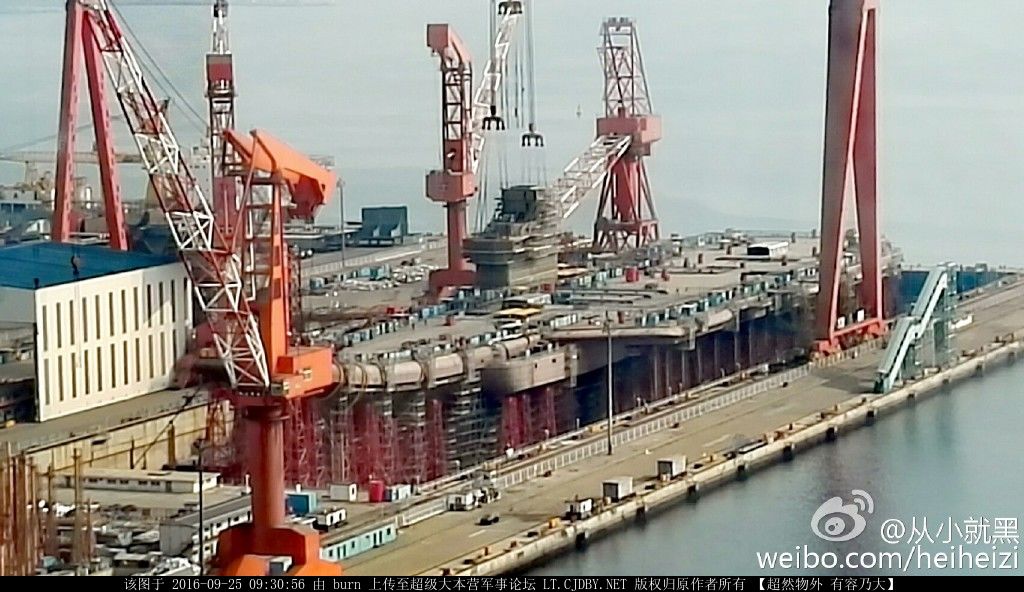 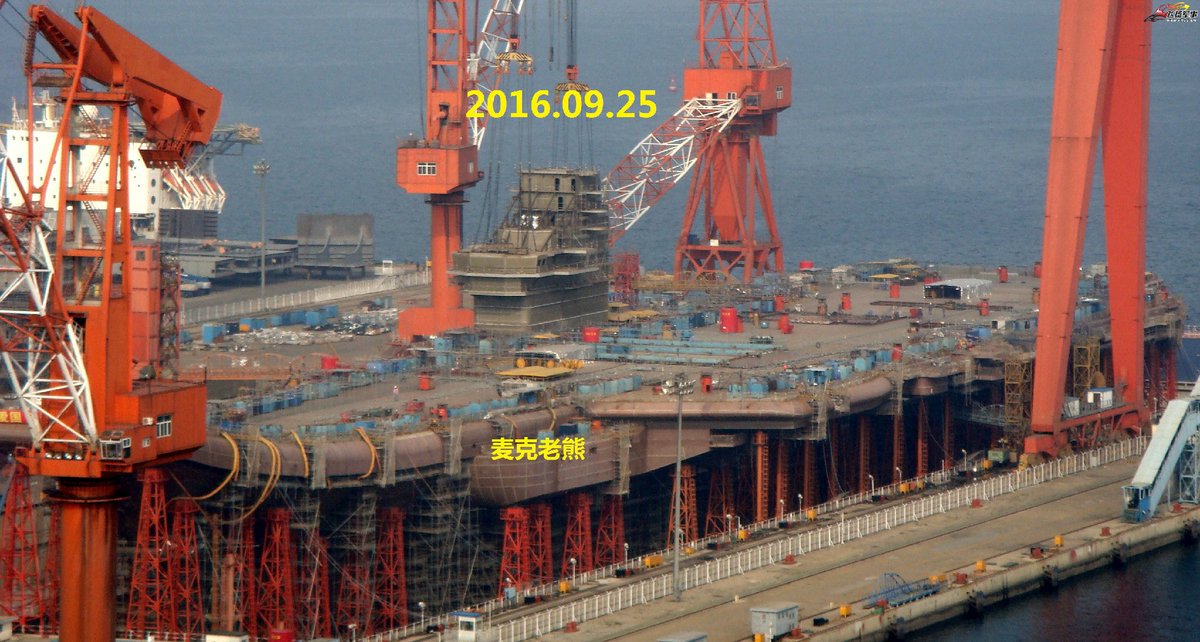 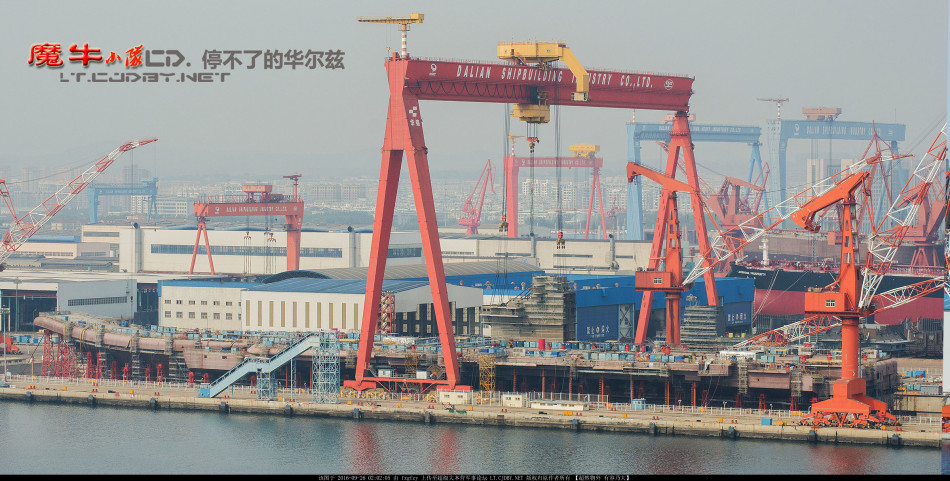 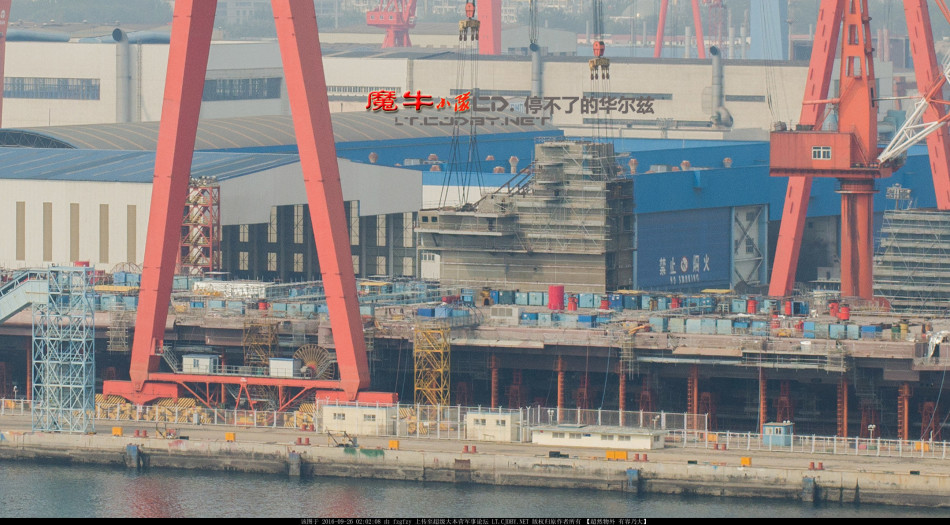 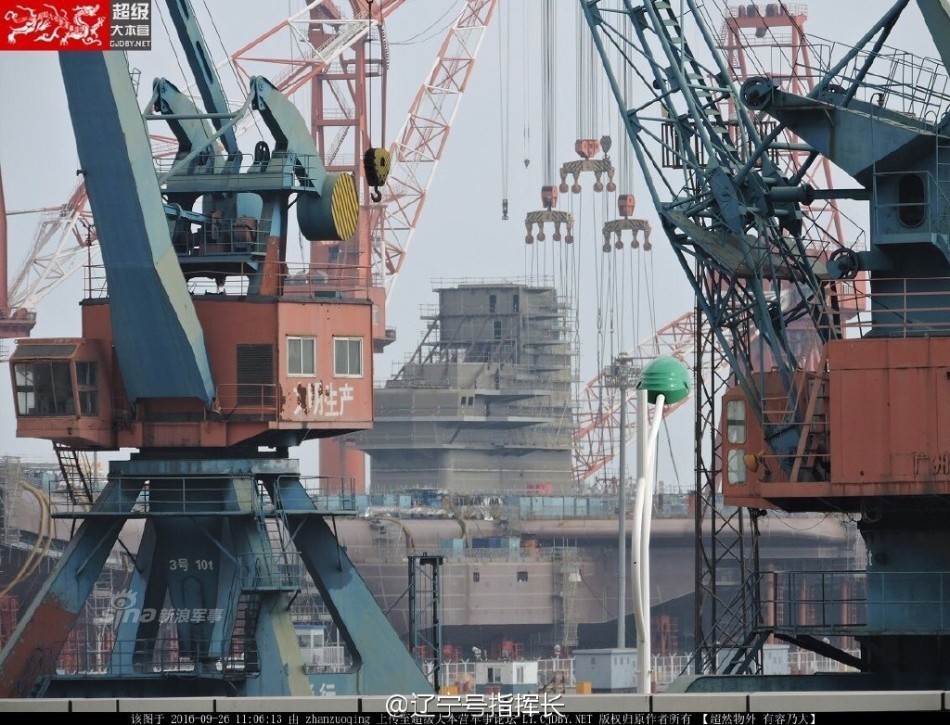 China state media reported Tuesday that the country’s first aircraft carrier is prepared for combat, as the People’s Liberation Army Navy (PLAN) looks to bolster its presence in the region and abroad.

Chinese media has revealed that the new Chinese aircraft carrier will be able to dock 36 Jian-15 fighters [J-15].

According to Chinese news portal Sina, “At the moment, the aircraft carrier being prepared for launch is optimized in terms of load which compared to the Liaoning aircraft carrier can reach from 28 to 36 units of J-15 fighters.”

Currently, the Chinese Navy arsenal consists of the Liaoning aircraft carrier, created on the basis of the Soviet cruiser Varyag. Liaoning can base 24 J-15 fighters.

Earlier, Chinese media reported that the new aircraft carrier could be launched in late April 2017.

According to some experts, the likely date is April 23 which is the anniversary date of the founding of the PLA Navy.

The official representative of the Defense Ministry of the People's Republic of China, Wu Qian, said that the aircraft carrier, whose construction the country is conducting independently, is in its final stage.

However, he did not confirm the statements made by the Chinese media regarding the exact launch date of the aircraft carrier.

Liaoning is a Type 001 class vessel. The first carrier was rebuilt out of the Soviet aircraft cruiser Varyag in early 2000s, with the first sea trial taking place in 2011. In September 2012, Liaoning was commissioned into the PLA Navy.

In late December 2015, the Chinese Defense Ministry announced plans to construct a new Liaoning aircraft carrier built by China itself.

The carrier, however, is not expected to fully enter service until 2020, as it will reportedly take years to install all the equipment and conduct the necessary tests and trials.

The launch of the new vessel which has been referred to as CV-17 comes amid renewed tensions between North Korea and the United States in the region amid Pyongyang’s nuclear and missile programs.

Photos of the new vessel indicate that the ship has a ski jump and angled flight deck. Earlier reports also suggested that the ship’s hangars were built large enough to accommodate between 28 to 36 aircraft onboard.

Pictures on Chinese social media of battleship parts have led to frenzied discussion as to whether China’s Type 002 aircraft carrier is underway ahead of schedule, but analysts say the engineering chops for the ship simply aren’t there yet.

The images fueling the speculation may be part of a warship, but they aren’t part of China’s next carrier, a source told the South China Morning Post. “The [Jiangnang] shipyard is empty. It’s impossible to hide such a huge ship,” the official said.

On April 26, the People’s Liberation Army Navy (PLA-N) sent the yet-unnamed Type 001A carrier sailing on the high seas. Beijing’s first homemade carrier will join PLA-N’s Liaoning in 2020, the Center for Strategic and International Studies estimates.

But before the Type 002 can be finished, Beijing has to finalize the blueprints of the steam catapults that are needed to help jets take off from short runways, as well as plans for the huge ship’s power source, the SCMP report said.

Another point of debate for designers of the Type 002 is whether to power the ship with nuclear reactors, which would be a major technical marvel if accomplished. Steam turbines and diesel generators propel the Liaoning and Type 001A.

Washington’s Nimitz-class supercarriers and the next generation of Ford-class carriers feature nuclear propulsion systems. The US Navy has been testing out a controversial electromagnetic launch platform for its future carrier fleet.

But US President Donald trump condemned the technology as "no good," urging naval planners to stick with steam. A slew of technical miscues has put the USS Gerald Ford well behind schedule and nearly 20 percent over budget.

According to Chinese sources, the developer and builder of Soviet aircraft carriers Valery Babich arrived in China and will now work at the Special Shipbuilding Research Institute in Qingdao. 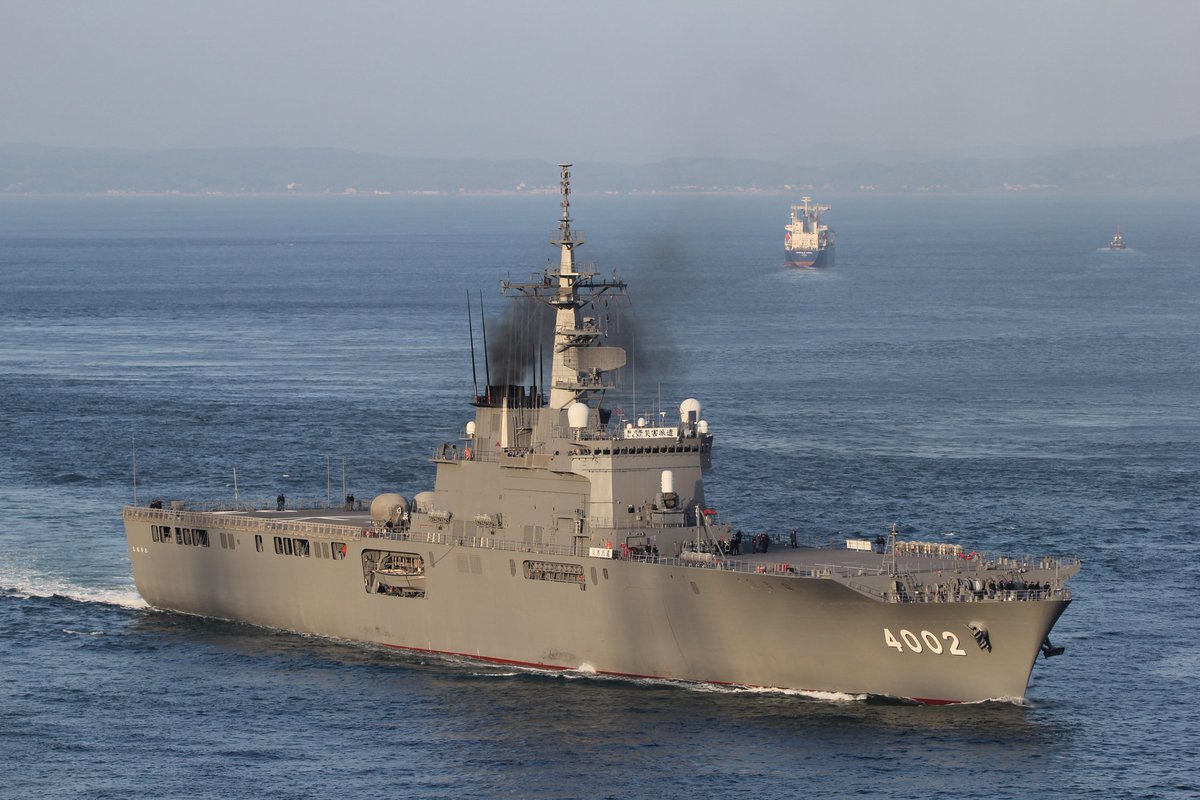 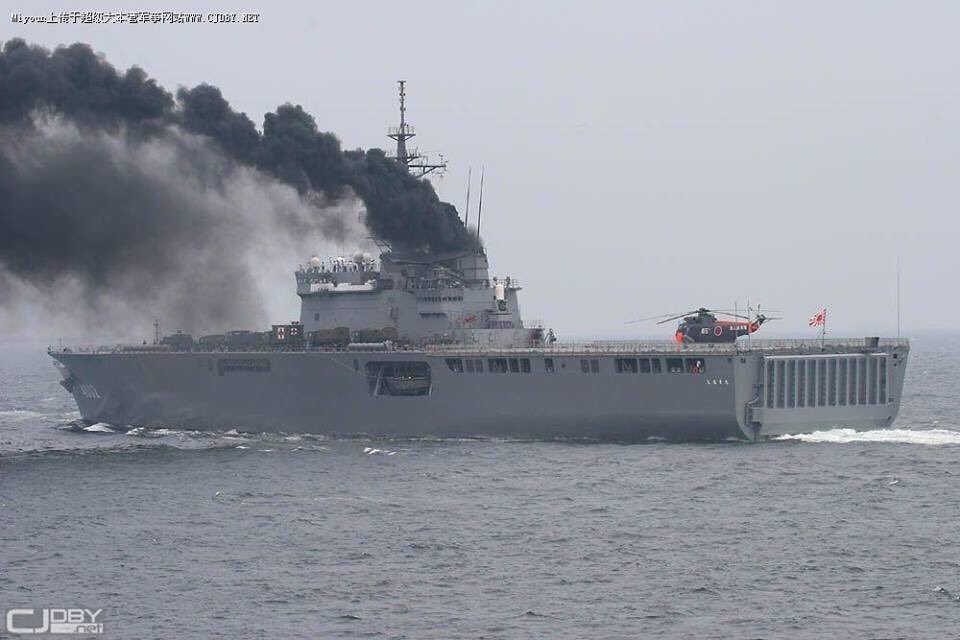 The second Chinese aircraft carrier in the sea 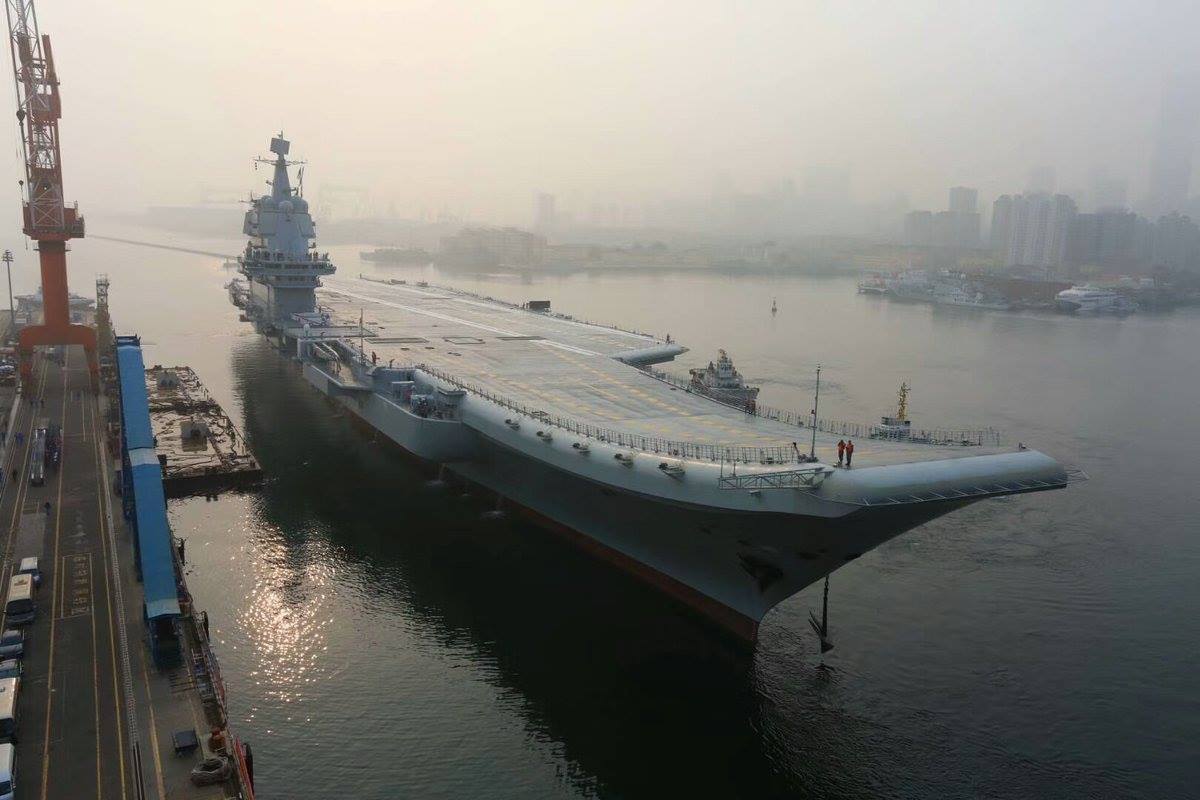 The first exit at sea to the factory running tests of the second Chinese aircraft carrier. Dalian, 05.13.2018 (c) Xinhua

Recall that the first aircraft carrier of the PLA Navy was Liaoning (designated as Project 001) - the former Soviet Varyag of Project 11436, acquired in an unfinished form in Ukraine in 1998 and commissioned by the PLA Navy on September 25, 2012 after completion on the same Dalian Shipbuilding Industry Company

The first aircraft carrier of Chinese construction at factory trials

Chinas two carriers together for the first time.

Recalls memories from the past doesnt it?
walle83

Chinas second aircraft carrier the type-001A is out of drydock again and is continuing to be fitted-out.

The 001A went to sea today. Starting its second sets of trails,

Photos of the newest Chinese aircraft carrier Type 001A 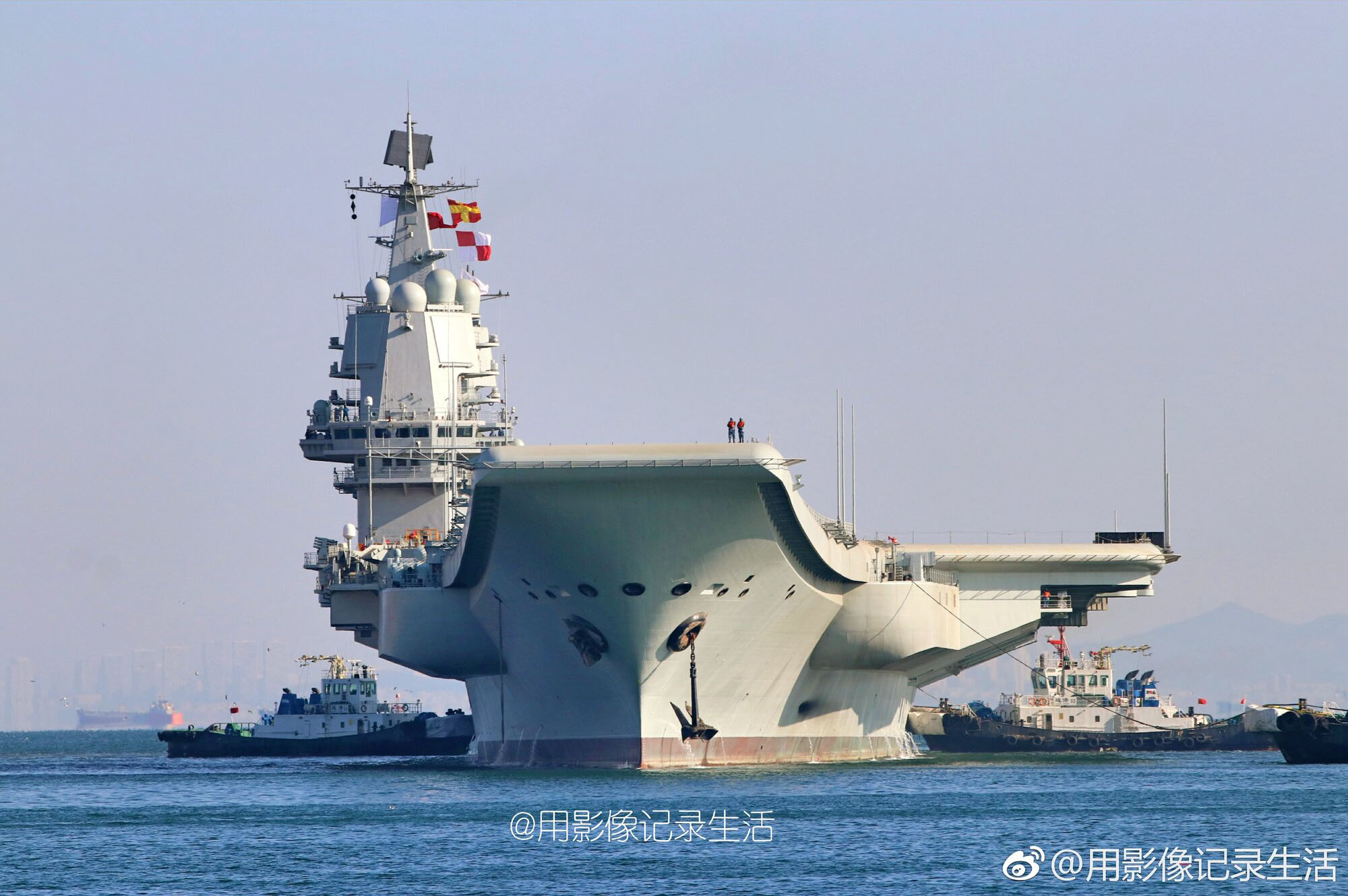 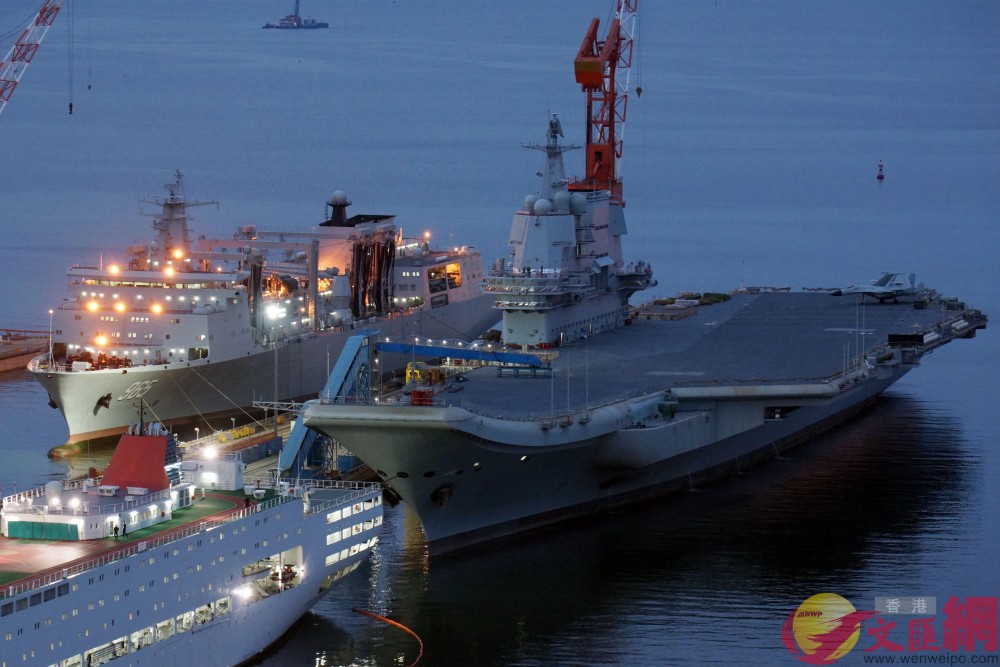 On April 28, 2019, the oceanic integrated supply ship Hulunhu / 呼伦湖 (tail number "965") PLA Navy arrived at the Dalian shipyard and embarked on dry dock next to the aircraft carrier Type 001A.

Hulunhu was built in Guangzhou at the Guangzhou Shipyard International Company Shipyard of the Guangzhou Shipbuiding Company, China Shipbuilding State Corporation (CSSC), where it was launched on December 15, 2015 and accepted into the PLA Navy in September 2017.

The ship is designed to replenish stocks of aircraft carrier groups and other types of warships on the high seas. It is the world's largest ship of this destination, with a total displacement of 55 thousand tons, the greatest length of 239.5 m and a width of 30.5 m.

Under the cut "fresh" photos of the newest Chinese aircraft carrier Type 001A from April 26, 2019. 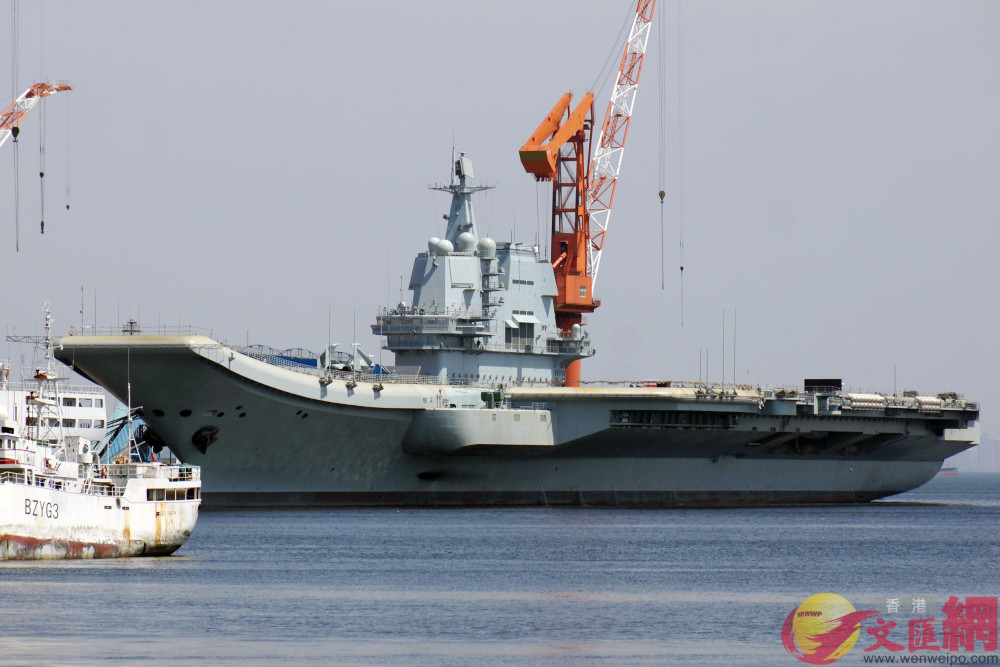 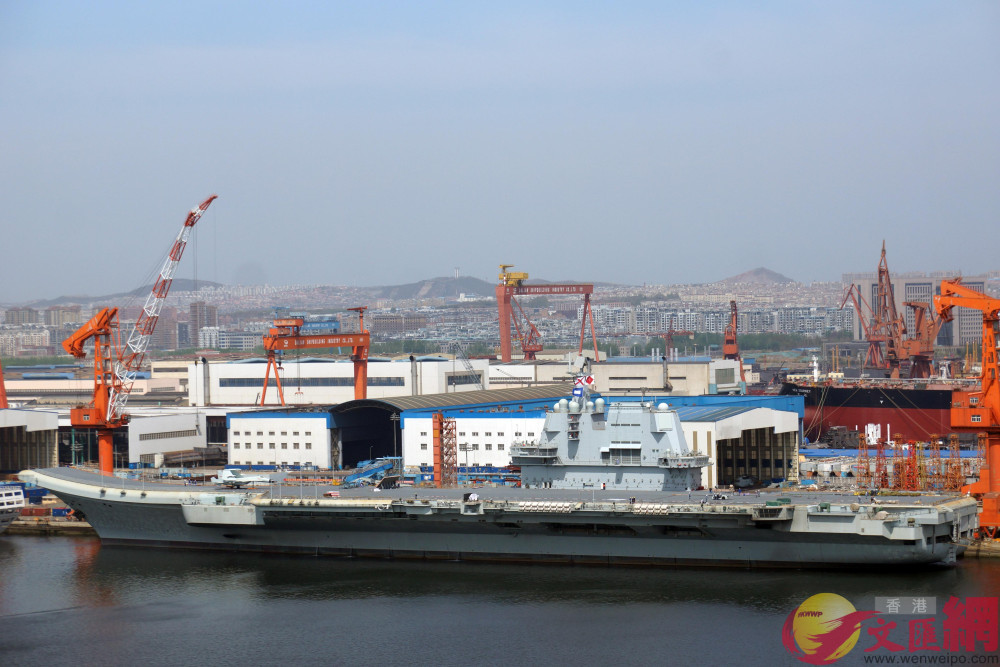 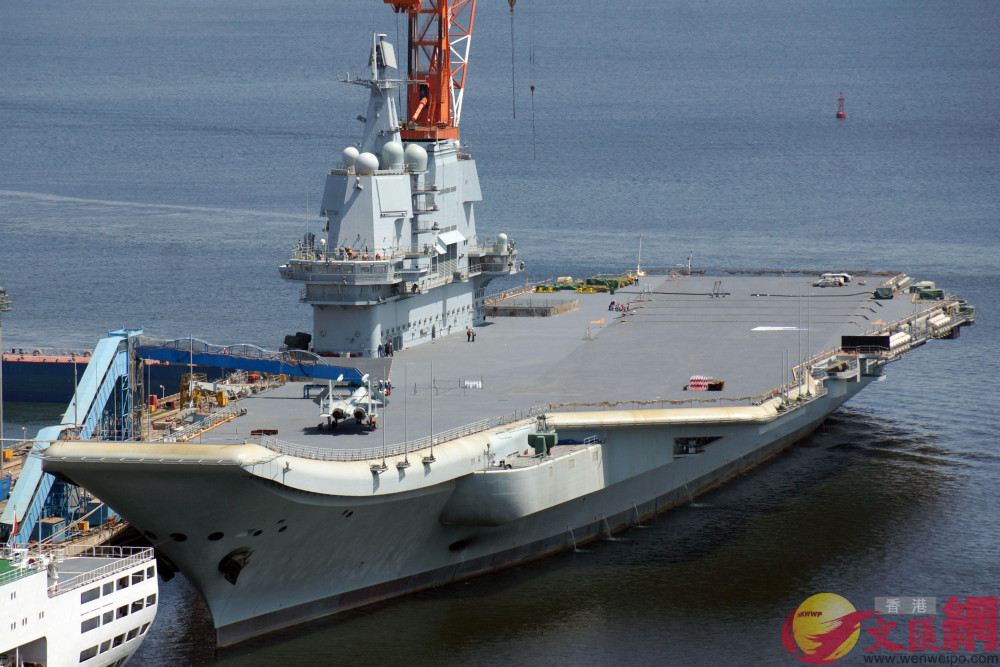 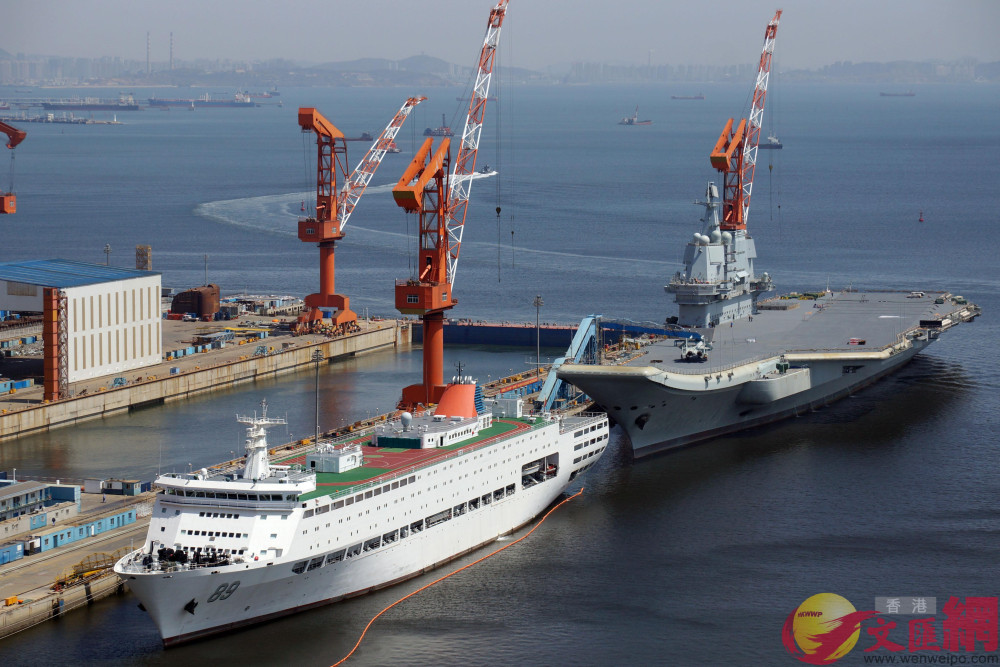