You are not connected. Please login or register
+4
BlackArrow
GarryB
Giulio
Viktor
8 posters

Excellent Russian documentary about performance of airdefense systems in Vietnam.

Day of Defense - February 20, 1975 was established a national holiday - Day of the Defense Forces. "Defense Day" is celebrated every year in Russia, on the second Sunday of April 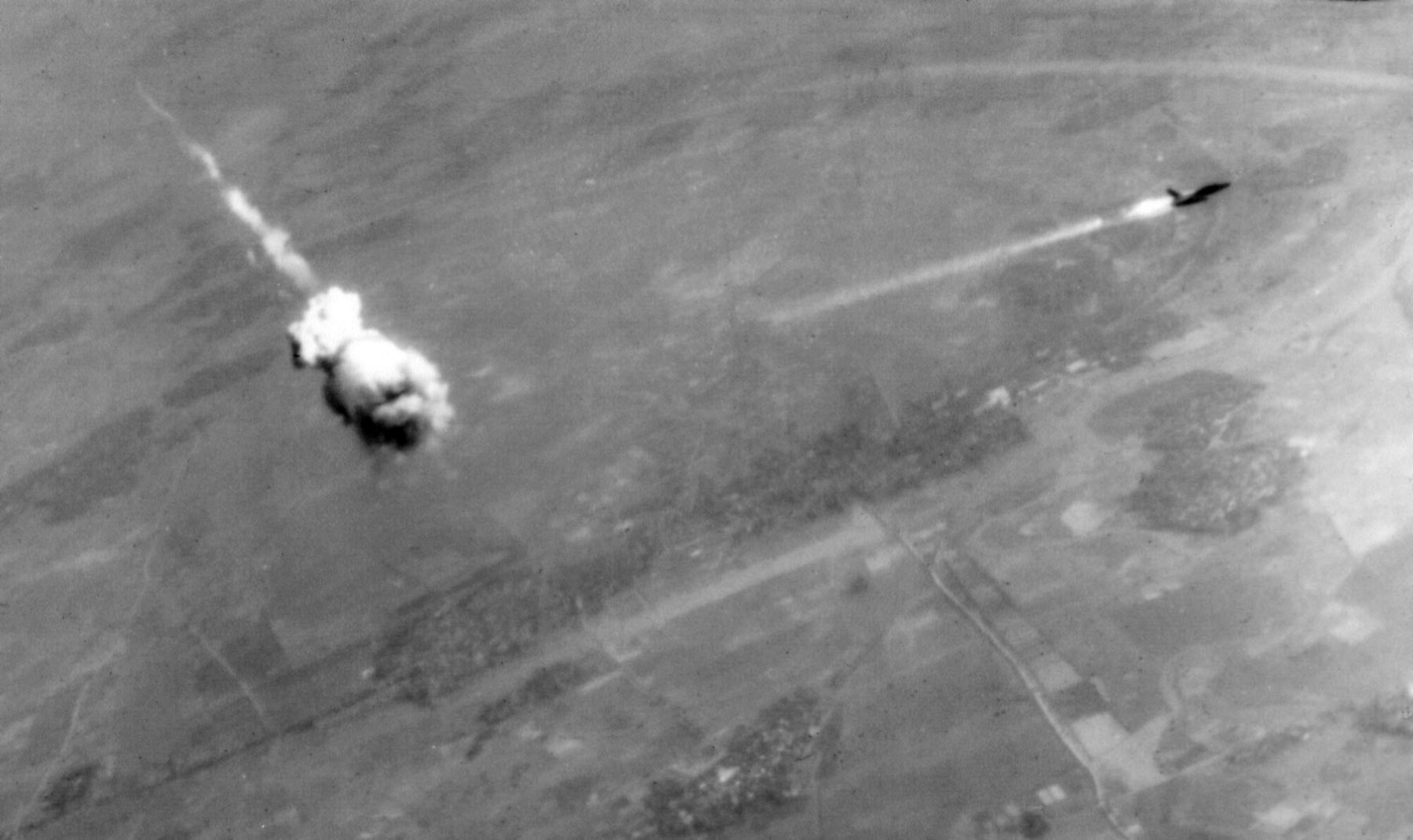 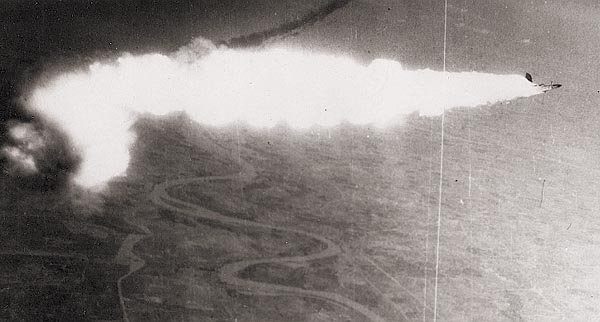 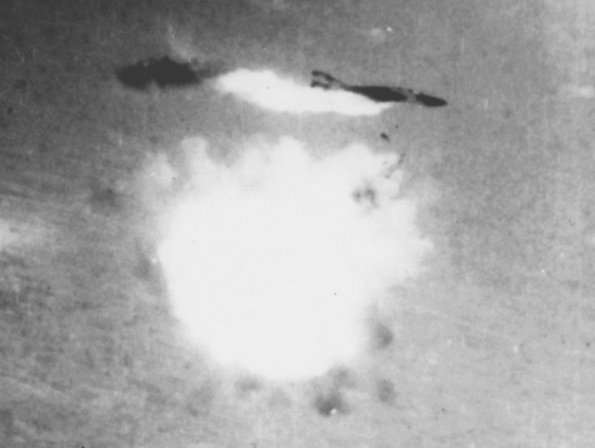 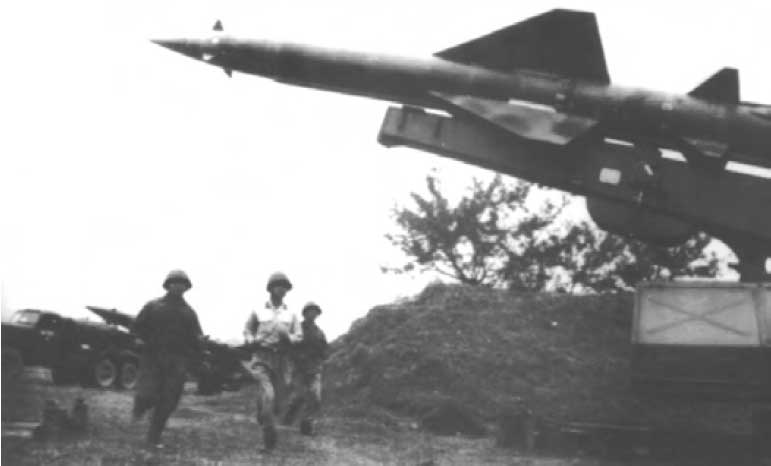 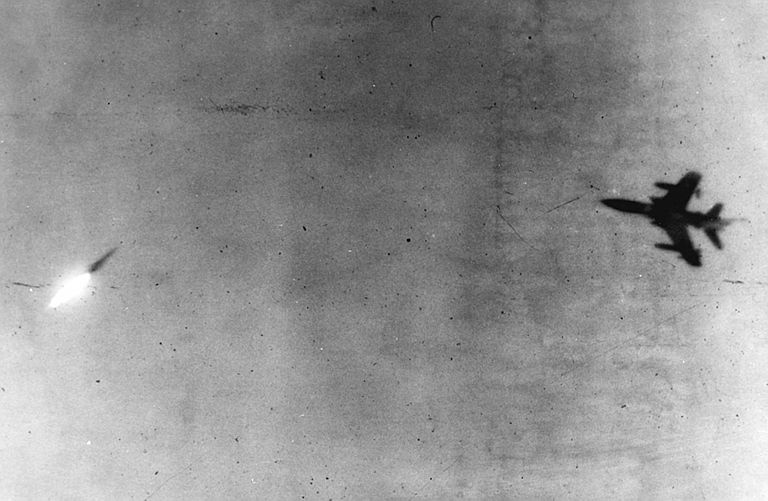 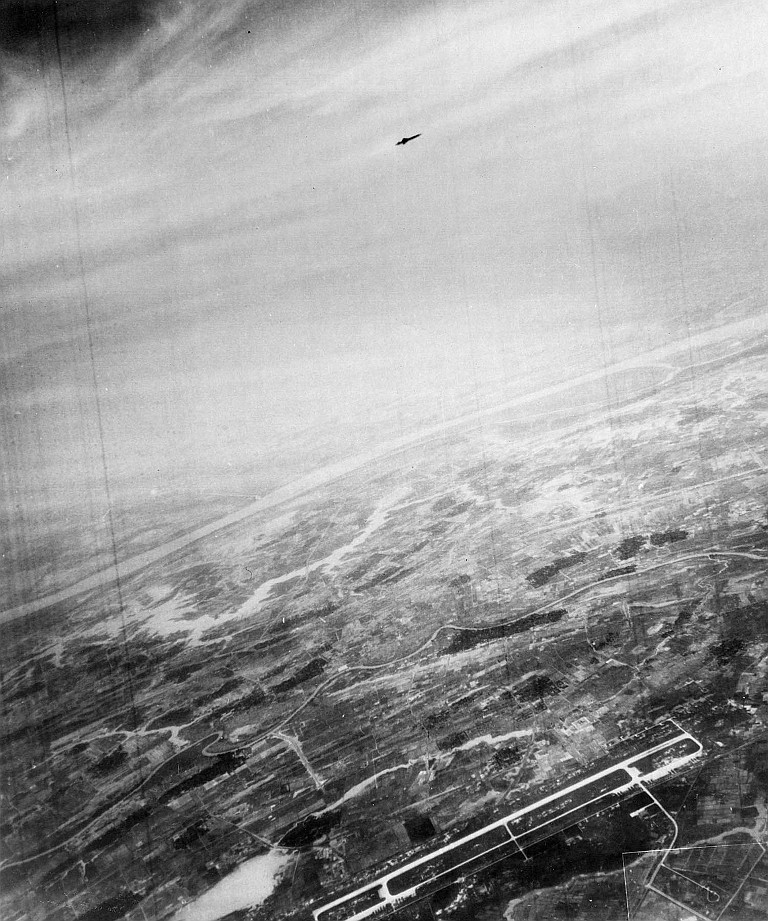 During the war Russian PVO missile troops shoot down 1300 US aircrafts including 54 B-52 bombers.

In the second picture from the bottom there is an F-105 (it seems to me an F-105D). The SA-2 looks small because the missile lost its first stage shortly after the launch.
The F-100 (the "Hun") and the F-105 (the "Thud") weren't suitable for the "wild weasel": being a big supersonic fighter the F-100 and a very big supersonic tactical nuclear bomber the F-105.
Only the proper training and courage saved many pilots. The losses of the F-105s in the Vietnam war (afaik) were about 50% of the aircrafts.
The things improved only with the electronics and the two-seater F-105G, with AGM-45 and AGM-78 and then the F-4E.
The SAMs defenses of the North Vietnam (afaik) were primarily against B-52 raids. The "wild-weasel" missions (USAF) and the "iron-hand" missions of the US Navy served to protect the bombers.
The US Navy was in a better condition than the USAF, because the Navy had teh A-4 Skyhawk, and then the A-6 Intruder, day and night, all-weather bomber.
Afaik the first "wild weasel" mission (or SEAD) in South East Asia took place in Laos, on june 9 1964, when an F-100D destroyed with Mk-82R "snake eye" and its cannons some AAA positions in the Plain of Jars , protecting a rescue mission for a downed RF-8 pilots.
The bigger limit of the F-100 and of the F-105 was the endurance: this required some in flight refueling for reach the North Vietnam (afaik, the F-100 was never used on the North Vietnam).
In addition, the U.S. had to share their attack plans with the South Vietnamese Forces: absurd! Because many men in South Vietnam were in the service of the North.
In conclusion, an absurd war, for incomprehensible reasons, with an incredible foolish treatment of veterans when they return back home.
GarryB

The US Navy was in a better condition than the USAF, because the Navy had teh A-4 Skyhawk, and then the A-6 Intruder, day and night, all-weather bomber.

The USAF did catch up and overtake the navy... thanks to the navy.

The F-111 was originally designed as a carrier based super fighter interceptor but was found to be much too heavy for the role.

The result for the Air Force was a long range strike aircraft with a small fault in the tail design that cost a few planes and pilots but ended up being an excellent strike aircraft, while for the Navy the radar and missiles developed for the F-111 eventually saw service in the F-14.
Giulio

Yes, but the F-111 was an interdiction fighter. The news were the all-weather, low level, terrain following capability and the long range capability, that allowed to reach the North Vietnam without in flight refueling. But the F-111 wasn't for the wild weasel missions. So, for both F-111s and wild weasels needed ECM aircrafts like the EB-66, or EA-6A.
The greater weight of the wild weasel missions during all the aerial offensive over the years in the Vietnam war fell on the F-105 and A-6 crews.
At least three wings of F-105D were deployed to Thailand with their squadrons: the 355° TFW based at Takhli (tail codes JE, RE, RK, RM, RU), the 23° TFW (tail codes MD, ME, MF MG), and the famous 388° TFW (codes JB, JE, JJ, JV, WW and ZB), with their famous "shark mouths" on the nose, in Korat.
The F-105G faced the most powerful and lethal combination of anti-aircraft defenses of the History. An F-105G pilot, a poker fan, calculated that it was impossible not to be downed at least once, going beyond the seventy-fifth mission over the North Vietnam.
BlackArrow

During the war Russian PVO missile troops shoot down 1300 US aircrafts including 54 B-52 bombers.

Russian troops did not shoot down 1300 US aircraft. The overwhelming majority were shot down by Vietnamese nationals. You need to retranslate that man's blog.
nemrod

During the Vietnam war, the SA-2 Guideline  successfully downed 1.500 US air aircrafts.

Here is an interresting point of view of soviet responsibles about Linebacker II. It shows how NVA managed to downed nearly 90 US aircrafts above the sky the Vietnam, how it was an incredible US disaster regarding either political, geostrategical, and military goals.
It shows how heroic was the people of Vietnam, how heroic the help of soviet, and chinese advisors. Anyway, I suspect many soviet pilots had participated to destroy several US fighters. Moreover, many soviet advisors were behind SAM batteires. No wonder, how they were efficient.
Moreover U can notice that the KGB evaluated that for 8 sam shoot, one B-52 downed.


1
PATTERNS AND PREDICTABILITY: THE SOVIET EVALUATION OF OPERATION LINEBACKER II
by
Dana Drenkowski and Lester W. Grau
The opinions expressed are those of the authors and their sources and do not necessarily reflect the opinions of the Department of Defense or the US Army
1972 was President Richard M. Nixon’s winter of discontent. Although elected to bring peace to Southeast Asia, Congress and his own Secretary of Defense were trying to tie his hands in dealing with a stubborn North Vietnam. Nixon was trying to extricate the US from the war with dignity. Nixon wanted North Vietnamese guarantees that the South Vietnamese government would be left intact, that all fighting in Indo-China would end, that northern infiltration into the South Vietnam would cease, that North Vietnam would withdraw from Laos and Cambodia, that U.S. prisoners of war would be returned and that US missing in action would be accounted for.1 North Vietnam’s negotiators had walked out of the Paris Peace talks and were refusing to return, figuring that U.S. politics would force Nixon to abandon South Vietnam and the POWs without any concessions on their part. Congress was recessed, but when they returned from the Christmas recess, they were expected to force Nixon into unilateral withdrawal by stopping all funds for the war. Nixon’s position looked untenable, but he decided to launch a massive bomber strike against Hanoi to force the North Vietnamese back to negotiations before Congress could reconvene. The bomber campaign was named Operation Linebacker II.
Linebacker II remains a controversial operation. The USAF Strategic Air Command (SAC) made some serious mistakes, suffered serious losses and their campaign came close to failure, yet after the war they launched a massive media and public relations blitz (and internal witch hunt) to prove that Linebacker II was an unqualified success that unfolded as planned. The North Vietnamese, glorying in their unprecedented destruction of USAF B-52 bombers, hailed Linebacker II as the “Dien Bien Phu of the Air”–despite their heavy losses to the bombers. Incredibly, the most-objective observers and commentators of Linebacker II may be the Soviet advisers attached to the North Vietnamese air defense forces. They recorded their observations in official after-action reports which remained classified and inaccessible until recently. They provide a professional assessment of both belligerents during Linebacker II.
........

Could you please repost, it seems to be a dead link.
Viktor

So far the Electronic Warfare made life more "interesting" for the SAM operators, but with experience and luck, they were still able to achieve...
... but it changed during the next year of the Vietnamese war, 1967.

US EW agencies found out the frequency of the SA-75MK Dvina (SA-2B/F) missile beacon, and it turned out to be in a narrow 20MHz range.
TAC immediately started to send planes with two QRC-160-1/1A pods, where one pod was solely dedicated for the missile beacon noise jamming.
For several months, all missiles were lost right after launch.

A new rule was enforced that before launch, the missile beacon channel should be checked for jamming.
If jamming was present, it was forbidden to launch. 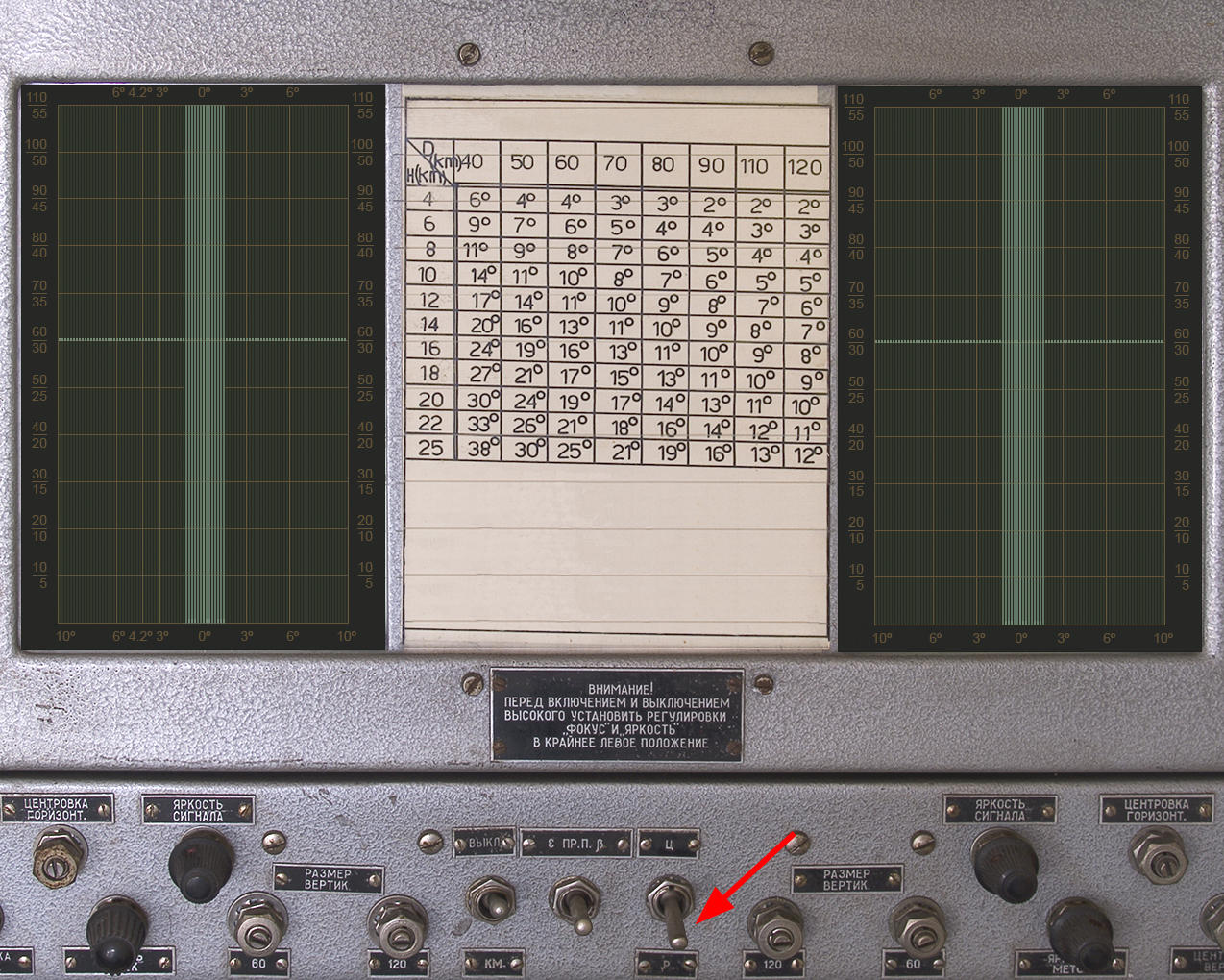 As the situation become critical, Soviet experts were called in to find out and test the solution.
During 1969, Technical Bulletin-1 was released to all Soviet allies using the SA-75MK Dvina system. 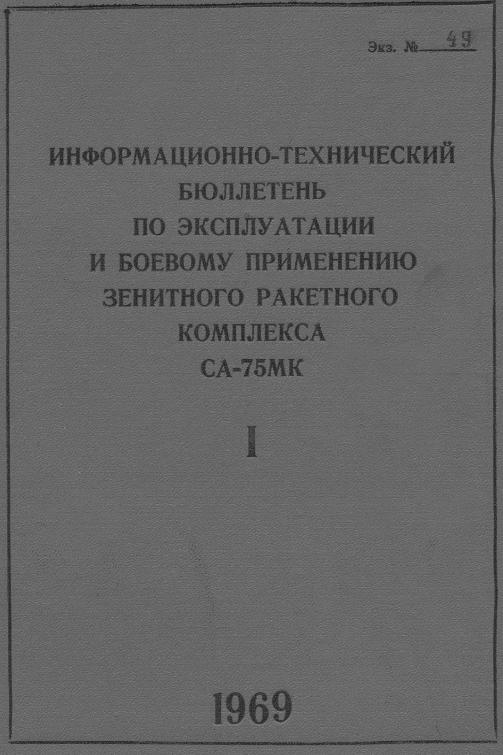 - Adding the H<1 switch by modifying the missile guidance electronic, reducing the minimum effective altitude into 500m.
- Adding the RAB.po.K3 switch, in case of radio proxy fuse jamming. (this was feared by the Soviets, but never happened)
- Adding the PA-00 cabin "doghouse" at the top of the RSNA cabin for visual target tracking, in dense jamming environment.
- Adding the APP-75M instrument, to make launch calculations automatic.
- V-750VK missile FR-I5AK beacon output was increased from 20W into 80W.

After this bulletin was implemented, the beacon jamming become ineffective, and TAC stopped using it.
Quite interesting, that SAC never received hint of this modification, so the B-52 bombers were still trying to jam the missile beacon in 1972, using up valuable jammers for nothing. 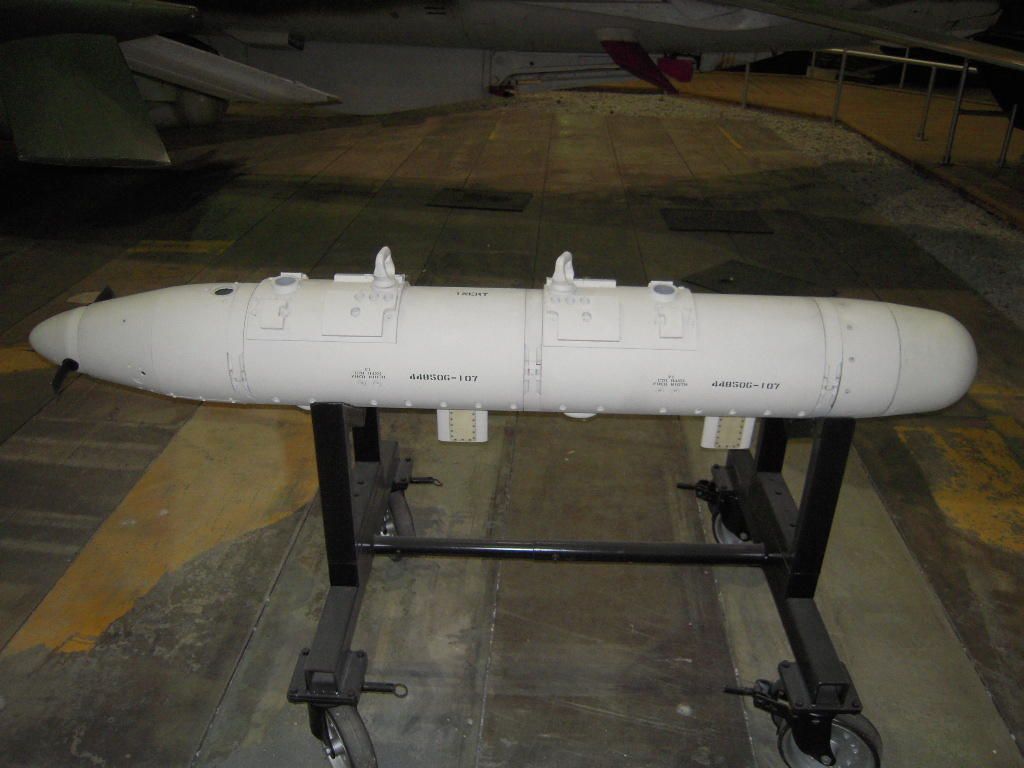 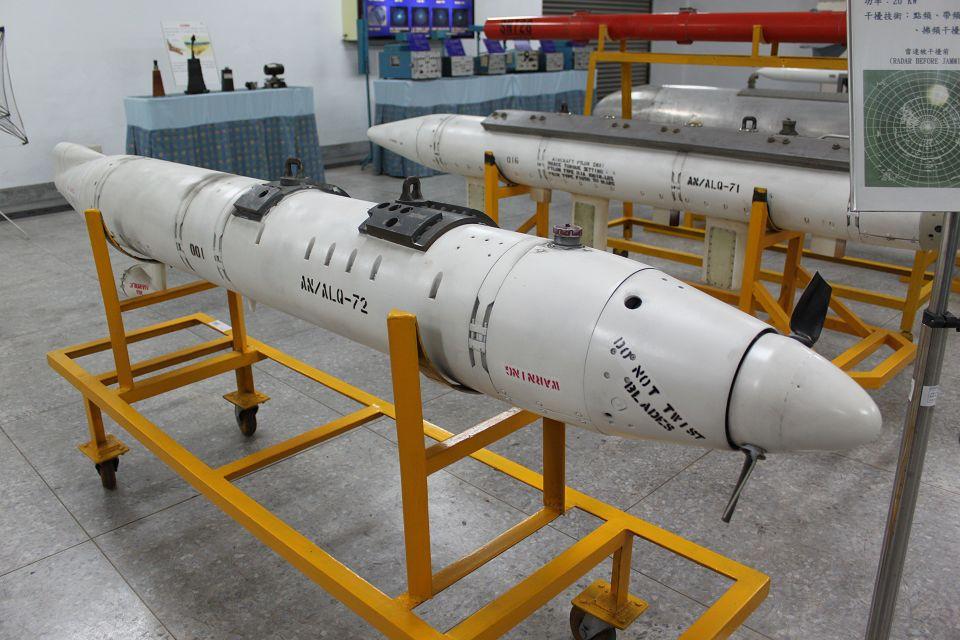 Soviet Involvement in the Vietnam War

MOSCOW (AP) -- The Soviet Union sent 3,000 troops to Vietnam during the U.S.
involvement there, according to the first account in the Soviet press about the
secret military action.
In 1965, Soviet soldiers shot down the first U.S. planes lost in Vietnam, the
magazine Eko Planety (Echo of the Planet) reported.
The Soviet Defense Ministry previously has acknowledged that Soviet advisers
served in Vietnam, and that 13 were killed. But no details of their activities
have been published before in the Soviet Union, the Tass news agency reported
Saturday.
Tass said the magazine's account was based on interviews with those who
carried out Soviet policy in Vietnam in the late 1960s and early 1970s,
including Ilya Shcherbakov, the Soviet ambassador to Vietnam from 1964-1974.
It was written by a former Tass correspondent who reported from Vietnam
during the war, Alexander Minayev.
Shcherbakov said the Soviet government was very restrained in the conflict
between Communist North Vietnam and the U.S.-backed South.
"But the Tonkin incident confronted Nikita Khrushchev with a dilemma," the
article said, referring to U.S. retaliation in 1964 for an alleged attack by
North Vietnam on American ships in the Gulf of Tonkin. The incident prompted the
United States to escalate greatly its troop presence and involvement in the war.
"On the one hand, North Vietnam, a socialist country, had suffered from air
strikes and shelling from the sea. On the other, the shock of the Caribbean
crisis was still quite fresh in his memory," it said, a reference to the 1962
Cuban Missile Crisis.
"Khrushchev decided to send a new ambassador to Hanoi to clarify the
situation," and Shcherbakov got the job, the article said.
The magazine said then-Soviet Premier Alexei Kosygin warned Shcherbakov to
"keep both eyes open" to avert Soviet involvement in the war when he visited the
country in 1965.
By that time, however, Khrushchev was out of power and had been replaced by
Leonid Brezhnev, who according to Shcherbakov favored more direct involvement to
aid North Vietnam.
Soviet aid began flowing to North Vietnam in early 1965, the magazine said.
In August 1965, Soviet forces shot down the first U.S. planes. But after 1966,
it said no Soviet troops directly participated in combat because the Vietnamese
forces had been trained to handle the Soviet equipment.
North Vietnam independently planned and carried out operations in South
Vietnam, according to Shcherbakov and Col.-Gen. Vladimir Abramov, who led a
group of Soviet military advisers in the region. The two said they were not even
told of the Vietnamese commander's plans.
The war began in 1954 and ended with a Communist victory in 1975.

Documentary from a few years back but with English subs, on the S-75 (SA-2) SAM during the Vietnam War.

George1 wrote:Documentary from a few years back but with English subs, on the S-75 (SA-2) SAM during the Vietnam War.

Does anyone know that the song at 6:10 is I cant seem to find it?
Sponsored content