This is a disappointment, I was hoping we will get 2 batteries this year...

BELGRADE, February 19. /TASS/. The first of six Russian-made Pantsir-S1 air defense systems would be shipped to Serbia before the end of this week, Serbian TV reports.

According to the report, Russian Defense Minister Sergey Shoigu reached this agreement with his Serbian counterpart Aleksandar Vulin during his visit to Belgrade on February 17.

The report also noted that the Serbian soldiers have undergone training and are ready to work with the new equipment.

On October 24, 2019, Serbian President Aleksandar Vucic announced that Belgrade ordered the Pantsir systems. In January this year, a source in the military-industrial complex told TASS that shipments are slated to begin in late February.

The Pantsir-S system is made for close-range air defense for civilian and military objects in any weather and radio-electronic conditions around the clock. The system is also capable of engaging ground-based and water-based threats.

As reported by the Sputnik Srbija news agency , the first two of the 30 modernized T-72MC White Eagle tanks were delivered to Serbia on October 28, 2020, which were donated by Russia within the framework of an agreement on military-technical cooperation that was reached between the Presidents of Serbia Aleksandar Vucic. and the Russian Federation by Vladimir Putin. 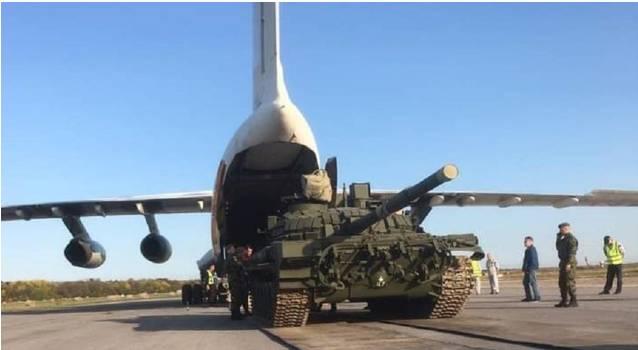 
On December 22, 2016, Serbian Prime Minister (now President) Aleksandr Vucic, following a meeting in Moscow with Russian Defense Minister Sergei Shoigu, announced that the Russian Federation would provide military-technical assistance to Serbia. As part of military-technical assistance to Serbia, Russia, from the presence of its Armed Forces, transfers to the Serbian side six MiG-29 fighters, thirty modernized T-72 tanks and thirty modernized armored reconnaissance and patrol BRDM-2MS.

On the part of bmpd, we point out that, according to known information, the first two T-72MS tanks were delivered to Serbia at the Pilot-Colonel Milenko Pavlovich airfield in Batainitsa by Il-76TD transport aircraft of the Russian airline Aviacon Tsitotrans, which in itself is sufficient a rare example of the use of the Il-76 for transporting tanks.

Serbia thus became the third, after Nicaragua and Laos, a well-known recipient of modernized T-72MS tanks ("Object 184-1MS"). The modernization of T-72B1 tanks from the availability to the T-72MS version for foreign customers is carried out by JSC "61 armored repair plant" (Strelna, St. Petersburg).

This version of the modernization of T-72 tanks under the index "Object (product) 184-1MS" was developed as part of the ROC "Proryv-2G" in the early 2010s jointly by JSC VNIITransmash, FGBU 29 KTC of the Ministry of Defense of Russia and JSC "61 armored repair plant" by order of OJSC "Oboronservis". A prototype of the T-72B1 tank, modernized according to this version, was demonstrated for the first timein June 2012 at the Second International Forum "Technologies in Mechanical Engineering 2012" held in Zhukovsky. having received the nickname "White Eagle" for its unusual white color. In 2015, JSC Rosoboronexport signed the first contract for the supply of 50 T-72MS tanks to Nicaragua, where they were delivered in 2016-1017. In the years 2018-2019 was carried out delivery of T-72MS in Laos.

Serbian President Alexander Vucic announced the procurement of the Pantsir-S1M air defense system while examining the Serbian military exposition, dedicated to the Day of Unity, Freedom and National Flag of Serbia.