As Ivan Safronov and Alexandra Djordjevic write in the article "The list that fills the imagination", published in today's issue of the newspaper Kommersant, Uzbekistan has decided on the types of weapons and military equipment that it would like to acquire in Russia. Interest concerns both armored vehicles and ammunition, as well as Su-30SM fighters. However, according to Kommersant's information, Uzbekistan's requests do not match its financial capabilities - despite the fact that it is unprecedented for the country - not a CSTO member - to pay for weapons and equipment at domestic prices.

The sources in the sphere of military-technical cooperation (MTC) told that Kommersant has determined the main types of weapons and military equipment that Russia would like to acquire in Russia. According to them, the list includes, in particular, combat and military transport helicopters, armored vehicles, small arms and ammunition. There is interest in the Su-30SM multifunctional fighters. "In August, a delegation of high-ranking Uzbek siloviki visited the Irkutsk Aircraft Building Plant, where it got acquainted with its production facilities," one of Kommersant's sources said. "They were pleased to see it." And on September 20, Security Council Secretary Nikolai Patrushev discussed the prospects of military-technical cooperation at a meeting with the Security Council Secretary under the President of Uzbekistan Viktor Makhmudov. The details of the meeting were not disclosed, however, according to Kommersant's information, the sides touched upon the issue of repairing military equipment that Tashkent inherited after the collapse of the USSR and in need of it (for example, T-62 and T-72 tanks to T-62M and T-72B3 or helicopters of type "Mi").

The cooperation between Moscow and Tashkent in the arms sector is rather modest: according to a source from Kommersant close to the RF Ministry of Defense, up to 2005, separate deliveries of BTR-80, Mi-8 helicopters, various caliber, grenade launchers with ammunition, and sniper weapons were conducted. Subsequently, the Uzbek security forces' interest was limited to supplies of ammunition (both rifle and artillery), as well as explosives, Kommersant's source continues: "They (explosives) were needed for special forces of state security agencies, which needed to penetrate into premises for the liquidation of a potential threat ". Russia and Uzbekistan did not conclude larger contracts.

The situation changed after the death of Uzbek President Islam Karimov. Already with his successor Shavkat Mirziyoyev, the military departments of the two countries signed on November 29, 2016 an agreement on the development of military-technical cooperation. In April 2017, the parties ratified the treaty: during the international conference on security, Russian Defense Minister Sergei Shoigu exchanged his letters with his Uzbek counterpart Kabul Berdiyev.

The terms of this treaty are "unprecedented," sources in the MTC say in the field of military-technical cooperation: Uzbekistan gets the same privileges with Russia's CSTO partners. In particular, the Uzbek military and other siloviki got the right to buy weapons and special equipment not for commercial but at domestic prices (for example, according to this scheme, Kazakhstan purchases Russian Su-30SM fighters). "This was done because Moscow wanted to attract Tashkent for geopolitical reasons and decided to give preferences equal to those of the CSTO member countries," one of the interlocutors said. Another source specifies that, coupled with the threat emanating from Afghanistan, the Russian negotiators expected that Uzbekistan would become "more compliant". However, this has not happened yet: according to him, before the conclusion of contracts, even under such a scheme "it is still very far". "Now they have a rather large list of desires, it greatly exceeds their capabilities and needs, but there is no guarantee that at least some of this will be acquired," the source of Kommersant believes.

Recall that in April, Deputy Director of the Federal Service for Military-Technical Cooperation Vladimir Drozhzhov reported that Moscow and Tashkent are discussing the establishment of service centers in Uzbekistan to service military equipment and weapons. According to Kommersant's information, Russia expected that the Uzbek Su-25 attack aircraft (eight units) and the MiG-29 fighters (eight cars) awaiting repair would be modernized at the enterprises of the Russian aviation industry. However, according to Kommersant's information, even after signing the agreement, the Uzbek military preferred the first shipment of cars (four each) to Russia, not to Russia, and to Belarus to the 558th aircraft repair plant (Baranovichi). This step caused "some kind of bewilderment on the part of the Russian side," says the interlocutor in the sphere of military-technical cooperation: "We took a huge step forward, we did not feel a response yet."

Yesterday, the Federal Service for Military Technical Cooperation refrained from commenting on "Kommersant".

As TASS reported on November 30, 2017, the Ministry of Defense of Uzbekistan and Rosoboronexport signed a contract for the supply of 12 MI-35 attack helicopters. This was reported on Thursday by the diplomatic source on the fields of the exhibition "Russia and Uzbekistan: 25 years of strategic partnership".

"The contract for the supply of 12 attack helicopters has been signed, deliveries of military vehicles will begin in 2018. Long negotiations on the agreement and the terms of its implementation were completed during the recent visit to Uzbekistan of the Russian Prime Minister Dmitry Medvedev," the source said.

As TASS reported on November 30, 2017, the Ministry of Defense of Uzbekistan and Rosoboronexport signed a contract for the supply of 12 MI-35 attack helicopters. This was reported on Thursday by the diplomatic source on the fields of the exhibition "Russia and Uzbekistan: 25 years of strategic partnership".

"The contract for the supply of 12 attack helicopters has been signed, deliveries of military vehicles will begin in 2018. Long negotiations on the agreement and the terms of its implementation were completed during the recent visit to Uzbekistan of the Russian Prime Minister Dmitry Medvedev," the source said.

Pity no mention of cost.

Likely getting ready for the next Usa sponsored proxy war
George1

Prospects for military-technical cooperation between Russia and Uzbekistan

According to Novaya Gazeta in the article by Alexandra Djordjevic “Radars for Tashkent. Uzbekistan is rearming its army at the expense of Russia, ”Moscow and Tashkent at the end of May 2019 held fruitful negotiations at a meeting of the Intergovernmental Commission on Military-Technical Cooperation (MTC). As it became known to Novaya Gazeta, by June 2019, 12 new contracts for the supply and modernization of equipment entered into force. In addition, Uzbekistan is planning to purchase Su-30SM fighter jets, Sopka-2 12A6 radar complex, a maintenance workshop for the Pechora-2M anti-aircraft missile system, radar stations and a number of other equipment. The republic intends to implement all these wishes at the expense of state loans from Russia: if the next export credit is approved, it can become the third in the last three years.

The fact that at the fifteenth meeting of the Intergovernmental Russian-Uzbek Commission on MTC, held on May 23, 2019, “key” decisions for this cooperation were adopted, “Novaya Gazeta” was told by sources familiar with the negotiations and confirmed in the Federal Service for Military technical cooperation (FSMTC) of the Russian Federation. In particular, the commission will prepare an agreement on the modernization and re-equipment of the armed forces of Uzbekistan with modern military equipment until 2025.

For example, in the FSMTC of the Russian Federation, Novaya Gazeta was told that as part of the state export credit issued to Uzbekistan in 2017, a batch of Mi-35M helicopters and property were delivered to them. According to the Novaya source, the delivery time of four Mi-35M helicopters comes in the fourth quarter of 2019, and another eight helicopters - in 2020. At the same time, within the framework of the loan, several tens of millions of dollars remained unused, since the total value of the contracted property was about $ 200 million. “For the remainder, the Uzbek side wants to take additional military products, however, it is also possible that the Uzbek side will be allocated additional credit funds,” said a source of Novaya Gazeta. Meanwhile, as part of the second loan in recent years, issued to the government of Uzbekistan in October 2018, in May-June 2019, another 12 contracts entered into force, the specific content of which was not disclosed to the FSMTC.

The Russian side confirmed that Tashkent is interested in the imminent acquisition of Su-30SM fighters (according to sources, ground support for flights and aviation weapons should be included, as well as training for flight and engineering staff, and the delivery of a training complex) 12A6 Sopka-2 complex (it is possible to purchase nine sets), a maintenance workshop for the Pechora-2M air defense missile system and a number of radar stations (according to Novaya Gazeta, speech children on the types of "opponent-GE", "Gamma-DE" and "E-approaching" and 31 sets of "Fara-BP"), and communication systems for various purposes.

“Cooperation with the Republic of Uzbekistan is carried out in a planned manner and is fully consistent with the high level of strategic cooperation between our countries,” said Novaya Gazeta in the government service.

According to the source “Novaya”, “Concern VKO Almaz-Antey” in 2018 agreed with the Uzbek side a draft contract for the modernization of four P-37 radars and handed over proposals for upgrading an additional seven P-37 radars to the level 12A6 Sopka-2 ". The contract, according to the publication, should be signed in July. In addition, according to the representative of the Federal Service for Military-Technical Cooperation of the Russian Federation, a modernization project for the P-37 radar up to the 12A6 Sopka-2 level is currently being discussed, the contract on this topic is in the final stages of coordination with the Uzbek side.

Cooperation between Moscow and Tashkent in the weapons sector in the early 2000s was quite modest: until 2005, there were separate deliveries of the BTR-80, Mi-8 helicopters, mortars of various caliber, grenade launchers with ammunition, and sniper weapons. Subsequently, the interest of the Uzbek security officials was limited to the supply of ammunition and explosives. For a long time, Russia and Uzbekistan have not concluded larger contracts. The situation changed after the death of President Islam Karimov - under his successor Shavkat Mirziyoyev. On November 29, 2016, the military departments of the two countries signed an agreement on the development of military-technical cooperation, in April 2017 it was ratified. For the last couple of years Tashkent has been actively receiving state export credits from Moscow and has shown an increased interest in the purchase of weapons. Back in August 2017, a delegation of high-ranking Uzbek security officials visited the Irkutsk Aircraft Building Plant, where they got acquainted with its production facilities.
VARGR198

The first Mi-35M helicopter for Uzbekistan 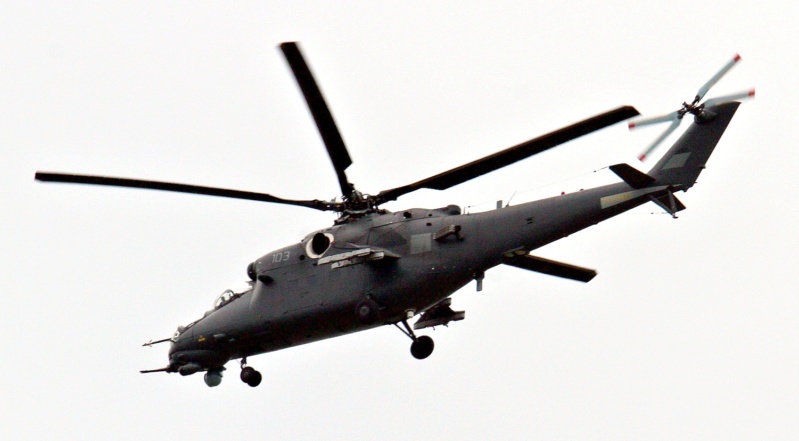 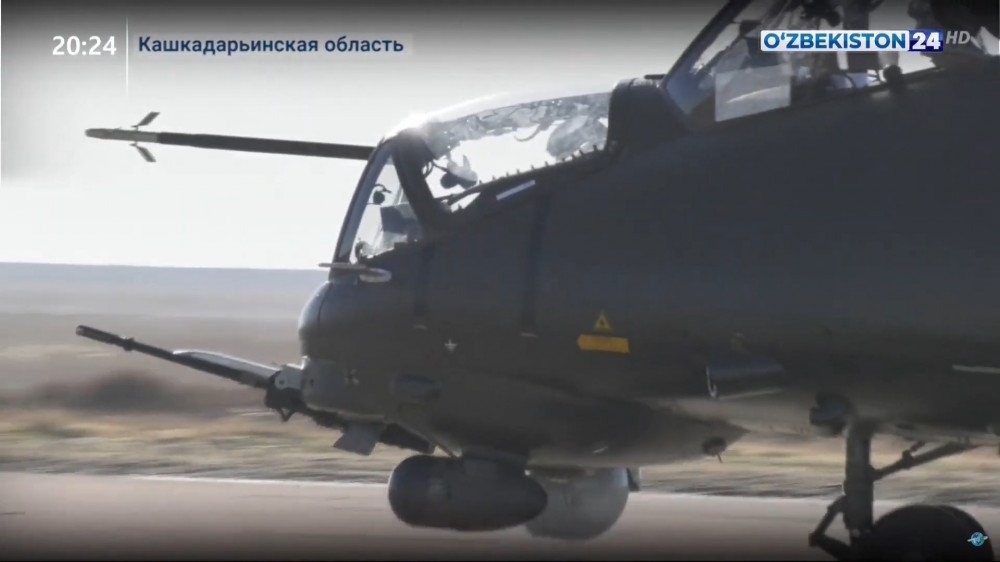 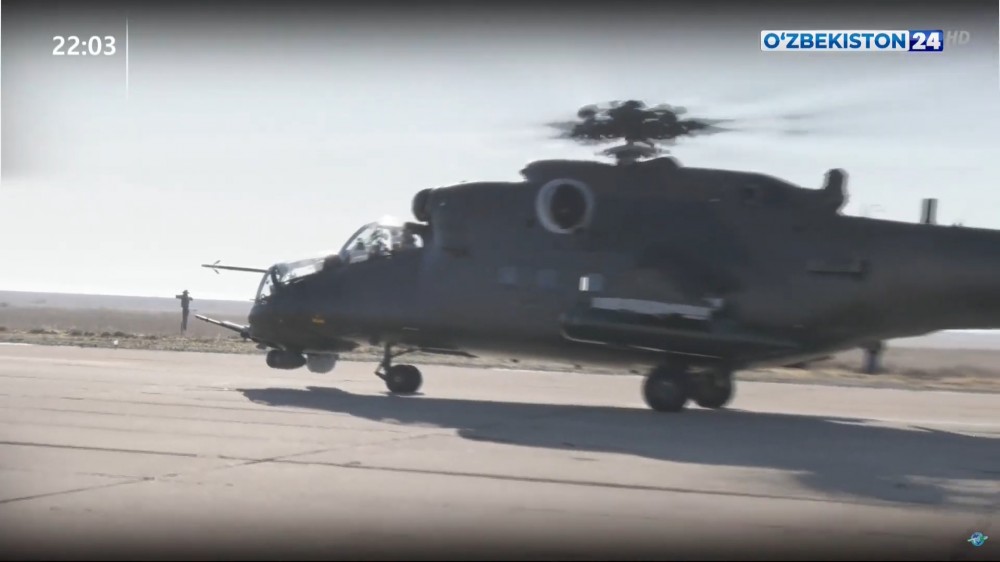 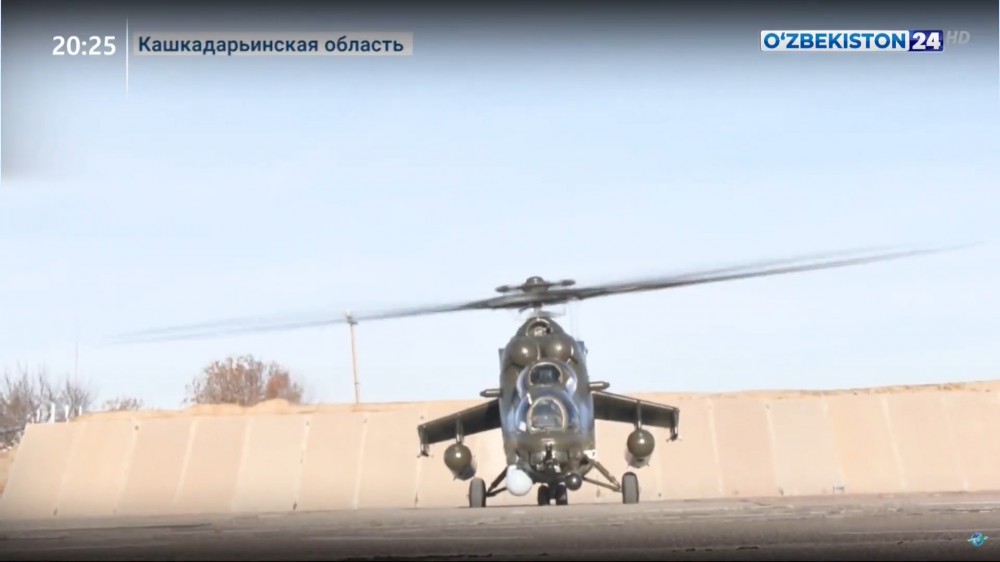