Russia and South Korea were the main contenders for the supply of SSK Indonesia
18.08.2009

MOSCOW, August 17. (ARMS-TASS). South Korea intends to send a proposal to sell two Indonesian Navy NSA as soon as the Government has announced dates of the project, which is estimated to cost 1 billion dollars, said Jane Defense Industry ", with reference to a source in Jakarta.

Although the commencement of the process of acquisition, is likely to be postponed to a later date because of the difficult economic situation in the country, the commander of the Navy Admiral Teddzho Edhay Purdidzhatno 10 August, state media reported that the preference for shipbuilding companies from South Korea and Russia, who are ahead of competitors from France and Germany.

As the source of "Jane", was originally planned that the NSA Type-209 will be presented to the German company, but with a great deal of probability, a proposal for their construction would come from South Korea. The company submitting the project NSA Type-209 receives a slight advantage, because now armed with the Navy in Indonesia are already two submarines of this class. Submarine-type 209/1300 "Chakra" and "Nanggala" were built in Germany by Deutsche Hovaldsverke-Verft in 1980. Home DEPL class "Chakra" was adopted in May 1981.

Home DEPL class "Chakra" was upgraded by Daewoo in the period from 2004 to April 2006. In April of this year, Daewoo signed a contract for the modernization Refurbished and second DEPL "Nanggala.

Indonesia plans to increase its submarine fleet related to the increasing number of modern submarines in the region. In particular, in the Malaysian Navy in 2002 signed a contract worth 1.2 billion dollars next year will be second-class submarine "Scorpio". First DEPL was in January of this year. In May of this year, Vietnam announced that it is close to signing an agreement with Russia worth 1.8 billion dollars to supply six DEPL class "Kilo".

As the commander of the Navy, the specification of procured submarines have already been identified, based on the assumption that their characteristics must be greater than those of submarines of other countries of the region. In case the applicants would not be able to ensure that their projects NSA to the Indonesian Navy, the tender will be canceled.

According to the source, one of the key parameters in the evaluation of proposals applicants will offset the amount of and conditions for technology transfer.

As planned, the first submarine and a large part of the second will be built in the company winning the tender. However, equipping and installation of equipment submarines second boat to be held in Indonesia.

The pre-planned that the new submarines will be taken to adopt, by 2015, but now these dates will be rescheduled.

Financing of construction will be carried out at the expense of the defense budget, which in 2010 will be increased by 21% - up to 40.6 trillion rupees (4.08 billion dollars), and loans from foreign banks.

Indonesia to Get $400 Mln Arms Credit from Russia

The credit will be provided for a seven-year term, Rosoboronexport said.

This is the second credit agreement between VEB and Indonesia’s Finance Ministry in the past two years.

It reminds me old Sukarno years!!!

Indonesia to Get $400 Mln Arms Credit from Russia

The credit will be provided for a seven-year term, Rosoboronexport said.

This is the second credit agreement between VEB and Indonesia’s Finance Ministry in the past two years.

It reminds me old Sukarno years!!!

So Russia has decided to use the Airbus/Boeing method of selling planes... with or without the prostitutes and alcohol?
max steel

Soo... Indonesian Super Tucano crashed due to pilot mistake, when he ejected and left poor software technician in back seat, which was forced to eject himself too... and seems they both suffered life ending contusions upon that. Plane crashed into house and wounded 1 woman. 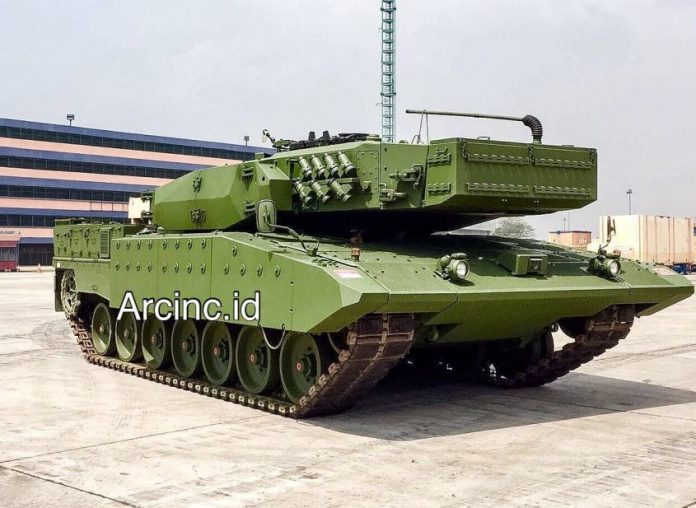 The «Leopard RI» is a modular upgrade package to the Leopard 2A4 main battle tanks for Indonesia. Tanks are internally named Leopard 2RI (RI referring to “Republic of Indonesia”).

The first AW101 helicopter for Indonesia 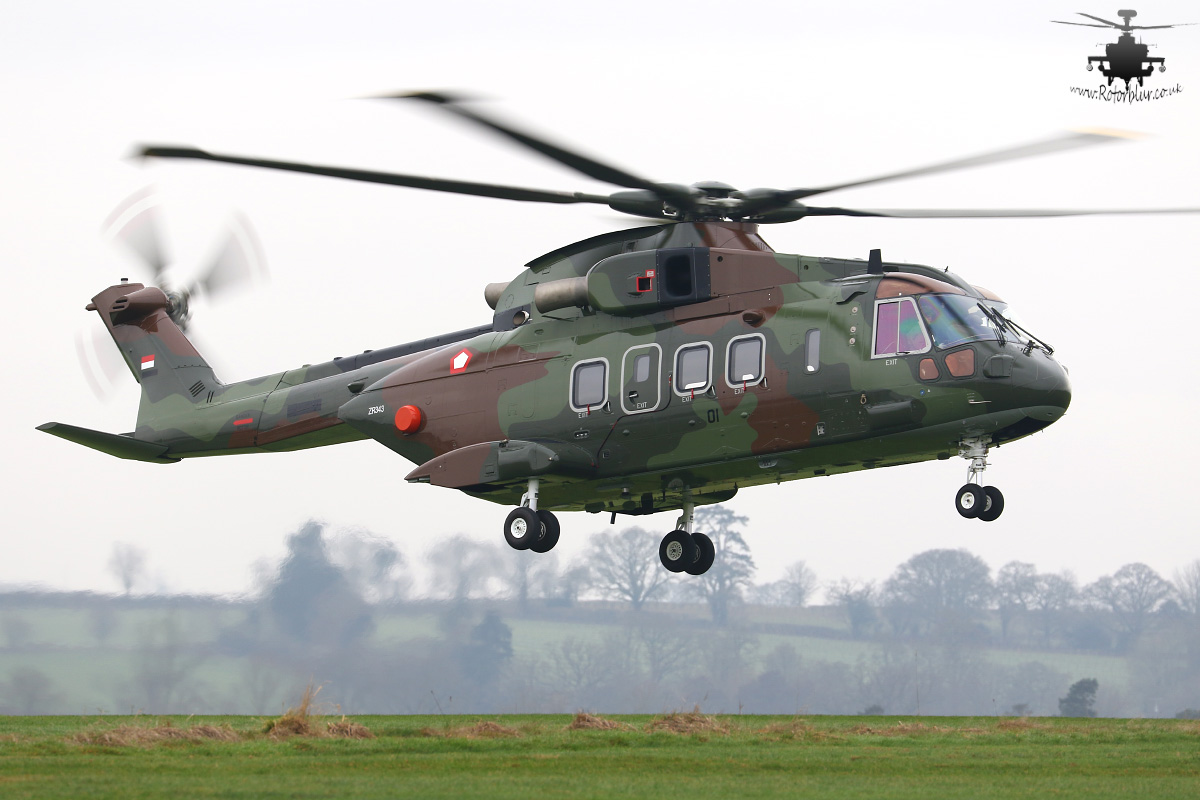 Τhe first frigate built in Indonesia, such as SIGMA was put into operation 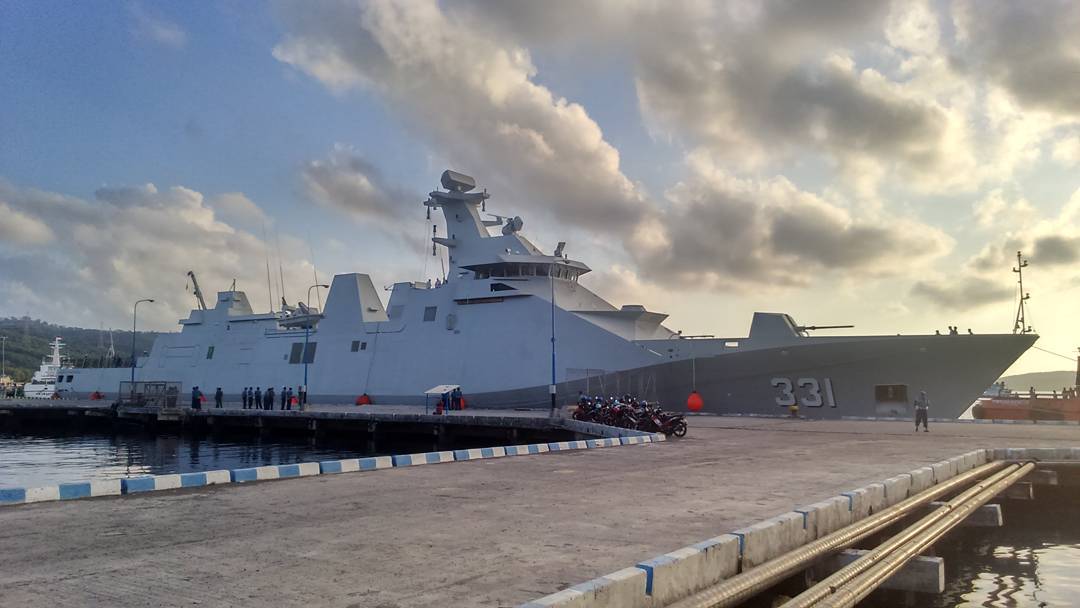 Indonesia has completed the receipt of modernized tanks Leopard 2RI

According to Indonesian media, on March 27, 2017, the final part of the Leopard 2RI tanks, modernized by the German group Rheinmetall, was delivered to the Indonesian port of Tadjung Priok on the Hoegh Bangkok truck-loader in the amount of 21 units, of which Indonesia was supplied under the 2012 contract.

Infantry vehicles BMP-3F in the Marine Corps of Indonesia 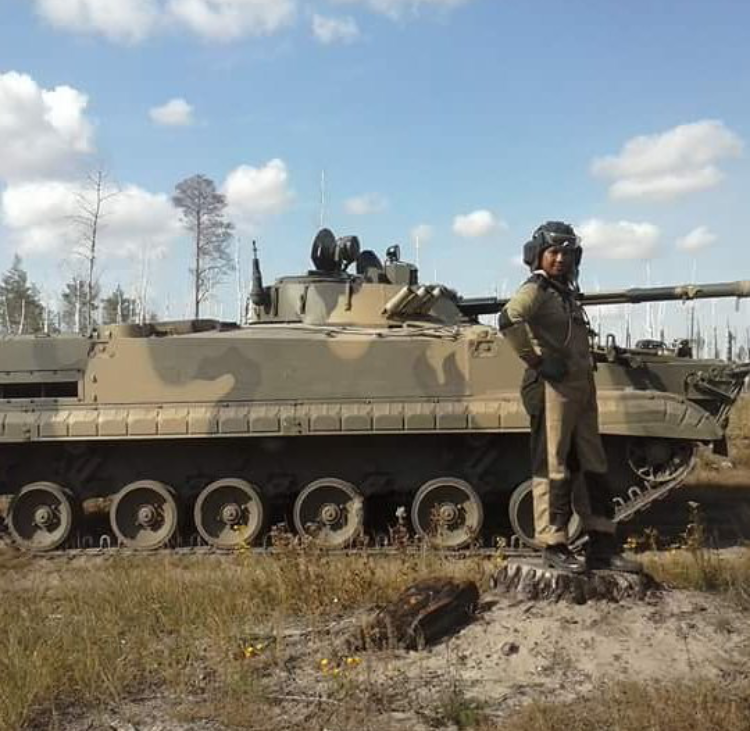 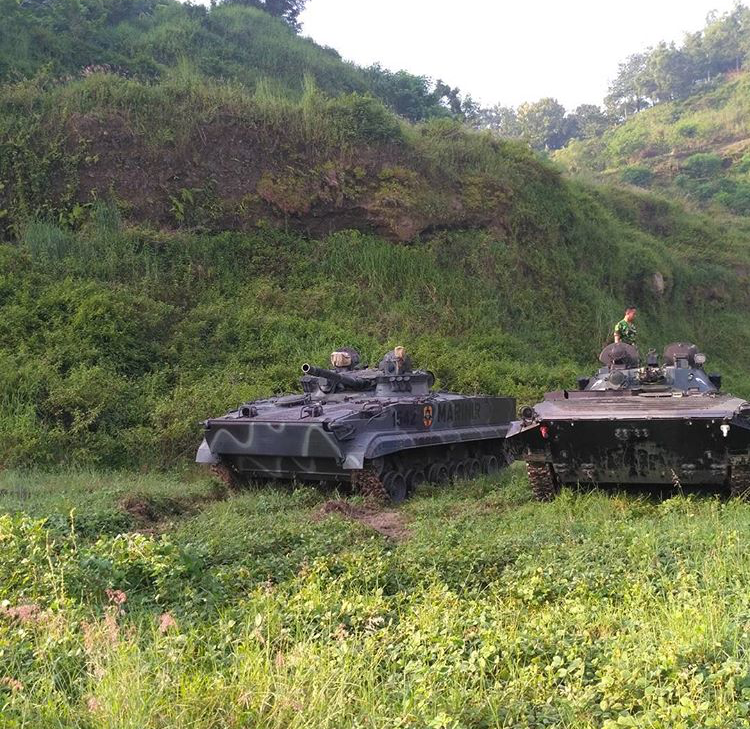 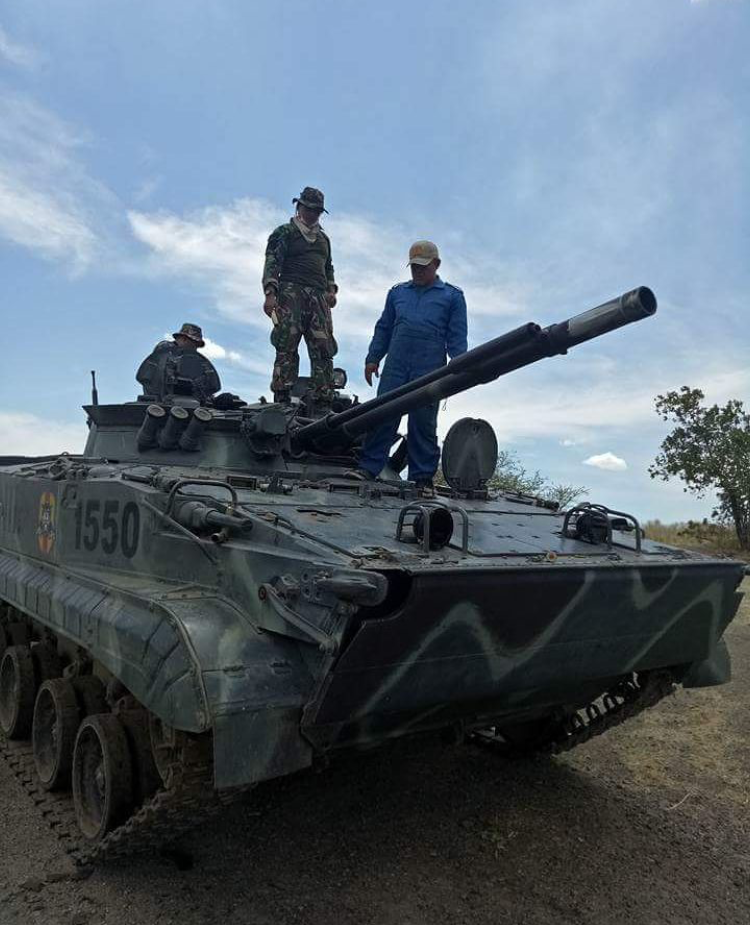 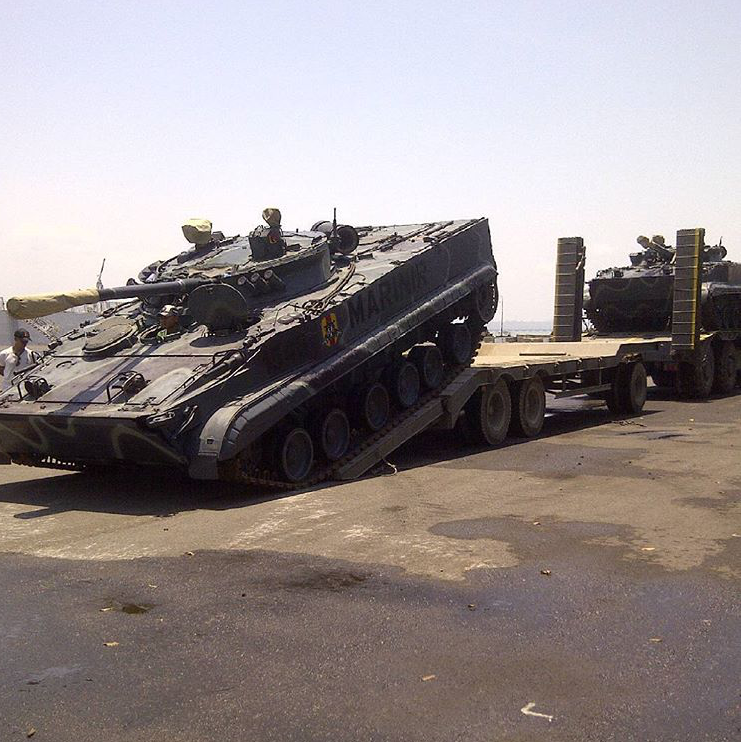 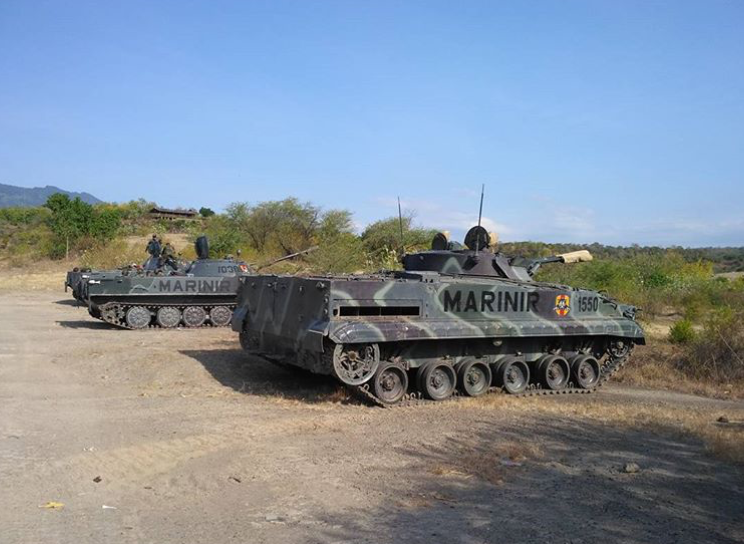 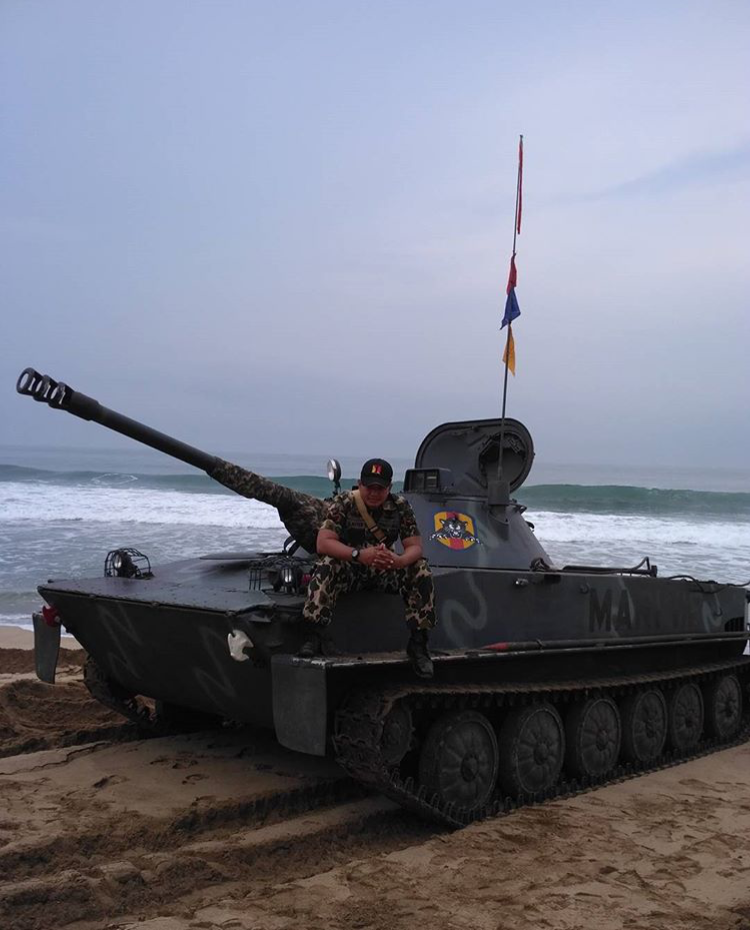 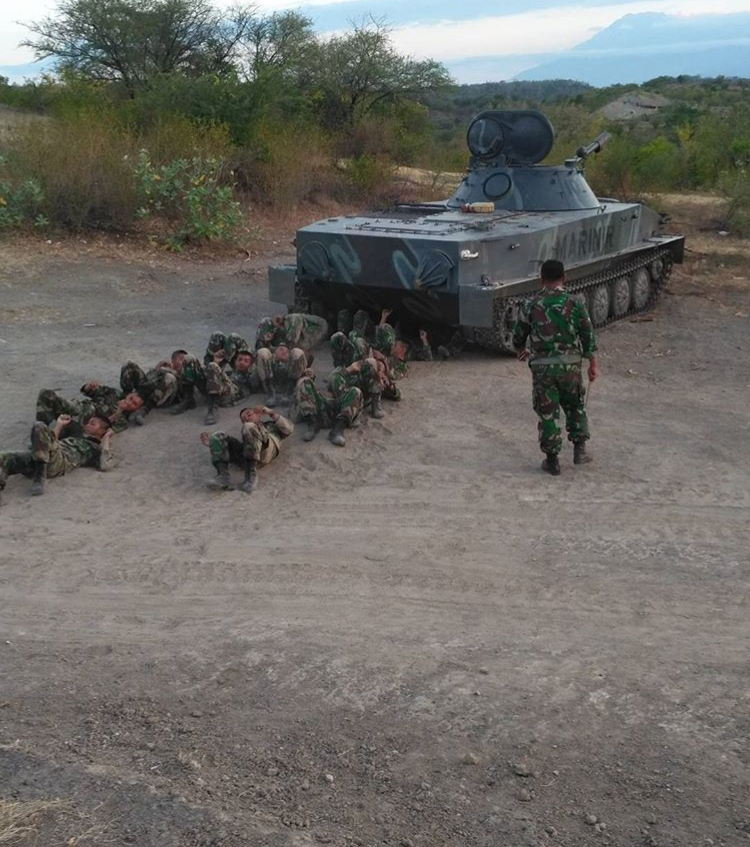 On August 2, 2017, at the shipyard of the South Korean corporation Daewoo Shipbuilding and Marine Engineering (DSME) in the South Korean town of Okpo, the ceremony of transferring the first diesel-electric submarine Nagapasa (onboard number "403") of the DSME1400 project (modified German project 209 / 1200). The ceremony was attended by the Minister of Defense of Indonesia Ramizard Ryakudu. It is expected that in a few days the submarine will enter the transition to Indonesia. 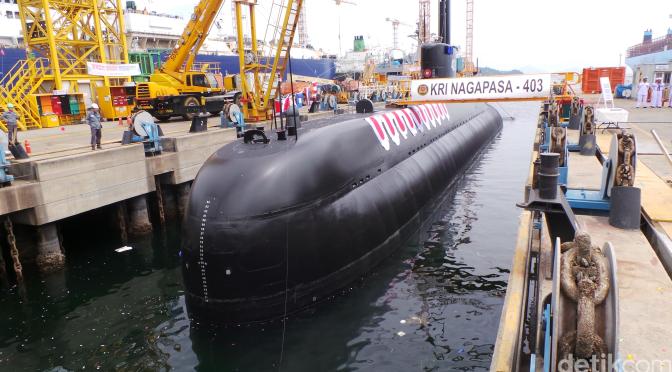 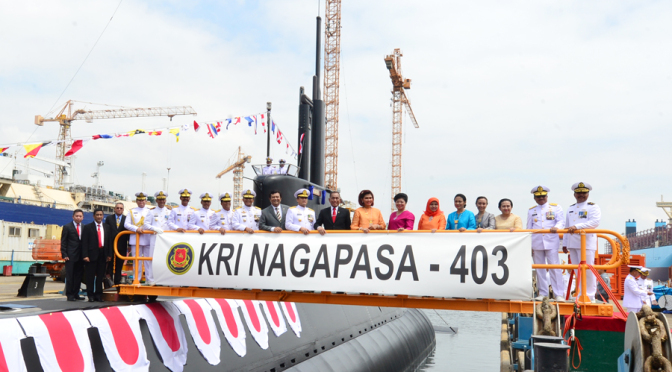 According to the Indonesian web resource fajaronline.com, on August 3, 2017, on the Indonesian air base Sultan Hasanuddin (Makassar, Sulawesi), the Antonov An-124-100M-150 heavy transport aircraft (registration number UR-82009) two Su-27SK fighters from the 11th Squadron of the 5th Air Force wing of the Indonesian Air Force (based on this airfield) were delivered to the "559 Aircraft Repair Plant" (Baranovichi) OJSC in Belarus (airplanes with Indonesian airborne numbers TS-2701 and TS- 2702).

Both planes were sent for repair to Baranovichi by AN-124-100 transport aircraft of the Russian airline Volga-Dnepr on December 9, 2015. According to the data posted on the web site forums.airforce.ru, both these Su-27SKs were operated in the Indonesian Air Force very limited (their total flight time before repair was only 693 hours and 348 hours respectively) and the last few years before the departure for repairs were in Sludge.

Subsequently, the Indonesian Air Force in 2010, under an additional contract, received three more modified Su-27SMK fighters (side numbers with TS-2703 to TS-2705) built by KnAAZ, also in service with the 11th squadron at Sultan Hasanuddin airbase. 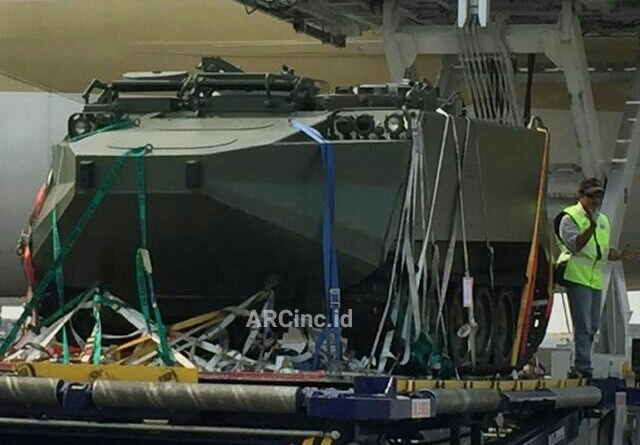 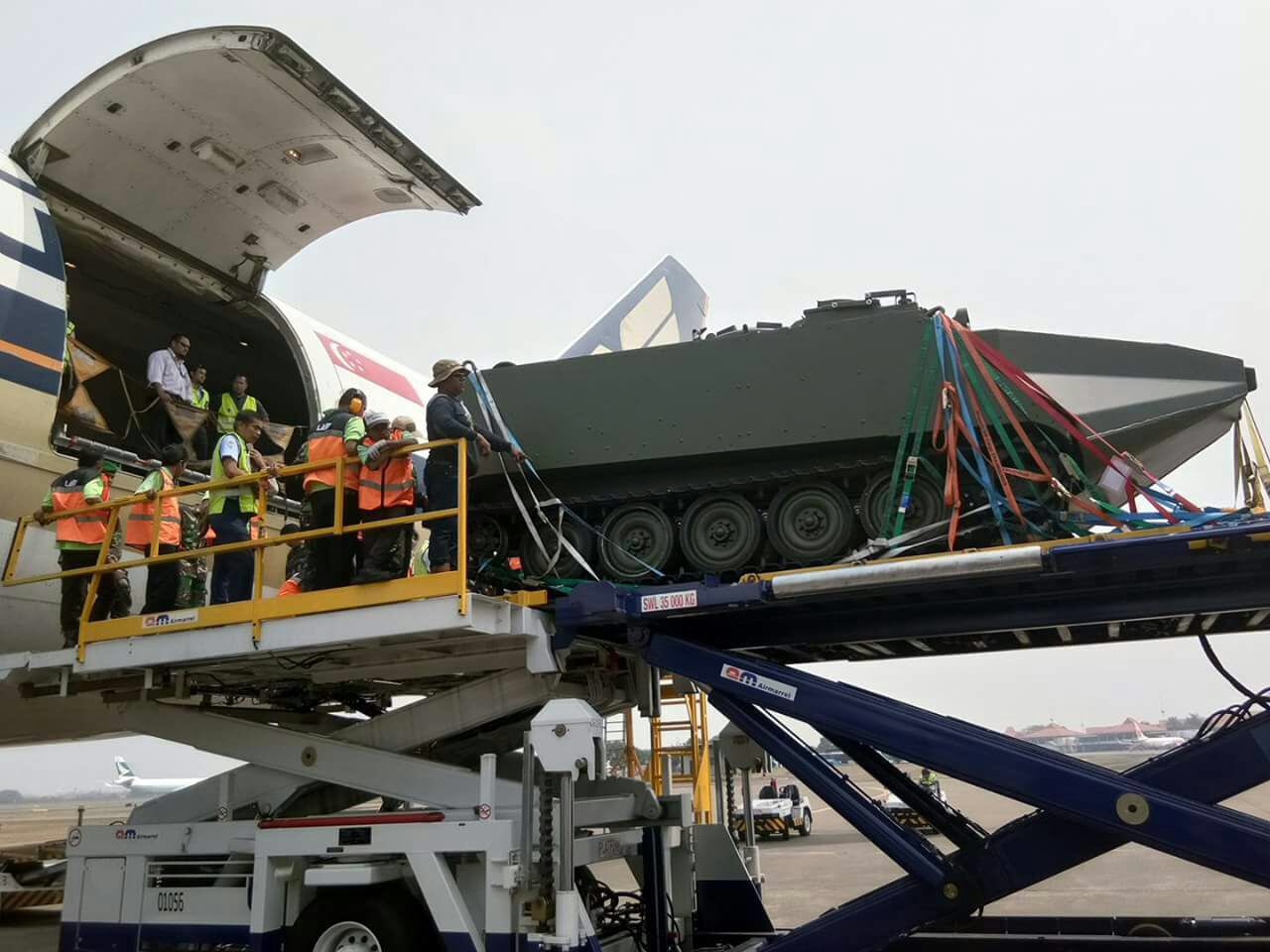 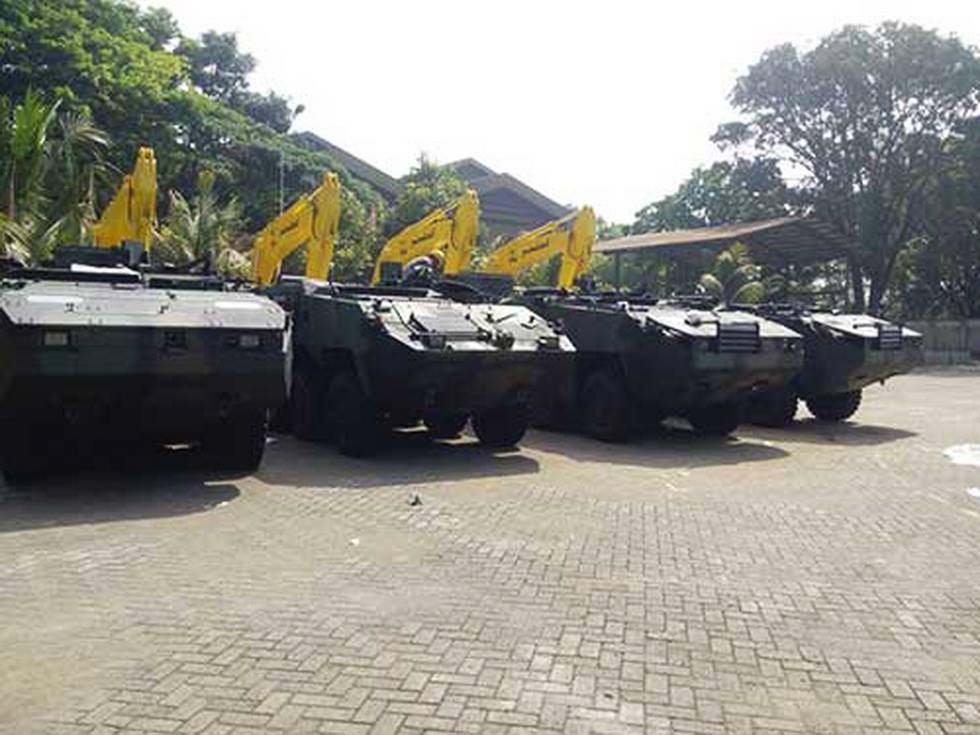 The first consignment received by Indonesia from the Czech Republic by sea and unloaded at the port of Tajjung Priok on September 11 includes two Pandur II (8x8) floating machines that must be equipped with remotely controlled Ares combat units (assemblies of the Brazilian branch of the Israeli company Elbit Systems) from 12 , 7 mm machine guns, one non-floating machine that must be equipped with a remotely controlled Ares combat module with a 30 mm cannon, and one non-floating machine for which a Cockerill 3000 series tower with a 105 mm cannon should be installed. Installation of weapons will be carried out PT Pindad.

The family of armored vehicles Pandur II in variants with the wheel formula 6x6 and 8x8 was developed by the Austrian company Steyr-Daimler-Puch Spezialfahrzeu, now part of the European division of the American corporation General Dynamics as General Dynamics European Land Systems - Steyr (GDELS-Steyr), and is the further development of the previously produced Steyr-Daimler-Puch very popular wheeled BTR Pandur (6x6).

Machines of the Pandur II family were ordered in 2005-2006 as a new generation of armored personnel carriers of the new generation by the armed forces of Portugal and the Czech Republic, but the implementation of both contracts took place with considerable difficulties and delays and was accompanied by significant technical complaints from the armies of both countries. As a result, in both cases, were reduced and the contracts were not fully and partially canceled. In fact, Portugal delivered 188 Pandur II cars, and the Czech Republic - 107 cars (90 of the cars for the Czech Republic were assembled from car kits at the Czech armored repair plant VOP-025 in Novi Jicin). Another 34 APCs Pandur II in 2016 were ordered by the Austrian army, with the beginning of deliveries in 2018.

In 2015, General Dynamics actually curtailed the marketing of Pandur II and sold the full rights to this car to the well-known Czech company Excalibur Army (part of the Excalibur Group, then the Czechoslovak Group). The latter organized the assembling of Pandur II cars at a specially established company controlled by the Czechoslovak Group company Tatra Defense Vehicle in Kopřivnice. In fact, as can be judged, machines for assembling in the Czech Republic are obtained in the form of sets from the Steyr-Daimler-Puch company in Vienna, and are only being finalized in Kopřivnice.

Tatra Defense Vehicle received in early 2017 a contract of the Czech Ministry of Defense for the supply of 20 Pandur II cars in special versions. Earlier in 2015, the Indonesian Ministry of Defense concluded a $ 39 million contract with Excalibur Army to supply a batch of an unreleased number of Pandur II cars in various versions. Excalibur Army also concluded an agreement with the Indonesian association PT Pindad on the joint completion of the supplied armored personnel carriers, equipping them with armament and on localizing the Pandur II assembly to PT Pindad from 2018 if the Indonesian army continues to procure these vehicles. Indonesia has thus become the fourth customer of the Pandur II BTR.

According to Indonesian media, Indonesia's army in October 2017 received 18 acquired in Belgium from the presence of 155-mm / 39 modernized self-propelled howitzers M109A4VE American production. These are the first self-propelled artillery systems of the M109 family in Indonesia. 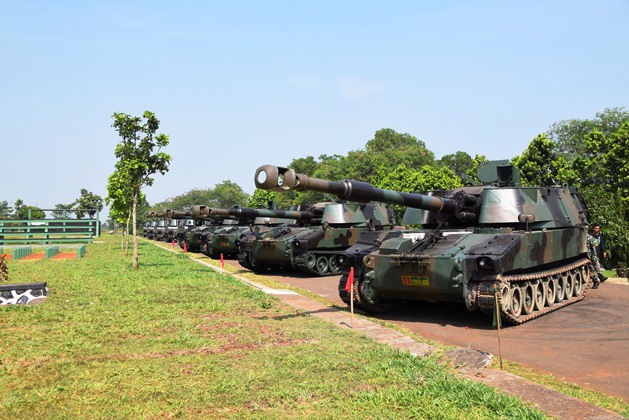 The intergovernmental agreement on the acquisition of 20 withdrawn from the armament of the Belgian army and stored MASA M109A4VE was concluded in early 2016. The artisans were taken to the Indonesian port of Tajong-Priok in late July 2017. As can be judged, two units will be used as a source of spare parts, and the remaining 18 by early October have gone to the completion of three artillery batteries distributed between the two mixed artillery divisions of the Indonesian army.

The Belgian M109A2 ACS has been equipped with inertial-satellite navigation systems since 1998, and in 2005-2008 64 of these automatic control systems were upgraded to the M109A4EV variant. The modernization project M109A4VE was developed under the leadership of the German group Rheinmetall, the work was carried out by the Belgian army's repair arsenal with the participation of the Belgian company Espace Mobile International S.A.

During the upgrade to the level of the M109A4VE, the units were equipped with the mechanized loading system supplied by Rheinmetall, including a sender and a hydraulic shutter drive, which increased the rate of fire, allowing three shots to be fired within the first 20 seconds and six shots during the first minute of fire. Charging after modernization became possible at any elevation angle. The sensor temperature control sensor is also installed.

An improved system of protection against WMD, air conditioning and heating systems, reserve hydraulic drives of the tower and guns, a more powerful generator, a 1,2-kilowatt auxiliary diesel power plant of the German company Kissling Service, and a new protected combat set for 38 shots were installed. 32 ACS in the course of modernization received a set of additional protection.

However, despite the modernization, already in April 2008, the Belgian government decided on a new reduction of the Belgian armed forces, including a complete abandonment of self-propelled artillery. By 2011, all M109A4EE ACSs were withdrawn from the troops and transferred to storage for the purpose of subsequent sale. Now 20 of them are sold to Indonesia. 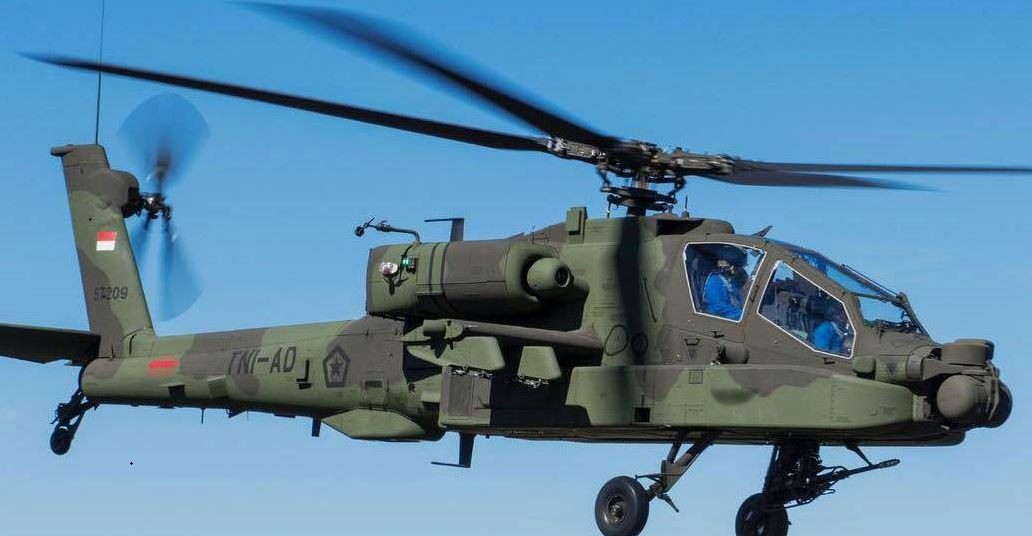