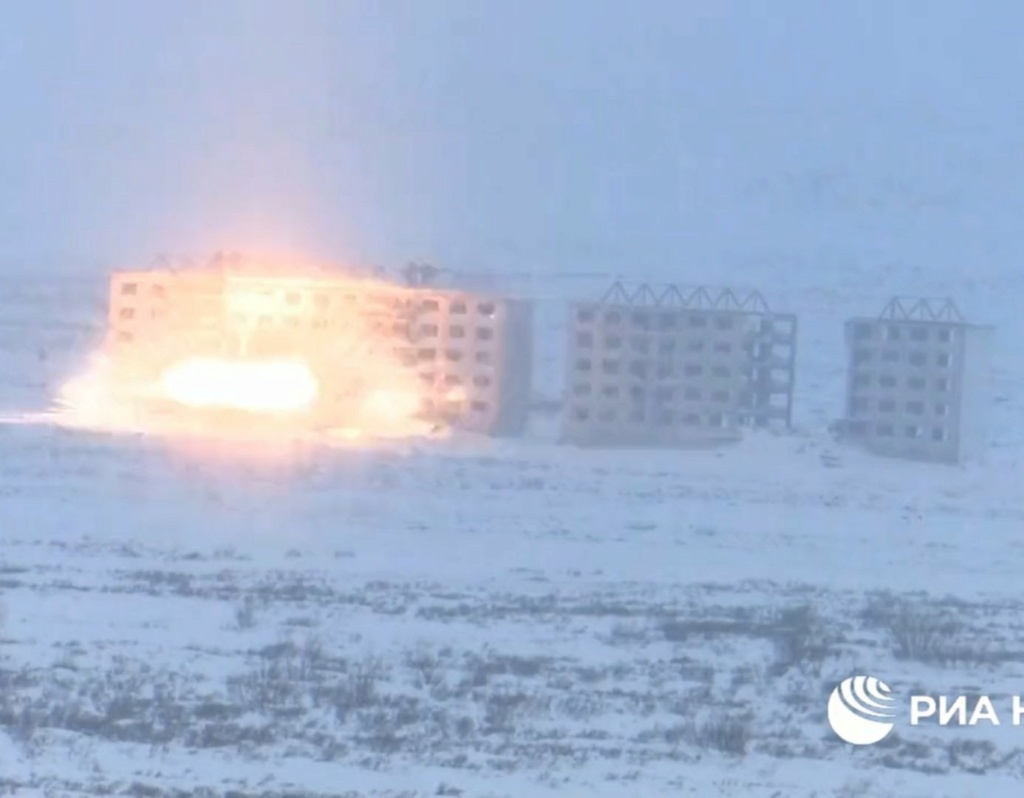 Looks like it impacted right in front of the building, it would of been nice to see it impact through the roof.

AMCXXL wrote:
These aircraft carrying Khinzal are called by the Ministry of Defense MiG-31I, although on other occasions they were called MiG-31IK

In this case the two, Nº30 and Nº31, are of type 8, that is to say with the installation to be able to launch anti-satellite missiles

Given the blue color of the tail number, these are for a new squad, and the base from which they have left is in the North although it is not well distinguished, so I would bet that in Olenogorsk another mixed regiment will be formed with a squad of MiG-31I(K) and another of Tu-22M3 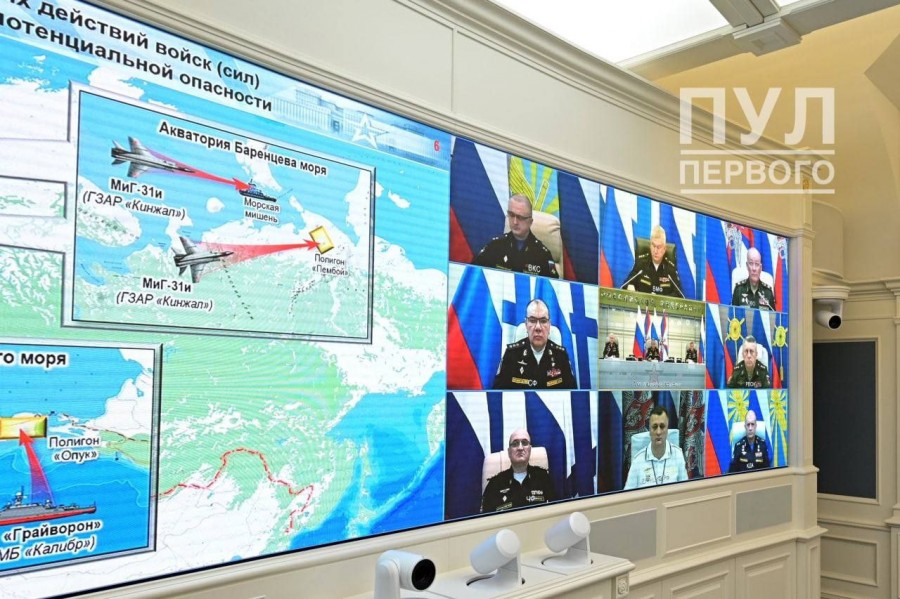 Could also be that they will be like the Il-78 and A-50 regiments. Home based in Savasleyka but deployed where needed.

So, curious about the impact velocity of the Kinzhal in that recent video, I decided to measure it, and, although there are a lot of unknowns in this scenario, the results seem kind of underwhelming.

Ballpark numbers, here, but the average building story is 2.5 metres, the video is shot in 24fps, the missile moves approximately 15 metres in 1 frame. (15x24) metres in a second, 360m/s. Speed of sound is ~340m/s.
It's just barely supersonic in terminal phase.

EDIT:
- Given the nature of the still frame with zero references, it is entirely possible that the speed of the video was slowed down to some arbitrary point up until the first frame of impact, then played back at normal speed to capture the realistic smoke propagation. But that seems like an odd loop to jump through.

What matter is the speed in the interception zone of enemy AD systems.

The more it travels inside the atmosphere the more it looses speed. So the minimal speed will be at impact.

But your number should be wrong. I've such video of harpoon that are almost mach 1 missiles and you can clearly see the missile. In this video you see nothing but the impact.

Keep in mind that speed is an important factor so they probably have made some changes on the video before posting it. Russians are good at it.

magnumcromagnon wrote:
Looks like it impacted right in front of the building, it would of been nice to see it impact through the roof.

We don't know what the actual target point was but likely it was in front of the building as it is probably that they would want to keep the buildings standing to use as a target again. Also it might lead people to think that it missed

A bit like having a cross in the middle of a field but more realistic.

Dont trust them showing actual explosions of the missiles they show. I have frequently seen them use video of alternatives. For example one of the classic ones is showing this iskander but using the kh-35 impact j
Instead. Also seen the same examples with kh-101 missiles. Remember even video of these advanced missiles impacting targets is most likely extremely classified as important data can be drawn just as you showed

Anyways as I said the thing is hypersonic and the momentum it carries means it stays hypersonic/high supersonic on impact. Same with zircon. It ejects the scramjet intake before it dives on target but it is sti hypersonic as it hits a target.

So what is the west worried about then... they could have soldiers standing on the decks of their carriers with Stingers to shoot down Zircons if that is the case...

Most anti-ballistic missile systems have dead zones of a few km when the interceptor is in its boost phase and could do minimal course corrections. When the missile enters that dead zone while its just supersonic it doesn't really matter. Also some Iskanders are to be fitted with conventional bunker busting warheads which has to stay rigid during penetration. They can't be super fast or the impact would crush the warhead before it reaches the target depth.

The list of aircraft participating in the Victory Parade over Red Square on May 9 includes four MiG-31Is. The novelty may turn out to be a "space" modification of a high-altitude fighter-interceptor.

The flight plan of the MiG-31I was published by the RF Ministry of Defense and its official newspaper Krasnaya Zvezda . The four interceptors make up group No. 11 of the air parade.

It can be assumed that this is a modification of the MiG-31I Ishim, designed to launch small satellites into orbit and based on the anti-satellite version of the MiG-31D.

In 1997, the Mikoyan Design Bureau began developing a system for launching spacecraft into low Earth orbit using a modified MiG-31 high-altitude interceptor. The three-stage launch vehicle was planned to be launched from the anti-satellite version of the MiG-31D, flying at an altitude of 17 kilometers at a speed of 3,000 km/h. A massive launch vehicle is suspended between the engine nacelles - like the anti-satellite 79M6 "Contact". Both missiles were created in the Design Bureau "Vympel".

The complex was named MiG-31I "Ishim". It allows launching vehicles weighing up to 160 kilograms into an orbit with a height of 600 km.

I could be wrong but some time ago it was mentioned that the MiG-31I is capable of launching Kinzhal and ASAT/sat carrier missiles.
Isos

Hole wrote:I could be wrong but some time ago it was mentioned that the MiG-31I is capable of launching Kinzhal and ASAT/sat carrier missiles.

Is it ? For me it was always two different aircraft that can't use both missiles.
Hole

It was mentioned during the strategic war games a few month ago by one of the members here. There were Putin and Shoigu looking at some screen were a few MiG-31I or K could be seen (as grafic).

What are the odds that MiG-31M Super Foxhound is constructed in small numbers to test MiG-41 components on it?
caveat emptor

Where do you see K version on this sheet?  I can only see regular, BM and I version.

Is it ? For me it was always two different aircraft that can't use both missiles.

It wouldn't make a lot of sense to use two different aircraft for fundamentally the same job... ie long range communications systems to receive target data, and the ability to fly high and fast with a heavy payload under its belly.

Whether it is Kinzhal or an anti satellite weapon both would benefit from getting the the highest flight speed for launch and the highest altitude too... both are carried under the belly of the aircraft... neither aircraft could possibly spot their targets with their own radar... the ship target 2,000km away would be hidden by the curve of the earth and for a satellite target its speed means when the weapon is launched the target might be thousands and thousands of kms away too and as a satellite target it might be tiny.


What are the odds that MiG-31M Super Foxhound is constructed in small numbers to test MiG-41 components on it?

Likely quite low in the sense that the MiG-31M that was created would now be totally out of date... the R-37M missile already has a replacement on its way called object 815 or something, and pretty much most of the design will be modified with perhaps transitional engines and equipment... maybe even test wing mounted long wave radar, a very much upgraded IIR system, and perhaps even a new generation radar set.

It will very much be like the difference between the Su-27M which was called Su-35 at the time, but has very little to do with the actual Su-35 developed rather later will all new systems and equipment and engines etc etc.

They will likely build a transitional aircraft even just to test new technology for the next aircraft that can be installed on the current MiG-31 fleet as an upgrade and nation wide test, but the MiG-41 will get the good stuff probably with a complete revision of the airframe shape and design.

Most interesting thing in this MiG-31 Kinzhal prepared for May 9th parade in Moscow is this sign, the coat of arms of the Russian Long Range Aviation. It confirms previous speculations that the Kinzhals are subordinate to the Long Range Aviation Command. pic.twitter.com/kzreZ3ZRnQ