GDANSK, August 30 (RIA Novosti) - The Belarusian Defense Ministry has confirmed the deaths of two Air Force pilots in a fighter jet crash at an air show in central Poland on Sunday.

The Belarusian Su-27 Flanker fighter crashed while performing aerobatic maneuvers as part of the Radom Air Show. Polish TV channels showed the jet performing a stunt before disappearing behind trees.

According to preliminary data, the plane went down after a bird got caught in the engine.

"The pilots guided the plane away from the populated area without ejecting, and at the cost of their own lives, prevented more severe consequences," the spokesman told Belta.

Two weeks ago during preparations for the MAKS-2009 air show outside Moscow, two Su-27 planes collided, killing one of the pilots.

The Flanker family are just dropping like flies this year. RIP to the pilot.
Admin

Guest status in Poland Su-27UBM Air Byelorussia was insured only for 900 thousand dollars. This, as reported by Interfax, said Director General of Belarusian insurance company Promtransinvest Love Simonchik. "Unfortunately, a crashed fighter was not insured for the full amount" - the source said.

Note that according to the site airport, the cost of the Su-27 is about 35 million.

Simonchik also reported that the insurer combat aircraft by the Ministry of Defense of Belarus, and the payment of compensation to be held within ten days after the representatives of the companies act. They are currently working on the crash site. Each of the dead pilots of the Belarusian Air Force, according to the head "Promtransinvest", was insured for 15 thousand dollars.

Belarus fighter aircraft crashed on Aug. 30, 2009 at an air show in Radom Poland during a demonstration flight. According to the military department of Belarus, the cause of the disaster might hit a bird in the engine intake, and the pilots managed to eject from the fact that the aircraft was taken away far away from the settlement.

However, as noted by Polish experts, quoted by local media, the pilots could make a mistake, too late to begin the maneuver at low altitude. Among other reasons cited the unreliability of the aircraft, because Belarusian Su-27 is significantly different from the modern versions that are released for other countries.

According to the military department of Belarus, piloted the aircraft officers have sufficient experience. Thus, the deputy commander of the Western tactical command of the Air Force and Air Defense Forces, Colonel Alexander Marfitsky had about 2700 flying hours. However, as noted in an interview with Komsomolskaya Pravda in Belarus "his daughter, in a foreign air show for the first time an officer was involved.

No word has being said about Belarus despite being most natural Russian ally.

As I read Belarus has in recently get first TOR-M2 battery with another one going its way this year also.

As integrated as part of CIS it received 4 batteries/regiments (??) of S-300.

Its airforce is outdated and Su-24 is being abandoned.

Yet it announced procurement of S-400/Iskander/YAK-130 and as part of a CSTO it should get them at reduced price and with batter characteristic that those of the export one.

Yet here is one interesting part.

Hopefully they actually pay for their hardware, I am tired of Lukashenko being subsidized by Russia.
SOC

They got four S-300PS batteries from Russia. Two went near Hrodna, two went near Brest.
Viktor

Well that right with the Polish border

With activation of S-400 in Kaliningrad and with this S-300 batteries in Poland Russia will have clear picture of everything that flying over Belarus and wider.
Viktor

As integrated as part of CIS it received 4 batteries/regiments (??) of S-300.

There was some time ago title on interfax military that I can not opet saying Russia will supply Belarus with S-300PMU1.

Do you know something about it.

Also Belarus was supposed to get second Tor-M2 battery.

Few pic from its exercise. 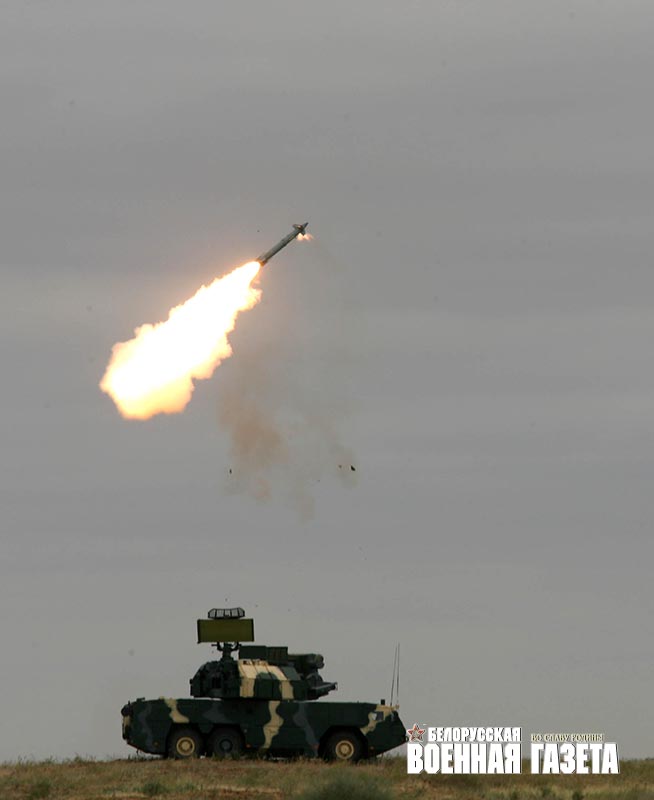 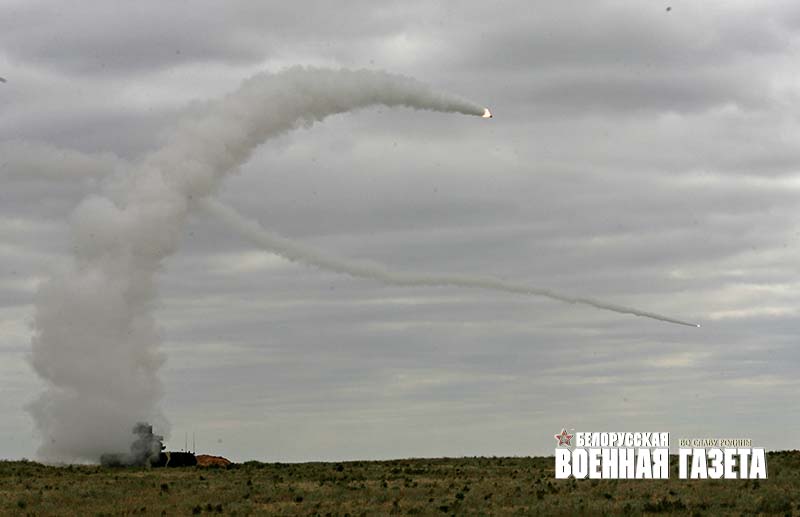 The Belorussian AF has stopped operating the Su-27 !!!!
Ogannisyan8887

The Belorussian AF has stopped operating the Su-27 !!!!

I doubt Belarus has money to spare to buy some Su-30 or anything of that kind.

I think it is left operating only Mig-29.
TR1

The Belorussian AF has stopped operating the Su-27 !!!!

Nice, 4 division (of S-300PMU1 most likely) are going to reinforce Belarus sky.

MINSK, April 23 - RIA Novosti. Russia in 2014 will supply to Belarus four divisions missile systems S-300, the head of the Defense Ministry of Russia Sergei Shoigu at a meeting with Belarusian President Alexander Lukashenko.

"In 2014, Russia, on your agreement with Russian President Vladimir Putin will deliver four divisions of S-300 to protect the air space," - said Shoigu.

He said that Russia and further suggests to consider issues needed to better protect their Belarusian colleagues. Presidents supported the exercises "West-2013".

"We're getting very active, and we hope that this will allow more time to check how much we are willing to jointly respond to the challenge, and that must also be done to ensure the security of our countries," - said Shoigu.

He also said that as part of the state union of Belarusian and Russian military strong relationship. Moreover, there is a joint program. In particular, the creation of regional air defense system, which should be reliable and thorough protection of the airspace and borders of the Union State. In addition, there is a great program for Military-Technical Cooperation, said Shoigu.

Further Russia plans to set up an airbase in Belarus

Russia plans to set up an air base in Belarus


"We started to consider a plan to establish a Russian airbase here with fighter planes. In 2013, the aircraft commander's office will create and deliver the first link-duty combat fighters," - said the head of the Defense Ministry of the Russian Federation Sergey Shoigu.


MINSK, April 23 - RIA Novosti. Russian plans to establish an air base in Belarus, the first link fighter aircraft to arrive there in 2013, said Tuesday the Russian Defense Minister Sergei Shoigu at a meeting with President of Belarus Alexander Lukashenko.

"We hope that in 2015 there will Aviation Regiment, which will serve to protect our borders. We began to consider the plan to create a Russian airbase here with fighter planes. In 2013, the aircraft commander's office will create and deliver the first link-duty combat fighters" - the minister said.

It is also quite interesting that besides unknown number of territorial PVO S-300, Belarus operates and S-300V.

It has been pictured on a parade year or two ago. 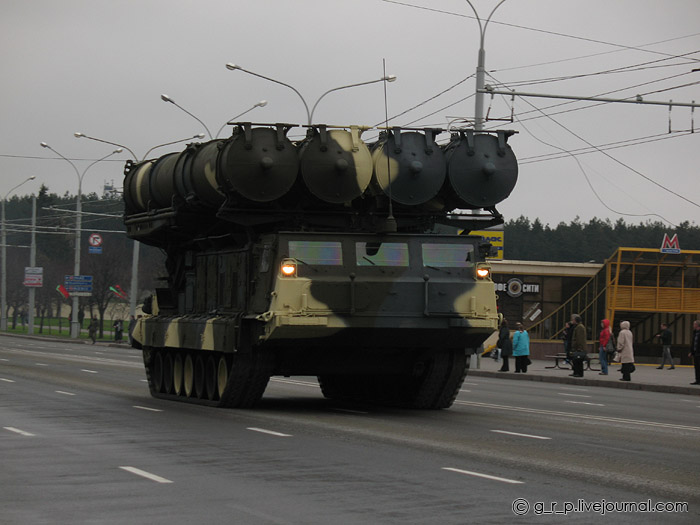 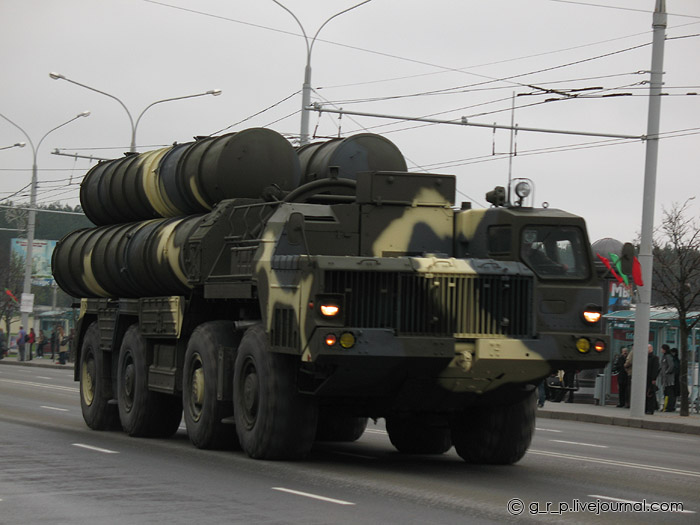 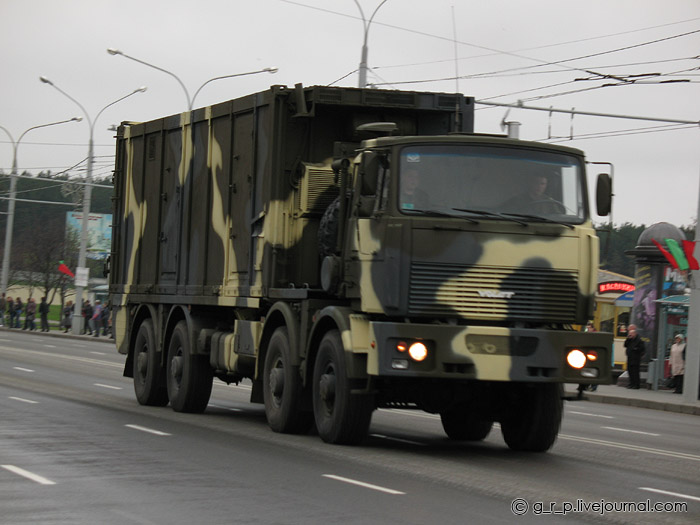 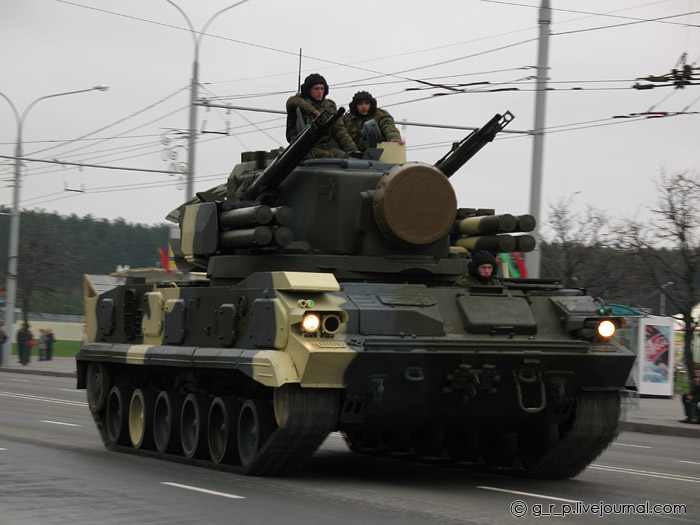 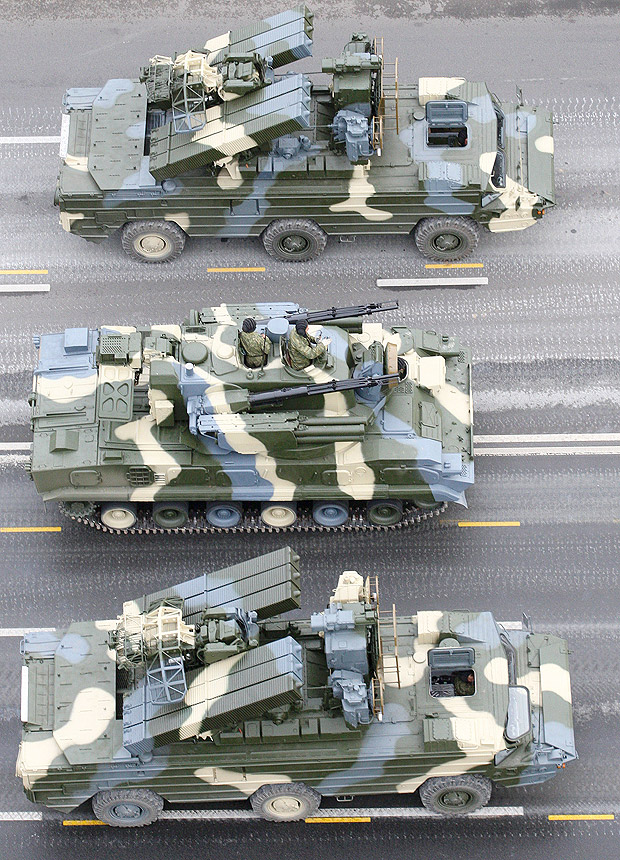 This Belarus acquirement of 20 Russian planes has been a long awaited deal. Well we will see how this goes on.

MIG-35 would be excellent choice but MIG-29M would be good enough too.

It is also interesting to note one sentence I have underlined below where Lukashenko speaks about air defense. He notes that

Belarus has the most powerful air-defense in the west

and I suspect he is not kidding.

- There are some 2 regiments of S-300 with 1 more regiment coming in 2014.
- There are up to one whole brigade of S-300V system
- One battery of TOR-M2 system with another one coming this year

But there are also :

and Belarus modernization of those systems are often even better than Russian one.
Its command centers and radar systems are world class.


The head of Belarus noted, but to protect the borders of the country needs a Su-27 or MiG-29. At that Belarus is ready to modernize the Russian aircraft in its factories.


MINSK, April 26 - RIA Novosti. President of Belarus Alexander Lukashenko believes that the country needs a couple dozen of Su-27 and MiG-29 or the more modern aircraft.
"Today I have a couple of dozen of Su-27, MiG-29. I need these or the more modern aircraft to ensure the inviolability of borders" - Lukashenko said on Friday, commenting on the recent meeting with Defense Minister Sergei Shoigu.


He noted that the form of Russian aircraft deliveries to Belarus will be the subject of negotiations with the Russian Federation. "The base is to be, or we will put in the existing parts of the fighter planes, this issue is being discussed," - said the president.

According to him, Belarus is ready to modernize the Russian aircraft in its factories. He noted that the issue of modernizing the factories of Belarus, including in Baranovichi, has already been discussed. "I said 'yes', we will have to upgrade the aircraft, if you have such a desire. This is a new theme," - said Lukashenko.

Another interesting article which reveals that 4 division of S-300 system which Belarus will get in 2014 are from Russian stock.

Lukashenko: Russian S-300 are designed to ensure the defense of Belarus


Russia in 2014 will supply to Belarus four divisions missile systems S-300. Thus RF complements the Belarusian air defense of those means which are already in service.


MINSK, April 26 - RIA Novosti. supply Russian battalions of S-300 is not directed against anyone, said on Friday the President of Belarus Alexander Lukashenko.

Earlier it was reported that in 2014 Russia will supply to Belarus four divisions missile systems S-300 . On Tuesday told Russian Defense Minister Sergei Shoigu at a meeting with Belarusian President Alexander Lukashenko.

"They (Russia) will put us to the C-300. They are there in reserve, are not involved, and we need them. They are not directed against anyone, this is a purely defensive weapon," - said Lukashenko, commenting on the meeting with Shoigu.


"I am very glad that Russia has finally made a step towards us and put these complexes," - he added. Lukashenka also said that the Russian systems are already in service with the Belarusian army.

He noted that the issue of supply of these kits was for several years . "That I have asked and demanded for a long time, seven years ago, that we should put these complexes. And finally under the Minister I distinctly said" yes ", we will supply the several battalions of S-300," - said Lukashenko. 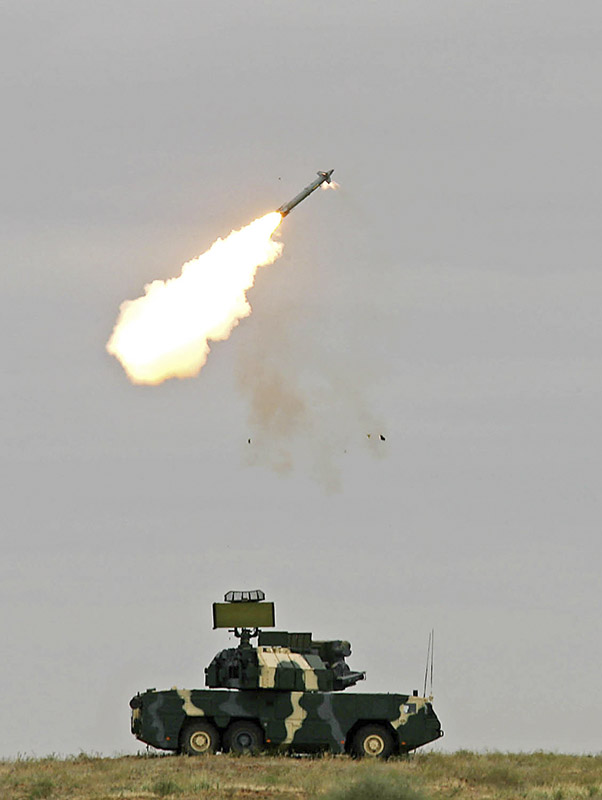 in the article it is said that the unit armed with Su-27 has been dissolved and only MiG-29 left as Belorussian fighters: 'После этого в составе 61-й белорусской истребительной авиабазы остались только две эскадрильи, оснащенные истребителями МиГ-29, которые и представляют собой всю истребительную авиацию республики.' (after that only two squadrons remained in 61th Belorussian fighter air base, armed with MiG 29 fighters, which contains all fighters' air force of the republic). Su-27 was being offered for sale.
What is interesting Su-27 are considered as replacement for older MiG-23 fighters, so if MiG 29 left only there's a gap. Only lack of funds can explain this decision.
GarryB

What is interesting Su-27 are considered as replacement for older MiG-23 fighters, so if MiG 29 left only there's a gap. Only lack of funds can explain this decision.

Not surprising... the Mig-23 had very good flight range and was used as a longer ranged interceptor with the Mig-21 operating in the shorter range mode.

But unfortunately 2nd and 3rd generation soviet fighters had pathetic maneuverability, for example the MiG-23 had a max G limit of only 6,5G, same as the F111(!)

No, the MiG-23ML already had a load limit of 8 Gs, not to even speak of MLD.
GarryB

Yet with helmet mounted sights and high off boresight AAMs like R-73 and R-27T and R-27ET they could defeat pretty much any western fighter.


But unfortunately 2nd and 3rd generation soviet fighters had pathetic maneuverability, for example the MiG-23 had a max G limit of only 6,5G, same as the F111(!)

You do say some funny things sometimes my friend... do you mean they lacked manouver capability like the Mig-17 and Mig-19 and Mig-21 compared with F-4 Phantoms or F-105s and F-104s?
KomissarBojanchev

I agree with what you said, but if soviet fighters were all mainly designed for interceptions how would they provide long range  and duration air superiority, escort and air cover missions?
GarryB 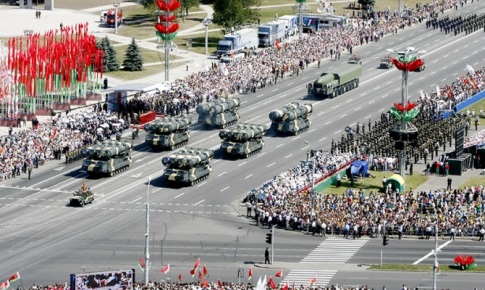 What's the thing behind the S-300Vs?
Austin