In his book Su-25 Yefim Gordon gives the numbers als 44 single-seaters and 6 twin-seaters. And 18 aircraft were sold to Peru in 1999.
d_taddei2

Looks like Belarus is happy with Russia upgrading it's T-72 and Belarus providing sights it ties in with previous posts but what is interesting is they are arming their yak-130 with talisman and previous pics of them armed suggests Belarus are not just going to use them as trainers but as multi role combat aircraft. Can't blame them considering their current Air Force.

25.06.2019
Within the framework of the ARMY 2019 International Military and Technical Forum, the Belarusian military delegation met with representatives of Uralvagonzavod Research and Production Corporation. The meeting resulted in the signing of a contract to modernise 11 T-72B tanks to the level of T-72B3 in 2019-2020.

Uralvagonzavod has been successfully upgrading T-72B tanks for the Belarusian army since 2015 under the Treaty on the Development of Military-Technical Cooperation between Belarus and Russia. The T-72B3 tanks equipped with the Belarusian-made Sosna-U sight surpass all foreign counterparts in the cost-effectiveness criterion by at least two times.

In addition, a contract was signed with Irkut Corporation to retrofit the Yak-130 aircraft for the installation of the Belarusian-made Talisman airborne defensive suite.

According to the State Military Industrial Committee (Goskomvoenprom) of Belarus, on February 27, 2020, according to the results of flight tests of the 9M318 anti-aircraft guided missile (SAM) in the Polessky section, Chairman of the Goskomvoenprom industry Roman Golovchenko held a briefing with representatives of the Belarusian media.

Journalists were informed about the goals and objectives, the stages of flight tests of prototypes of missiles and checking the parameters of their functioning, as well as the test results.

According to Roman Golovchenko, Chairman of the Goskomvoenprom industry, flight tests of prototypes of the 9M318 anti-aircraft guided missile “Buk MB-2”, developed on an initiative basis by the OKB TSP research and production society, which is part of the Goskomvoenprom system, involving calculations from the Air Force and the air defense forces of the Armed Forces were carried out in the period from February 17 to February 26, 2020 on a site within the boundaries of the Stolin district of the Brest region, the Zhitkovichi and Lelchitsa regions of the Gomel region your aviation training ground "Polessky").

“This is the first stage and the main test of the operability of the main missile defense systems. In fact, these were the first launches, as we also call them, design ones. The designer checks the characteristics laid down by the calculation method. This is a rather important stage, because it was preceded by serious work on the ground - on test benches, during modeling, and calculations, ”said the head of the Goskomvoenprom.

According to Roman Golovchenko, flight tests became the next stage in the development of rocket science in the Republic of Belarus. “This is not only military, but also technological security. And when the President of Belarus gave the order on the creation and development of rocket science, it was understood that we became the owners of completely new technologies by joining the club of the so-called missile countries, the number of which is in the top ten, therefore this is also an important element of independence, not only military but also technological, ... self-reliance is the key to our security, ”said the Chairman of the Goskomvoenprom.

9M318 missiles were developed according to modern technologies, taking into account world technological achievements in the field of rocket science. It implements a unique technology for the manufacture of SAM elements using composite materials. With the advent of a new missile, the range of destruction of air targets will increase to 70 kilometers.

A feature of the rocket is the presence of an active homing head, which allows you to hit targets, including those with a low reflective surface, with a higher probability, as well as free the target air defense channel without waiting for the target to hit.

9M318 missiles are designed to destroy high-speed maneuvering aerodynamic targets, tactical ballistic, cruise, aircraft and anti-ship missiles and helicopters (including those in hover mode) in conditions of intense electronic countermeasures, as well as surface and radio-contrast ground targets.

To ensure the management of flight tests and the safety of using airspace, control was organized from a specially created point using the ACS of the Air Force and the Bor-1M1P air defense forces.

Radar control of aircraft flights during flight tests of missiles was carried out using radars (radar) Vostok-D and 19ZH6M from the Air Force and Air Defense Forces with the provision of radar information to the control point of the flight test director, as well as using in the position area the new radar-150 developed at NPOO OKB TSP.

In order to ensure the safety of flight tests, all the necessary measures were planned, which were fully implemented. In particular, a safety zone was defined, which is a parallelepiped with sides of 35 km per 10 km and a height of 6 km. Control was established and a temporary regime for the use of airspace was established with a complete ban on flights in the area of ​​flight tests. Directly in the prototypes of missiles, the warhead was not installed. In addition, four independent systems were introduced, providing the issuance of a command to the executive device for the self-liquidation of missiles in case of emergency.

Igor Demidenko, First Deputy Chairman of the Goskomvoenprom Industry (Flight Test Manager), informed journalists about the tasks to be solved during each phase of flight testing of prototype rocket launchers.

According to Igor Demidenko, at the first stage, prototypes of rocket launchers were launched (February 19) to check the descent from the launcher and to perform a controlled flight, including checking the traction characteristics of the engine and the operation of the onboard equipment of the missiles, strength and aerodynamic characteristics of the airframe, and testing the system control for the withdrawal of missiles to the established flight path and the functioning of self-destruction systems.

At the second stage, on February 25, launches were carried out in order to verify the capture of the homing head of a missile launcher of a designated air target - an unmanned aerial vehicle (UAV) of the type “Golden Eagle VM”. In this case, the launch was carried out without damaging the UAV. It was tested the development of the control system for the withdrawal of missiles to the established flight path, as well as the management of missiles during the entire flight, the collection and transmission of telemetry data by its equipment to the control center.

“The systems for the capture, guidance and self-liquidation of missiles worked normally, the results of the checks of all parameters are positive,” the First Deputy Chairman of the State Military Commissariat of Industry emphasized.

Summing up the general results of flight tests of prototypes of missiles, the Chairman of the Goskomvoenprom noted that the results of long-term work, including theoretical, production and testing measures, confirmed the correctness of the chosen path.

“The set test goals have been achieved. Already, it can be stated that the Republic of Belarus has its own anti-aircraft guided missile with unique characteristics and the highest degree of localization, developed by the forces of the OKB TSP scientific-production society, which is part of the Goskomvoenprom, and manufactured by the enterprises of the system of the State Military-Industrial Committee of the Republic of Belarus, ”emphasized attention to the head of the State Military-Industrial Commission.

Launches of the 9M318 anti-aircraft guided missile with a warhead based on the target situation can take place at the end of 2020.

“For the time being, we are counting on the end of 2020, but this will depend on the results of processing the data that were obtained during the first flight tests - there are a lot of them. We need to analyze everything, calculate, see how all the on-board systems work, make corrections. Based on this, the deadlines for the completion of the entire development may be adjusted, ”said the head of the State Military Industrial Commission.


On the bmpd side, we recall that the Belarusian company NPOOO OKB TSP demonstrated the Buk-MB3K medium-range anti-aircraft missile system developed under its leading role (referred to above as Buk-MB2) at a defense MILEX-2019 Industrial Exhibition.

The complex is based on a wheeled chassis MZKT-692250 (8x8). For this SAM, a new radar station with a phased array was developed, a new optoelectronic target detection and tracking system, including a laser rangefinder, a thermal imager and an optical target detection and tracking channel, as well as the creation of new 9M318 and 9M38MB anti-aircraft guided missiles, which were actually modified clones of Russian missiles 9M317 and 9M38, respectively. The 9M318 missile differs from the "base" 9M317 mainly in the presence of an active homing radar.

The main declared characteristics of the Buk-M3BK air defense system:

The number of simultaneously fired targets - 6

During a training flight in Baranovichi, a training aircraft Yak-130 of the Belarusian Air Force crashed. One pilot reported killed.

Mi-8MTV-5-1 of the Armed Forces of the Republic of Belarus, with the President-S on-board defense system, UPK-23-250 gun containers and B-8B20A unguided missile blocks, as well as a TSL-1600 searchlight.

In total, the Belarusian side purchased 12 helicopters from the Russian Federation. The helicopters were produced at the Kazan Helicopter Plant 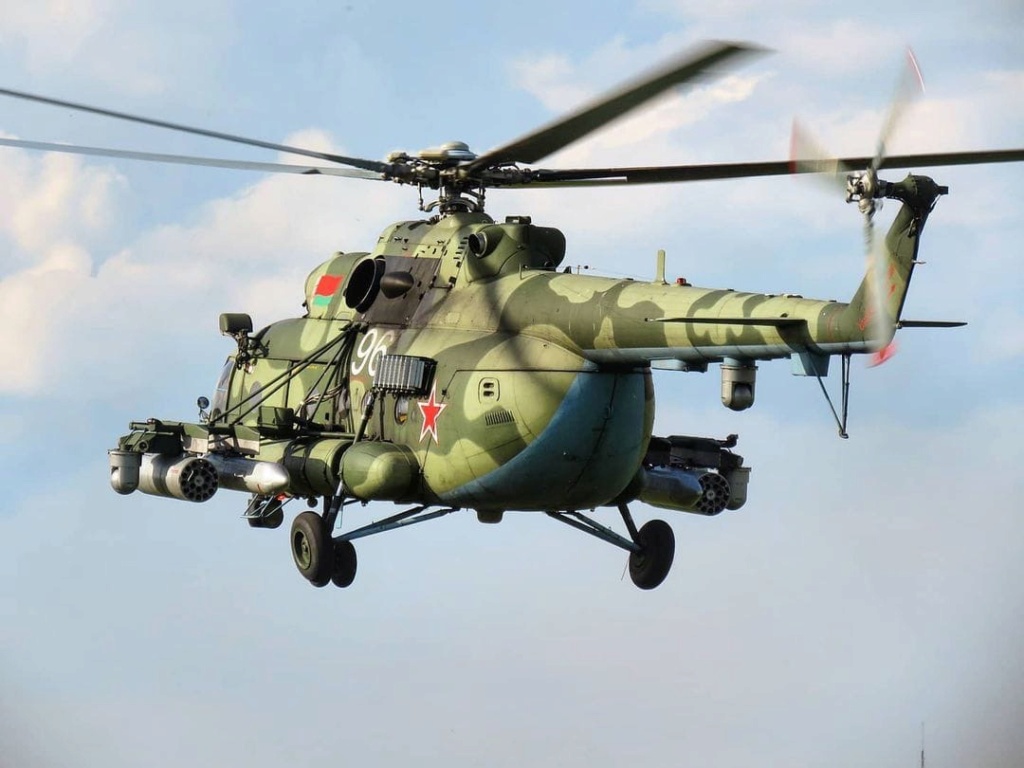