PARIS - The French Navy has awarded DCNS a five-year maintenance contract worth more than 60 million euros ($80 million) for five Lafayette class frigates, the naval systems company said in a Jan. 17 statement.
As part of DCNS’ contract with the French Navy, the Lafayette-class frigate Surcouf, above, will undergo a major overhaul in dry dock at the end of March. (Wikipedia)

Under the contract signed Dec. 17, which runs from 2011-15, DCNS will be responsible for the maintenance in operational condition of the Aconit, Courbet, Guépratte, Lafayette and Surcouf frigates at the Toulon naval base, the company said.

The Surcouf will be the first to undergo a major overhaul in dry dock at the end of March, a DCNS spokeswoman said.

"The maintenance in operational condition of these frigates requires industrial resources and know-how that DCNS can offer in a complete manner to the Navy," said Thierry Kalanquin, director of services at DCNS.

The contract was put out to tender, with French companies STX France and CNNMO understood to have taken part in the bidding.

DCNS will assign an area of shipyard and 40 specialist staff dedicated to the Lafayette contract, rising to 150 personnel at peak periods of activity, the spokeswoman said. Five major overhauls and 18 intermediate services are included in the deal. DCNS will be able to work on one ship in dry dock, and one ship moored at the quayside.

The Navy chief of staff, Adm. Pierre-François Forissier, has said the readiness rate of surface ships and submarines has risen to an average 73 percent compared to below 60 percent 15 years ago, lifted by the maintenance contracts signed with industry.

The Lafayette is a 125-meter, 3,600-ton patrol and escort frigate, with a crew of 153 and armed with a 100mm canon and two 20mm guns, eight Exocet MM-40 antiship missiles and a short range Crotale anti-air missile.

wow
the french weapons ,one of the most modernize one,
rafale is my favourite fighter......
Admin

ahmedfire wrote:wow
the french weapons ,one of the most modernize one,
rafale is my favourite fighter......

It is the only navy comparable in tech to the USN.
Admin

Looks like a remake... better than the original IMO
Admin 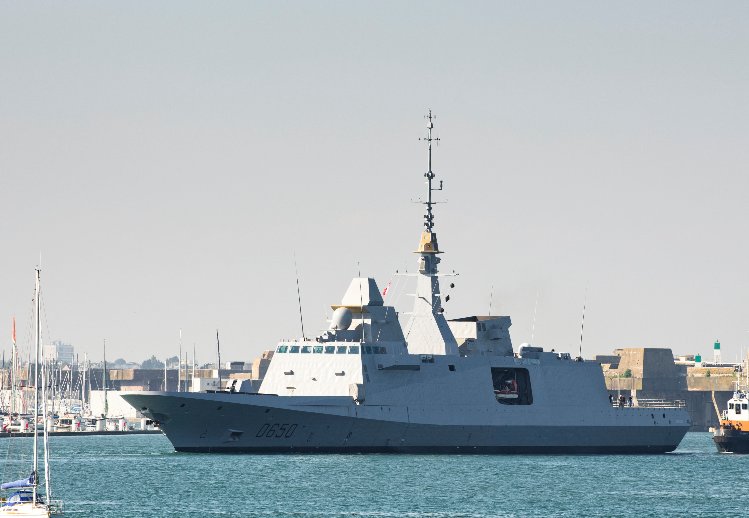 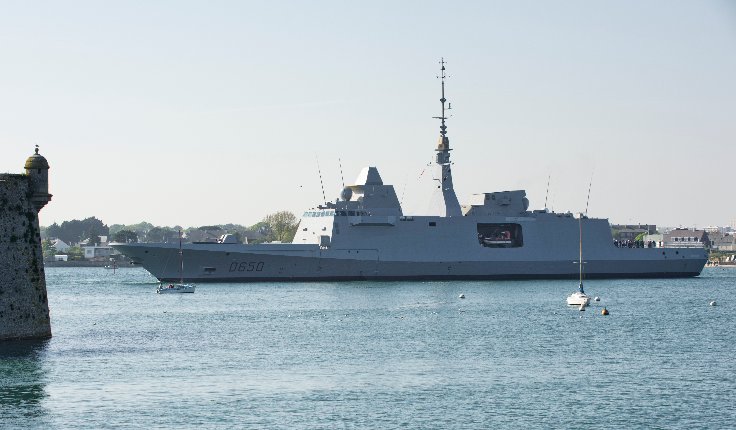 It is certainly a significant step up from Exocet.

Didn't see anything in that video that was amazing though... Tomahawks and Soviet equivalents have been doing that sort of thing for a while, and currently Brahmos and Club are still doing it but with higher speed end games.

I was under the impression that SCALP was going to be stealthy... the missile shown didn't look particularly stealthy to me... except of course the very low flight profile.
Admin

On April 4, 2012, the Navy and the Directorate General of Armaments (DGA) successfully performed, from the frigate Forbin , interception by the PAAMS (Principal Anti-Air Missile System) of a Coyote target drone simulating a maneuvering attack by a supersonic anti-ship missile flying at low altitude.

The firing of a highly technical, a first in Europe, demonstrates the ability of anti-aircraft system PAAMS to protect a carrier battle group against a particularly dangerous type of threat.

The launch of the target has taken place at the DGA site of the island of Levant (Var). After detection and tracking, the system PAAMS automatically engaged the target which was intercepted by a missile Aster 30. The entire sequence lasted a few tens of seconds.

Different flying objects were followed throughout their flight phase by means of the center of DGA missile tests Levant Island and Mount Coudon.

Wonder whether this was a performance test or a realistic test.

A performance test tests to see if it is possible for the system to engage a specific type of target like a supersonic sea skimmer.

A realistic test would involve a surprise attack from an unexpected direction.

Both are obviously useful and you need to do the first before you can attempt the second, but as shown in real combat just having systems that can shoot down something doesn't mean they will.

On paper the British ships should have been safe from air attack, the British even had the Exocet missile in service so it should not have been a surprise...
George1

The French Navy's Frégate Européen multi-mission (FREMM)-class frigate, Normandie, has successfully completed 50 combat-system trials off the Toulon coast, validating its performance prior to its delivery to the navy later this year.

Carried out in collaboration between DCNS, the French Navy, General Directorate for Armament (DGA) and OCCAR, the five-week trials involved integration of the vessel into several scenarios and all areas of warfare, including anti-aircraft and anti-submarine operations, among others.

In addition, the vessel also completed its platform trial and the first deck landing of the Caiman NH90 helicopter.

With the support of the FREMM Aquitaine, a final test was performed to validate the interoperability between two frigates.

Normandie successfully completed two initial testing phases in November 2012 and January 2013, in addition to the first of three sea trials in March.

DCNS has received a contract to build a total of 12 FREMM ships, including 11 for the French Navy and one for the Royal Moroccan Navy.

With a displacement capacity of 6,000t, the 142m-long Normandie frigate can cruise at 27k and has a range of 15k, while accommodating a crew of 145 with a complement crew of 108.
George1

French Marines and airmen practice evacuating a sinking NH90 helicopter in a simulator: 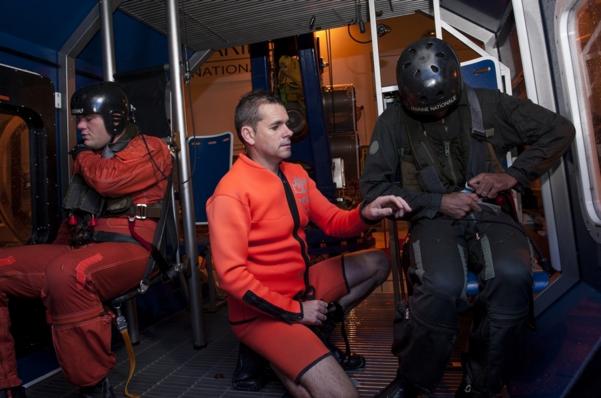 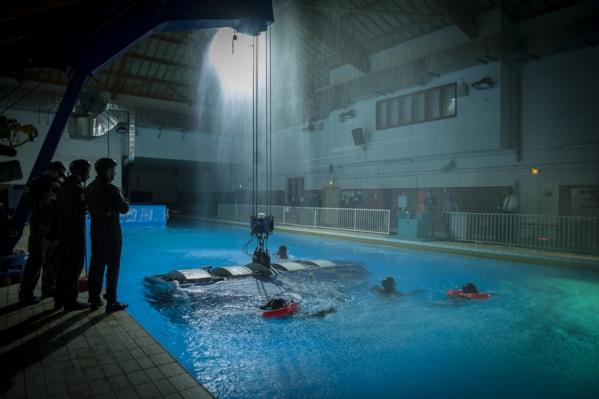 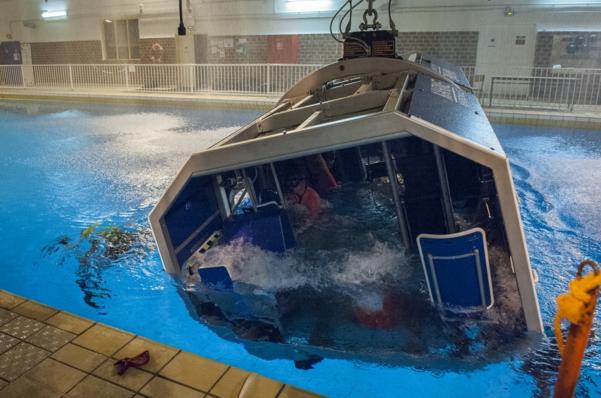 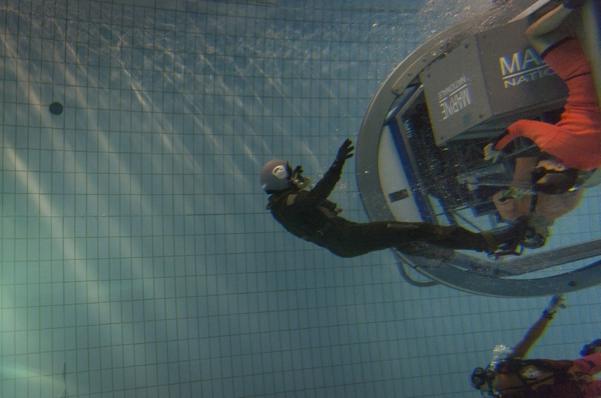 French shipyard CMN has just released a video showing its Ocean Eagle trimaran patrol vessel during sea trials in extreme weather conditions (Sea State 5). Thanks to its design, the Ocean Eagle 43 demonstrates exceptional stability. CMN confirmed in September 2013 the signing of a major export contract with Mozambique. The contract includes the delivery of three Ocean Eagle 43 trimaran patrol vessels, three HSI 32 interceptors and eighteen fishing vessels for a total of twenty-four ships. According to the French shipyard, The Ocean Eagle 43 is a revolutionary concept with exceptional performance designed to meet the needs of maritime surveillance and security. It is the result of a fruitful collaboration between CMN, naval architect Nigel Irens, ProLarge and SeaTeam Aviation companies, two small businesses specialized in logistics and operational projects at sea.

The Ocean Eagle 43 is a compact high-performance multifunction vessel that is suited to protect coastal areas, strategic offshore infrastructures. It can also conduct electronic warfare and intelligence missions through the use of 300 Kg class VTOL UAV (such as the SCHIEBEL S100 Camcopter). The first Ocean Eagle 43 is set to be delivered to the Navy of Mozambique in early 2016 following training of the crew. While the vessels for Mozambique will be delivered without weapons, the Ocean Eagle 43 may be fitted with self-defense capabilities consisting in a 20 mm or 30 mm remote weapons station plus two 12.7 mm machine guns with 360° coverage. A ramp at the stern allows the rapid deployment and recovery of a 7 meters RHIB. 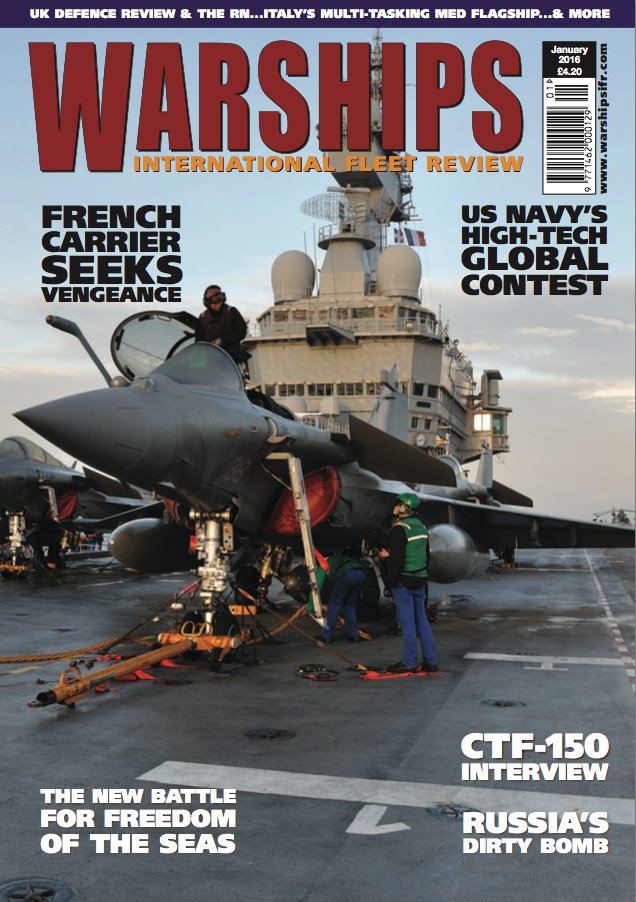 Jean-Dominique Merchet in his article «Porte-avions:? Va-t-on débarquer le groupe aérien», located in the French newspaper "Le Point", wonders what will become with the air group of the only French aircraft carrier Charles de Gaulle: left it in the Middle East and continue to strike at the "Islamic state", or return with it to Toulon. A source in the French Navy argues that there is no question, as the aircraft carrier aircraft may need to be on their way home for some time to patrol the waters not far from Libya.


1. The French Air Force seems to have difficulty in order to allocate more than 12 aircraft (six in Jordan and the United Arab Emirates) for the operation "Chammal" against the Islamic State. Although the French Government speaks of "strengthening the fight" against the IG, the future care of the aircraft carrier Charles de Gaulle with the theater will greatly reduce the number of French aircraft in the theater - from 38 to 12 units. And Air France will have a good reason to "borrow" from the Navy fighter Dassault Rafale M, which will operate from the ground airfields.

2. Since 2017 the aircraft carrier Charles de Gaulle will be decommissioned in the 18 months to carry out repairs in Toulon. At this time, carrier-based aircraft fleet French Navy can work together with the US Navy, but the General Staff of the French Armed Forces expects to use them with ground airfields for combat missions. Something similar happened in 2008 when the Navy Dassault Super Etendard attack aircraft were stationed at the airport of Kandahar (Afghanistan).

Third FREMM Delivered to the Navy

The Directorate General of Armaments (DGA) on March 16, 2016 authorized the hand-over of the frigate “Languedoc,” the third multi-mission frigate (FREMM) to be delivered to the Navy.

The FREMM program is managed by the Organisation for Joint Armaments Cooperation (OCCAR), in cooperation with Italy.

The new ship will continue the renewal of the French navy’s frigate component with eight ships that will form the backbone of the surface fleet. The FREMM, designed, developed and maintained by DCNS, will be the first European frigates to operate naval cruise missiles.

The FREMM frigates are stealthy vessels of a new generation, and are versatile, tough and flexible to use, with a high degree of automation and an optimized workforce to crew.

The first six frigates will be delivered to the Navy by mid-2019 and will conduct predominantly anti-submarine warfare missions, while the last two frigates, to be delivered in 2021 and 2022, will have a primary air-defense mission.

The multi-mission frigate program supports thousands of French employees. Until 2022, the achievement of FREMM will provide a very significant share of DCNS activities (mainly on its site of Lorient) and of many of its subcontractors, mostly SMEs.

Regarding export, two frigates have already been sold and delivered, respectively to Morocco and Egypt. Several other nations have expressed interest in the innovative concept of FREMM.

d'Enrecastaux is the first of three B2M vessels ordered in later 2013 from Kership, a joint venture between the Piriou shipyard and DCNS.

The vessels are being constructed to support sovereignty missions in the French overseas territories. They are designed to be able to conduct maritime surveillance, force projection, logistics, counter-trafficking and humanitarian assistance roles, among others. The 2,300 tonne B2M vessels have a crew of 20, can be armed with two 12.7x99 mm (.50 cal) machine guns, and have a maximum speed of 15 kt and an endurance of 30 days.

The home port of d'Entrecastaux will be Noumea in French Caledonia. The second ship, Bougainville , will be based in Papeete in French Polynesia with Champlain , the third vessel, to be based in Port des Galets in Reunion Island. The French Navy plans to have them sailing at least 200 days per year.

As part of an update to France's military planning law a decision was made in May 2015 to build a fourth B2M. The contract for its construction is expected to be signed in 2017, with the ship destined to be based in Fort de France, Martinique.
Sponsored content