French Armed Forces Minister Florence Parley announced the start of factory sea trials and the first test dive of the completed new type of Barracuda French Suffren nuclear submarine. According to French media reports, on the morning of April 27, the Suffren boat first sailed out of the arsenal of the French shipbuilding association Naval Group in Cherbourg, which was building it, and made the first test dive in the morning of April 28. 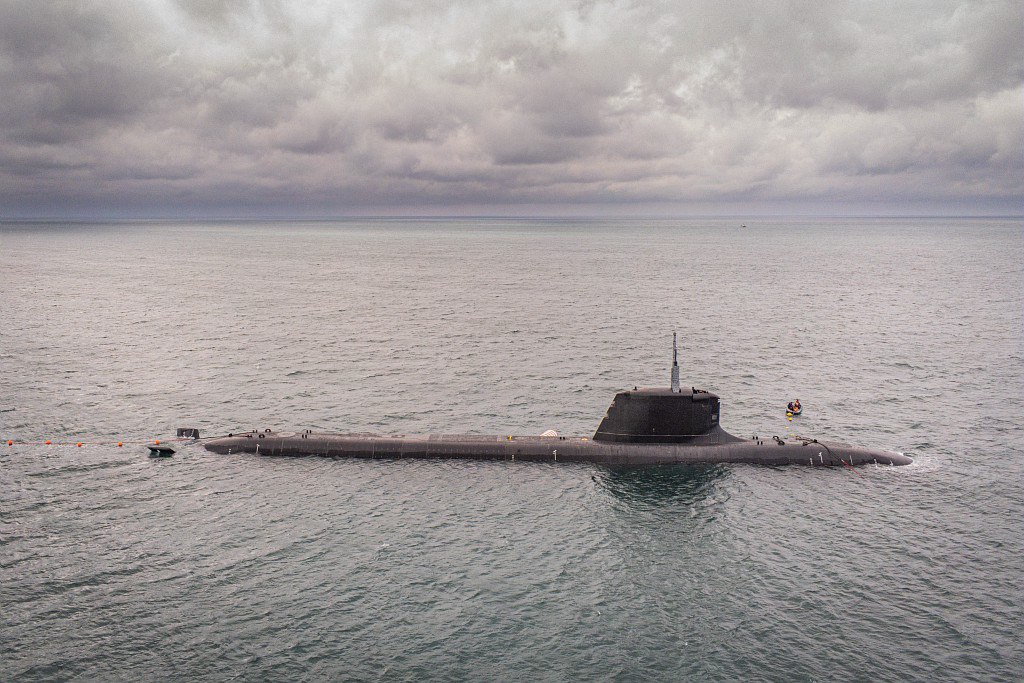 
It is reported that the start of Suffren factory trials was scheduled for early March, but was delayed due to technical reasons and quarantine measures due to the coronavirus pandemic. It was previously planned that the boat should be handed over to the French Navy in 2020, but now the final deadline is not carefully specified.

The construction of the Suffren nuclear submarine of the Barracuda type (building number Q 284) in the arsenal of the Naval Group in Cherbourg has been ongoing since 2007, undergoing numerous delays. The official ceremony of launching (actually withdrawing from the construction workshop) of the Suffren submarine took place on July 12, 2019, in fact, physical launching was carried out on August 1.

Four more boats of the Barracuda type (Duguay-Trouin, Tourville, De Grasse, Rubis) are in Cherbourg at various stages of construction, and the construction of the sixth Casabianca boat is also planned. These boats should replace the first six French nuclear submarines of the Rubis type as part of the French Navy. 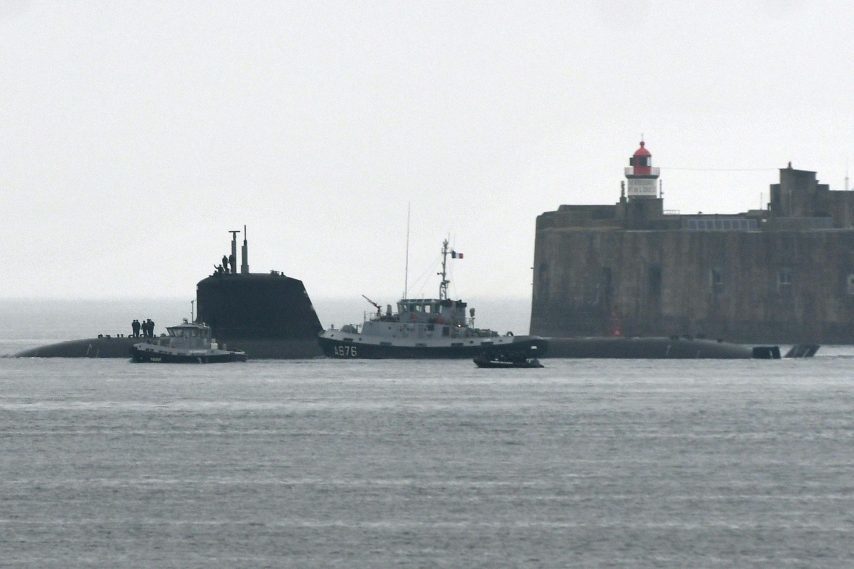 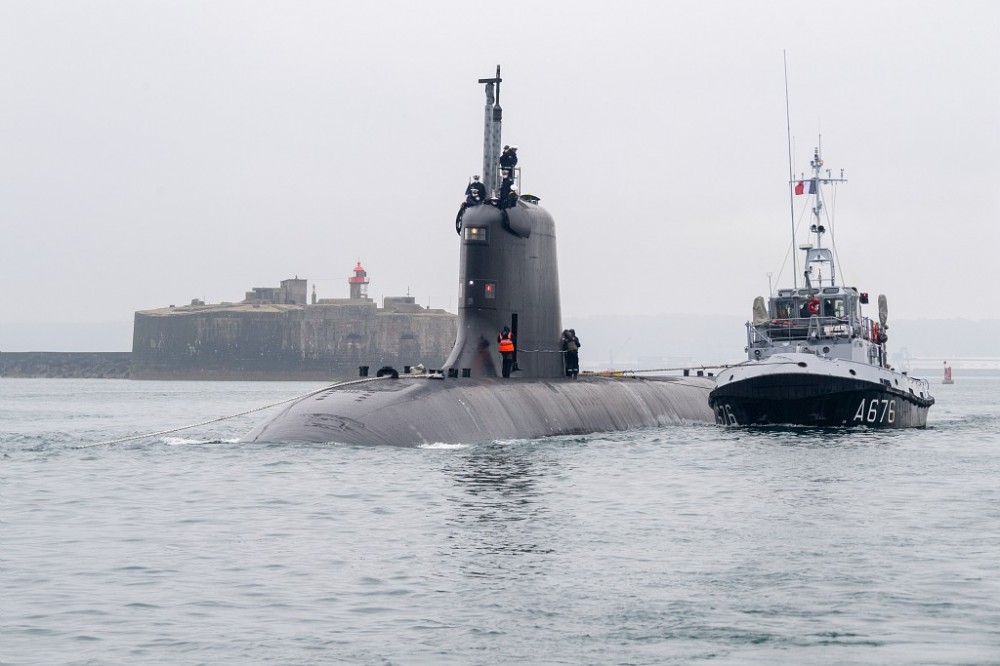 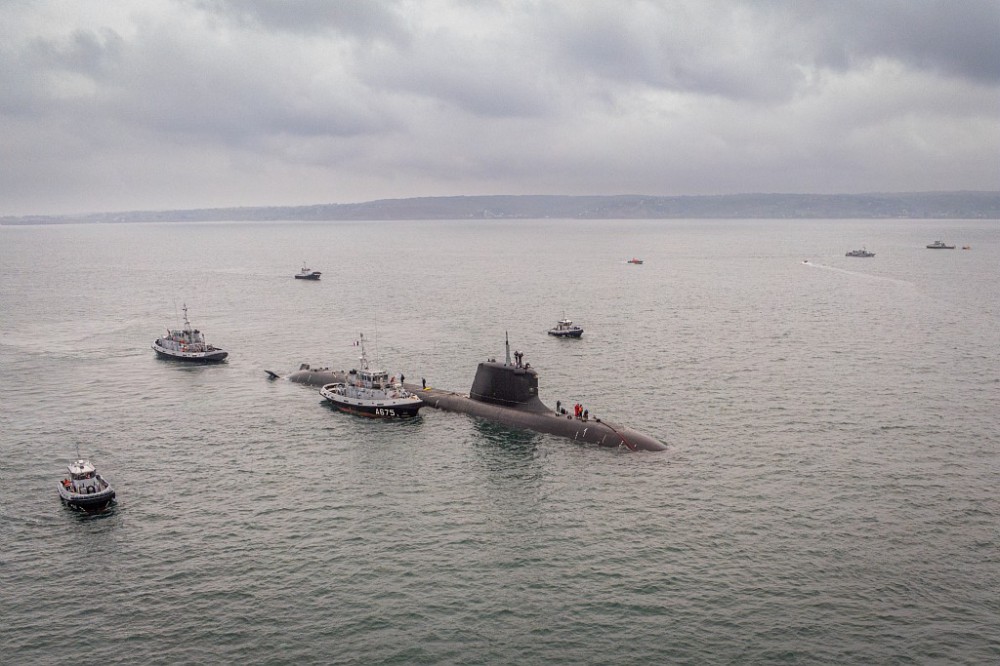 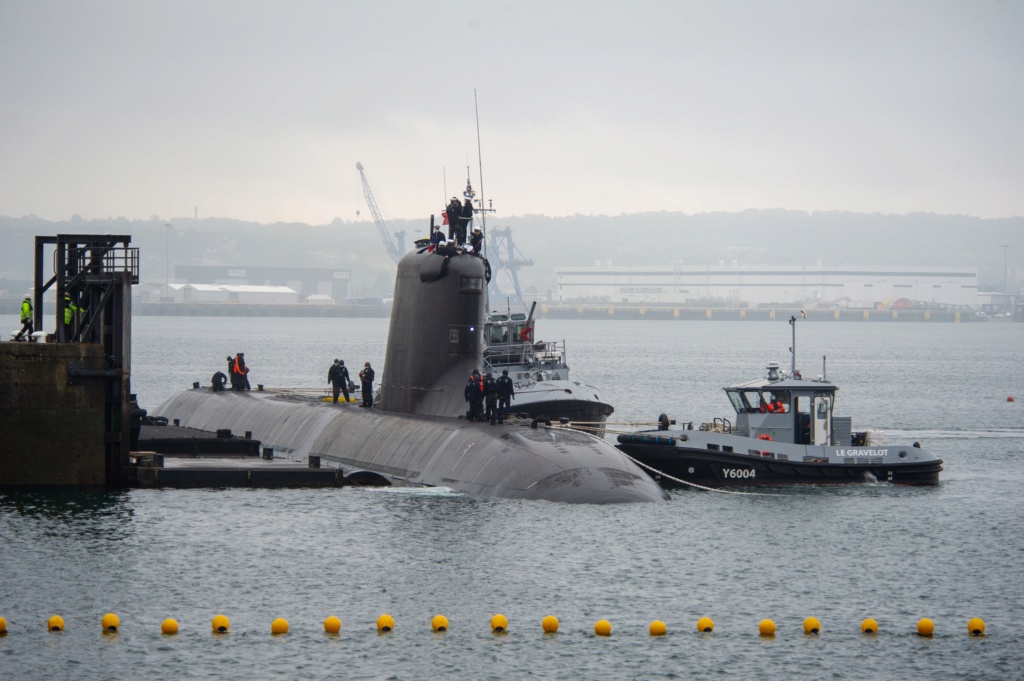 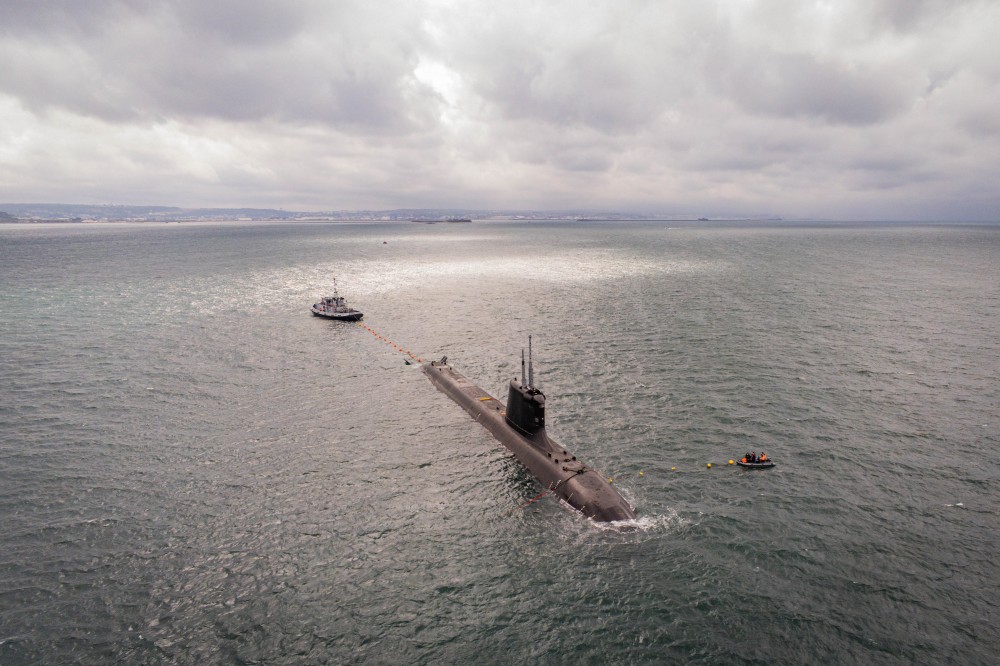 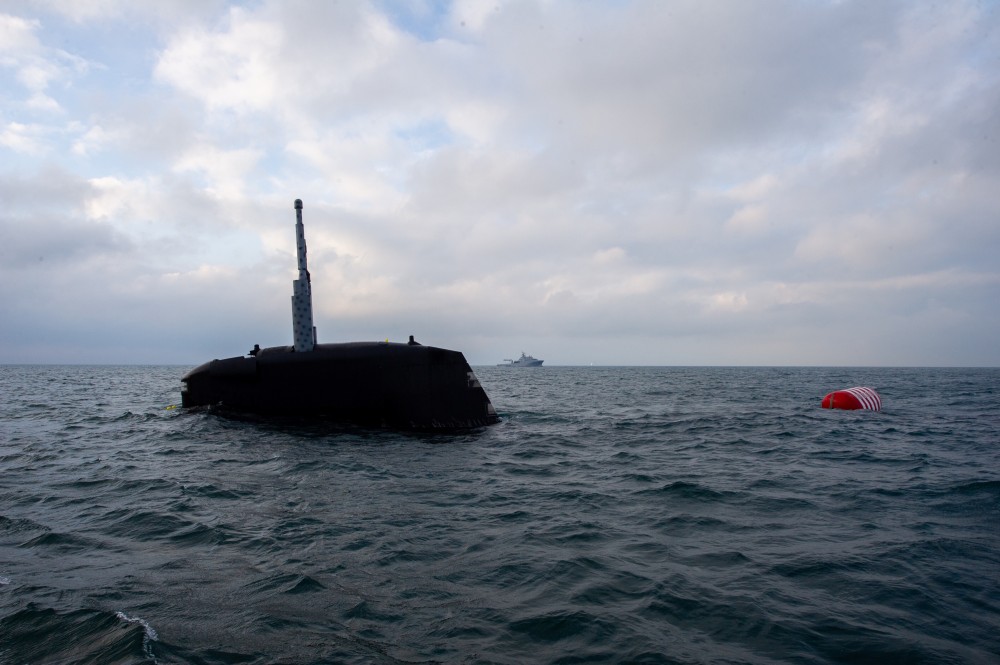 On May 18, 2020, at the largest French shipbuilding company Chantiers de l'Atlantique in Saint-Nazaire, the first steel cutting ceremony was held for the construction of the new generation integrated supply head ship BRF (Bâtiments Ravitailleurs de Force), called Jacques Chevallier, launched for the French Navy . The ceremony was attended by the Minister of Armed Forces of France Florence Parley and the Chief of Staff (Commander) of the French Navy, Admiral Christoph Prazouk. Official design image of a new-generation integrated supply ship type BRF (Bâtiments Ravitailleurs de Force) for the French Navy (s) French Navy


The lead ship was named in honor of Jacques Chevalier (1921 - 2009), who was the chief designer of the nuclear reactors of the first French nuclear submarines. At a ceremony on May 18, Minister Florence Parley announced that the next three ships of the BRF type would be named Jacques Stofkopff, Emile Bertin and Gustave Zédé .

Also at the ceremony, the Minister said that a new French aircraft carrier will be built at Chantiers de l'Atlantique, which will replace by 2038 Charles de Gaulle, an aircraft carrier currently in the French Navy .

Recall that in January 2019, the European defense procurement organization Organization for Joint Armament Co-operation (OCCAR) on behalf of the General Directorate of Arms (Direction Générale de l'Armement - DGA) of the French Armed Forces signed a contract with the French shipbuilding association Naval Group and a shipyard Chantiers de l'Atlantique (Saint-Nazaire) for the construction of four new generation integrated supply ships for the French Navy, such as the Bâtiments Ravitailleurs de Force (BRF, also uses the English language designation Logistic Support Ships - LSS). The contract value is 1.7 billion euros (including VAT). The contract also includes technical support for the ships for six years of their operation and training of personnel.

At the ceremony on May 18, it was reported that the lead shipJacques Chevallier type BRF (building number C35) should be completed by the end of 2022. The second ship is planned to be transferred to the fleet in 2025, the third - in 2027, and the last should be commissioned by the beginning of 2029.

As part of the French Navy, four BRF type ships are to replace four Durance type supply tankers built in the 1980s (one of which was decommissioned in 2015). Now the withdrawal of the remaining three tankers from the fleet is planned for 2024-2028.

The ships of the BRF type were ordered as part of a joint Franco-Italian program under the auspices of OCCAR, and their project was developed by the Italian shipbuilding association Fincantieri on the basis of the last built for the Italian fleet integrated supply ship Volcano(which is currently in the testing phase). Thus, the French Navy rejected the projects of the integrated supply ships promoted by the Naval Group under the code BRAVE (Batiment RAvitailleur d'Escadre), which at the time aroused interest in the Russian Navy. The program for the acquisition of four new integrated supply ships under the FLOTLOG code (Flotte Logistique) has been carried out by the French Navy since 2012. The Franco-Italian agreement on the selection of the Italian project for the ships FLOTLOG was signed in October 2018.

The choice of the French Navy in favor of the Italian project was another incentive for a partnership between the Naval Group and Fincantieri, which concluded in 2019 an agreement on the creation of a joint venture NAVIRIS. It is no accident that the construction of four BRF ships will be carried out at the Saint-Nazaire shipyard Chantiers de l'Atlantique (from 2008 to 2016 controlled by the South Korean group STX as STX France, and which also carried out the construction of two ships of the Mistral typeunder a contract with Russia). In September 2017, Fincantieri acquired a 50% (actually controlling) stake in Chantiers de l'Atlantique and returned its historical name to this shipyard (another 13% of the Saint-Nazaire shipyard are now owned by the Naval Group and 33% by the French state). This acquisition was an important step in the implementation of the BRF program on a French-Italian basis, and, possibly, following the implementation of this program, Fincantieri will become the full owner of the Saint-Nazaire shipyard. Apparently, Fincantieri will manufacture part of the hull sections for the BRF ships in its Italian enterprises.

Naval Group acts as a system integrator of ships of the BRF type and installer of equipment and weapons on them. The main electronic systems will be supplied by the Thales group.

The BRF ships will be large vessels with a total displacement of 31 thousand tons, a length of 194 m and a width of 27.4 m, with a double hull. The diesel-electric twin-shaft main power plant with a total capacity of 25 mW will include four diesel generators and two electric motors and will provide a full speed of 20 knots. Autonomy of 60 days. The crew of 130 people with the ability to take another 60. The armament will be two 40-mm artillery mounts BAE Systems Bofors Mk 4 (according to other sources, the Nexter Thales Rapidfire with a 40-mm gun 40CTAS). On the ship, one NH90 helicopter is constantly based in the hangar.

The BRF will be able to receive 13,000 cubic meters of fuel and liquid cargo and 1,500 tons of dry cargo, including containerized cargo. Four freight transfer stations are being installed on the go. The ship will also be equipped with repair shops and waste treatment plants. French Armed Forces Minister Florence Parley at the first steel cutting ceremony for the new generation BRF (Bâtiments Ravitailleurs de Force) integrated supply headquarters ship for the French Navy, which began construction at the French Chantiers de l'Atlantique shipyard. Saint-Nazaire, 05/18/2020 (c) twitter.com/florence_parly 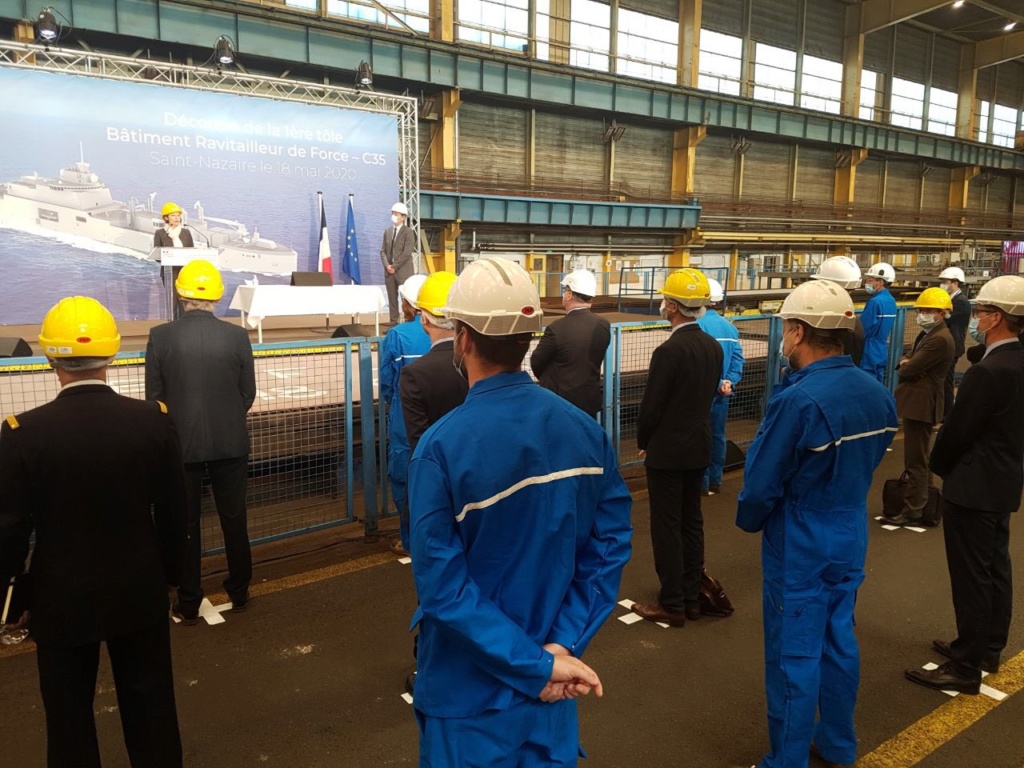 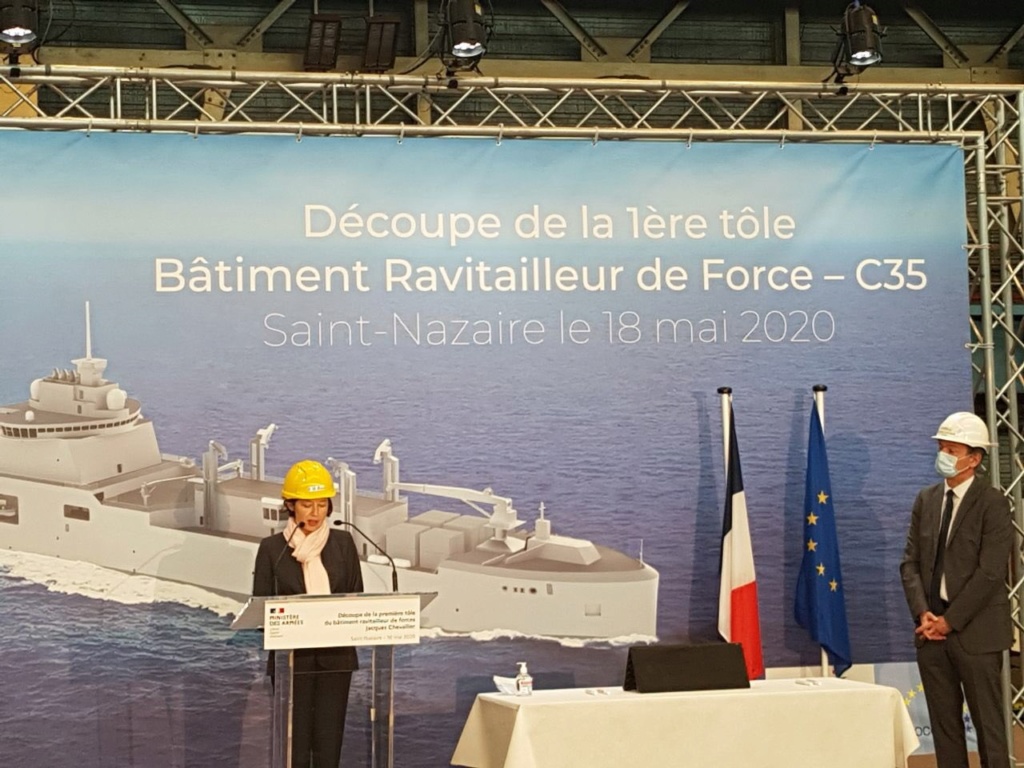