MOSCOW, October 22 (RIA Novosti) – Russia’s army is set to adopt a new assault rifle that performs effectively both on the ground and underwater.

The ADS assault rifle, currently being showcased by the Tula-based KBP design bureau at the Interpolitex 2013 arms show in Moscow, can fire standard-issue 5.45-mm cartridges when above the water with accuracy and effectiveness similar to that of AK-74s.

When submerged and loaded with special 5.45-mm PSP ammunition, the ADS outperforms the service-issue, Soviet-designed APS underwater assault rifle in terms of accuracy and ease of handling.

The new rifle is fitted with an integral 40-mm grenade launcher and adjustable iron sights. Its carrying handle is provided with a bracket to mount various types of optical sights.

“These rifles will soon enter service with special combat units of the Russian army,” a spokesman for KBP design bureau said Tuesday.

For several decades, Soviet and later Russian combat divers and naval commando units were armed with special weapons for underwater combat. These included the SPP-1 pistol and APS underwater assault rifle, which performed poorly on the surface.

The ADS proved its effectiveness and reliability during extensive field trials by Russian naval commando units, according to a KBP design bureau official.

"Russian arms manufacturers have unveiled a new technological marvel – the world’s first ever assault rifle capable of
shooting standard size cartridges both underwater and on land."

Can anybody more knowledgeable on firearms than I explain to me the reason behind the placement of the fire selector on the ADS? It just seems really awkward compared to the selector on other bullpup rifles like the ASh-12.7 which can be manipulated with a quick flick of the index finger.

Most of the time you don't change from full auto to semi or back very often... for the vast majority of the time you will fire single shot, with certain times when burst fire is needed.

The trigger clearly has a built in safety so the lever above the magazine well is only for selecting semi or full auto. The positioning likely allows simpler internal design... having the trigger and pistol grip forward of the magazine means a long connector bar from the trigger to where the hammer is... to have the fire selector forward of where the actual mechanism is would require more extension bars. Where it is located it likely just blocks the auxiliary sear (a hook that holds the hammer back after the first shot to stop the weapon firing). If the auxiliary sear is not blocked then the weapon will continue to fire till the ammo is all gone. If it is blocked the trigger needs to be released and then pulled again to fire repeat shots.
Cpt Caz

Thanks for the answer Garry.
George1

According to wikipedia page Russian commando frogmen number about 800 men.

Some equipment of Russian commando frogmen 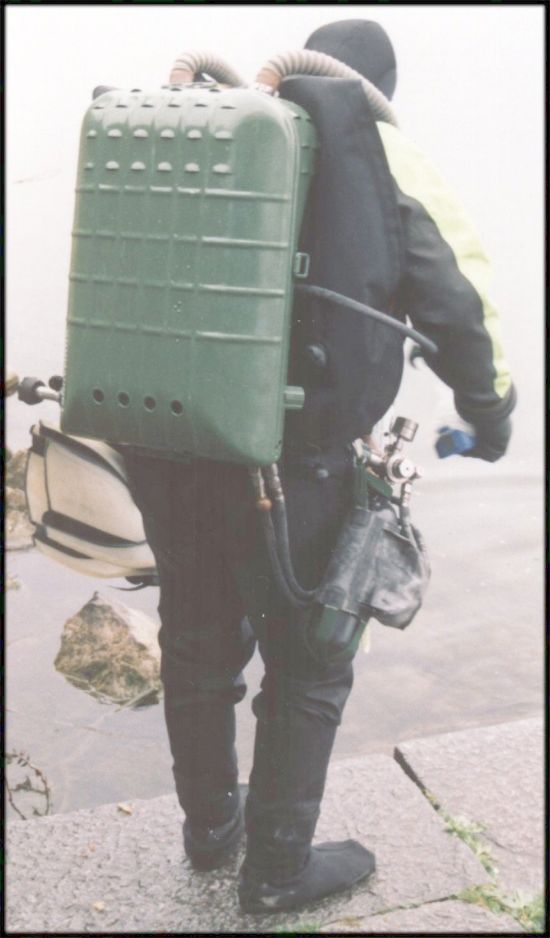 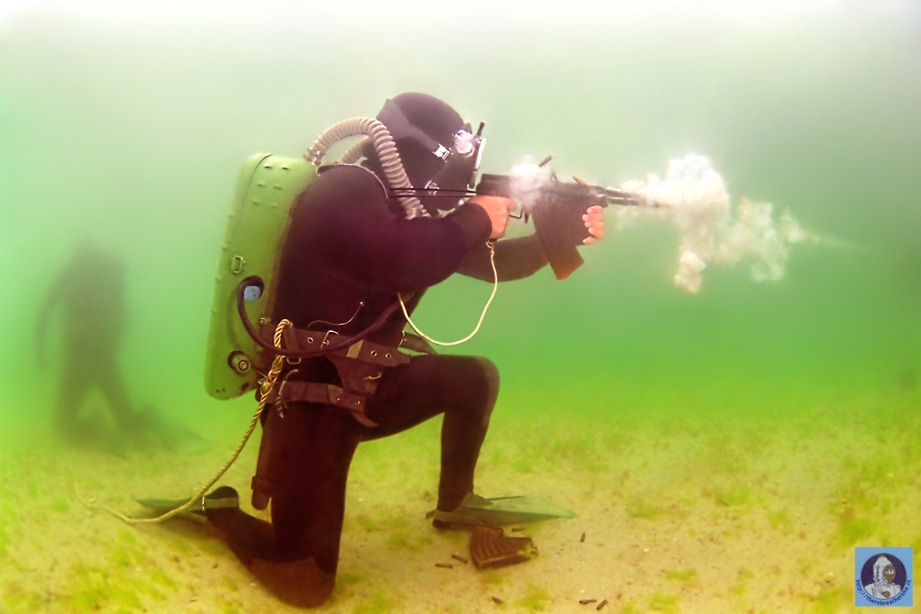 Cool pics thanks for posting.
George1

Scientific and Production Association “High-Precision Complexes” for the first time will present overseas a rifle for naval commandos ADS at the Defence Industry Exhibition IDEX-2015, which will be held from 22 to 26 February 2015 in Abu Dhabi (United Arab Emirates), the press service of Scientific and Production Association told reporters on Friday.

According to the report, due to its unique performance characteristics, ADS is the first rifle in the world, capable of firing equally effective both in water and on land.

“The purpose of the development of the machine was to replace the APS rifle (automatic underwater special) as a combat weapon of special units of the Russian Navy. On land the shooting of a machine gun is effectuated by the caliber 5.45×39 and using the underbarrel grenade launcher with VOG-25 and VOG- 25P. Underwater the fire is effectuated with new cartridges designed specifically for ADS,” was said in a statement.

Cool... but they said the ADS was adopted this year by the naval infantry and some units of the VDV... 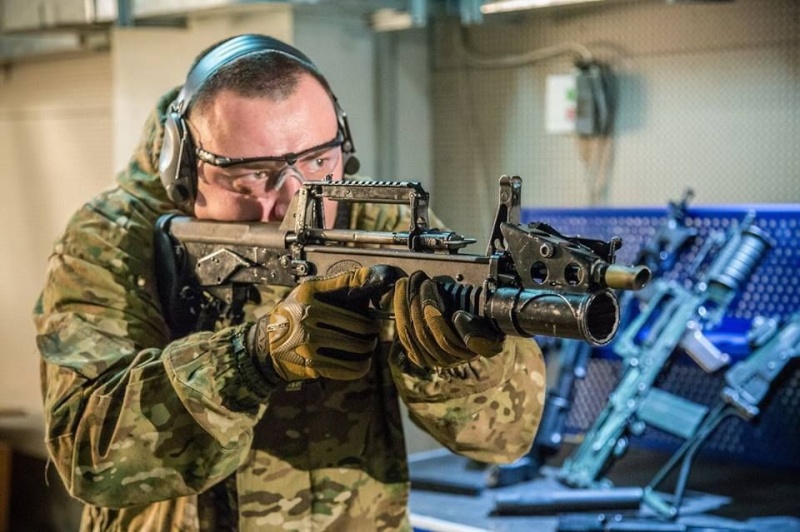 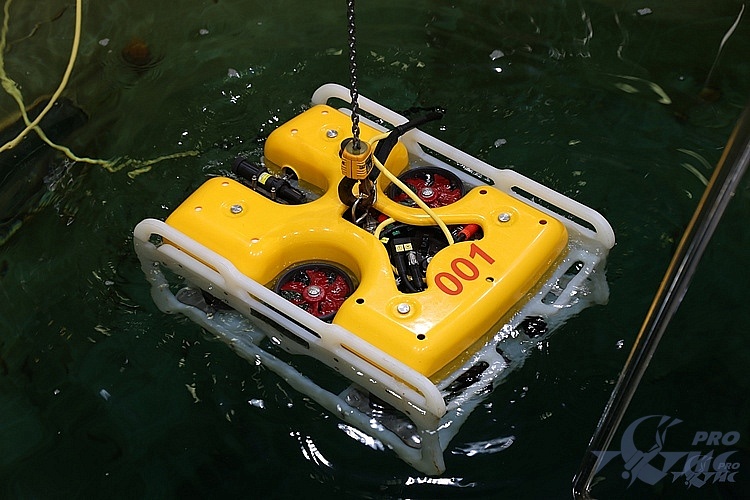 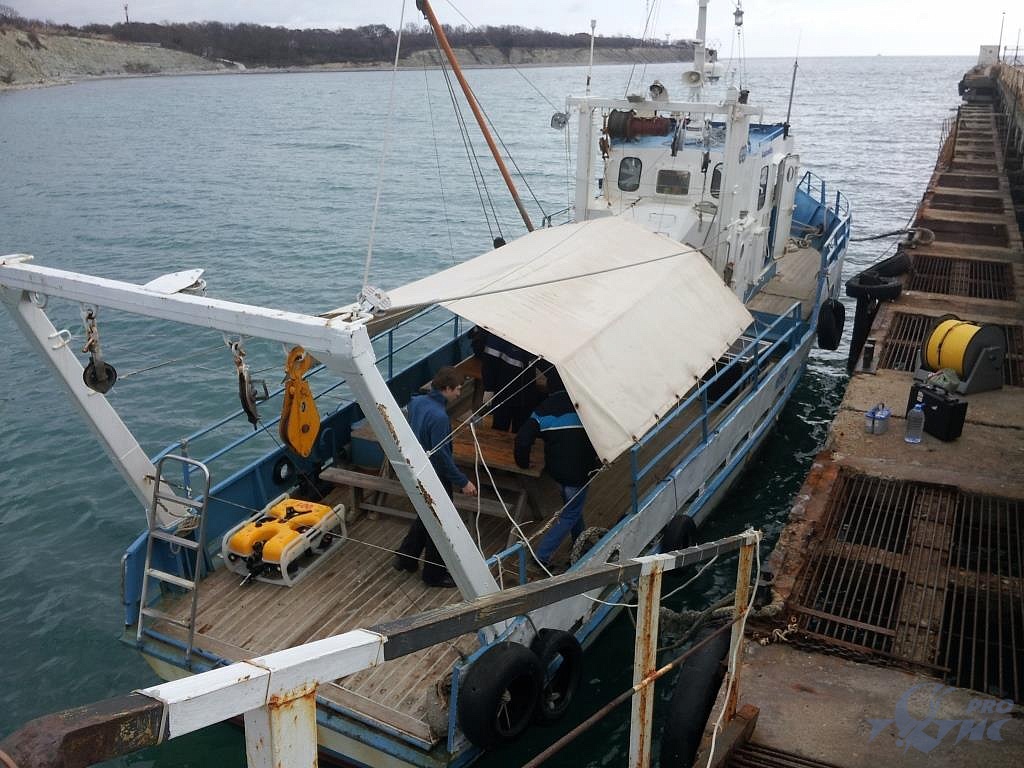 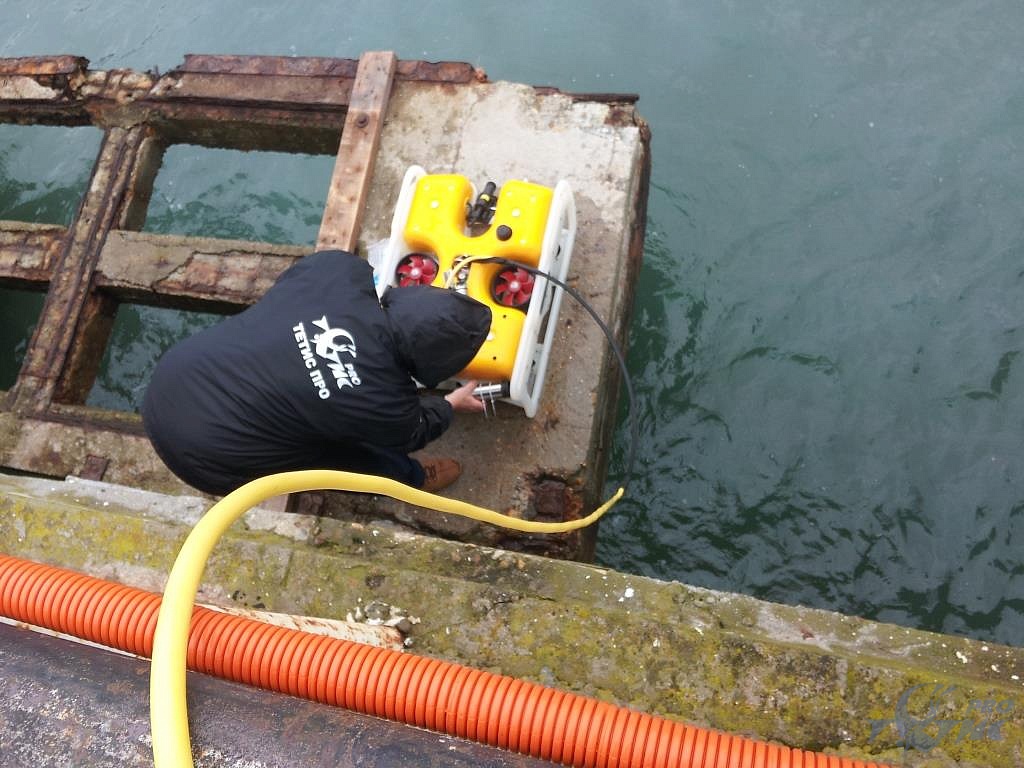 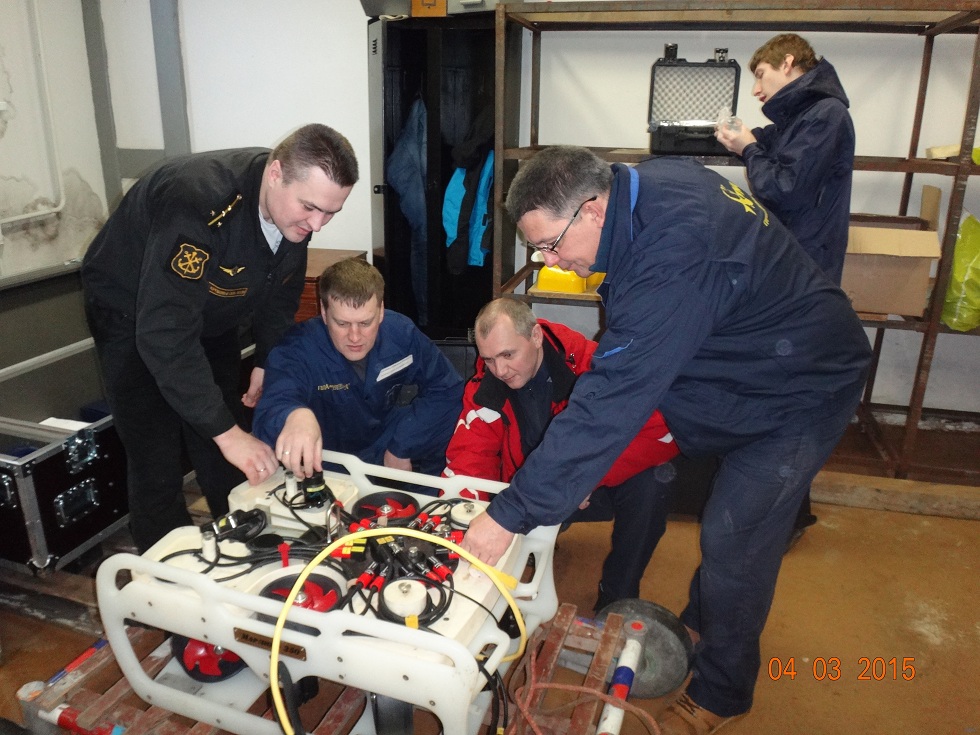 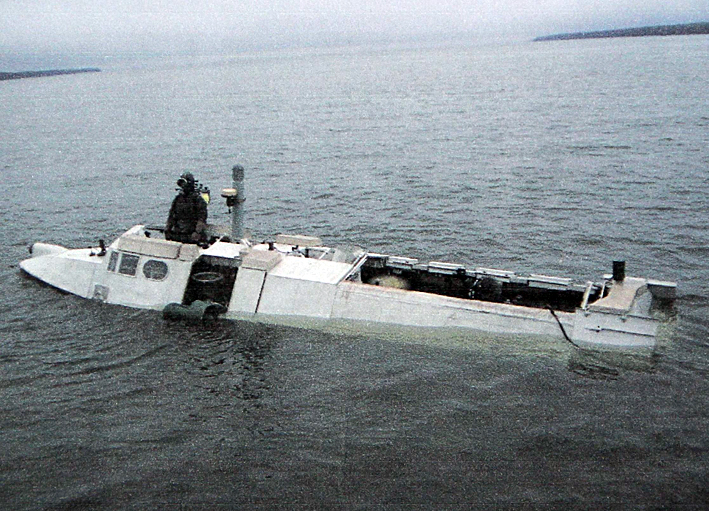 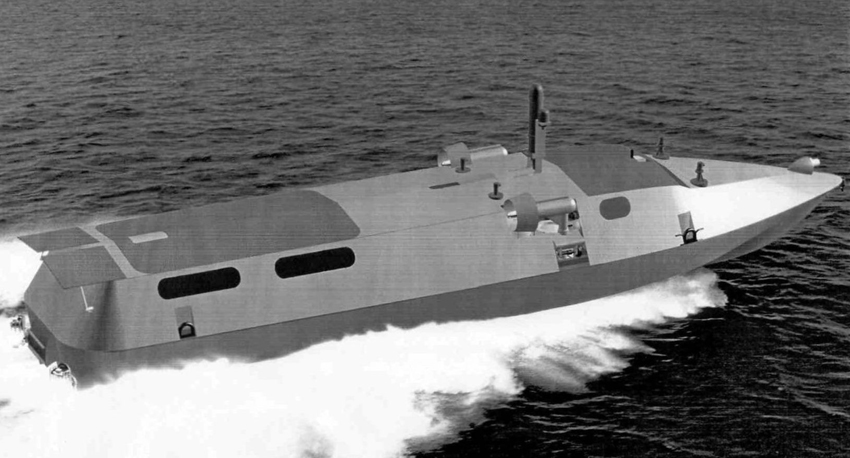 Very little info on this vessel apart from a few bits and pieces. The tender for a submersible speed boat was back in 2000. It's likely only one sample was produced for tests, although the Swedes reported it's "presence" in the Swedish archipelago in Oct 2014 (report was never confirmed after a media frenzy). The Triton-NN reportedly has 3 modes of operation:

“On the first stage of exercises, the fully-equipped frogmen completed exercises underwater at different times of the day and used cold weapons in one-on-one combat as well as in groups,” the press service said in a statement.

Two special units are being created as a part of Russia's Naval Fleet which are designed to detect the enemy saboteurs in Russia's coastal and littoral waters as well as undertake reconnaissance in an enemy-controlled territory, izvestia.ru reported.

The newly created military units are being equipped with "Raptor" boats which can be used during the storm and develop speed up to 80 km/h. The soldiers will also use unmanned flying machines "Tachyon" which can detect the enemy at the depth of several meters.

"There are two new units being created now. One in the Pacific, the second in Crimea," a representative of the Russian Defense Ministry told the newspaper.

According to the spokesman, both squads are experimental, with their main task being to protect the coast from the enemy sabotage and deploy reconnaissance groups in an enemy-controlled territory.

As director of the Center for Strategic Study Ivan Konovalov told the newspaper, coastal and littoral waters have long been actively used by special forces around the world.

"To protect the entire coast is very difficult, so it is quite convenient to deploy unnoticed reconnaissance and sabotage groups to the territory controlled by the enemy and raid its coastal facilities," Konovalov said.

According to the expert, there are three similar groups in the US Navy equipped with special boats for operations in coastal and littoral zones. The UK armed forces also have so called SBS boat groups (Special Boat Service) which operate at the shore and undertake covert reconnaissance, intelligence gathering and other activities.

Kalashnikov Concern, part of the state corporation Rostec, began serial deliveries of assault landing boats for the special forces of the Russian Defense Ministry, according to official statement.

The multipurpose amphibious assault boats, developed by the concern's subsidiary — "Rybinsk Shipyard" —  were showcased for the first time at the International Maritime Defense Show in St. Petersburg in July 2015.

The boats can reach speeds of up to 40 knots (about 46 mph) and have a cruising range of some 400 nautical miles. According to the manufacturer, their technical characteristics and equipment are on a par with foreign competitor while their price is much lower.

The BK-16 appears to be just a slightly smaller version of the Raptor.
Guest 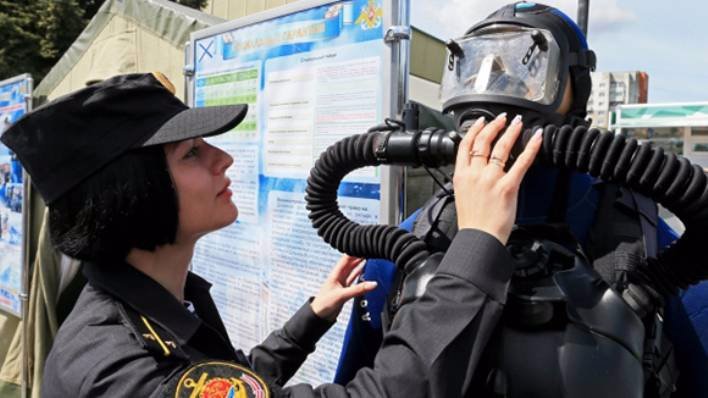 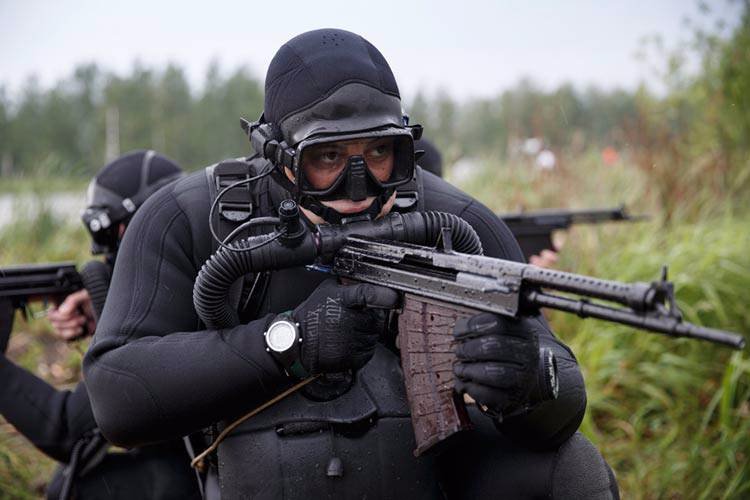 The work of Russian combat swimmers in Syria, guarding the ships of the Navy in the port and on the roads of Tartus, continues the practice of using naval special forces in the USSR to protect domestic shipping and warships in dangerous waters. About this Lente.ru reported a source in the Russian law enforcement agencies.

According to the press, all categories of combat swimmers work in Tartus: miners, engineers, scouts. They work out a whole range of activities, ranging from anti-sabotage and mine clearance to ships, ending with the exploration of the most convenient places on the coast, where enemy combat swimmers can land. 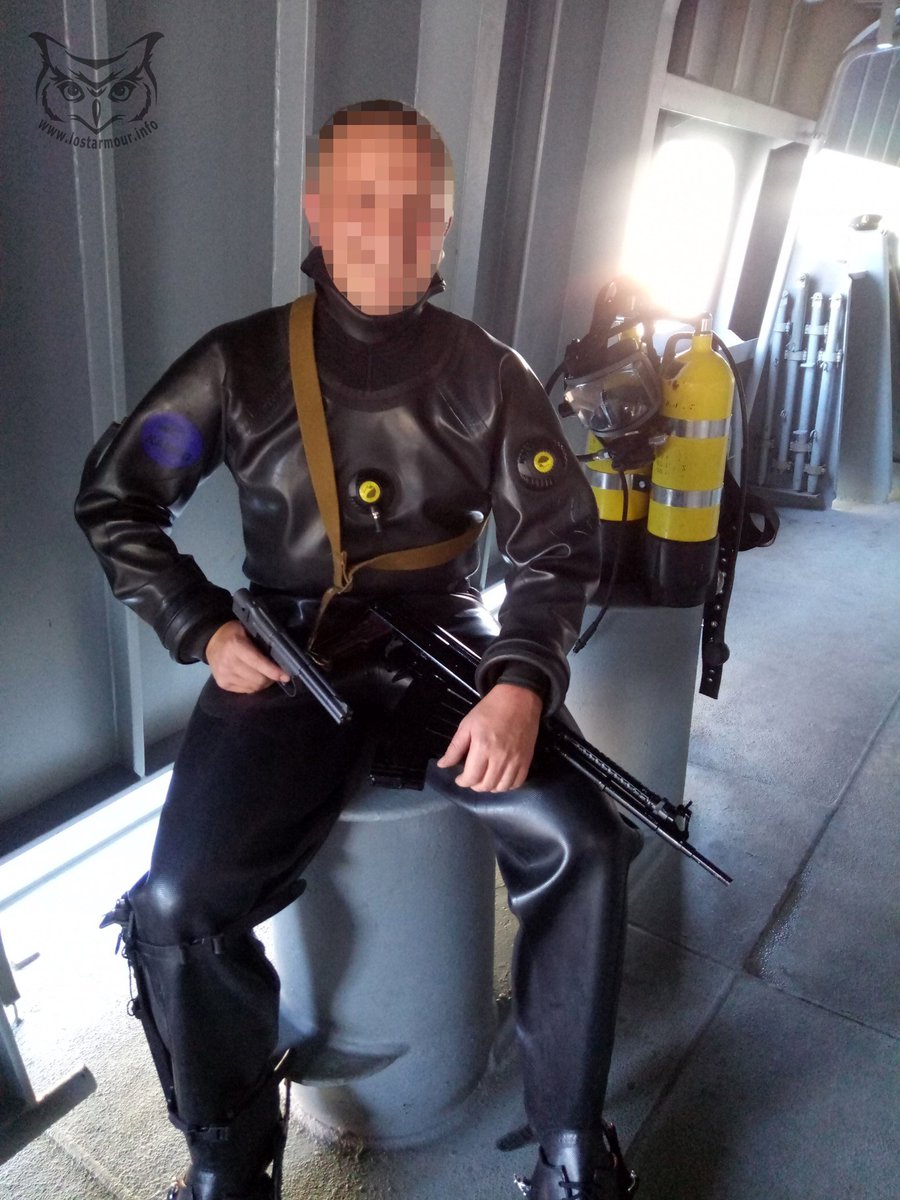 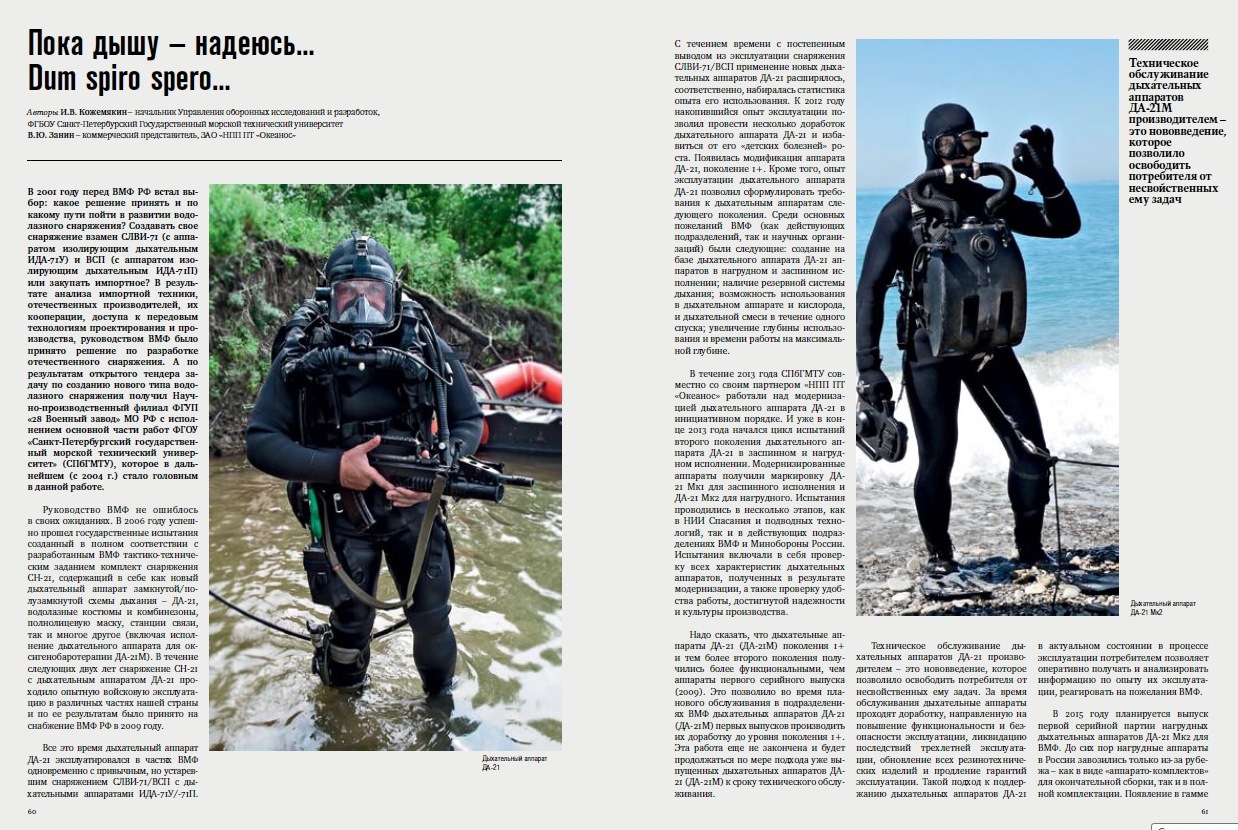 I should point out that the ADS rifle shown in a few videos above is better than the APS because the APS can only fire very long projectile rounds that only work effectively underwater.

This means that when using the APS you also need a conventional AK for use above the water, while the SPS-1 four shot derenger type pistol as shown in the video above is also designed to be effective under water a normal weapon loadout for naval spetsnaz that might approach a port via water but then engage targets in the port and then leave via the water needs five firearms... a Makarov pistol and AK-74 perhaps with a GP-30 under barrel grenade launcher for use in the port above water, and an SPS-1 pistol and APS rifle for use underwater, the current diver can use the ADS which has a built in 40mm grenade launcher and can use standard 5.45mm ammo above water and special underwater ammo for firing underwater, into water or out of water, while the GSh18 pistol can fire 9x19mm underwater ammo similar to that developed for the 5.45mm rifle.

The ADS is probably more accurate than the Ak-74 and the GSh-18 is certainly better than the Makarov, though they might be using a newer pistol by now like the Udav...
George1

Firing from a special underwater weapon - an SPP-1 pistol and an APS submachine gun - is practiced by soldiers of the PDSS detachment in Kamchatka.

During the lesson, the combat swimmers also examined the underwater part of ships, ships and berthing facilities for possible laying of mines and explosive devices, and also practiced underwater combat using edged weapons.