MOSCOW, May 22. /TASS/. Russian President Vladimir Putin has sent a greeting message to the participants in the 15th meeting of security and intelligence chiefs from member countries of the Commonwealth of Independent States (CIS).

"The current situation in the world requires new, efficient ways of reacting to the present-day challenges," Putin stressed, adding that among the most serious challenges are terrorism, merger of radical groups with transnational organized crime, illegal migration, drug trafficking and environmental risks," the Kremlin website cites Putin’s message.

"In this situation, the CIS nations are facing common tasks to ensure national security, defend sovereignty and state system, rights and interests of their citizens. Security and intelligence agencies are called to play a decisive role in that. For these ends, they are required to demonstrate more efficient work in all spheres of their activities," the message says.

According to the Russian leader, over the period of its existence, the meeting has proved its worth as an "efficient consultative body providing optimal possibilities for the discussion of the most serious professional problems and planning joint actions in the interests of the CIS member states."

Set up in 1991, the Commonwealth of Independent States (CIS) is a regional interstate organization incorporating 11 former Soviet Republics. Its key goals include cooperation in the political, economic, social, cultural and other areas, establishment of a common economic space, advocacy of human rights and freedoms, ensuring peace and security, combatting organized crime, and cooperation in the area of defense policy and protection of outer borders. 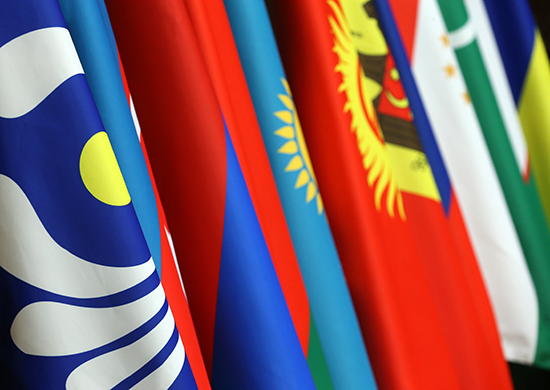 During the session of the CIS Defence Ministers in Kyzyl, the attendees signed intergovernmental agreements on the use of military satellite communications, and on sharing geospatial information.

The defence ministers also considered proposals on the further development of the CIS Joint Air Defence System, the Joint Communication System, the Unified State IFF system, and the aviation security system of the Armed Forces.

In particular, the sides approved the Regional Security – 2018 CIS joint computer command post exercise to be held in Belarus.

The defence ministers of the CIS countries supported the proposal of Belarus to develop a new priority area of ??cooperation concerning the use of UAVs of the armed forces and counteraction to unmanned aerial vehicles.

The next session of the Council of the CIS Defence Ministers will be held in Uzbekistan in autumn 2018. 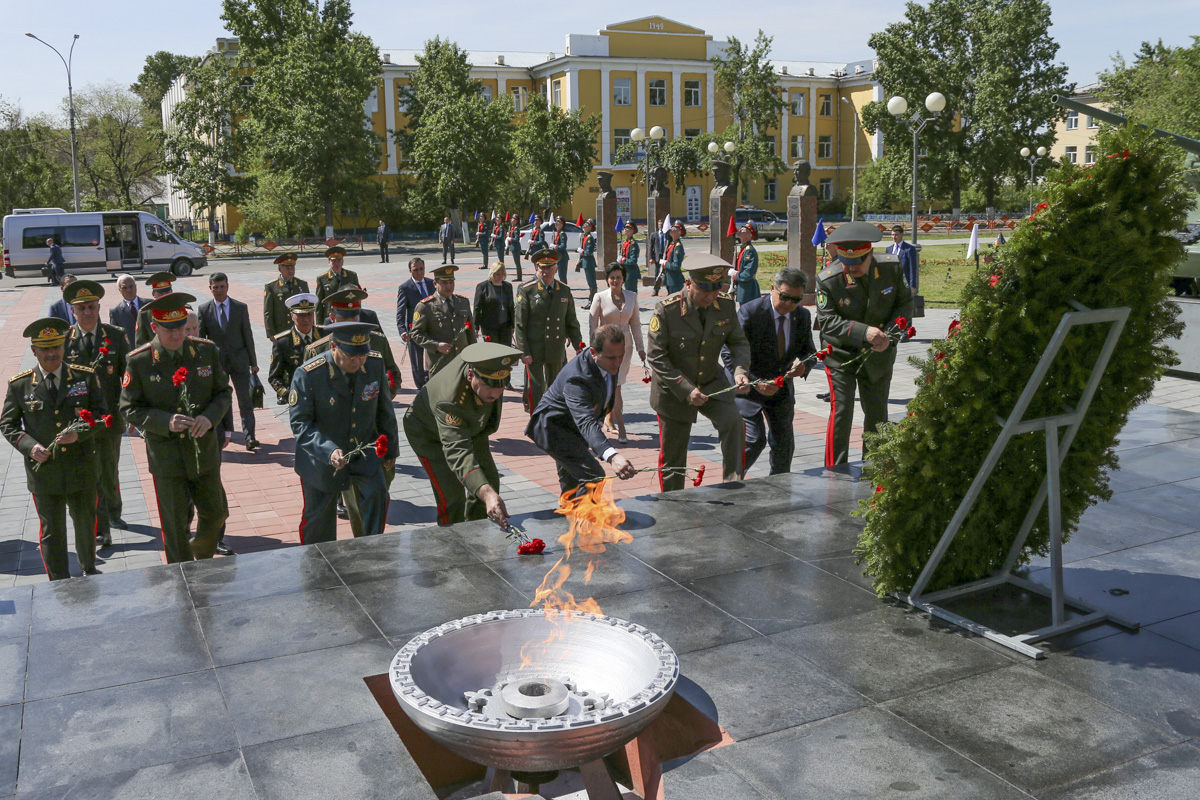 The defence ministers of the CIS state-members laid wreaths at the Memorial Complex on the Victory Square in Kyzyl, on the eve of the session.

The Council of the CIS Defence Ministers session will be attended by military delegations from Azerbaijan, Armenia, Belarus, Kazakhstan, Kyrgyzstan, Russia, Tajikistan and Uzbekistan, as well as by representatives of the executive committee and working bodies of the CIS will take part in the session. The Defence Minister of Mongolia will be present at the session as a guest of honour.

Russian Defence Minister General of the Army Sergei Shoigu is to chair the session.

DUSHANBE, August 23. /TASS/. The Committee of the Chiefs of the General Staff of the CIS (Commonwealth of Independent States) Armed Forces has approved the draft Concept for the Development of Military Cooperation of the CIS States by 2025. Chief of the General Staff of the Russian Armed Forces, Army General Valery Gerasimov said, summing up the results of the session.

"The draft Concept for the Development of Military Cooperation of the CIS States by 2025 has been approved. This document has a program nature. It determines the tasks of our cooperation in the sphere of defense and military security in the midterm," the chief of the General Staff reported.

He noted that the session was held in a business and constructive atmosphere. "More than 10 current issues of military cooperation were discussed as part of the agenda," Gerasimov reported.

MOSCOW, January 1. /TASS/. In 2022, Kazakhstan is picking up the baton of the CIS chairmanship from Belarus, which led the organization during its 30th anniversary. The CIS has established itself as a full-fledged political organization, and Minsk was able to keep it running as a platform of opportunities despite the pandemic and the political ups and downs separate member countries faced. Nur-Sultan is set to continue the steady development of the CIS as a regional group.

Last year, the regional organization’s member-states managed to enhance their economic performance. In January-August 2021, the value (in current prices) of mutual trade of the Commonwealth countries increased by 28.3% from a year earlier. Exports increased by 28.6%, while imports rose by 28%. All the Commonwealth countries ended the first nine months of the year with an increase in their gross domestic product values without a single exception. The total GDP of the CIS expanded by 4.4% in 2021, according to the CIS Executive Committee.

During a CIS summit on October 15, an agreement was signed to counter the legalization of criminal profit, the financing of terrorism and the proliferation of weapons of mass destruction. Russian President Vladimir Putin said that laid a good foundation for unifying the efforts of the Commonwealth’s members in the fight against terrorism and drug trafficking.

Maulen Ashimbayev, who serves as speaker of the Senate (upper house) of Kazakhstan’s parliament, said that one of the priorities of the country’s chairmanship would be promoting parliamentary diplomacy. That’s according to the concept of chairmanship that, he said, President Kassym-Jomart Tokayev of Kazakhstan has already approved and that would be presented in January.

Plans are in store to put together an agreement on free trade in services in the CIS by May 2022 to be signed by the heads of member-state governments. According to Chairman of the Executive Committee and CIS Executive Secretary Sergey Lebedev, in addition to member states, the agreement will be open to other countries to join on certain conditions.

Putin said that CIS countries would jointly develop a biological risk monitoring system and exchange information on the fight against epidemics. According to his Kazakh counterpart, the country is committed to intensive work on regional consolidation. For the purpose of bringing the peoples of the member countries closer together, Kazakhstan declared the following year the Year of Folk Art and Cultural Heritage of the CIS. The plan for its implementation includes about 100 events aimed at preserving the historical ties and strengthening interaction in the fields of culture, tourism and sports, Tokayev said.

I post my reply in this thread to what d_taddei2 wrote this morning in the Ukrainian special operation thread.

I did not find a separate thread for Kazakhstan, so I am using the CIS one.

Maybe its time those clowns won a bid for "de Communisation".
Just like the Pukraine, it was never a real country, just a product of regions of the USSR.
A significant chunk was actually Russian til some time in the 1950s.

And the backward fuckwits managed to succeed in getting many of the ethnic Russians to give up and emigrate after the end of the USSR.

Its not a giant population, so maybe its time the potential/emerging problem was fixed once and for all.

Wasn't there a color revolution attempt in Kazakhstan not too long ago?
I'm always fascinated and impressed how countries naturally gravitate to the collective west only to get  f*cked over a short while later, never learning from the mistakes of other countries who tried and failed such as Yugoslavia, Belarus, India, Libya, Syria, Iran, Iraq, the Ukraine and Armenia. It always ends the same yet there's a new sucker lined up to suck western dick in the hopes of being accepted and loved by them, like an abused wife .

Broski wrote:Wasn't there a color revolution attempt in Kazakhstan not too long ago?
I'm always fascinated and impressed how countries naturally gravitate to the collective west only to get  f*cked over a short while later, never learning from the mistakes of other countries who tried and failed such as Yugoslavia, Belarus, India, Libya, Syria, Iran, Iraq, the Ukraine and Armenia. It always ends the same yet there's a new sucker lined up to suck western dick in the hopes of being accepted and loved by them, like an abused wife .

Yes, there was. Currently the West is steering with quite some effort on all nationalistic associated groups to gain a Kazakh nationalistic movement. There are also a not insignificant amount of politicians who are seeing the events in Ukraine as a sign of "Russia bad" and are sympathizing with nationalistic views. Sooner or later we will see an issue in Kazakhstan. With the current events of shouting down terminals for Kazakhstan and the prior events of blockades this looks like there is some brain cancer going on in the Kazakh leadership.
Hole

Maybe someone should send Kadyrov to speak to his muslim brothers.

I imagine Tokayev gets quite a bit of info and support from Russia and the A OK to make these moves as it's still vital to Kazakhstans economy. Kazakhstan has stated they want to further increase trade with Russia and not interested in sanctions (obviously). And I bet Tokayev is reminded that Russia saved his ass very recently.

Plus it seems the other powers that surround Kazakhstan have moved closer to Russia as well during this period. With adding China to the mix not quite that happy with Oazakhstan, the Kazakhs have very little room to maneuver.

Time will tell of course.

Prior to Ukraine war , oil and gas supply just about kept up with demand . Nothing changed now . So , like it or not , the same balance must exist now . The only change comes in , when some consumers change their suppliers , forcing others to do the same . But if supply is increased by some , to take the market share of other " sanctioned " suppliers , then this amounts to economic war . Those who wage war against a strong power , suffer the consequences . Unless they wait until such powers are weakened by war or sanctions , to easily win against them . Khazakhs can supply China and Asia , keeping the same level of output as before the Uki war . Russia is doing the same . While others can supply Europe more .

So Kazakhstan pulls out of the CIS just like that ? Something is going awry here. Russia needs to get into the color devolution business itself. Overthrow this piece of shit
George1