when it will be delivered??
George1

Painting of first serial Il-76MD-90A transport aircraft was completed. The jet was decorated with “Ulyanovsk” sign and the emblem of Ulyanovsk Region, the press-service reports.

For the first time ever Russian-produced polyurethane enamel was used for painting Il-76MD-90A. The All-Russian Scientific Research Institute of Aviation Materials (VIAM) developed special enamels VE-69 and VE-71 for the upgraded “Il” aircraft. «The special feature of this paint is that it is almost matt rather than gloss. It has better spreadability and lower shagreen. VE-71 enamel has high abrasion and temperature resistance when applied to composites. These features are part of requirements set by the Russian military-transport aviation. These enamels also have some special protective properties», - First Deputy CEO of Spektr Avia, Vitaly Alexandrovich Zotov, explained.

The jet in the livery approved by Russian Ministry of Defense was delivered to Aviastar-SP in order to start planned ground and flight testing.

Il-76MD-90A was derived from Il-76MD aircraft, which was manufactured in Uzbekistan by Tashkent Aviation Production Association named after V.P. Chkalov.

Russian Ministry of Defense signed a contract for delivery of 39 Il-76MD-90A transport aircraft in October 2012 at a meeting held by the president of Russian Federation, Vladimir Putin.
George1 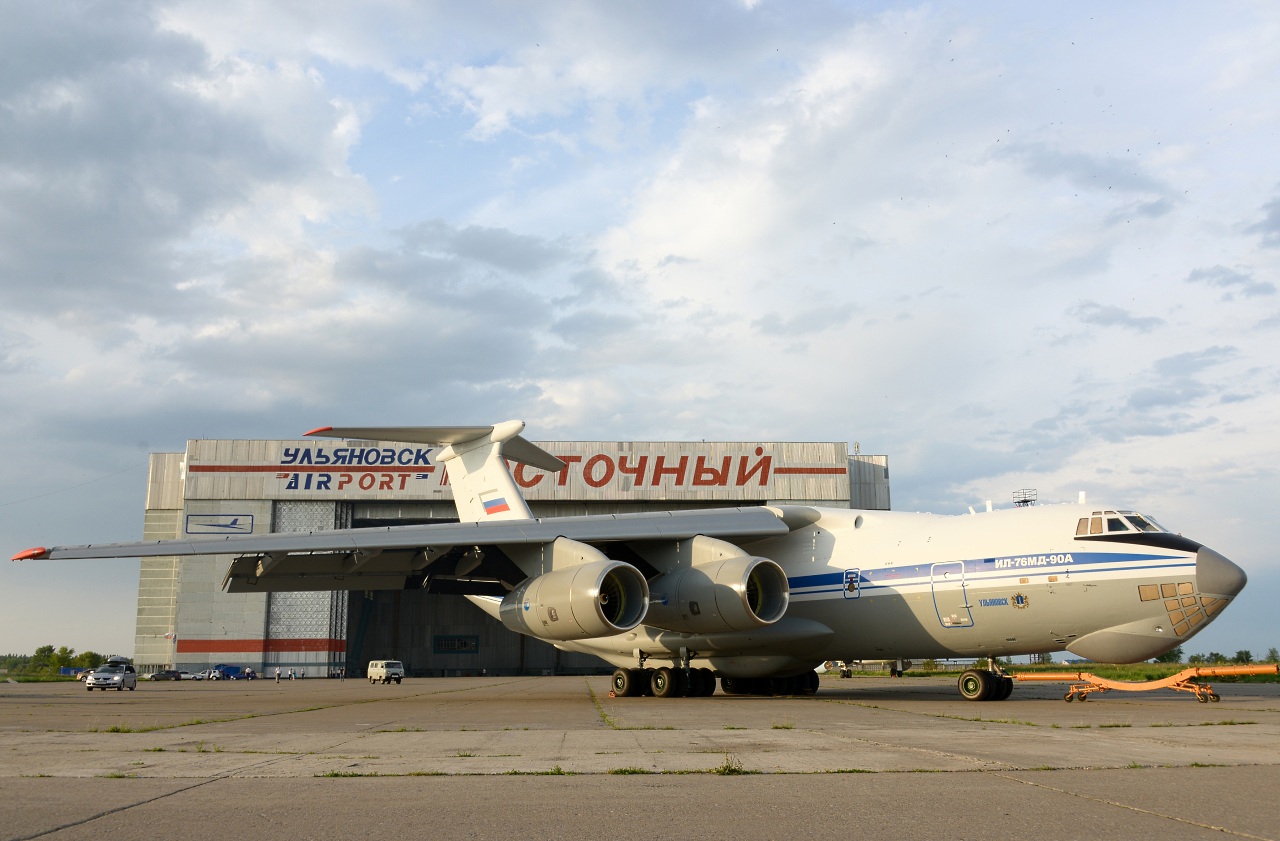 Another Il-76MD-90A aircraft (MSN 0104) was rolled out of final assembly workshop of Aviastar-SP and transported to the enterprise’s flight test department. The jet was fitted with aircraft systems and equipment and its cockpit was fitted with state-of-the-art avionics suite. Pressure testing of a wingbox and fuselage center section has been completed, press-service of Aviastar reports.

“Upon completion of ground and production flight tests the jet will be transferred to aircraft painting workshop,” the enterprise noted. 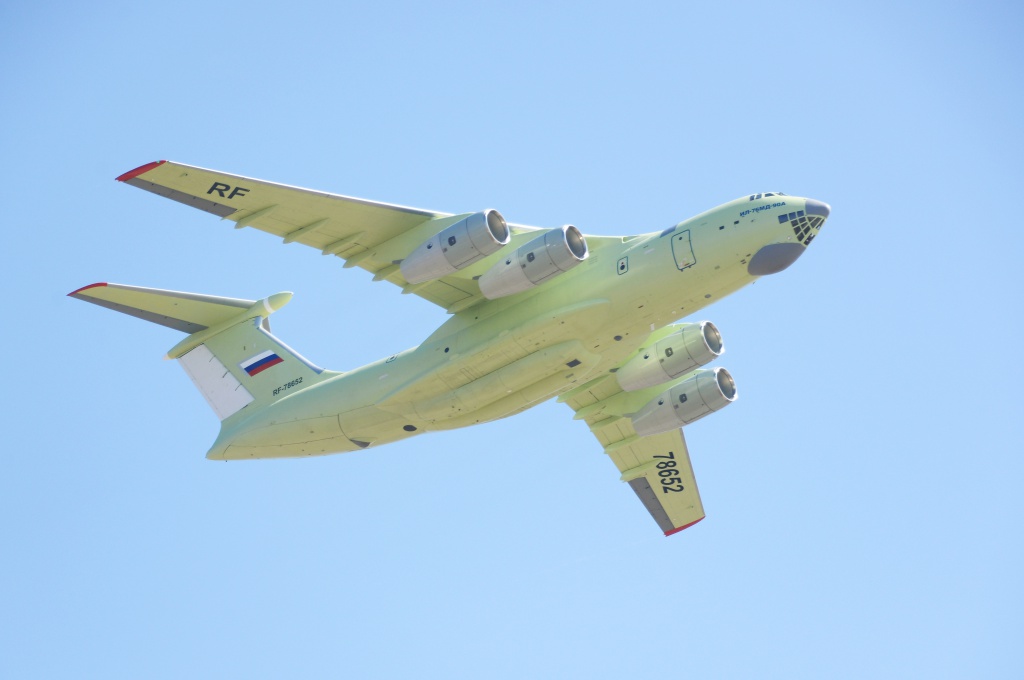 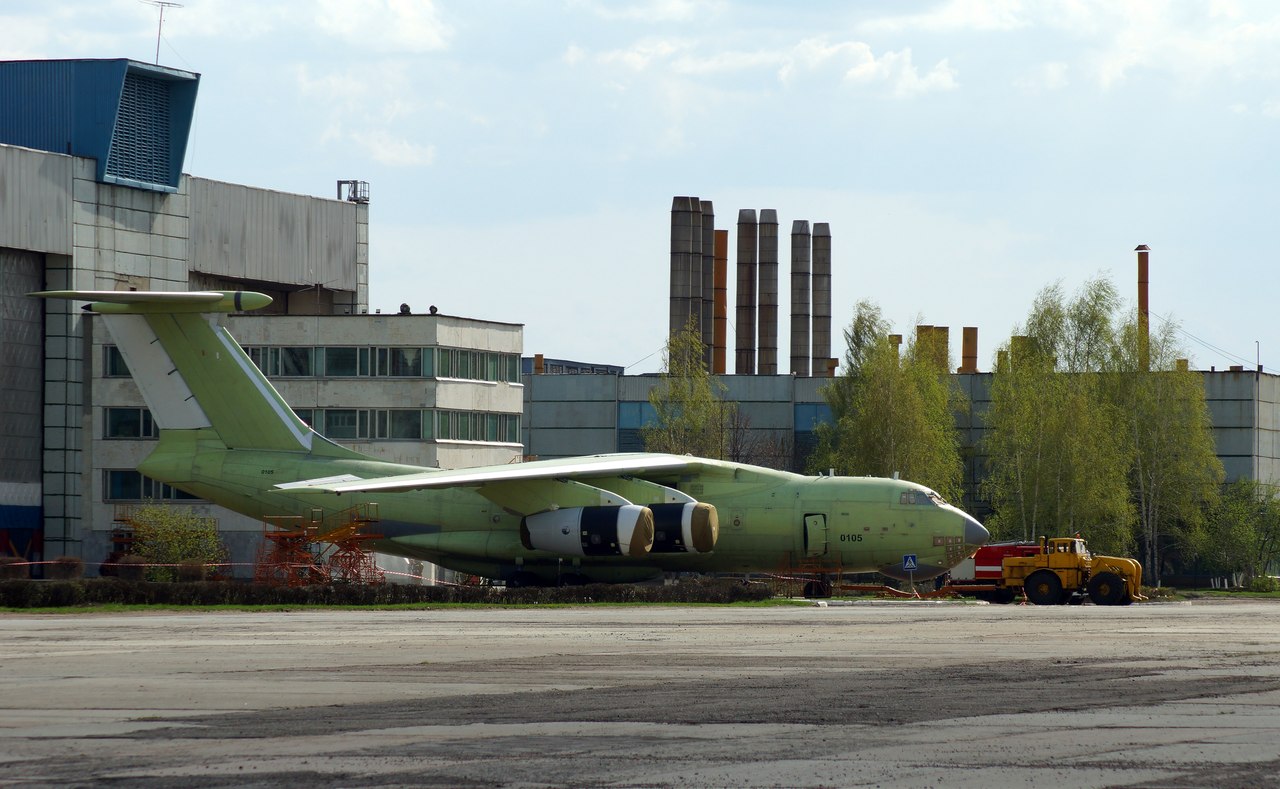 Production Il-76MD-90A aircraft manufactured by Aviastar-SP was delivered to the customer. The jet was manufactured under a contract with Russian Ministry of Defense, press-service of Aviastar-SP reports.

“This is the fourth production Il-76MD-90A manufactured by Aviastar-SP. This year the Ulyanovsk-based enterprise is going to manufacture two more jets of the type. About 10 aircraft are under construction at the plant. Aviastar-SP is also assembling components of the first Il-78M-90A tanker aircraft. The work is being carried out under a contract with Russian Ministry of Defense for development of the next-generation tanker aircraft,” the company noted.

Il-76MD-90A was derived from proven Il-76 aircraft; it was developed by Ilyushin Company. The latest navigation equipment, automatic control system, communications system and glass cockpit meet all the existing requirements for aircraft avionics and help improve the flight safety and precision of aircraft navigation. The replacement of D-30KP2 engines with more advanced PS-90A-76 ones, installation of upgraded wing and reinforced landing gear significantly expand the jet’s operational capabilities, press-service of Aviastar-SP added.
George1

The contract for the procurement of the Ministry of Defence 39 Il-76MD-90A was signed in 2012. In late April, the Russian Defense Ministry was handed the first aircraft under the contract.

MOSCOW, May 25 - RIA Novosti. "Aviastar-SP", the largest Russian enterprise for the production of aircraft, before the end of this year, the Defense Ministry will give a total of three new series of military transport aircraft Il-76MD-90A, said Monday the company CEO Sergey Dementiev.

The contract for the procurement of the Ministry of Defence 39 Il-76MD-90A was signed in 2012. In late April, the Russian Defense Ministry was handed the first aircraft under the contract.

"Production of IL-76MD-90A is a priority project of the company. In 2015, the plant has already put into operation one aircraft of this series. By the end of the year under a contract with the Ministry of Defense will be sent into operation two Sun Il-76MD-90A", - quotes Dementieva press service of "Aviastar".

On Friday, the final assembly of production "Aviastar" was handed over to the painting in the "Spectrum-Avia" another Il-76MD-90A under the serial number 0105. It has completed the installation and equipment in the cockpit is equipped with modern avionics. Also successfully tested fuel and center-wing box for leaks, said the press service.

"After the paint work on a new series Il-76MD-90A will continue ground testing," - said "Aviastar".

Subsequently, the aircraft will be delivered to the customer.

Defense Minister Sergei Shoigu earlier said that the new modification of the IL-76 is serially produced in Ulyanovsk, "without regard to foreign suppliers, and partners."

As reported in February, RIA Novosti deputy general director of "IL" program management Artyuhov Sergei, the new state armaments program 2015-2025 examines the possibility of extending the contract. He also said that "IL" sees India and China as potential buyers of the Il-76MD-90A.

MOSCOW, 4 Jun — RIA Novosti. The two first heavy military transport aircraft Il-476 (Il-76MD-90A) will be in the air force of Russia in the end of 2015, said Thursday the commander of Military transport aviation of the air force Lieutenant-General Vladimir Benediktov.
"I hope this year to receive the first two aircraft, they are called correctly the Il-76MD-90A", — he has told on air of TV channel "Russia 24".

max steel wrote:How come you fell for an indian women being a slavic . were you running short of beautiful slavic women ?

Mine is Slav and I cannot complain. Specially when she can hear

Aviastar-SP, one of the largest enterprises of Russia’s aircraft industry, will deliver a total of three latest Il-76MD-90A transport aircraft in 2015, RIA Novosti reports with reference to Aviastar-SP CEO Sergey Dementyev.

A contract for delivery of 39 Il-76MD-90A aircraft to Russian Ministry of Defense was signed in 2012. Under the contract the first jet of the type was delivered to the ministry in April 2015.
Follow us on: Follow ruaviation on Twitter

In late May Il-76MD-90A MSN 0105 was delivered from the Aviastar’s final assembly workshop to Spektr-Avia responsible for painting the jet. All the necessary aircraft systems and equipment were installed; the jet’s cockpit is fitted with state-of-the-art avionics. Leakage tests of the wing box and wing stub box have been successfully completed, the press-service noted.

“After the painting is complete, the ground tests of the new Il-76MD-90A will continue,” Aviastar reports. After that the jet will be delivered to the customer. Il-76MD-90A was derived from the proven Il-76 aircraft developed by Ilyushin Company”.

Russian Minister of Defense Sergey Shoygu said earlier that mass production of the new version of Il-76 aircraft is being carried out in Ulyanovsk “without any cooperation with foreign suppliers and partners”.

Aviastar-SP is one of the largest enterprises of Russian aircraft industry. The plant specializes in production of Il-76MD-90A military-transport aircraft, passenger and cargo jets of Tu-204 Family, maintenance and overhaul of An-124 Ruslan aircraft. Moreover, the enterprise is responsible for installation of interior and testing of some systems of Sukhoi SuperJet 100 aircraft. The plant also takes part in production of the new short- and medium-haul MS-21 aircraft.
George1

A solemn ceremony dedicated to rollout of the second Il-76MD-90A intended for Ministry of Defense was held in Ulyanovsk
Russian Aviaton » Thursday July 30, 2015 12:19 MSK

A solemn ceremony dedicated to rollout of another Il-76MD-90A military-transport aircraft painted in livery of the Russian Ministry of Defense was held on June 9th 2015 in Ulyanovsk, TASS reports.

“The same month the jet was delivered to the Ilyushin Company’s flight test and development base; it will be handed over to the customer in August. It is planned that the aircraft would participate in MAKS-2015 airshow,” Aviastar-SP CEO Sergey Dementyev said.
Follow us on: Follow ruaviation on Twitter

The Governor of Ulyanovsk Region Sergey Morozov added that the jet would be named after the outstanding aircraft designer Viktor Livanov. “As a pilot I have been operating the Il aircraft for 30 years. It is a great aircraft, I love it and hope that it will serve Russia for years to come,” Commander-in-Chief of the military-transport aviation Vladimir Benediktov said.

All the necessary aircraft systems and equipment have been installed and a number of tests have already been completed. Now the aircraft (MSN 0105) will undergo ground and production flight tests. It will be the second airliner of the type delivered to Russian Ministry of Defense under a contract for delivery of 39 Il-76MD-90A jets. The contract worth 140 billion rubles was signed in 2012. Deliveries should be completed by 2020. However, in early June Benediktov said that the armed forces would take delivery of only 30 jets of the type by 2020.
George1

Next Il-76MD-90A made its first flight
medo

Photos from open door day in Aviastar-SP in Ulyanovsk. It is interesting to notice, that some of Il-76MD-90A have modified nose, where could be installed MAWS sensors and DIRCM complex.
Kyo

Just develop new engines for it and stop wasting time with hacks. If it takes 10 years to do this then so be it.
I bet they would waste 10 years just talking about why things can't be done.

BTW, spending $10 billion on welfare or on aircraft development is the not the same thing as far as the GDP is concerned.
The latter creates jobs and a usable product which brings long term GDP growth. The former is all about feel good populism
that expires almost instantaneously. Russia can find the time and the money to do this right.
Guest