I suspect however the twin or more engine mantra with the Russian air force will continue so even a light LFI or LFS will likely have two engines.

It is interesting they are talking about a stealthy 5th gen CAS aircraft to replace the Su-25... is it possible they might go for a cross between an F-35 and Su-25 to get a cheap light but stealthy aircraft with the potential for an internal Air to air payload for stealthy use and a huge external payload for anti armour use that is not so stealthy?

i wonder if that LFS will have share such role too. Heard that day of dedicated CAS like A-10 and Su-25 is over. Her armaments would be 6x 650mm tubes slanted as Yasen. Her sonar suite is spherical as Irtiysh Amfora...

Internally however she is similar as German U-212 submarine

My projection of pressure hull arrangement : Rather ugly but i think it is representative.. Her "waisted" section house the fuel cell generator and engines. outside the hull lies the Liquid Oxygen tank and bottom of it house Metal Hydrate hidrogen storage tank. The huge ball ahead is the spherical array while small "tube" protruding from the mid section is the rescue capsule's pressure hull.

Trends i heard however Russian will use fuel cell with diesel fuel reformer as source of hydrogen. That's fine but in my view it'll impose penalty as that kind of fuel cell will produce carbon dioxide. disposal of Carbon dioxide is possible with use of Cosworth mechanism BUT This will impose power penalty to the AIP to dispose CO2 using Cosworth system.
GarryB

From what I have read about the new Russian AIP it is rather more powerful than western AIPs and the critical thing is that unlike with western AIPs the whole worlds ports are already equipped to supply diesel to vessels so the infrastructure is already there for them to operate. With western AIPs you need expensive and complicated hydrogen supply infrastructure to be built, plus all the hydrogen generation and storage equipment/infrastructure.

CO2 can be compressed and highly pressurised and released when on the surface or snorkelling. Indeed you could pump it into cannisters and launch them leaking CO2 and making noise as decoys (the mass of bubbles would reflect sonar signals and give size to a active sonar pulse making the decoy look rather larger than it actually is...

BTW if you want your sub to be able to dive deep, then the internal pressure hull would be more efficient if it is made up of a lot of spheres... that allows higher pressures and deeper diving depths.

Regarding CAS I really don't see radar guided threats as being that serious for CAS aircraft and I rather suspect the main threat to replace the CAS aircraft is the UCAV drone that orbits near the front line with very small guided weapons like a KAB-50, and a Kornet-EM like payload...

Operating well above trash fire altitude... say 10-15km up a single drone could carry dozens of Kornet-EM missiles and 20 or so KAB-50 bombs. Any soft target can be dealt with using KAB-50 bombs which would use precision to make up for the small warhead... which also means it can be used in built up areas quite close to friendly troops without risking friendly forces. For hard targets the Kornet could penetrate about a metre and a half of RHA and from near vertical that would mean roof armour.

An armour/concrete piercing bomb could be adapted too and of course a FAE bomb all guided to allow responsive troop support at low cost.

The main weapon of the Su-25 was the unguided rocket and unguided bomb but GLONASS guided bombs and laser beam riding missiles will be just as cheap and just as accurate or more so. (All IMHO).
Stealthflanker

Thinking about a Heavy IFV 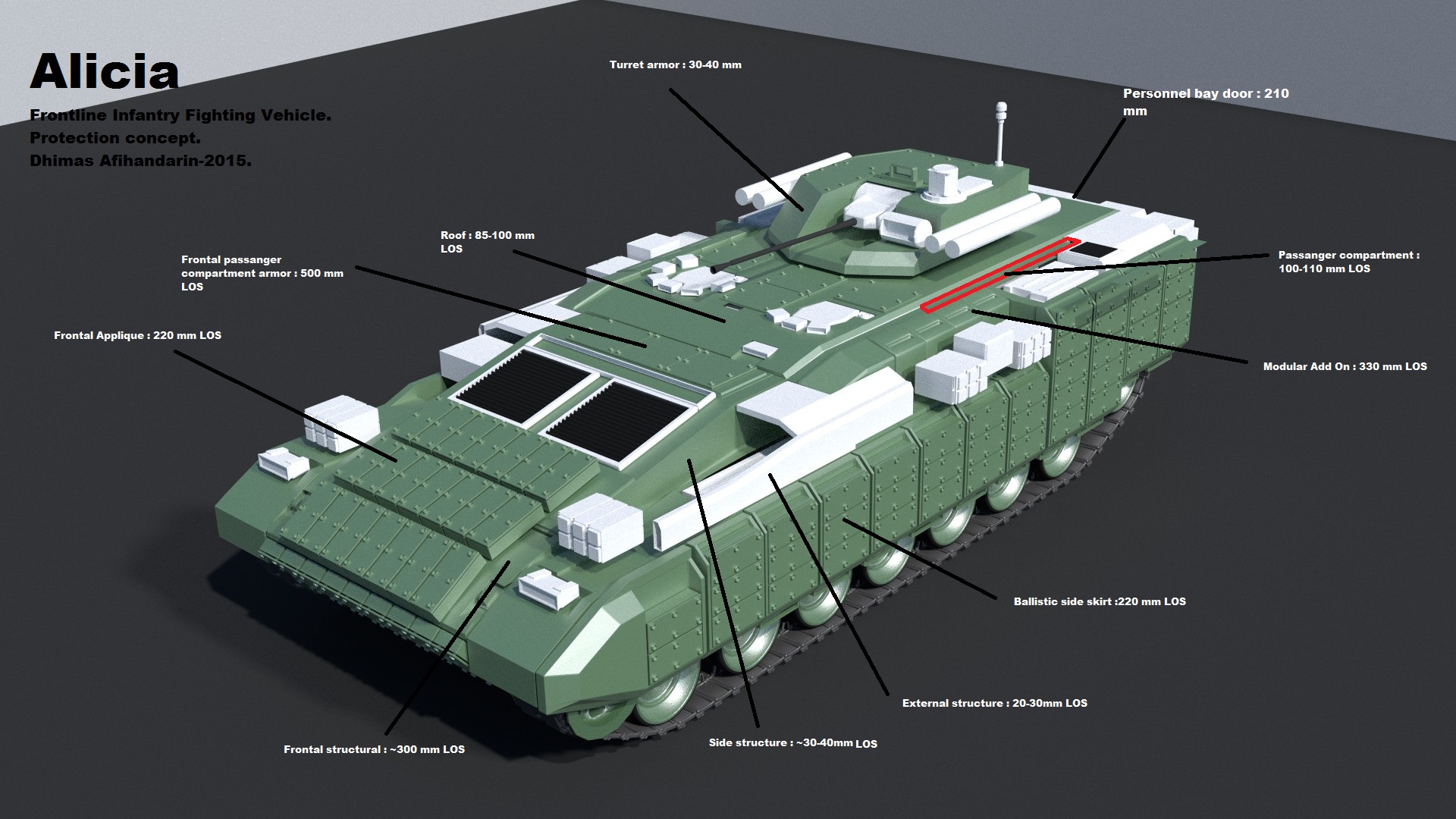 Your work is truly outstanding. Could you make a future infantryman? One with a futuristic full body armor (not a mech - rather Crysis-like) and with a full face helmet, at best if modelled after ancient Greek one.

Also - if you had AutoCAD or Autodesk Inventor, you could design real stuff.
Sponsored content