An African Yugoslavia: Is Ethiopia on the Brink of an Ethnic Civil War?

Ethiopia’s economy is among the most vibrant in Africa, with annual growth of 9.8 percent between 2008 and 2019. But the nation is made up of many disparate ethnic groups and there are fears it could come apart at the seams.

Heavy shelling has been reported in Ethiopia's Tigray region on Thursday, 5 November, and more than 20 Ethiopian soldiers are thought to have been wounded amid growing ethnic clashes.

A humanitarian source in Tigray told Reuters two dozen soldiers had been treated at a clinic near the border with the Amhara region.

Ethiopia's Prime Minister Abiy Ahmed, who won the Nobel Peace Prize last year for solving a border dispute with neighbouring Eritrea, has refused to halt a military campaign in the Tigray region which could spiral into civil war.

Federal troops clashed with Tigrayan forces in the northern region on Wednesday after Abiy claimed government bases had been attacked by the Tigray People's Liberation Front (TPLF).

The TPLF was the dominant political force in Ethiopia for more than 20 years but fell out with Abiy when he came to power in 2018.

​The US Secretary of State Mike Pompeo backed Abiy in a tweet on Wednesday.

Tensions between Addis Ababa and the TPLF have been escalating since September when Tigray held regional elections in defiance of the federal government.

Ethiopia is now in danger of collapsing into an ethnic civil war in a similar way to Yugoslavia in the 1990s.

​There have been numerous outbreaks of inter-tribal violence in the last year and at the weekend, gunmen killed 32 people and set fire to 20 houses in the west of the country.

The killings were blamed on a splinter group which has broken away from the Oromo Liberation Front.

​The country is an ethnic mixture of different tribes - Amhara, Oromo, Tigrayan, Somali, Sidama, Gurage, Wolayta and several others.

Emperor Haile Selassie, an Amhara, was deposed by a socialist military junta, the Derg, in 1974 and they ruled until the early 1990s when they were overthrown by a rebel movement, the Ethiopian People's Revolutionary Democratic Front.

​But most of the fighting was done by the TPLF, which was led by Meles Zenawi, who became Ethiopia’s President in 1991.

Zenawi and a Tigrayan clique ruled the country until his death in 2012 and helped turn the it around, from one of Africa’s basket cases to the continent’s most thriving economy.

He was succeeded by Hailemariam Desalegn, a Wolayta, who passed the baton on to Abiy, an Oromo, in 2018.

But as the power of the Tigrayans was reduced there was growing ethnic unrest, especially among the Oromo, who make up a third of the country’s population of 114 million. 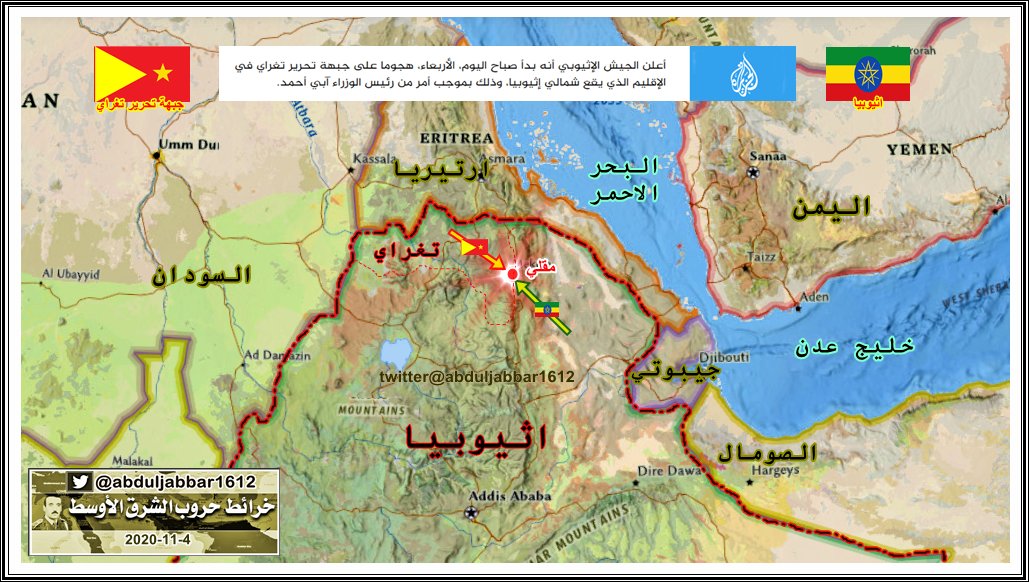 The Ethiopian government has taken control of Adigrat, a town located in the Tigray Region, authorities said on Saturday, as quoted by Reuters.

We have edited the map to reflect the battle map shared on Ethiopian national television by the army. The vast majority of these claims have not been visually confirmed and thus are marked orange. If/when confirmed visually they will turn solid yellow. 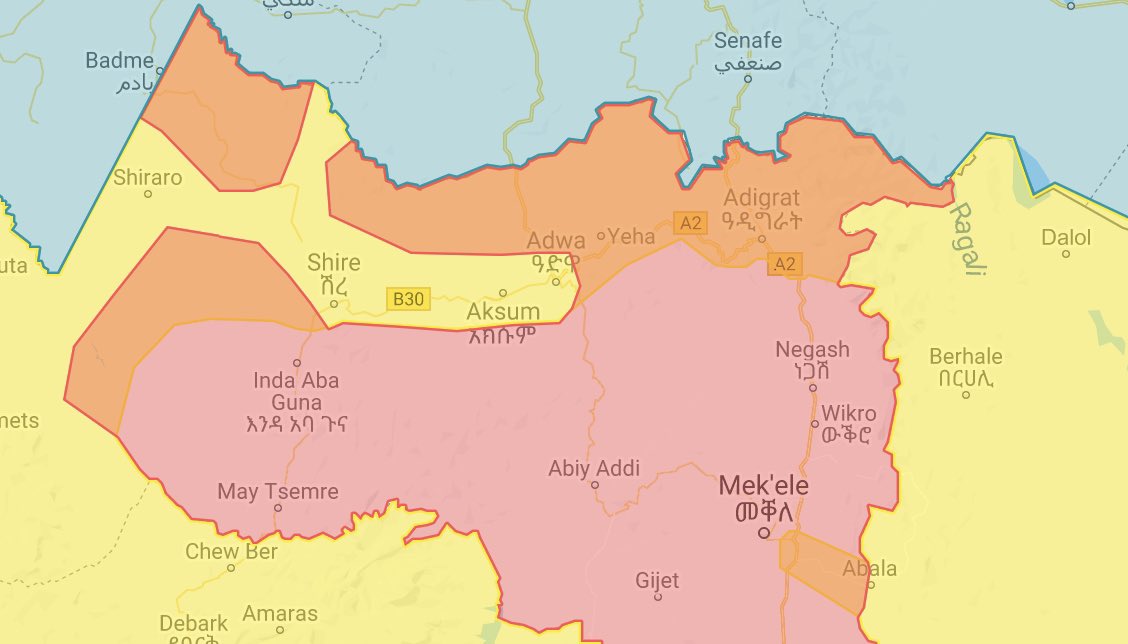 A feel-good headline on the BBC this week reads: “How a pariah and Nobel laureate became friends”. It was referring to the leaders of Eritrea and Ethiopia, as if their “friendship” was some kind of benign development to be lauded.

The feature article opens with: “In a sign of the changing political fortunes of a man who was once a pariah, Eritrea’s President Isaias Afwerki has proven to be a staunch ally of Ethiopia's Nobel Peace Prize winner and Prime Minister Abiy Ahmed, giving his troops much-needed support to fight the Tigray People’s Liberation Front (TPLF) in Tigray.”

The state-owned British broadcaster quotes the Ethiopian premier thanking Eritrea which “had fed, clothed and armed retreating Ethiopian soldiers when the TPLF first attacked them and seized their bases in Tigray, an Ethiopian region which borders Eritrea.” The BBC went on to note: “This was a significant acknowledgement by Mr Abiy, though he did not go as far as to admit claims that Mr Isaias, had also sent troops to help defeat the TPLF, a long-time foe of the Eritrean leader who has been in power since 1993.”

This is how the BBC and other Western media outlets are spinning cover for what is really going on in Ethiopia’s northern Tigray region. There is an ongoing genocidal war of aggression against the Tigray people by the Abiy regime which is referred to as the Ethiopian “government”. Abiy was never elected. He took power in early 2018 as part of a backroom political deal.

In his effort to crush the political opposition represented by the Tigray people and their political leadership, Abiy has enlisted the full military support of Eritrea to invade Tigray along with Abiy regime forces.

Eritrean military and paramilitaries are deep inside Tigray territory, killing civilians and looting the towns and villages with the collusion of the Ethiopian so-called Nobel laureate.

Abiy’s claims of launching a “law and order operation” to round up the Tigray “junta” which began on November is a sick joke. What was supposed to be a quick operation in the national interest has escalated into an ongoing guerrilla war which has seen millions of impoverished people turned into refugees internally and externally, with up to 45,000 fleeing to neighboring Sudan.

Sources in Tigray have confirmed the presence of Eritrean brigades – some even wearing Ethiopian national military garb – working alongside Abiy’s regime forces. Towns and villages have been shelled from Eritrea and hit by air strikes carried out by the Abiy regime.

The US State Department also stated that it had evidence of Eritrean forces deployed in Tigray region.

In the above BBC report it did refer to “unconfirmed claims” of atrocities carried out by Abiy regime and Eritrean forces.

Nevertheless, the main thrust of the BBC’s coverage has been to give more credibility to the version put out by the “Nobel-peace-prize-winning Prime Minister” Abiy Ahmed.

The reality is, however, that so-called laureate has ganged up with the Eritrean dictator to launch a genocidal war on the Tigray people. That’s what is really going on, yet the BBC would have us believe that these two de facto war criminals are “staunch allies” who have become unlikely “friends” as if it is a rosy story of political romance.
Since Abiy ascended to the premiership (and has postponed elections promised as part of his interim office), he has been waging a low-intensity war of aggression against the Tigray region. Electricity and water supply cuts over the past two years have worn the people down. Then he attempted a daring covert military operation on November 3 in collusion with Eritrean commandoes in the Tigray capital of Mekelle, according to local sources. The Tigray forces thwarted that offensive, which Abiy then fabricated as an unprovoked attack on the national army by “terrorists”.

The BBC and other Western media outlets have been dutifully spinning events in Ethiopia. Two years of hostility towards Tigray by the unelected Abiy regime has been spun as “reforms” by a “pro-democracy” figure. Now when this same figure is waging a genocide aided and abetted by a foreign army from Eritrea, the BBC is endeavoring to tell us this is a sign of “friendship”.
Shame on the BBC and other Western outlets who are silent in the face of huge crimes. Evidently, their condemnations only happen when it is politically expedient to undermine a nation which is an official enemy of Western governments.

Ethiopian C-130 carrying troops and ammunition was shot down by the TDF in the vicinity of Gijet this morning. Images taken from the crash site show that the aircraft was totally destroyed. There are no survivors.

This is the third visually confirmed airframe loss. 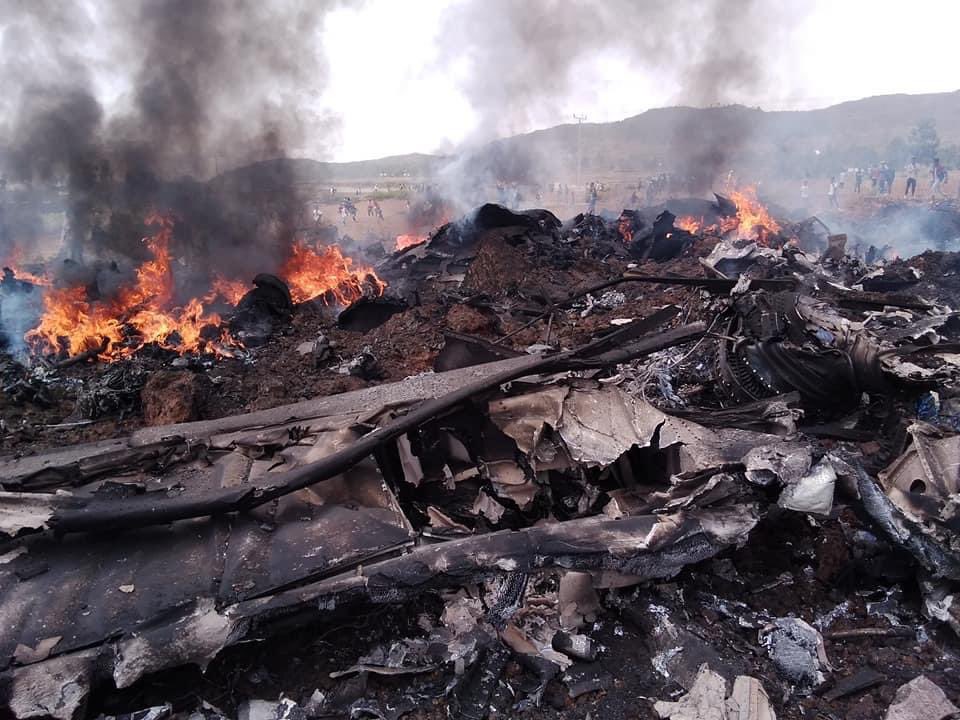