That's without support and weapons...

That's 14.5 billion $. And with the rest that you said it would be around 18.5 billion $. You can double that if you take into account support infrastructures, training and weapons.

They can be happy if they manage to buy 2 S-400 and 24-48 jets in total. US will still impose sanctions on their oil as long as they are a threat to Israel.
Mig-31BM2 Super Irbis-E

PMU2 is from PM2 stocks of the Russian army, so it uses PMU2. Therefore much cheaper.

A Su-30SM2 should cost around 45 million per unit at 48 units. Everything without weapons. Like India, Algeria hardly pays any more.
Isos

PMU2 is from PM2 stocks of the Russian army, so it uses PMU2. Therefore much cheaper.

A Su-30SM2 should cost around 45 million per unit at 48 units. Everything without weapons. Like India, Algeria hardly pays any more.

Russians won't sell PM2. Even the ones given to Syria are operated by Russians and were given only to protect russian troops.

If Iran wants to buy something they will buy trough Rosoboronexport from Almaz Antei either s300VM or S400.

India pay its MKI almost 80 million $ but that include local production, french and israeli stuff and much better radar than Algerian or Vietnamese su30. They can have a MK2 with an older radar for 40 million $.

Iran has already received PMU2 from Russian stocks. He wants to get either S-400 or PMU2. Nothing else. PMU2 is much cheaper from PM2 stocks and Iran already has the system in operation.

Like Pakistan, Iran can also manufacture the FC-1 itself. He gets the components from China and is good. So he can stretch the costs over 10 years and would pay for that in oil anyway. See the $ 400 billion deal that should also include military components.

Iran needs a command aircraft for the small front fighter FC-1 to complement its F-14A. A Su-30SM2 can and will do this excellently. An SM2 is the right part for the F-14A. The Mig-29M2 would be the workhorse with the FC-1. Inexpensive and effective for national defense.
medo

Iran have different priorities, than what we have. Iran will be more interested in ships from China and maybe from Russia. Iran want to have their domestic complexes, not imported, which are vulnerable on sanctions. Maybe they could buy a regiment or two of S-400 and few squadrons of Su-30SME to replace F-14A and for transport planes, which could be converted in air refueling and AEW planes. For the rest, they will rather build domestic planes and air defense complexes.

JF-17 (FC-1) is not that interesting for Iran, they already have similar Kowsar from F-5. They could be only interested in production of RD-93 engine in Iran and to instal that engine in reshaped F-5 and got their own version of F-20.
GarryB

JF-17 (FC-1) is not that interesting for Iran, they already have similar Kowsar from F-5. They could be only interested in production of RD-93 engine in Iran and to instal that engine in reshaped F-5 and got their own version of F-20.

That would be interesting... new radar.... new missiles... and an engine that has commonality with the MiG-29s... new and used...

F-5 was a good little aircraft that was used to embarrass new American pilots flying their latest types in Top Gun training...

With a new avionics suite, a new engine and a new radar it has serious potential as a light fighter.
JohninMK

F-5 was a good little aircraft that was used to embarrass new American pilots flying their latest types in Top Gun training...

With a new avionics suite, a new engine and a new radar it has serious potential as a light fighter.

It got some of that when one of the US aggressor companies in the US upgraded theirs, last year I think.
JohninMK

All the comments to date have been about imports. Don't forget that the embargo lifting is bidirectional.

What will be the first product that Iran EXPORTS and to who?
crod

https://financialtribune.com/articles/national/105639/engagement-with-iran-in-eu-s-strategic-interest (This is a good one)

JohninMK wrote:All the comments to date have been about imports. Don't forget that the embargo lifting is bidirectional.

What will be the first product that Iran EXPORTS and to who?

Not sure but a ship might well be intercepted at sea by the Americans?? Or the ship mysteriously sink. I dont think they'll do anything until the election is over. If they do it will test the american go it alone policy that's for sure.
Tsavo Lion

If Azerbaijan is forced to join Russia or Iran, all its weapons can then be sold to or grabbed by Iran.

Here is the first biggie, IRBM from NK for oil, protected by China. This will really wind up the US, their two biggest targets getting together again.

Following the end on the 18th of October of the 13-year United Nations’ embargo on Iran buying or selling weapons, the roll-out of the military component of the 25-year deal between China and Iran will begin in November, as exclusively revealed by Oil Price.com. After a series of meetings in China on the 9th and 10th of October between Iran’s Foreign Minister, Mohammad Zarif, and his China counterpart, Wang Yi, this military component may now also feature the deployment in Iran of North Korean weaponry and technology, in exchange for oil, according to sources very close to the Iranian government spoken to by OilPrice.com last week.

Most notably this would include Hwasong-12 mobile ballistic missiles, with a range of 4,500 kilometres, and the development of liquid propellant rocket engines suitable for intercontinental ballistic missiles (ICBMs) or satellite launch vehicles (SLVs). This will all be part of a broader triangular relationship co-ordinated by Beijing and further facilitated by the imminent launch of a new digitised currency system by China.

History is a bitch... I remember in the 1980s when Saddam "gassed his own people" in the west it was barely mentioned... to start with they blamed Iran for the attack but it soon became clear it was Saddam gassing Kurds who opposed his rule so obviously they weren't his people... they were his enemies and the world moved on and nobody really cared very much.

Invasion of Kuwaite at the start of the 1990s and Saddam becomes the bad boy so any and all dirt is dug up and smeared all over him by the attack dogs... sorry, the western media... he gassed his own people... what a monster...

WTF am I blabbing on about... well not long ago some Kh-55 missiles were sold by the Ukraine to Iran and to China I believe, but Ukraine was anti Russia so they were the golden haired boy... like Saddam when he gassed the Kurds he was fighting Iran... the bad guys so he was the golden haired boy too.

Iran is never going to be the golden haired boy... unless the CIA manage a regime change again, but what happens when Ukraine is no longer the favourite flavour of icecream... the taste as not been popular for a while now because they are not useful for the US really... Russia didn't fall for the bait and start a bloody war and they even seized the whole peninsula of the Crimea from HATO who wanted Russia out of Sevastopol...

In terms of SAMs I would think Iran would benefit more from licence production of missiles rather than just buying batteries... and small missiles like TOR or Pantsir in enormous volumes along with Igla-S would be useful against drones and low flying missiles...
Isos

Set off from Tehran Imam Khomeini International Airport in the early hours of the morning local time (Iran).
JohninMK

Set off from Tehran Imam Khomeini International Airport in the early hours of the morning local time (Iran).

Bit of a conclusion to jump to?
Isos

They already said they could buy iranian BM once the embargo gone and some "official" source told CNN US may destroy the BM being shiped there.

It's not sure at all but it's likely it carries BM.

Some reports said Caracas bought chinese anti ship missiles too as response to US selling cruise missiles to Taiwan which supposes a quick rearment with offensive weapons agaibst a US landing in Venezuela.
JohninMK

JohninMK wrote:Do we know if the 747 was a freighter? 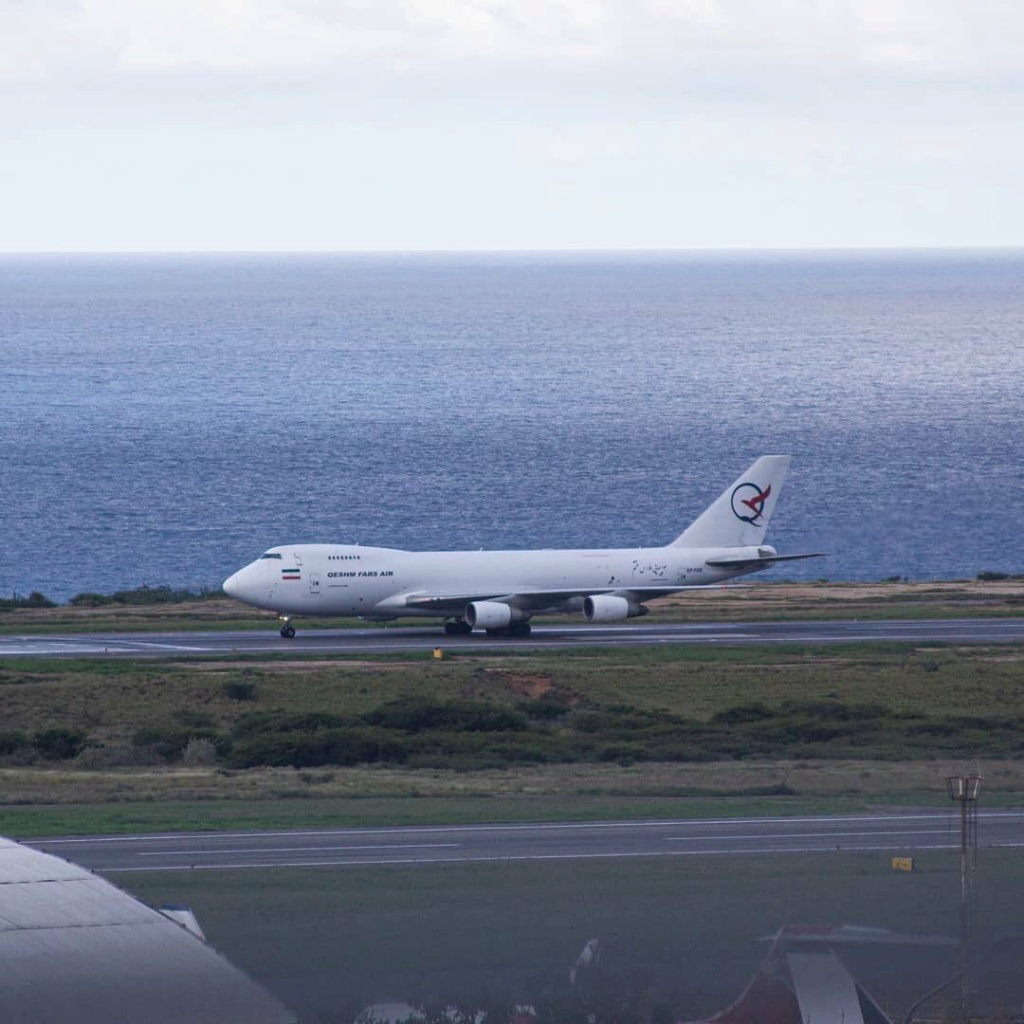 Bit of a conclusion to jump to?

Wave the WMD flag around the place so you are then free to do as you please.... shoot down airliners... board and steal ships... invade countries... and ten years later when it is proven conclusively that you were wrong... who gives a shit... what are you going to do about it?
nomadski

Of course Iran could ship missiles. No law against that. Or it could sell plans for missiles. And sell machine tools and Engineers. The Venezuelans can make own missiles. As many as they like. Even a few hundred precision strikes, will bring US to it's senses. The Dollar will probably crash. Wall Street will close shop. Iran could also help in building a Nuclear power plant. And help look for Uranium ore . For peaceful purposes. Venezuela could then export more of it's oil. I read that plane carries repair equipment for oil industry.

I read that plane carries repair equipment for oil industry.

Which would be more useful to Venezuela and equally a more important target for the US to stop the transfer...
crod

If Iran can come up some payment method acceptable to Russia - the latter should give Iran whatever it wants now imo.
Mig-31BM2 Super Irbis-E

There should be soon a larger drone as well as soon as Russia finishes certifying the turboprop engines VK-800 and VK-650.

Actually Russia could sell one of these 2 engines to Iran for their newest drone (the shahed 149).

There are surely other goods Russia and Iran can trade.
Just to make an example, there are a lot of agricultural products that can be provided from Iran and Russia could actually import more fresh Iranian fruits (e.g. instead or in addition to Azerbaijani ones). I even find pistachios and carpets more interesting Iranian products for Russia than combat drones that would go in the same niche as Russia currently produces.


Russia has no needs to add a foreign UAV in its military with similar characteristics to what it is already in service... If it was 10 years ago it would have been different, of course, since Russia started late with drone development in comparison to other countries (even if Soviet Union was a pioneer in the area).


I believe iran has also large copper reserves. This is another interesting trade possibility.

Note: I know that Iran has its own  manufacturing capabilities and an even better manufacturing potential. It is just that Russia already has its own and they overlap.  It would have been different of course if Iran was a leader in microelectronics...

However I find cooperation in the industrial sectors (e.g aerospace and automotive, but not only) both possible and mutually beneficial.