Sweden's Bigger Badder Gripen Fighter Packs A Lot Of Punch In An Incredibly Efficient Package
Sweden took an evolutionary approach for its next fighter, carefully picking the features that would make it not just relevant, but also affordable.
George1

On February 17, 2021, the Defense Security Cooperation Agency (DSCA) of the US Department of Defense sent a notice to the US Congress of the planned upcoming sale to Finland under the US program of intergovernmental foreign military sales Foreign Military Sales (FMS) of long-range guided missiles ER GMLRS (Extended Range Guided Multiple Launch Rocket System) with a range of up to 150 km manufactured by Lockheed Martin for use from launchers of American MLRS multiple launch rocket systems. Fighting vehicle М270С1 of the American multiple launch rocket system MLRS (RsRakH 06) of the Finnish army, November 2020 (c) Defense Forces of Finland

Sweden has signed two contracts for its Visby stealth corvetts. The first is for modify the current vessels with upgraded rbt15 missiles, the new type 45 torpedo and adding anti-air missiles with the Umkhonto missile system.
The second contract was the first definition fase of a replacement of the present corvetts, curently named Visby: second generation.

Gessing Swedish Kockums isnt happy about that, hoping they would sell the new Type-26 submarine to them.
walle83

The system was cut from the Swedish defence in the early 00s becouse of budget restraints but remained in the reserv. In 2019 it was reported that the system was being upgraded and now its returning to service.

Swedish BAE Hägglunds with its latest vehicles of the CV90 platform.

Before coming into effect, the agreement will have to be ratified by Norway's parliament. In February, US B-1 strategic bombers arrived in Norway to conduct training missions, making this the first time American planes have operated in the Scandinavian country.

The United States and Norway signed a revised deal on Friday allowing the US military to set up its own facilities on Norwegian soil, according to an announcement from Norway.

US armed forces will be permitted to install facilities at three airfields and a naval base. However, Norway specified that the deal does not provide for the establishment of military bases in the country.

The development comes after the United States carried out its first training mission in Norway with its B-1 strategic bombers in February.

The manoeuvre was intended to test warplanes in the north and improve their interoperability with allies.

Russian Foreign Ministry previously said that Oslo's intention to deploy US strategic bombers at its airbase near Trondheim was seen as another step toward increasing military activity in the region.
walle83

Saab offers 64 Gripen E fighters to Finland and the possibility to manufacture the plane themself. Saab also include the Erieye radar system in its offer.

Rob Lee
@RALee85
·
5h
The Finnish Defense Forces released an intelligence review for 2021, including this infographic with the military forces in the Baltic and Nordic regions. They estimate that Russia has 900k active servicemen and a ~20 brigade strength in Western Russia.
https://puolustusvoimat.fi/documents/1948 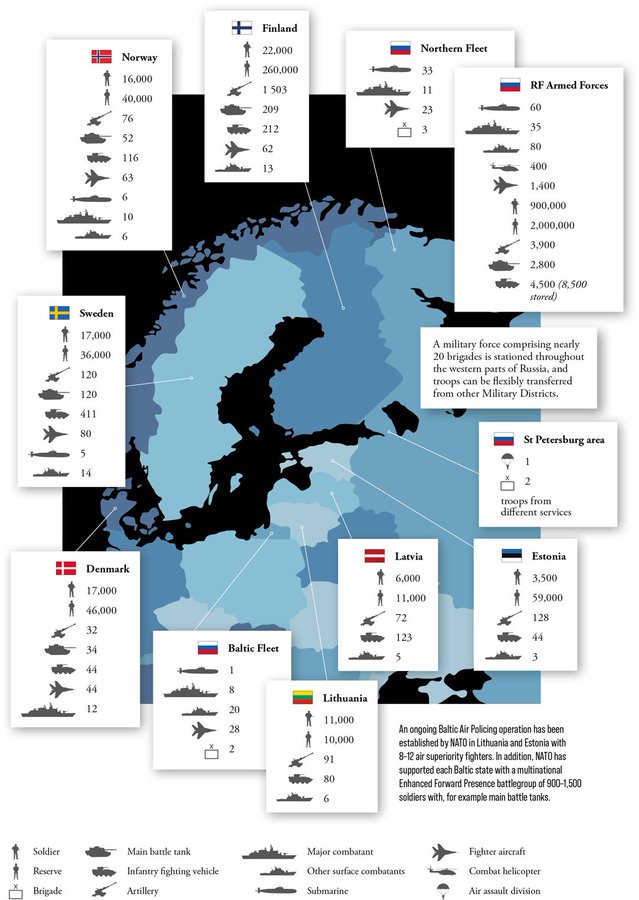 First vehicles for the Patriot AA system has been deliverd to the Swedish Armed Forces.

Sweden replaces the Saab 105 jet trainer with the new turboprop trainer Grob G 120TP. 7 aircrafts has been orderd so far with first delivery in 2022.
The Grop G will be used as a basic trainer and the Gripen D as a advanced jet trainer. 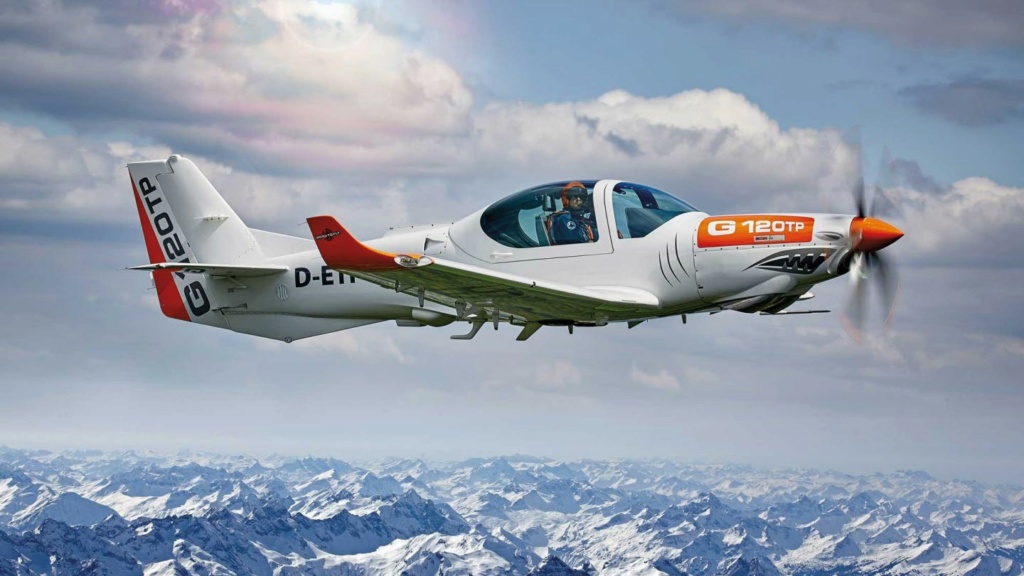 Sweden plans to step up its defence over the next 10 years.

Army:
Exbands from todays 2 active brigades up to 4 (1 slightly reduced to begin with).
The artillery gets a new regement and goes from todays 24 Archers systems to 48. 72 might be orderd in total.
2 new Infantry regements  is set up in the Northen parts.
K4 ranger regement is reactivated in Arvidsjaur, special units for artic climate fighting and reconnaissance.
All Strv 122 (Leo 2) and Strf 90 (CV90) gets modified and updated.
The Patriot missile system will continue to be deliverd and in full service by 2025.
Cyberdefence will be focused on and new military cyberunits will start to be developt from 2022.

Navy:
All 5 Visby class corvetts gets updated with AA missiles systems, the new Type-47 torpedo, new sensors and updated radars and a new version of Rb-15 will be orderd.
2 Gotland class submarines gets updated.
The new Blekinge class submarine will be deliverd to the navy in 2025-2030.
2 new surface vessels will replace the Gävle-class corvetts by 2030, additional 2 more vessels will de deliverd after 2030.

Air force:
6 fighter divsions will remain during the period.
Parts of the C/D versions of the Saab Gripen will remain active to after 2030. (earlier expected to be retired by 2025)
Saab Gripen version E will start de be deliverd after 2022.
A new basic trainer will start to replace SK60 (Saab 105) from 2022.
A new (ATA) jet-trainer will replace the two seated Gripen D after 2030.
TP84 (Hercules) will be modified and kept in service.
walle83

Clip from last year when Sweden tested the Rb15 from air, sea and land.

Sweden has officially the Patriot missile system. The system went on active service on November 18, 2021.

On November 18, 2021, a ceremony was held for the transfer of the first complete battery of the American Patriot Advanced Capability-3 + ( PAC-3 +) (Swedish designation Luftvärnssystem 103). The ceremony was attended by Swedish Defense Minister Peter Hultqvist and the Swedish Army Command and the 10th Air Defense and Missile Defense Command of the US Army in Europe.

Saab is ready to deliver the first JAS 39 Gripen version E.
6 fighters are finished and will be deliverd to the Swedish and Brazilian Air forces.

Finland is leaning to buy the F-35 for its airforce. Making Swedish Saab somewhat disappointed not selling the Gripen E to its neighbour.

walle83 wrote:Finland is leaning to buy the F-35 for its airforce. Making Swedish Saab somewhat disappointed not selling the Gripen E to its neighbour.

Considering Gripen's price tag I'm amazed anyone bought it at all, same for Rafale

walle83 wrote:Finland is leaning to buy the F-35 for its airforce. Making Swedish Saab somewhat disappointed not selling the Gripen E to its neighbour.

Considering Gripen's price tag I'm amazed anyone bought it at all, same for Rafale

Well the F-35 aint cheaper thats for sure.
The Gripen also seems to be high on many lists, often beating both the Super Hornet and the Eurofighter.

Canada is next, and the F-35 and Gripen is the only ones remaining there.
GarryB

Well neither fighter is going to make the Russians run away in fear, but the Gripen is not going to bankrupt them in operational costs... hopefully they all buy F-35s.

With the US talking about putting F-15s back into production the pressure will be on for the hard sell to sell as many F-35s for export as they can before the bubble bursts... lots of nudge nudge wink wink that have very little to do with the aircraft themselves and more to do with relations between countries.
George1

WASHINGTON – The Finnish government has picked the F-35 as the replacement for the country’s F-18 Hornet fleet, known as the HX program, according to a Ministry of Defense statement.

The decision settles one of the last remaining lucrative fighter competitions in Europe, with Lockheed Martin’s offering once again coming out on top. In June, the Swiss also picked the plane, marketed by Lockheed as a stealthy plane with novel sensor-fusion capabilities.

The Finns have budgeted a maximum of 10 billion euros for the HX program, or roughly $11.3 billion. The cost for 64 F-35 A Block 4 planes is estimated at 4.7 billion euros, while a stash of AMRAAM and Sidewinder air-to-air missiles will come in at 755 million euros and a maintenance services package through 2030 will cost 2.9 billion euros.

Lockheed’s plane beat out four other competitors: Boeing’s F-18 Super Hornet, Dassault’s Rafale, the Eurofighter Typhoon and Saab’s Gripen. The evaluation process saw the F-35 “pass” the selection criteria of security of supply and industrial participation and affordability, according to the MOD statement. It also scored highest in the military capability area.

Lockheed Martin was quick to point out in a promotional video posted on Twitter that the Finnish decision makes it the ninth country in Europe to pick the contractor’s fifth-generation fighter jet. The move means competition in the backyards of local manufacturers Airbus, Dassault and Saab has heated up even more.