If a Russian system can be integrated into the Russian AD network I don't think they would care if it is compatible with a NATO network... and even with Turkish hardware I doubt NATO would allow them access to a NATO system.

Look at the ABM systems as an example... they wont want a shared system, they will want two separate systems that share info.

I suspect these systems were just for testing and I rather doubt there will be purchases in the future.
GarryB

Russia will not stock up on foreign-made arms - Medvedev


President Dmitry Medvedev said on Monday that Russia would only buy small amounts of foreign-made weapons.

Speaking during a meeting with army servicemen in Vladikavkaz in southern Russia, Medvedev said Russia may buy only some foreign-made arms “so that we have an idea of how foreign armies are equipped and that our producers can make the best arms.”

“Make no doubt about it, we will continue equipping the army,” he said. “We have significant, unprecedented, large amounts of money to that end.”

The Russian government has pledged 22 trillion rubles ($730 billion) for its state arms procurement program through 2020.

So, by those words from Medvedev, Russia could actually buy few examples of Zipkin like one battery of 6 vehicles for evaluations and for air force training, where it could simulate Avanger, Aspic, Ozelot, Zipkin and other similar western SAMs.
GarryB

I suspect the suggestion on wiki that Russia will buy the system and put it into service is based on the fact that they have already bought a small batch for testing.

I rather expect the further acquisition of such systems would be very unlikely and when testing is complete because these are not armoured vehicles that could be used for weapons testing I would expect some backwater unit will get them equipped with Igla missiles of course, and they will use them till they are worn out at which time they will not upgrade them, they will simply discard them and upgrade to the contemporary Russian system... likely strelets... which will likely have been given an upgrade based on the new ideas taken from testing and operational experience and of course their own ideas and expertise.
Austin

The Janus Faced new Radar of Pantsir-S1 is a PESA and not an AESA.

Merry Christmas to all

Merry Chistmas to all

Isn't this the same stuff as the Russian Dzhigit system? WTF why does Russia even need to evaluate something like this? It sounds like quite basic technology.
GarryB

I very much suspect they are only interested in evaluating it as a system.

I very much doubt there is any intent to purchase, but even if they did buy it because it had some super effective feature then they would use the launcher with Igla-S rather than a foreign missile.
medo

flamming_python wrote:Isn't this the same stuff as the Russian Dzhigit system? WTF why does Russia even need to evaluate something like this? It sounds like quite basic technology.

MANPAD and thermal imager is not something Russia doesn't have. Zipkin is from Turkey and Georgia is very much connected to NATO IADS through Turkey. I more think Russians evaluate Zipkin to get an eye on Turkish IFF, which also Georgia got and data com with C4I. This system also could well simulate NATO air defense complex in drills with NATO compatible C4I.
GarryB

I think evaluation is the key... they evaluated the M16s and Negevs they captured in Georgia... and the US Humvees.

Can't see there being any orders.

Even the Georgian troops left the M16s and Negevs in storage at their bases and drew their standard soviet small arms for combat...
GarryB 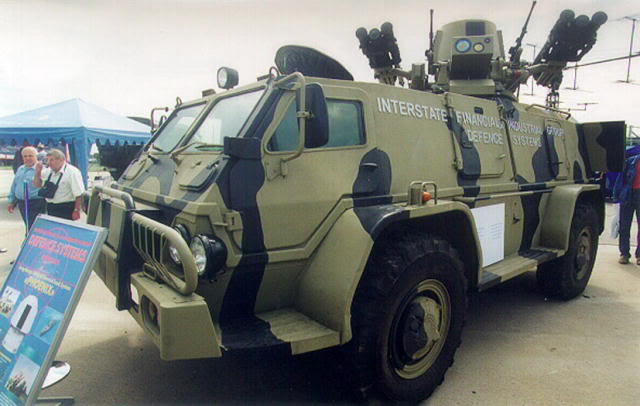 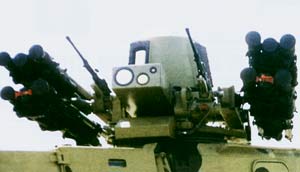 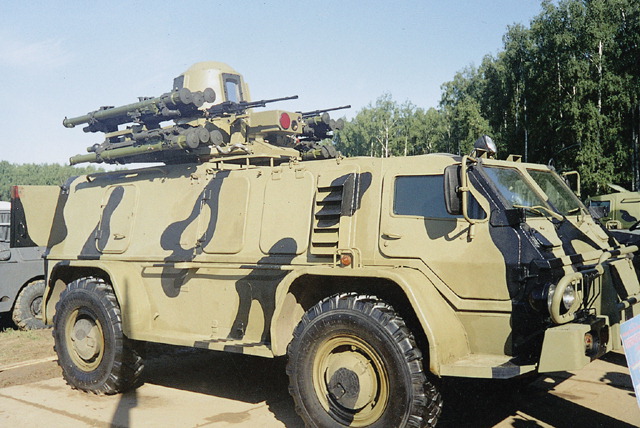 Any info on that RWS?
GarryB

It is called Phoenix (fennics) and uses passive sensors with 360 degree coverage for the FLIR sensors in the turret which are used for search and detection and the box with digital video and s thermal imager and used to inspect the target and identify and engage with either 12.7mm HMGs or Igla Manpads.

Here it is mounted on a Vodnik, but it can pretty much be mounted on all sorts of vehicle platforms.
medo

Here it is mounted on a Vodnik, but it can pretty much be mounted on all sorts of vehicle platforms.

I think Volk would be great with Phoenix AD module. 6x6 version would be big enough for additional reload missiles.
GarryB

I agree, but it looks to me like the new missile arrangement with four missiles instead of two blocks the view of the main 360 degree sensors. Perhaps an improved sensor arrangement might be an improvement.

I remember that the SA-13 also had all sorts of sensor boxes fitted to it that were designed to detect radar and radio emissions... like terrain following radars and radio altimeters used on aircraft and missiles to prevent flying into the ground in bad weather and at night.

These sensors are passive but useful to alert the system that something is coming and which direction to look to find it without emitting anything and giving away your presence.
medo

I read, that Russians want to install Komar turret with Igla SAMs (similar to naval Gibka) on Tigr vehicle. Any more news about this Tigr version or about Komar turret?
GarryB

I haven't heard anything, but it would make sense to use the technology this way rather than introducing all sorts of different things all doing ultimately the same thing.

I would suspect the stabilisation systems on the Gibka would be fairly good to allow its use in rough sea conditions. Transfering that to the land vehicle might enable fire on the move capability. 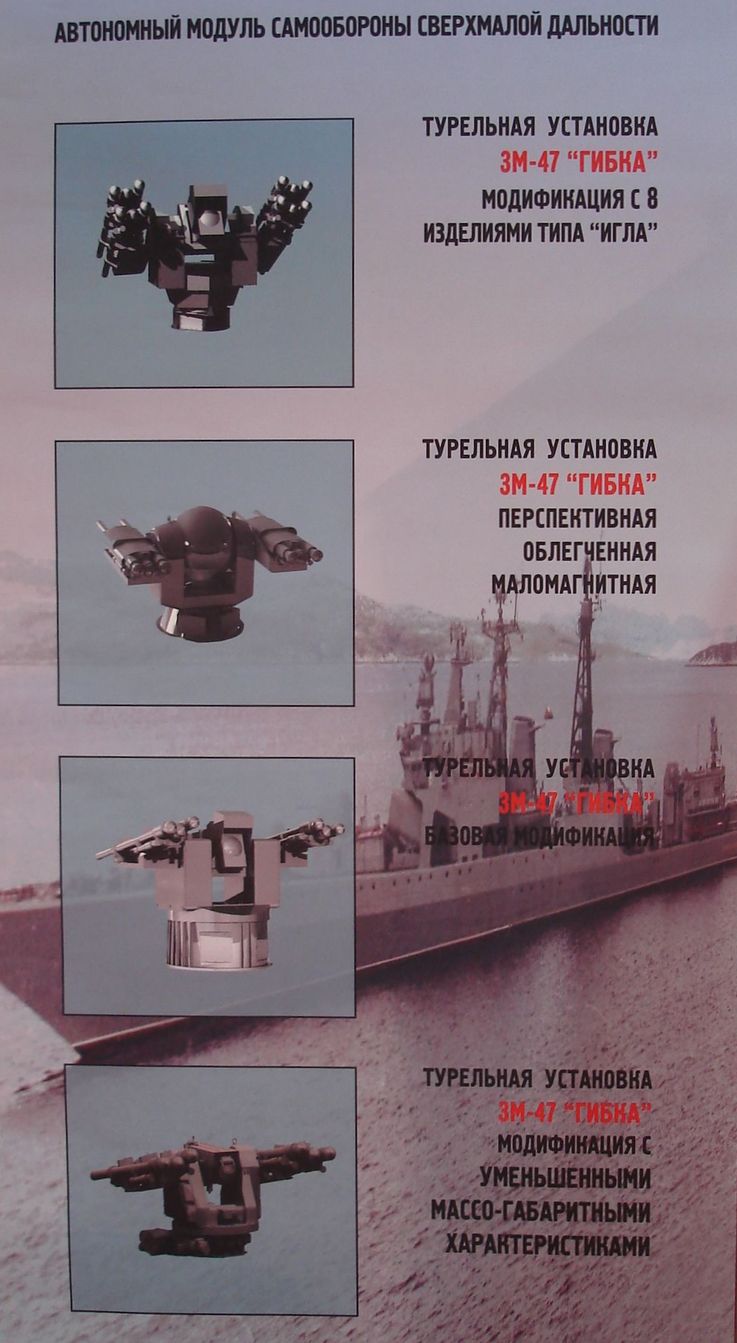 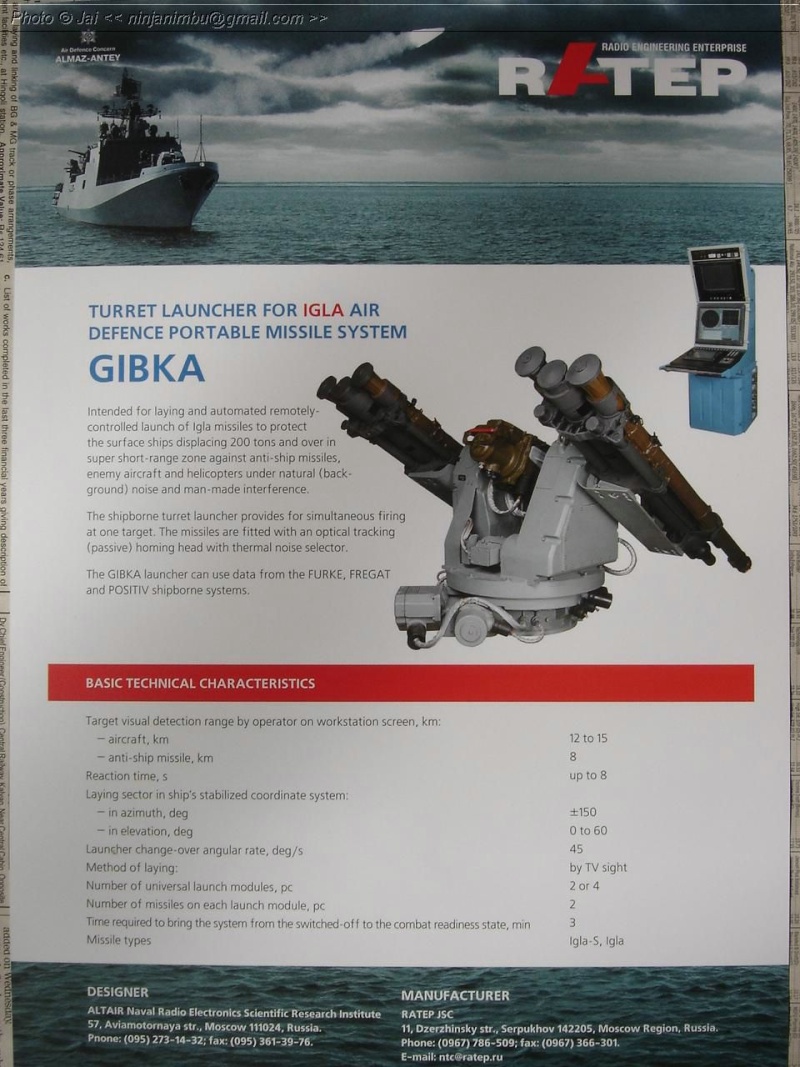 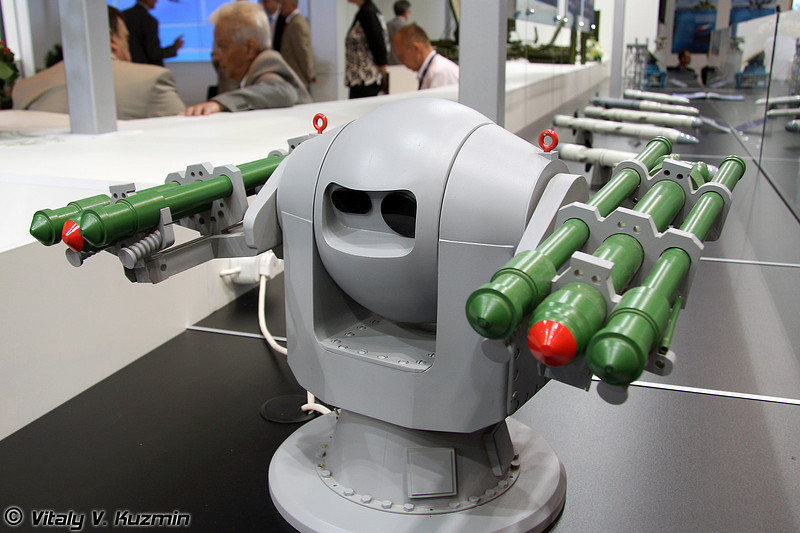 This one could be just excellent on two seat pick up version of Tigr.
GarryB

The problem I have with most of those launchers is the missile modules don't look very strong and appear to sag.

Unless they have an auto reload function I would like to see more solid looking pods with 6 to 8 missiles on each module.
medo

GarryB wrote:The problem I have with most of those launchers is the missile modules don't look very strong and appear to sag.

Unless they have an auto reload function I would like to see more solid looking pods with 6 to 8 missiles on each module.

Igla MANPAD is not that heavy, because one man could carry it and use it. Strelets module is strong enough to carry 4 Igla missiles. Gibka turret on the photo is a model, but considering the size and assuming, that missile carrying army are from steel, they are strong enough to carry those missiles. On the other hand I agree with you, that it looks strange, that Strelets module have placed missiles under angle and not horizontally in line.

The southern command under the gosooboronzakaza began to receive the first anti-aircraft guns and missile complexes of Tunguska, the press service of the southern military district.

"Connection motor-rifle adopted by the southern military district in the Volgograd region received anti-aircraft cannon and missile complexes" Tunguska ", reads the statement, received by Interfax-AVN" on Monday.
According to the press-service of ÛVO, unlike other PANTSIR-S1 anti-aircraft Tunguska possesses a solid area of the horizontal command 360-degree corner and corner of elevating cannons. Has radar-optical fire control system. Onboard radar permits a circular target detection at a distance of up to 18 km.

Since the detection of the target before finishing its crew to strike 6-8 sec. Combat vehicle has a navigation system, as-built and guide for positioning.

Hydromechanical transmission and hydropneumatic suspension with adjustable ground clearance ensure high cross-country ability and, despite the mass of 36 tons, ride on rough terrain, allowing you to build and effectively hit targets on the move.

Range of 30-mm cannons up to 3 km, the rocket is controlled from the start of range from 15 to 3500 m, stated in a press release. The crew of 4 people. "Complex is intended for conducting air defense infantry and tank units on the March and in all forms of combat, provides low-flying air targets defeat," the press service said.

Should be noted that these figures are not range, but altitude performance figures against aerial targets.

Horizontal range for the guns is 4km and the missiles is about 10km.
Cyberspec

George1 wrote:The southern command under the gosooboronzakaza began to receive the first anti-aircraft guns and missile complexes of Tunguska, the press service of the southern military district.