Given its date of completion I would not doubt it is at least as modern as Akula-2, save export regulated stuff.
From what I have read even classifying the class into Akula 1 and 2 is inaccurate, since the Bars received updates with almost every new boat.
GarryB

From what I have read even classifying the class into Akula 1 and 2 is inaccurate, since the Bars received updates with almost every new boat.

Like the joke about the Tu-160... they were built during a period of improvement so each aircraft got something that was better than the previous aircraft had... they said no two aircraft were the same.

Hopefully they will develop a midlife upgrade for the Akulas based on the Yasen Ms stuff hopefully, as that will mean more commonality of weapons and sensors.

Obviously the Yasen M has its torpedo tubes moved to amidships so the large frontal array sonar will be too big to retro fit into older SSNs, but a scaled down slightly cheaper model might be useful.
Austin

Well there are two critical things that Indian Akula lack.

One is the non-acoustic sensors SOKS
Another is the tube above torpedo tube for decoys.
They dont have 650 mm TT but only 8 533 mm tubes.

All in All there are differences , I am not sure if there are actually Akula-2 class.
Austin


In short, the modernization will be a major - a new project to 971M. In carrying out these works will be used to achieve the latest academic and applied science, including overseas. Complex systems of communication, navigation, speakers and other modern means of communication, set on a ship, a number of parameters exceed even those that are installed on the fourth-generation nuclear submarines.

Despite its large size, the Akula-class sub is very stealthy.

A Russian nuclear-powered attack submarine armed with long-range cruise missiles operated undetected in the Gulf of Mexico for several weeks and its travel in strategic U.S. waters was only confirmed after it left the region, the Washington Free Beacon has learned.

It is only the second time since 2009 that a Russian attack submarine has patrolled so close to U.S. shores.

The stealth underwater incursion in the Gulf took place at the same time Russian strategic bombers made incursions into restricted U.S. airspace near Alaska and California in June and July, and highlights a growing military assertiveness by Moscow.

The submarine patrol also exposed what U.S. officials said were deficiencies in U.S. anti-submarine warfare capabilities—forces that are facing cuts under the Obama administration’s plan to reduce defense spending by $487 billion over the next 10 years.

The Navy is in charge of detecting submarines, especially those that sail near U.S. nuclear missile submarines, and uses undersea sensors and satellites to locate and track them.

The fact that the Akula was not detected in the Gulf is cause for concern, U.S. officials said.

The officials who are familiar with reports of the submarine patrol in the Gulf of Mexico said the vessel was a nuclear-powered Akula-class attack submarine, one of Russia’s quietest submarines.

One official said the Akula operated without being detected for a month.

“The Akula was built for one reason and one reason only: To kill U.S. Navy ballistic missile submarines and their crews,” said a second U.S. official.

“It’s a very stealthy boat so it can sneak around and avoid detection and hope to get past any protective screen a boomer might have in place,” the official said, referring to the Navy nickname for strategic missile submarines. .....

They have recently made statements to the effect that this story is not true.

It was probably Republican propaganda to try to yet again discredit Obama... it happened on his watch, and the US is looking at budget cutting and ASW stuff is the most expensive stuff in warfare.

Also note that this is a western source so they are not actually talking about the Akula class, which is actually called Typhoon SSBN by NATO. They are talking about either the Shuka class or the Bars class SSN which is called Akula or Shark by NATO.
TR1

Excellent. This will alleviate pressure to get 885 numbers up.
TR1

Note the 8x533 TT and the Close up of Screws

Thanks for lots of valuable imagery up there Austin.

oh BTW did this Nerpa is capable of launching KLUB missiles ?
Austin

Dont know for sure but I suspect yes it can fire Klub as Indian Kilos do.
TR1

Photo of Nerpa interior during fitting out.
George1

Caliber Cruise Missiles to Set in Russian Subs since 2013

In 2013, Russian defense ministry will start equipping of Project 971 Schuka-B and Project 877 Varshavyanka submarines with Caliber cruise missiles capable to hit land-based targets at the range of 300-2,500 km, reports Izvestiya.

According to the newspaper, "Russian Navy will thereby obtain a capability to attack land targets. By the way, the missiles are launched by common 533-mm torpedo tubes".

"It is practically impossible to intercept Caliber missile even by the most advanced air defense systems, including Russian S-300 and S-400. Salvo launch made by a suddenly surfaced submarine may destroy several key assets at once. This capability makes the subs earlier used only for naval engagement a versatile weapon", a source in Russian Navy Main HQ told Izvestiya.

At present, Russian Navy operates over 20 submarines of Schuka-B and Varshavyanka classes, reports the newspaper.

A high-ranking staff officer told Izvestiya that integration of Caliber missile into Project 971 nuclear submarine K-328 Leopard had been already started. The sub is under repairs at Sevmash shipyard since June 2011. Early in Nov, Caliber missile was successfully tested by its standard carrier, newest Russian Yasen-class submarine Severodvinsk.

According to Izvestiya, at first, the Caliber missiles will be planted in Project 971 submarines stationed at Northern Fleet. Then, analogous work will be done on Pacific Fleet' Schukas.

An informed representative of defense industry told Izvestiya that the first Caliber-equipped diesel-electric submarine would be B-261 Novorossiysk (Project 636.3) being currently built at Admiralteyskie Verfi shipyard in St. Petersburg. She will be followed by diesel subs Rostov-na-Donu and Stary Oskol in 2014-2015. After that, it is planned to plant Caliber missiles on Project 877 Varshavyanka submarines in service at Northern Fleet's 165-th brigade.

"It is also discussed to plant the new missiles on Lada-class submarines, in particular, on the lead sub St. Petersburg which is already built", writes Izvestiya.

Can anyone give me an accurate list of how many akulas are actually in servine with the russian navy? Jane's says there are 10. I tend to distrust.western analysts based on the bias I see in them. So if anyone can give me an accurate number that would be great.. thanks
TR1

stud-one wrote:Can anyone give me an accurate list of how many akulas are actually in servine with the russian navy? Jane's says there are 10. I tend to distrust.western analysts based on the bias I see in them. So if anyone can give me an accurate number that would be great.. thanks

Number is around 12 max @ best, so by Jane's standards they are not too far off.

I had a headcount of all the big nuclear boats and their status @ the time I made the list, gotta dig it up.
stud-one

Cool TR1 thanks for the info. Yes i meant project 971 Bars. If you can find that list that would be awesome to see. Cheers
TR1

Talk about a big drydock...
Austin

Wasnt Gepard labelled as the last Akula built by Russians which was considered very close in characteristic to 4th Gen Submarine and was fully or partially digital sub ? I remember Putin was there commisioning the Gepard.

I wonder how she performed in the almost 10 years she was operational ?
TR1 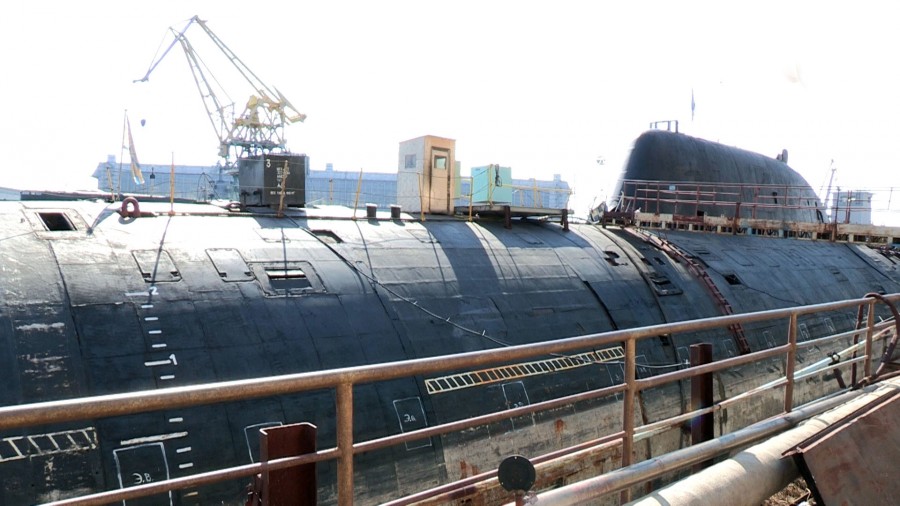 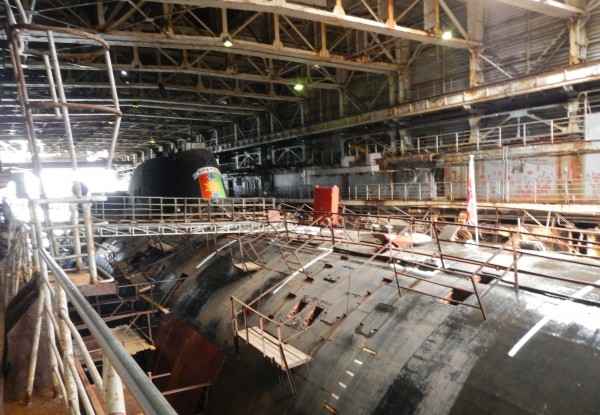 “The planned modernization schedule [for each boat] is at least three years,” Zvyozdochka general director Vladimir Nikitin said in an exclusive interview with RIA Novosti.

The first Akula-class boat, the Leopard, is already being upgraded at the shipyard, but the work on that vessel will take much longer compared with subsequent submarines because the development of the documentation and technological processes for the necessary repairs have not been yet completed, Nikitin said.

The overhaul will involve replacement of the electrical wiring, electronics, missile systems and other equipment. The upgraded vessels will also feature better “stealth” capabilities.

Together with Project 885 Yasen (Graney) class nuclear-powered vessels, they will constitute the core of the Russian fleet of nuclear attack submarines.

The third-generation Project 971 submarine was developed by the Malakhit Design Bureau in the 1970s-80s as an alternative to costly titanium-hull Sierra class vessels.

A total of 15 submarines were built from 1984 to 2001 at the Amur shipyard in Komsomolsk-on-Amur and at the Sevmash shipyard in Severodvinsk. It is not known how many of them are still in service, but one of the subs, the Nerpa, has been leased to India for 10 years under the name INS Chakra.

Akula-class submarines feature very low acoustic signatures and can carry up to 12 submarine-launched cruise missiles with nuclear warheads and a range of 3,000 kilometers (1,860 miles) in addition to anti-ship missiles and torpedoes.
TR1

Well, some clarity on the Barnaul- the ship is going to be scrapped.

Modernization will scale - up to 971M new project. It will affect all electronic weapons systems, as well as missile and torpedo complex. "Unfortunately work behind schedule, but so far it is not critical," - noted in the company.

"The main reason for the lag - systematic delay of design documentation from the designer SPMBM " Malachite ", - the press-service. - Ship for us a new and complex, it is impossible to foresee all, so many issues delayed by an average month." On the "Zvezdochka" restore only a small part of the equipment. Repair and manufacture of most of the ship's systems will be engaged in more than 30 contractors. "Following the first-born -" Leopard "in the queue waiting for the modernization of three more ships of this project: one from the Northern and Pacific fleets with two," - said the press service of "star."

I wonder if Russia is going to build more Akula or simply go for new generation of attack submarine.

Stealthflanker wrote:I wonder if Russia is going to build more Akula or simply go for new generation of attack submarine.

No excuses for you Stealth, no NATO names!

And no, they have shown no inclination or interest. Modernizing and repairing them is enough.
Sponsored content