KiloGolf wrote:Somebody explain to me how can SDF take 57 villages in eastern Raqqa province in less that 24 h?

Because the whole thing is a fraud. thats why.
French Journalist from Voltaire net ,have reports of how this "fights" against ISIS happens
not with guns ,but with a shake of hands and a transfer of lands. There is no real fighting going.
between Turkey/NATO and ISIS.  So the advance is only a circus.. Probably ISIS fighters change their banner to FSA and there you have there a "liberation".  In war ,the truth is the first victim.
And still today Erdogan trade oil with ISIS and apparently through Kurdish controlled zones in IRAQ.  So as i said before with no real fighting.. their speed is not real . because the whole thing is fake. Only Kurds in Syria are fighting Turkey.

About Russia strategy in Syria is the 100% liberation of it ,but at a very long term.
Turkey captured lands will have to be returned sooner or later ,a year or two or more ,because they will NEVER have control of the airspace of the lands they capture ,so Syria airforce can bomb any illegal military base or air defense deployed in Syria or Any Tank deployed by ERdogan. When ISIS is no longer in control of any part of northern Syria and Syrian army recovers most of its territory ,Syria will demand Erdogan army to leave and will give an ultimatum to remove its forces or else they will reserve right to bomb its invading forces ,violating Syria territorian integrity .  SO is all about who control the airspace of Syria and the economic cost of maintaining such territory. Syria can make it very economically expensive  For Turkey to operate a new illegal country in northern Syria and bomb any oil stealing. So eventually Turkey will have to leave ,since will not have a way to remove Syrian airforce or Russia to fly over all of Syrian airspace.
BKP

This is entirely accurate. It's just astonishing how it works:

You’re al Qaeda. You’re being supported by the United States in your jihad to impose extremist rule on Syria, but you still have a PR problem; too many people remember all that unpleasant business from so long ago when you blew up a few buildings in the US. What can you do?

Well, first you change the name of your Syrian branch two or three times. You make sure your spokesmen — who actually get respectfully quoted in the US media! — say moderate things in English but speak with genocidal sectarian fury in Arabic. So far, so good. But what if your new US media buddies actually got a peek at how you operate on the ground in Syria — cutting off heads, hoarding food aid, colluding with ISIS, slaughtering religious minorities, oppressing women, etc.? That’s easy: as Patrick Cockburn noted this week, you simply make the zones you control so dangerous for reporters – killing them, kidnapping them, etc. — that they don’t go there anymore. Instead they “report” on your activities from far away, relying on you to provide their information, telling the story you want told.

And presto chango, that’s how those who murdered Americans have become America’s newest heroes, the brave defenders of freedom in Syria. What’s more, anyone who dares point out the true nature of your organization, and how you operate, are now denounced as apologists for the loathsome Assad regime, or as Putin-lovers, even as traitors! Think of it; just a few years ago, you were the most reviled and hated group Americans had ever known — and now Americans across the media and political spectrum hail you as heroes and defend you from all attacks!

Sure, you’ve lost your foothold in Aleppo, where for years you systematically persecuted people and forcibly prevented them from leaving. But America’s still got your back, AQ! Even when you attack relief convoys in an attempt to scuttle a peace deal that would allow anyone who wants to leave East Aleppo to go free, the American media will fudge the headlines so no one will know that it was you who did the deed.*

[And hey, let’s not forget what America’s been doing for you in Yemen! Remember how the Houthis had you on the ropes, nearly ridding the country of your presence — and then the Americans stepped in with their Saudi allies, bombing the holy hell out of the place, choking off food and medicine supplies, destroying the infrastructure for basic survival, killing thousands of civilians and putting millions of people at dire risk of starvation! And suddenly you were back, making great gains, stronger than ever! You simply couldn’t ask for a better friend, could you?]

So buck up, AQ! With the full weight of the American media and political establishment behind you, no doubt there are still great days ahead! In fact, the president has just made it easier for you guys to get even more American weapons so you can carry on your noble quest! It’s just our way of saying Merry Christmas!


* Even Amy Goodman on "Democracy Now" did this. DN is considered super liberal and "grassroots". Goodman deliberately didn't name the perpetrators of the bus attack to give the false impression that it could have been done by anybody. BKP
KoTeMoRe

There's no boat that has the capacity to drop a battalion on the field that has passed through the Bosphorus for the whole week.

Are you sure about that? All we could see from the photos was the upper deck covered in previous generation Russian trucks. We have no idea what she carried on the lower deck.

Joint Statement by the Islamic Republic of Iran, the Russian Federation and the Republic of Turkey

Joint Statement by the Foreign Ministers of the Islamic Republic of Iran, the Russian Federation and the Republic of Turkey on agreed steps to revitalize the political process to end the Syrian conflict, Moscow, 20 December 2016

The Ministers of Foreign Affairs of the Islamic Republic of Iran, the Russian Federation and the Republic of Turkey, meeting in Moscow on 20 December 2016, agreed on the following.

2) Iran, Russia and Turkey are convinced that there is no military solution to the Syrian conflict. They recognize the essential role of the United Nations in the efforts to resolve this crisis in accordance with UNSC resolution 2254. The Ministers also take note of the decisions of the International Syria Support Croup (ISSG). They urge all members of the international community to cooperate in good faith in order to remove the obstacles on the way to implement the agreements contained in these documents.

3) Iran, Russia and Turkey welcome joint efforts in Eastern Aleppo allowing for voluntary evacuation of civilians and organized departure of armed opposition. The Ministers also welcome partial evacuation of civilians from Fuaa, Kafraia, Zabadani and Madaya. They commit to ensure the completion of the process without interruption and in a safe and secure manner. The Ministers express their gratitude to the representatives of ICRC and WHO for their assistance in conduction of the evacuation.

4) The Ministers agree on the importance of expanding ceasefire, unhindered humanitarian assistance and free movement of civilians throughout the country.

5) Iran, Russia and Turkey express their readiness to facilitate and become the guarantors of the prospective agreement, being negotiated, between the Syrian Government and the opposition. They invited all other countries with the influence on the situation on the ground to do the same.

6) They strongly believe that this Agreement will be instrumental to create the necessary momentum for the resumption of the political process in Syria in accordance with the UNSC resolution 2254.

7) The Ministers take note of the kind offer of the President of Kazakhstan to host relevant meetings in Astana.

8) Iran, Russia and Turkey reiterate their determination to fight jointly against ISIL/DAESH and Al-Nusra and to separate from them armed opposition groups.
calm

Bana al-Abed (@AlabedBana) and her family with President @RT_Erdogan at Presidential Complex.
https://twitter.com/farukonalan/status/811528354855788544
Touching (not staged) moment between the Syrian Anne Frank and the Turkish Hitler who helped destroy #Aleppo.

On the other side, terrorists forcing their children to commit suicides...

JFS jihadist teaches his daughters how to blow themselves in sake of god, the same baby who blew herself days ago in #Damascus
https://twitter.com/Syria_Protector/status/811386853500784640

I know where the T90 rumor comes from now.

Russians have been bringing a lot of hardware during november, hardware that was reconditioned in Latakia and Tartus and Damascus. Among these these a lot of storage K-1 era, About battalion worth of T-72AV's, T72B's and T-72B/89. Some of these have already been deployed in Aleppo and around Damascus. One T-72B/89 even took two Tows in the face and survived (partially).

This could or could not be the now "famous" 5th Corp, but this is also based on "blended" hardware, BRDM's, BMP's, BTR's used by Russians in anger.

Basically a lot of Arab Telephone for something that was already in Syria.
calm 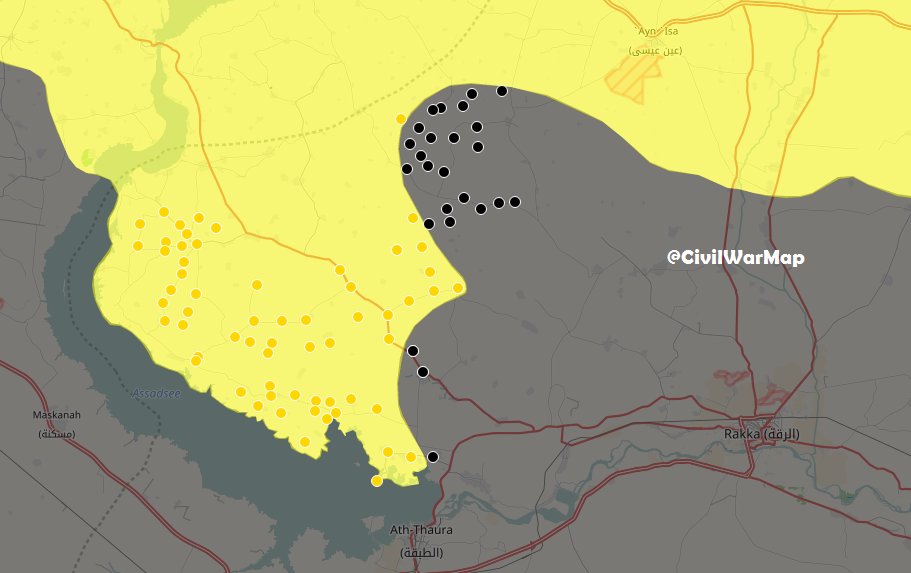 BUSTED! The US Sent ISIS $1.5 Billion in Weapons from Europe, Ukraine

A rare piece given RI lackluster reporting, it appears Bulgarian journalists stumbled upon evidence of support for ISIS from US to Ukraine
KoTeMoRe

Not exactly ISIS, but terrorists nonetheless.

Also the ammounts are a bit higher.

Thing is this has all be known for a long time.

It won't matter because they will not stop arming them they will call it "Baseless lies".

Yadda Yadda we know how the game works.
miketheterrible

Yes. Pretty scary how when evidence racks up against the US Authorities, they can just call it a "lie" and continue on as normal and no one says or does a thing about it. No form of accountability or punishment because everyone west of Russia is on some kind of payroll from Washington.
calm 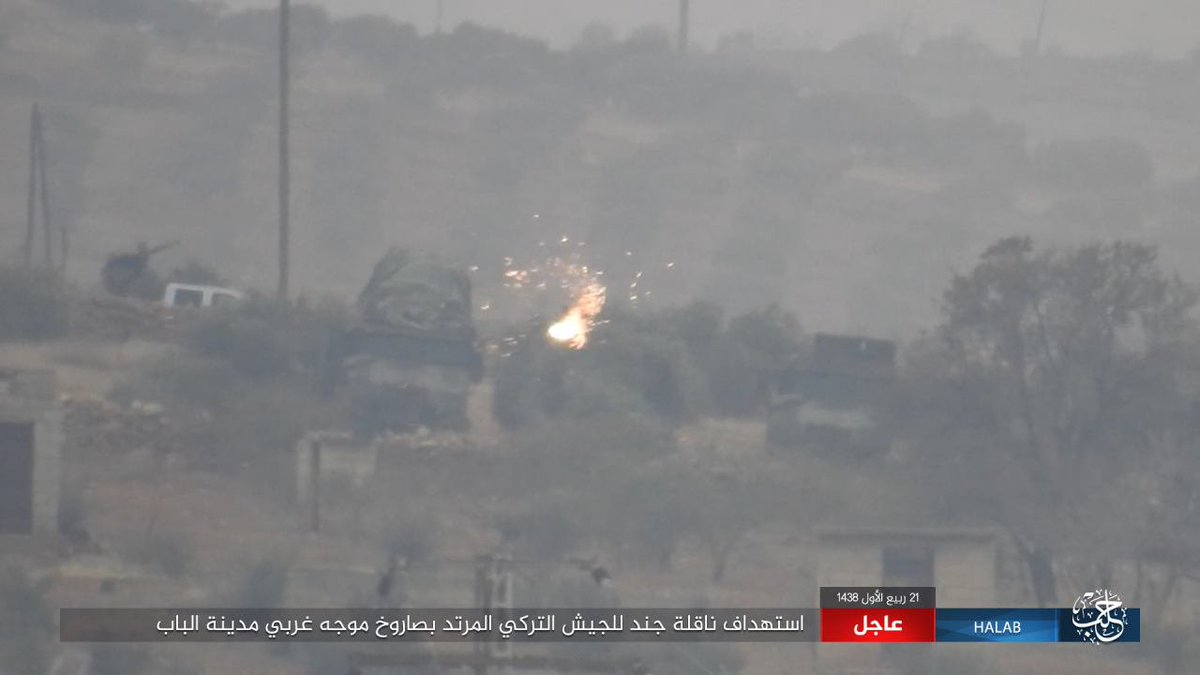 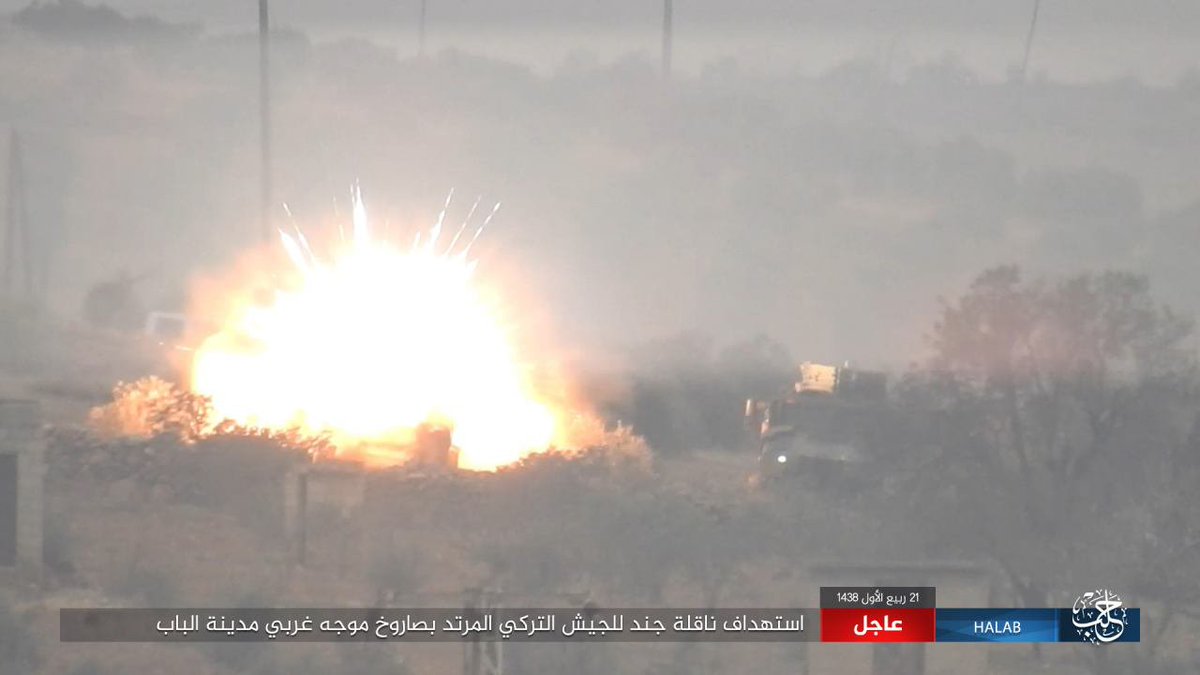 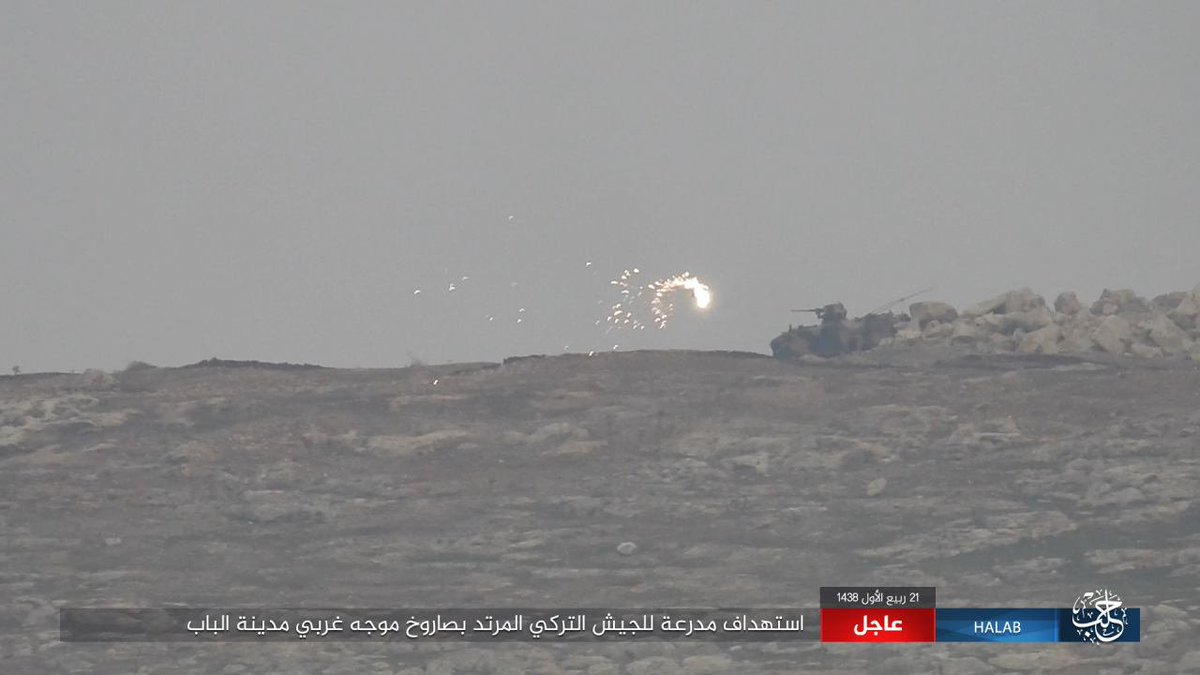 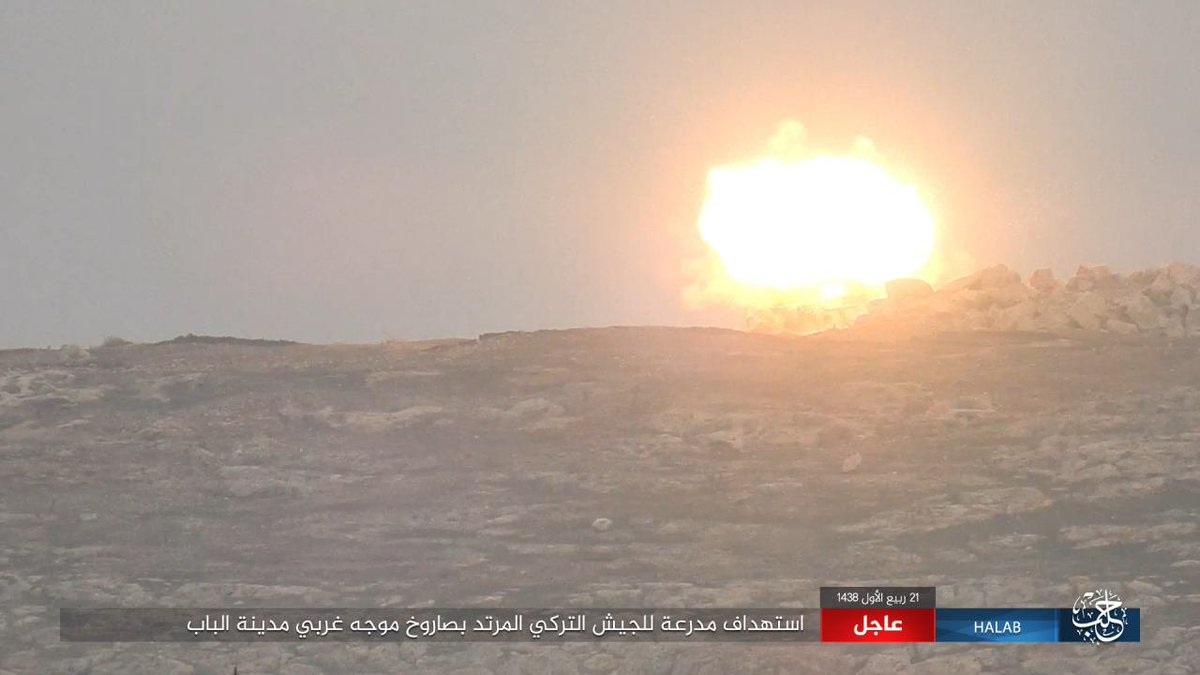 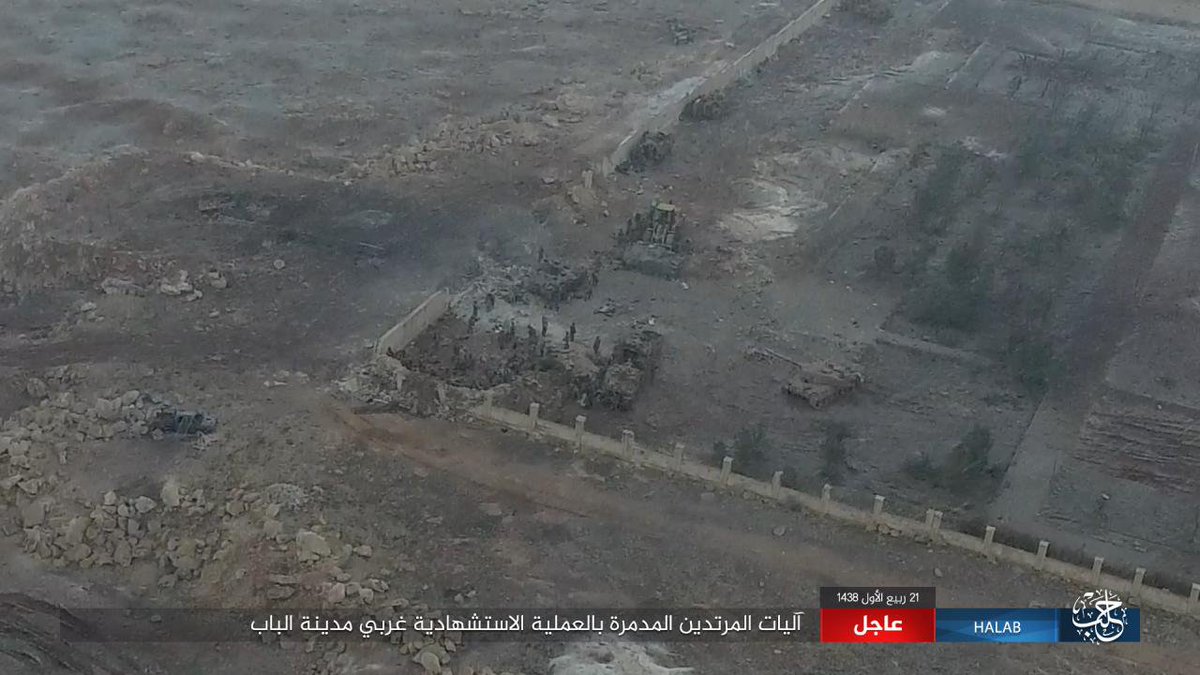 This really give an idea of how much effort the neocons put in this fight. They really lost while going full force.
Hannibal Barca

Turkish army is a joke. Even Saudis look competent compare to them.
KomissarBojanchev

Why doesnt Russia give the SAA thermobaric kornet and metis warheads? Its much cheaper, they have better range than tanks, are more useful in urban combat, and most importantly, since the syrians are incapable of using tanks as more than pillboxes, prevent additional tank losses and make TOW shipments less useful.
PapaDragon

Turkish army is a joke. Even Saudis look competent compare to them.

I would not go that far. Turkish Military might not be sharpest tool in the box but comparing them to Saudis is insulting for anyone who lives north of Cyprus...

It doesn't have active protection.  No fancy composite armour can compensate for this without making the tank too heavy to move.
I don't understand what crack they were smoking when they chose such a development route.    This should also be a reminder
to NATO that the tanks it is deploying on Russian borders, including the vanilla Abrams, are not going to get far.
zorobabel

The total number of Turkish soldiers killed in today's failed assault on Al-Bab has risen to 14 according to Turkish MoD. 30+ wounded. What is the name of that "journalist" ? CUNTzmann ?

Seems IS got itself a Leopard

Al-Bab: ISIS publishes a picture of killed fighters (they claim it's TSK SOF) and a captured German Leopard 2A4 MBT.