Tried to be optimist for a change. Failed so hard

Any one here familiar with a beaten zone?

franco wrote:Any one here familiar with a beaten zone?

Yes, but that is not one...this is more likely probing and advancing.

A beaten zone would require multiple arcs of fire... with such frontal fire.
Neutrality

The SAA have taken the Jabal Badro district. Aleppo-pocket split is basically inevitable at this point.

That moment when statistics aren't only about sales...

WASHINGTON (Sputnik) — On Saturday, Turkey's Anadolu agency reported about a series of explosions at a military training base of Kurdish militia located near the Tal Tamir town in northeastern Syrian Hasakah province. US and UK military instructors were reported to be stationed there.

"We are aware of the report and can confirm no US service-members have been killed in Syria," the spokesperson told RIA Novosti. The area has been cordoned. The reasons of the incident, have not been established yet.

If confirmed, this would place the Syrian army about a kilometer apart. The noose is being tightened... 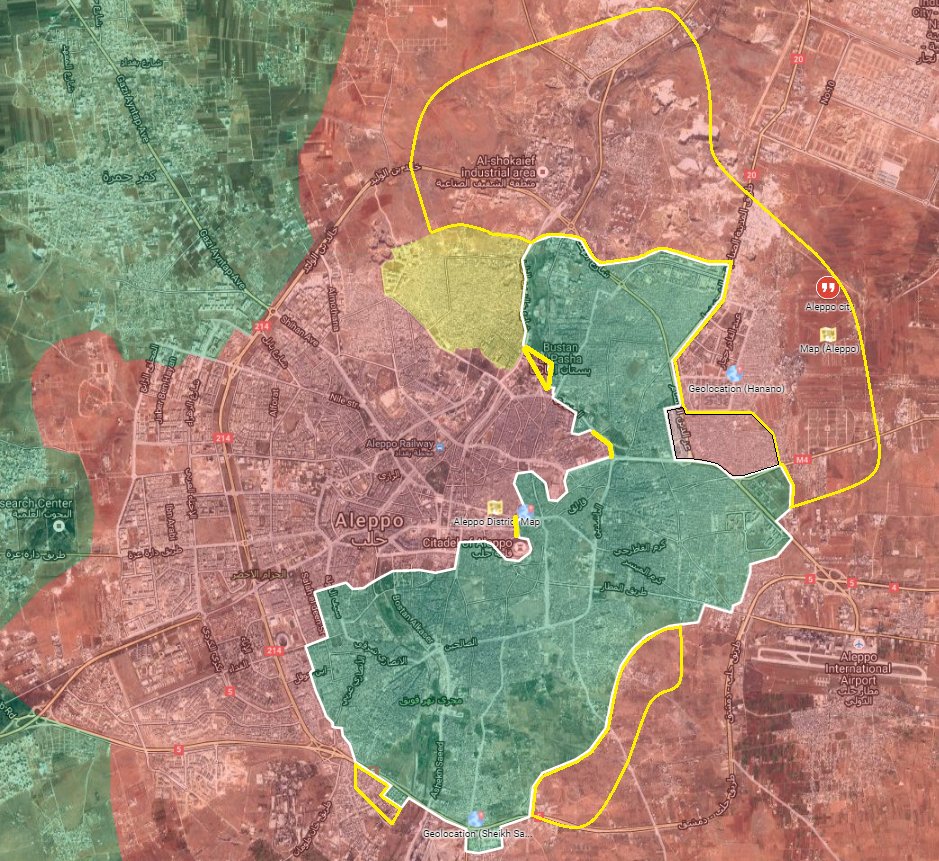 This map below puts the neck tighter from the west, rather than east. 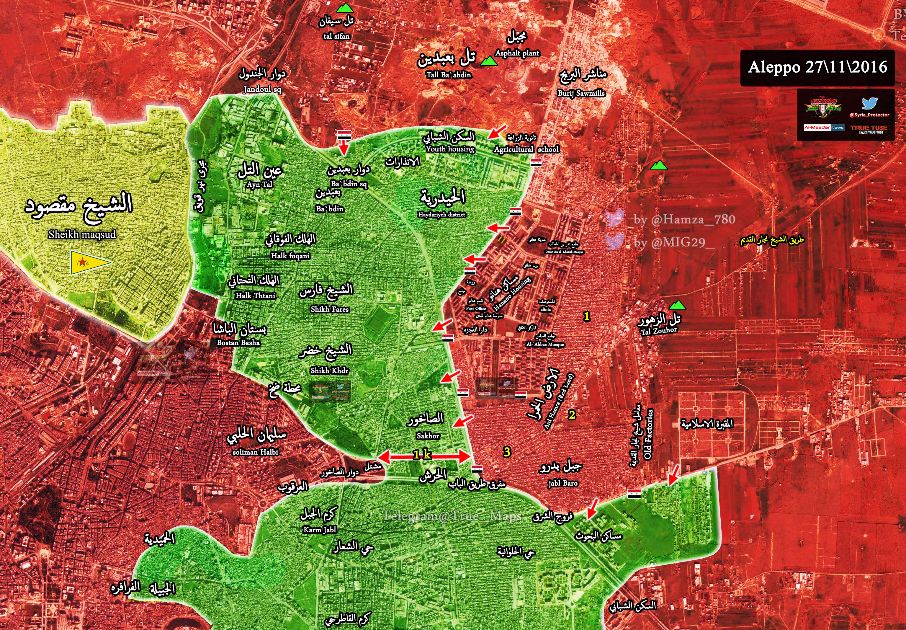 Reports that Sakhur park was taken and highway is under fire control. Aleppo is cut un two as of now.
calm

KiloGolf wrote:This map below puts the neck tighter from the west, rather than east.

calm wrote:Bad day to be a "rebel" 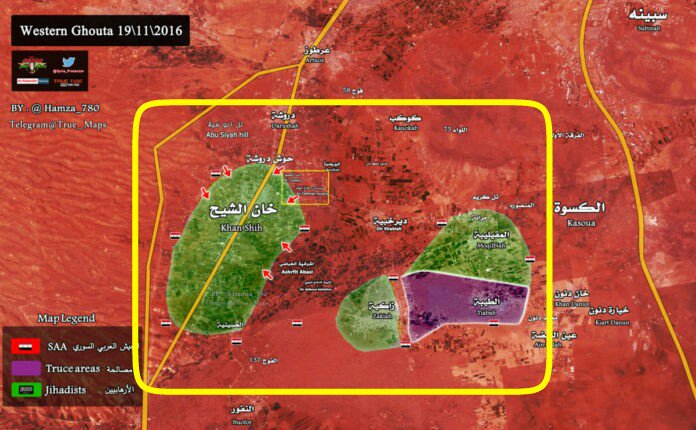 KoTeMoRe wrote:Reports that Sakhur park was taken and highway is under fire control. Aleppo is cut un two as of now. 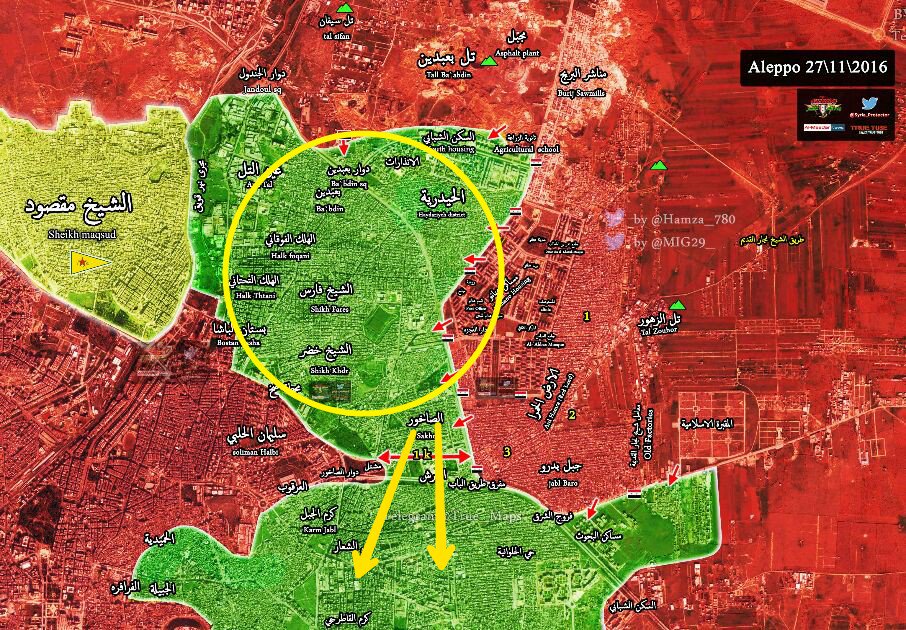 Holy shit this is huge. That is the biggest advance/capture of the SAA yet. 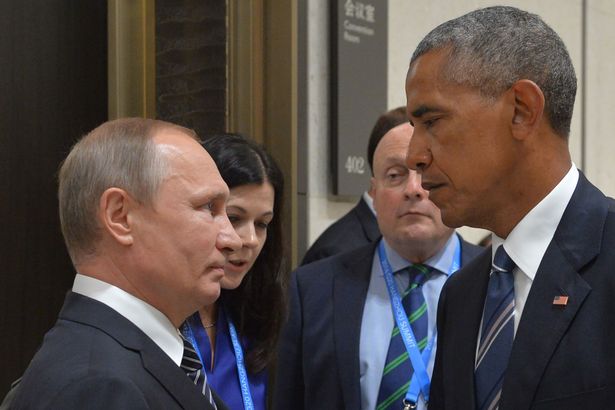 Neutrality wrote:Holy shit this is huge. That is the biggest advance/capture of the SAA yet.

All that delicious salt 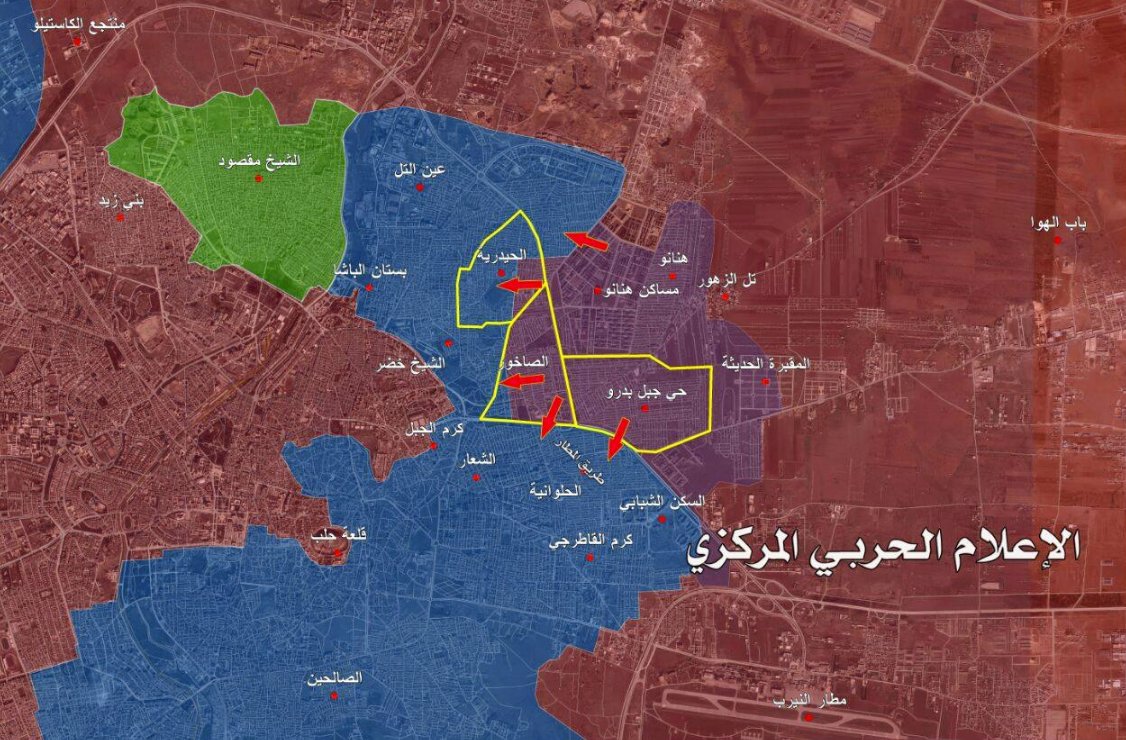 The 'Nimr' Tiger ‏@Souria4Syrians  31m31 minutes ago
Historical Photo from Jabal Badro. Hundreds of civilians finding their way to Safe points set up by the Syrian Army in Aleppo 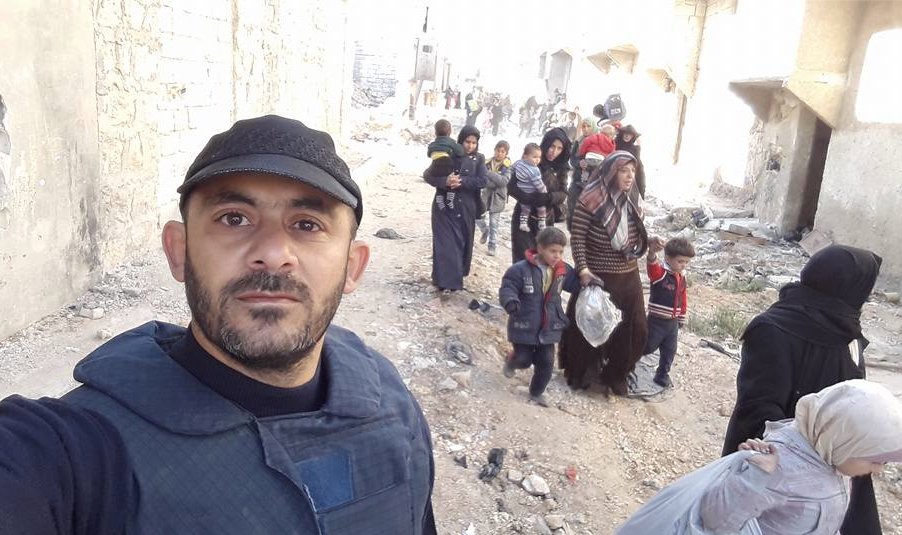 as well as capturing Ard Al-Hamra and Jabal Badro, districts, the SAA managed to capture Jandoul Factories, Ayn Al-Tal district, half of Ba'ibdeen district, and large parts of the Hallak Fuqani and Hallak Tahtani districts

early reports suggest that Sakhour has fallen to the grasps of the government forces. However, an exclusive military source informed Al-Masdar that the district has not been fully captured as of this moment.

over 2000 civilians have reached government-held districts of Aleppo in the past 48 hours. 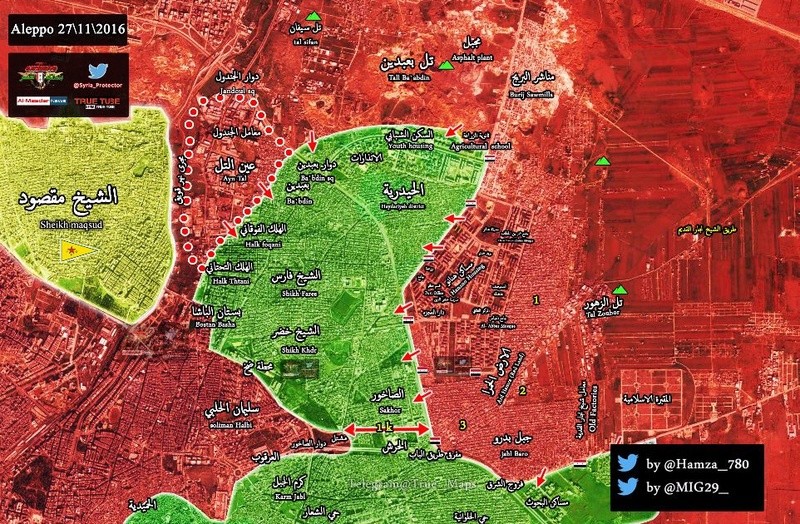 seyavosh ‏@poilkmszawv963  33s33 seconds ago
'Every 17 hours right now in #Aleppo, there is a targeting of #Healthcare facility. #StandWithAleppo 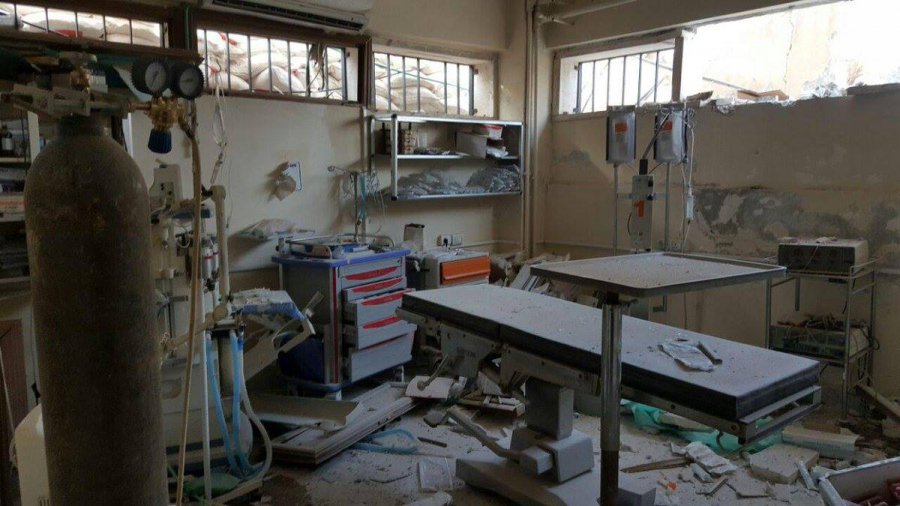 This image is quite fitting:

For those who don't kow who he was, it's the huge guy who was receiving medals from Russia's generals for his actions in Aleppo. Probable KIA spot, Hanano.
calm

That's the agreement for W Ghouta. here are reports that SAA is going to attack remaining pockets and the northern part of Golan.
Like this.

There is truce in Kanaker. But they are going to attack it to force them("rebels") to evacuate to Idlib. Just like Al Tal.
While Syrian Army clash with rebels in Wadi Musa, locals in al-Tell demonstrate calling for peace & respecting truce, Damascus 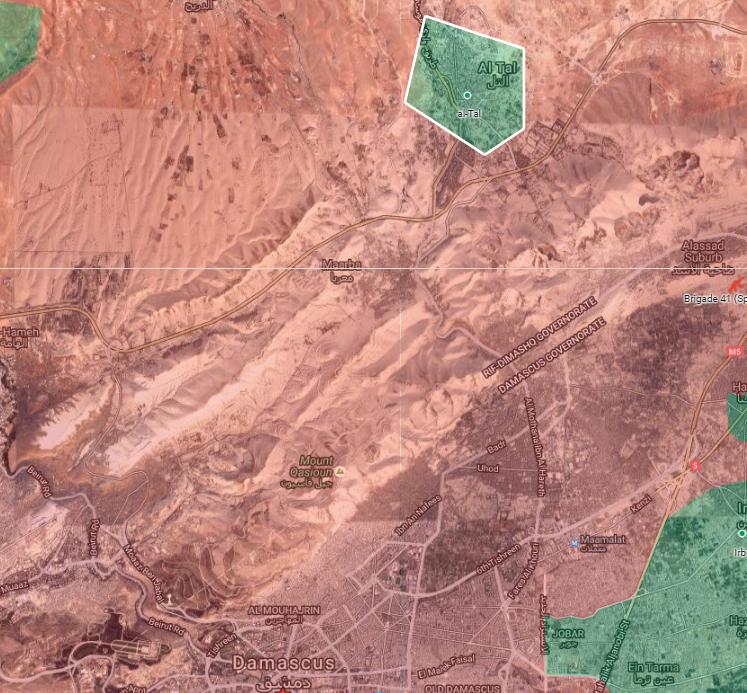 KoTeMoRe wrote:Liwa al Quds operational commander, Muhammad Rafiah has been killed in action.
For those who don't kow who he was, it's the huge guy who was receiving medals from Russia's generals for his actions in Aleppo. Probable KIA spot, Hanano.