That is an older modernization right Armenian?
Specs?
TR1


Nice video of BTR-82A firing. For sure new FCS in BTR-82A turret with integrated day/night sight, stabilization and ballistic computer is far more effective than anything BTRs, BMDs and BMPs have before if we don't count here Berezhok and Bahcha-U turrets.

If they install this FCS in BMD-2 turret, maybe with lower placing of main gun and tracked vehicle they could get better accuracy than in wheeled BTR.
TR1

According to this, from 1990-1997, 137 BMD-3s were manufactured. This is a lot more than I thought, and given the much smaller size of the VDV today, one would they think would be more prevalent. However, I have seen barely any photos of multiple BMD-3s in service.

Vladimir, did you see BMD-3s during your service time?
Admin

Were units "mixed and matched" with BMD-1/2/3s, or were there fully BMD-3 equipped formations?

Were units "mixed and matched" with BMD-1/2/3s, or were there fully BMD-3 equipped formations?

Only units of BMD-3s were at Pskov. They were grouped together.
steve501

Haven't got any good angles... these are the best ones I have for the BMD-2: 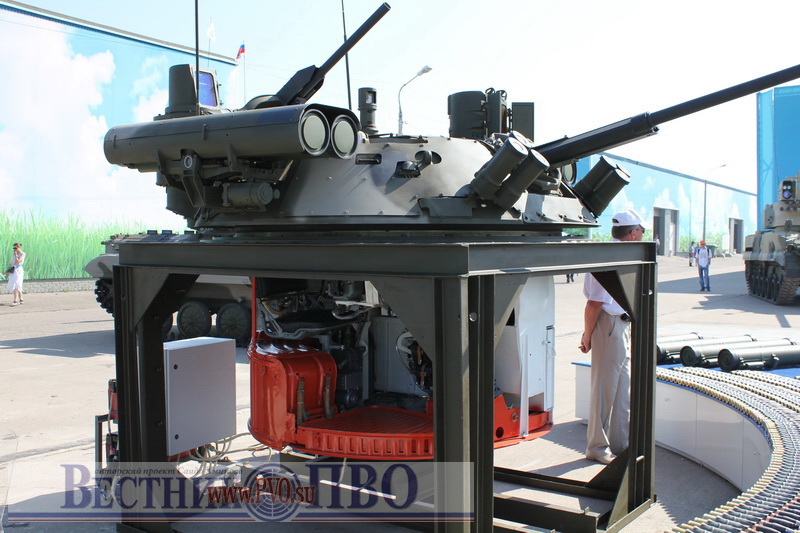 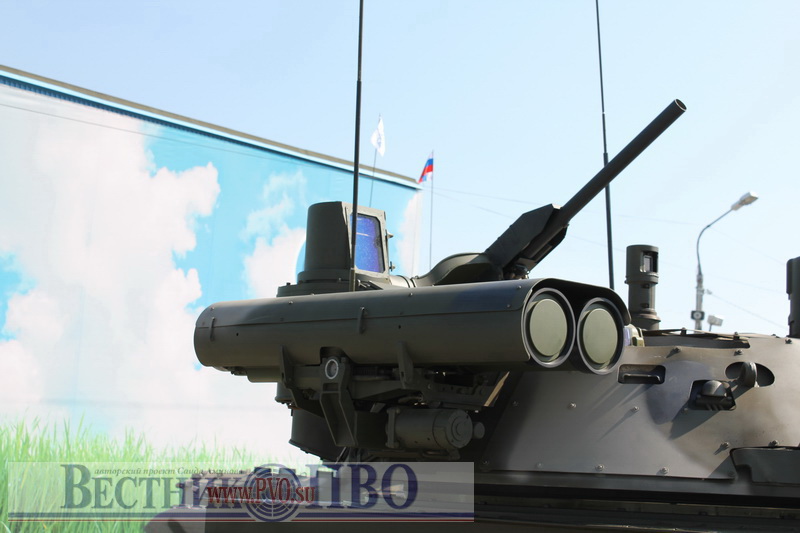 Of course it seems to be the same as the Berezhok upgrade for the BMP-2 so you might be better off looking for photos of that perhaps to get an idea of what it looks like from above.

Here is a vid showing the BMP-2 Berezhok, but I suspect the AG-30 arrangement is the same for BMD-2.

Note at about 3 minutes it shows the 30mm grenade launcher.

Note also that this is an old video because it gives the AGS-30s range as 1.7km.

With new more effective ammo it can reach 2.2km with a more efficient HE payload.

I would also add that replacing the old Kornets with Kornet-EMs would almost double the reach of the vehicle and allow limited ability to engage helos out to 10kms.

Thanks Gary, do you think many of the BMD 2 will have the added AGS fitted to the turret
GarryB

I have heard that they are planning not to buy new vehicles and that the focus will be upgrading existing vehicles.

That means BMP-2 and BMD-2 upgrades will be priorities.

I have heard however that the boss of the VDV likes the BMD-4M and wants those instead, and the big question is whether he will get his way.

It is my understanding that the first order for An-70s is for about 60 aircraft... if the VDV get a significant number of these aircraft then I rather suspect they will use some for transports and some for para dropping.

The huge advantage the VDV has over most western forces is armour and mobility. They can be dropped 100km away from their target in the middle of nowhere but then drive to their objective and attack it.

Air dropping a force that then attacks an airstrip means instead of dropping the entire force you can air land most of it at the captured air base. The rough field capabilities of the An-70 means that they could simply set up their own air base somewhere where there is a stretch of flat hard ground.

Landing vehicles is much simpler and quicker and safer than parachuting them... and more importantly the parachuted vehicles have weight restrictions, while the landed vehicles are limited only by the payload capacity of the aircraft that brings them... about 50 tons for An-70 and 60 tons for the IL-476... 150 tons for the upgraded An-124s.

The 30mm grenade launcher on the other hand is a low velocity round that could easily be lobbed over a tank or other cover.

In the book "Rapid Fire" by Tony Williams there is a comment about a BMP-3 commander hesitating in combat trying to decide what weapon to engage the enemy with, but the reality is that a soldier in combat has a wide choice of methods of killing too.
You might have a rifle, a pistol, a knife, an entrenching tool, your bare hands and feet. The situation dictates which is the most effective... an individual enemy at 200m you use a rifle. A small armoured vehicle you use that disposable RPG-22 launcher on your shoulder... an enemy soldier steps out a door half a metre away...your bare hands would be quickest etc etc.

The point is that having more weapons gives you more options when each weapon has a different characteristic and pluses and minuses.

Sorry for the rant...

Thanks Gary, would any have been fitted during the 2nd Chechen war to BMD 2
cheers
Steve
GarryB

Well the second Chechen conflict is described as ending in 2009, so AFAIK it is possible they might have used some, but purely for testing purposes.
TR1

Photos of how a BMD-1 is modernized into a BMD-2, along with the weird MOD order for 135 units.
These photos are also from the 103rd.

Some more details about the BMD modernization:
The turrets are all new (making an old design, weird)
Vehicle weighs about 8 tons after modernization.
GarryB

Some more details about the BMD modernization:
The turrets are all new (making an old design, weird)
Vehicle weighs about 8 tons after modernization.

BMD-1 and BMD-2 are basically the same vehicle... it is in fact very much like the T-90SM upgrade being applied to a late model T-72... ie all new turret and new ERA on hull plus new engine and transmission.
TR1

All new turret is good, but the issue is this is pretty much the old BMD-2 turret, just new modernization.
Mr.Kalishnikov47

So basically, for the price they're paying to modernize these old BMD-1s, they could have instead purchased an additional 38 BMD-4Ms.
Cyberspec

The BMD-4M is probably not ready for mass production. The first 10 units are likely a pre-series test run. It will take a few years before it starts entering service in larger numbers, so upgrading the BMD-1/2 now makes some sense
Mr.Kalishnikov47

Cyberspec wrote:The BMD-4M is probably not ready for mass production. The first 10 units are likely a pre-series test run. It will take a few years before it starts entering service in larger numbers, so upgrading the BMD-1/2 now makes some sense

I just fail to see any logic behind this decision.
GarryB

I just fail to see any logic behind this decision.

Very simply the BMD-1 vehicles being upgraded will be the vehicles currently being used.

A more useful priority is to get their new C4IR system into service and operational and to equip the forces with night vision equipment and other new kit that will allow them to be a 24/7 force.

They will be the first force in, so they need good stuff now.

There might be new stuff on the way but in the mean time they need to be able to do their job.

Right now having 145 upgraded vehicles is rather more use to the VDV than having 38 new vehicles... especially when they are also getting 10 new vehicles anyway.

Value for money is important too... no point in throwing money away.
a89

Can someone clarify the word "capremont"?
flamming_python

Can someone clarify the word "capremont"?

Can someone clarify the word "capremont"?

Many BMD-2s are flogged close to death, so presumably some BMD-1s actually have more service life left; to the point that modernizing them is cheaper.
It is simply a matter of turret difference anyways, and the turrets are newly-built in any case, so taking BMD-2 hulls would not change much I think.
They are standardized and repaired to service until the new replacement, whatever it will be, comes along.
GarryB

When they say to BMD-2 level I don't think they will be exactly the same as the BMD-2 that entered service quite some time ago with now largely obsolete internal electronics.

They will most likely fit new communications and electronics systems and sights.

In concept think of it as they are taking BMP-1s and fitting them with BMP-2 upgraded turrets, so they are not fitting BMP-3 turrets. That is not to say they wont have modern sights and communications equipment, they just will lack the 100mm rifled main gun and the new BMD-4 chassis etc.

@FP I see what you mean... the biggest mistake the US made with the Humvee is that they forgot its purpose and started deploying the Humvee like it was a light armoured car, which despite its weight it certainly wasn't.

Some models of the Tigr are not actually heavier than the Lynx and have a better internal layout and larger load capacity... apart from the supposed better protection from IEDs and Mines... which the Italians wouldn't let the Russians test BTW and is therefore unproven, there is not actually that much that the Lynx offers apart from the fact that it is an in service mature design with most of the kinks removed.
This is negated by the fact that it has to be Russianised both to use Russian components and to adapt to Russian operations/maintainence so in many ways it is no better off than the Tigr... except it is more expensive and foreign.
Sponsored content