marcellogo wrote:
One of the best reasons for my predilection for such a formula is surely in my previous posts about engines:while the Americans, constrained by the fuselage dimensions had to modify heavily the engines of their own legacy planes in order to increase their thrust, ending up with just a modest increase of the final T/W ratio but completely screwing their own bypass ratio, the pod configuration allowed instead russian to increase the fan diameter of the Al-41-117S in order not just to retain but even to increase the Bypass ratio together with the T/W one compared to the original engine.
Same will happen with the Al-51 on Su-57: they would have a way better engine that would actually be even more compact than the actual one

Apart from leaving a very usable space for the bays, it surely has advantages in survivability and accessibility to the engines, in that regard I like a lot this picture of the Su-57: 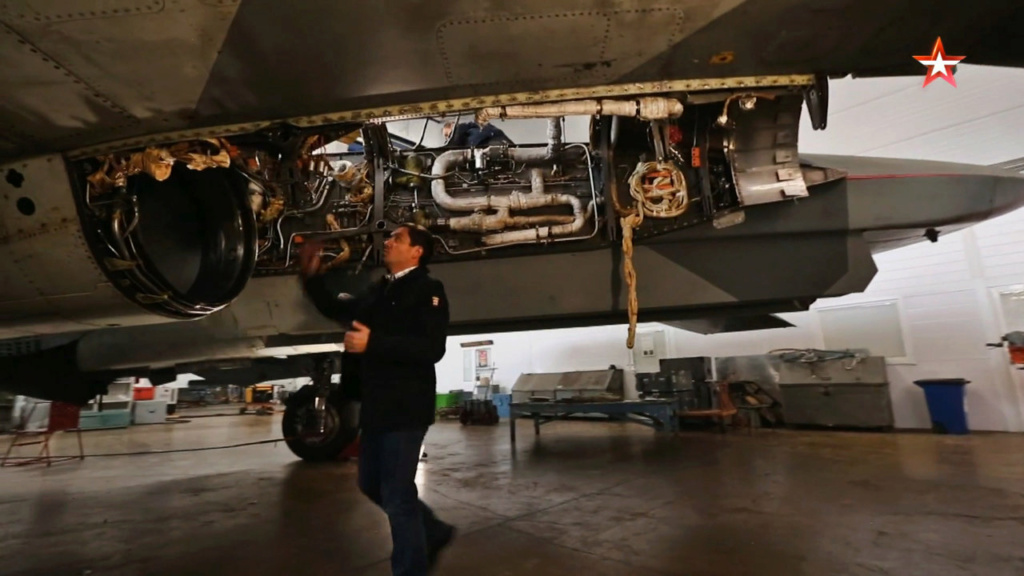 You can see the completely unimpeded access to the engines and ancillaries, as well as the way engine is minimally surrounded by other systems that could be damaged in case of an engine failure.

As to the increase of BPR, are you sure the izd. 117 has a bigger total diameter than AL-31F? I know the compressor is a bit bigger, but I thought the engine overall kept the same external dimensions.
Podlodka77

The black wing of the Berkut: how the Su-47 fighter was created

TASS - about the first domestic fighter made of composite materials 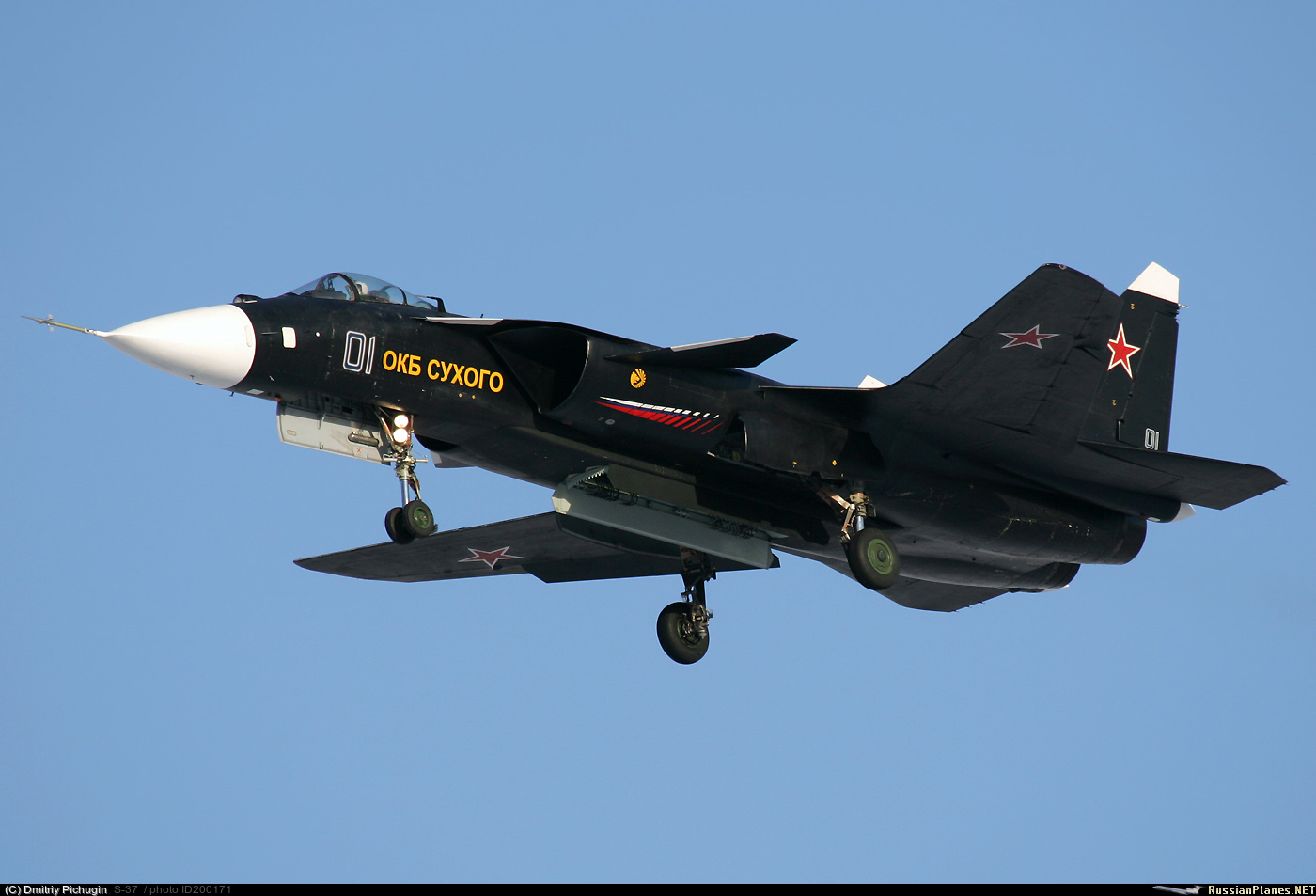 25 years ago, the first flight of the S-37 "Berkut" (Su-47) took place - the star of the aviation world and the predecessor of the Su-57. Igor Votintsev, test pilot of the Sukhoi Design Bureau, lifted the car into the air in September 1997. This experimental fighter showed that modern materials make it possible to create designs that previously seemed like science fiction. Read more about the birth of the first domestic wing made of composite materials in the TASS material.

The Su-47 "Berkut" was first shown to the general public at the MAKS-1999 air show, where it made a demonstration flight. The car stood out sharply from the rest thanks to the swept back wing and black color. In the media, he was instantly dubbed a fighter of the XXI century and reported that the car should soon go into mass production. In fact, the Berkut was an experimental aircraft designed to test layout, technical and technological solutions as part of work on a new generation of fighters. Work on this topic began at the Design Bureau under the conditional code S-22.

Since 1983, the project of an aircraft with a swept wing developed as a modernization of the Su-27 for the USSR Air Force, but it was closed in 1988. Further, the USSR Navy acted as the customer, and the fighter was renamed the Su-27KM (ship-modified), but this project was also stopped after the collapse of the Soviet Union.
But the work did not stop even for a minute. The creation of the "Berkut" is an initiative development of the Sukhoi Design Bureau (part of the UAC) and, in particular, of General Designer Mikhail Simonov. The Sukhovtsy understood perfectly well that it was necessary to create a reserve for a fifth-generation fighter, which would have, among other things, super-maneuverability, the ability to maintain stability and controllability at angles of attack up to 90 degrees for close air combat. The reverse sweep of the wing suited these tasks in the best possible way. Mikhail Pogosyan was appointed chief designer on the topic.

Reverse side of sweep
The swept-back wing has less inductive resistance, because the air flow flows from the tips to its root section. The intensity of the formation of the end vortex is reduced, and therefore the lift-to-drag ratio is increased. As a result, the takeoff and landing characteristics of the aircraft, maneuverability, lift, and flight range at subsonic speeds increase.
In addition, the working conditions of the wing mechanization are improving, the internal volumes of the airframe are increasing, which is especially important for the fifth generation fighter, which must carry weapons in the internal compartments.

But creating such a wing is a difficult task. A feature of the swept back wing is that when certain flight speeds are reached, the wingtips "twist" which can lead to the destruction of the entire structure.
To avoid this, the wing must have very high stiffness characteristics, and it is almost impossible to do this on a supersonic fighter using aircraft-grade aluminum and even steel alloys. The situation changed only in the 1980s, when composite materials began to become widespread in aviation.

Long live the composite!
Composite materials, which allow lightweight and strong structures, are made up of two or more components. For example, reinforced concrete is better than stone in some respects. In aviation technology, carbon fiber is most often used, consisting of carbon fiber filaments connected by a polymer binder. Such material is much lighter than steel, and in some cases stronger than it.
Today, the use of composite materials has become ubiquitous. For example, the wing of the Russian medium-haul liner MS-21 was created from them, the composites make up 25% of the weight of the empty Su-57 fifth-generation fighter. "Berkut" has become the basis for the development of such technologies, its design is made of composites by 13%, which by the standards of the 1990s was a real breakthrough. Most of the composites were used in the aircraft wing, in which their share was about 50%.

Obninsk research and production enterprise Tekhnologiya (also part of Rostec) was instructed to manufacture panels for the reverse swept wing for the Berkut. The panels used a new material developed by VIAM, which was not inferior in its characteristics to the best world samples of carbon fiber at that time. In 1986, the manufacture of wing panels for the first time in the USSR was carried out by the method of automated laying out.

"At that time, we had the only machine in Russia for automated laying out, but its programs provided work only in two planes. We manually set the machine to two more coordinates. It was a simple but painstaking job: as soon as the spring-loaded "head" "sat "on the limit switch, we began to select coordinates so that it would move further as we needed. Unforgettable emotions! I worked for a month without days off," recalls Valery Ternovoy, head of the technical process automation department at ORPE Tekhnologiya.

Later, Technologiya's programmers developed software that made it possible to automate work processes. This was just one of the many problems that inevitably arise when new materials and production methods are introduced. But all of them were solved by the designers of the Sukhoi Design Bureau and the specialists of "Technology".
"It was a difficult time. Factories were closing, in general the situation was difficult. And we received an order for the manufacture of a reverse swept wing for the Su-47. This is a colossal experience that served as a breakthrough not only for aviation, but also for our production. A method was introduced automated laying out of products for aviation equipment, materials were brought to high quality, and it was a great practice for workers," recalls Alexander Konashenkov, operator of machine tools with program control of ONPP Tekhnologiya.

Tests of the country's first carbon fiber wing were carried out at the Sukhoi Design Bureau. All project participants were very worried, at each announcement of the application of a new load, they listened anxiously to the slightest crunch, did not talk. According to them, a special nervous intensity began with the first ringing clicks. This meant that the internal stresses approached the ultimate strength of the composite. It was amazing to see how the wing flexes a lot, but calmly holds the load. The carbon-fiber construction withstood the design test with a margin.
The flight tests of the Su-47 were treated calmly by the specialists of ONPP Tekhnologiya, as they were confident in the reliability of their carbon-fiber panels. But everyone was overwhelmed with a sense of pride for the result achieved in the close collaboration of materials scientists, strength engineers, designers, technologists, testers, workers and foremen of the enterprises of the Sukhoi Design Bureau, TsAGI, VIAM and ONPP "Tekhnologiya".
The test pilots said that the aircraft was large, had powerful engines, but was very easy to fly; even a young graduate of a military aviation school could fly it without complex retraining.

The aircraft managed to introduce a number of new design and technical solutions that were not previously used on aircraft of this class: the implementation of a large degree of longitudinal static instability, the use of large-sized milled double-curvature panels and composite materials in the loaded structural elements of the airframe, etc.


Berkut genes in the fifth generation

The Su-47 project was stopped in favor of the development of the Su-57 fighter, which is now entering the army. But the Su-47 played a huge role in its creation, allowing Russian aircraft manufacturers to test a number of important ideas and gather a lot of information. According to Rostec, thanks to the project, new designs, software and materials have been developed. Based on this alone, the experimental fighter project can be considered unconditionally successful.

In 1999, the Sukhoi Design Bureau achieved the inclusion of the S-37 program in the state defense order, giving it official status, which served to improve funding for testing. As a result, "Berkut" has become an indispensable "flying laboratory". Since 2004, the Su-47 has been the main research platform for fifth-generation aircraft.

According to Rostec, the colossal knowledge about the reverse-swept wing made of composite materials obtained from the Berkut tests is used to create unmanned aerial vehicles and civil aircraft.