The Saudi-led coalition troops failed to deploy troops on the Western coasts of Yemen after they were defeated and pushed back by the army and popular committees.

A Yemeni military source said that the army and popular forces blocked the Saudi-led coalition militants' deployment on the Western coasts, adding that the enemies had attacked with a number of combat boats and frigates, supported by fighters and Apache helicopters.

He said that the Saudi-led forces could not advance and sustained a large number of casualties, noting that the remaining militants fled the battlescene.

Yemen’s Ansarullah movement announced that the United Arab Emirates (UAE) continues with its weeks-long offensive against the port city of Hudaydah, stressing that its recent claim of a halt in the military operation has only been made in an attempt to “deceive public opinion”.

Ansarullah Spokesman Mohammed Abdul-Salam stated that the UAE’s offensive against the Yemeni city had not been stopped, Al-Masirah reported on Sunday

The United Arab Emirates announced Sunday a pause in its military campaign on Hudaydah amid reports that the Saudi-led push has hit a brick wall in the face of stiff resistance from Yemen's Ansarullah.

UAE Minister of State for Foreign Affairs Anwar Gargash said in a post on his Twitter account on Sunday that the halt in the offensive was meant to give a chance to UN efforts aimed at resolving the conflict.

"We welcome continuing efforts by UN Special Envoy, Martin Griffiths, to achieve an unconditional Houthi withdrawal from Hudaydah city and port," he stated, adding that "we have paused our campaign to allow enough time for this option to be fully explored. We hope he will succeed".

Mon Jul 02, 2018
A commander of the infamous US security firm (Academi), formerly known as Blackwater, in Yemen was held captive by the Yemeni army and popular committees.

"The Yemeni army and Ansarullah group could hold captive one of the commanders of the US Blackwater firm who was fighting for the UAE in Yemen," a UAE security officer wrote on his twitter page on Monday.

He added that Ansarullah will soon release footages of the Blackwater commander who was held captive.

Meantime, the Yemeni media wrote on Monday that the country's army has hunted a big fish on the Western coasts, adding that strategic developments will be witnessed in the next few days to the benefit of the Yemeni army.

Another Blackwater commander had also been killed earlier when the Yemeni military backed by fighters of Ansarullah movement launched a Tochka ballistic missile on the al-Anad military base in the Southern Yemeni province of Lahij.

Colonel Nicholas Petros was killed along with a group of mercenaries fighting for the Saudi regime in its war on Yemen.

Lebanon's al-Ahed news website reported at the time that Apache helicopters, Typhoon fighter jets and armories belonging to the mercenaries were destroyed in the missile strike.

*Academi is an American private military company founded in 1997 by former Navy SEAL officer Erik Prince as Blackwater, renamed as Xe Services in 2009 and now known as Academi since 2011 after the company was acquired by a group of private investors.

At this stage of the conflict what's people's predicted outcome? Some people I know thought houthi would be finished by now. But I take my hat off to them there tough and determined
Hannibal Barca

I believe Houthis will make it through and eventually win the war decisively.
They are great fighters and obviously receive a lot of help from Russia through Iran and at least in the past through Qatar as well.
Saudis were probably thinking that by neutralising Qatar and blocking the ports will exhaust them, but Iran has its ways in the peninsula that's why the zionists try desperately everything they can to submerge them.
Visc

Agreed with the above. Modern Yemen has been in countless wars since 1934 to this day so this is nothing new for them. Unless Iran's government is overthrown by the Zionist west, which is unlikely as they have failed many times since 1979, the Ansarullah will make it trough. In the scenario of Ansarullah decisive victory the highest price will be paid by the stooge Kingdom of Saudi Arabia.

"This comes within the framework of developing the missile capabilities and raising their effectiveness in the field," the missile force said in a statement.

"The enemy should realize that all ballistic missile launchers are too far away to be hit by its fighter jets, which do nothing but committing massacres and killing women and children," it added.

Advanced Flipflop firepower. Keeping an M61 supplied with ammo could be a problem.

UAV...... is it possible for the Houthis to develop low flying cruise missiles?
We need pics.
Visc

Clashes Between Houthis And Saudi-UAE Coalition Resume Near Hudaydah, In Other Areas Across Yemen

On July 29th, Houthi and Yemeni army troops killed four Saudi soldiers and have captured two others in counterattacks near the border, as reported by al-Masirah.

These developments happened during the Yemeni army’s attack on the Mash’al military base in the Jizan region in the southwest of Yemen. Furthermore, Yemeni snipers killed eight coalition-backed fighters in Jizan as well as in the west-central Yemeni Province of Ma’rib and the impoverished country’s west coast, al-Masirah reported.

Al-Masirah has also published a video showing army operations against Saudi-backed troops in the Ta’izz Province in the southwest. The operation, as reported by the Yemeni Media, led to the seizure of an Emirati military vehicle, and an unspecified quantity of weapons and ammunition.

This escalation comes as a result of heavy airstrikes carried out by the Saudi-coalition on the city of Hudaydah. According to residents, the airstrikes began in the early hours of July 27th and targeted a police station in the center of the city and a plastics factory in the northern part. The districts of Zubaid and Tahita, located in southern Hudaydah, were also bombarded.

On July 30th, al-Masirah reported that the Saudi-led coalition has killed 4 and injured 5 more civilians, including children after an attack on the al-Hale district in Hudaydah. They also launched four raids on the Agricultural Extension Center in the al-Duraihemi district, two raids on rural hospitals and sixteen other raids on areas in al-Duraihemi.

Al-Masirah reported a civilian was killed and three others injured on Friday after an undetonated cluster bomb went off in Zubaid. Cluster bombs, which have been also used in the past by the Saudi-coalition are banned under the Convention on Cluster Munitions (CCM).

The Saudi-coalition’s offense to capture Hudaydah began on June 13th, with operation Golden Victory. However, the Saudi-led coalition has had no success against the Houthi resistance.

On July 25th, the Saudi government announced the closing of the Bab el-Mandeb for oil shipments after the Houthis reportedly attacked two crude oil carriers. The Houthi, however, reported through al-Masirah that they attacked two military vessels. The Houthi have also threatened to block Bab el-Mandeb, claiming on July 26th that they possessed the naval capability to hit Saudi ports and other Red Sea Targets.

UN Special Envoy Martin Griffiths who is tasked with mediating the peace negotiations between the Houthis and the Saudi-led coalition has found no success in his continuing attempts to establish a dialogue between the sides.

The Houthi refuse to surrender the city of Hudaydah to the Saudi-led coalition and would only allow a supervision by the UN, while they remain present in the city.

On July 29th, the international non-government organization Save the Children warned that Saudi attacks could create conditions for a catastrophic new outbreak of cholera, which could affect thousands of people in Hudaydah. Helle Thorning-Schmidt, the body’s CEO reportedly claimed that the bombings could turn Hudaydah into “ground zero” for an outbreak.

Yemen, and Hudaydah are in a increasingly worsening humanitarian crisis, caused by the maritime and aerial blockade imposed by the Saudi-led coalition.

^
Mostly true except that Israel + US and other western countries know very well what is going on because they are actively participating in this war against Yemeni army/Ansarallah (aka the Houthis), albeit not officially. Bab-el-Mandeb or the Red Sea strait is the critical point Israel/US worry about. They will do anything to keep it open and prevent Ansarallah and Iran from controlling this pass. If Ansarallah could keep this strait under control (militarily closed for Israel/US/Arab gang) along with Iran having control over Strait of Hormuz, it would mean a lot of trouble for Israeli/Saudi/US/western alliance, not just in military but in economic (oil and gas) sense as well.

Not sure how they id'd the munition but if true the US won't want this spread far and wide.

#BREAKING NEWS
????????of #US bomb used by #Saudi #UAE strike on school bus
51killed inc 40children
Pentagon said 9th August:
doesn’t know if US-made bombs killed kids in Yemen
“We may never know if the munition [used] was one that the US sold to them,”
Now we know its #USA made MK82
JohninMK

Looks like it had a Paveway guidance front end, so guided onto the school bus intentionally. Mind you the US UN rep claims that it was being used as a 'human shield' WTF looks like US morality really down the tubes now.

#Yemen schoolbus was hit by the same bomb type that hit a wedding in April. 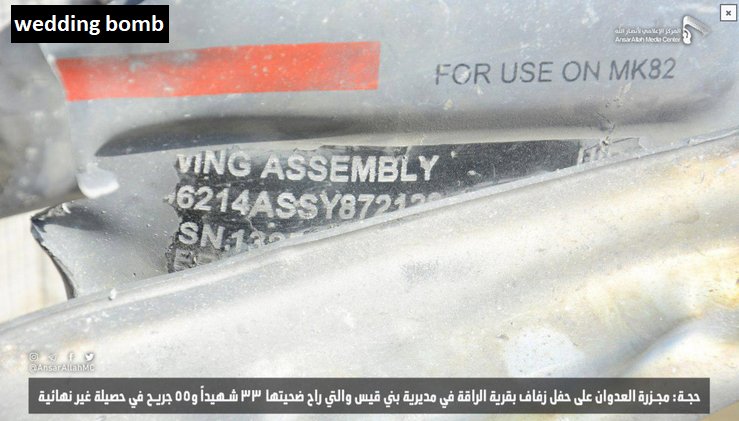 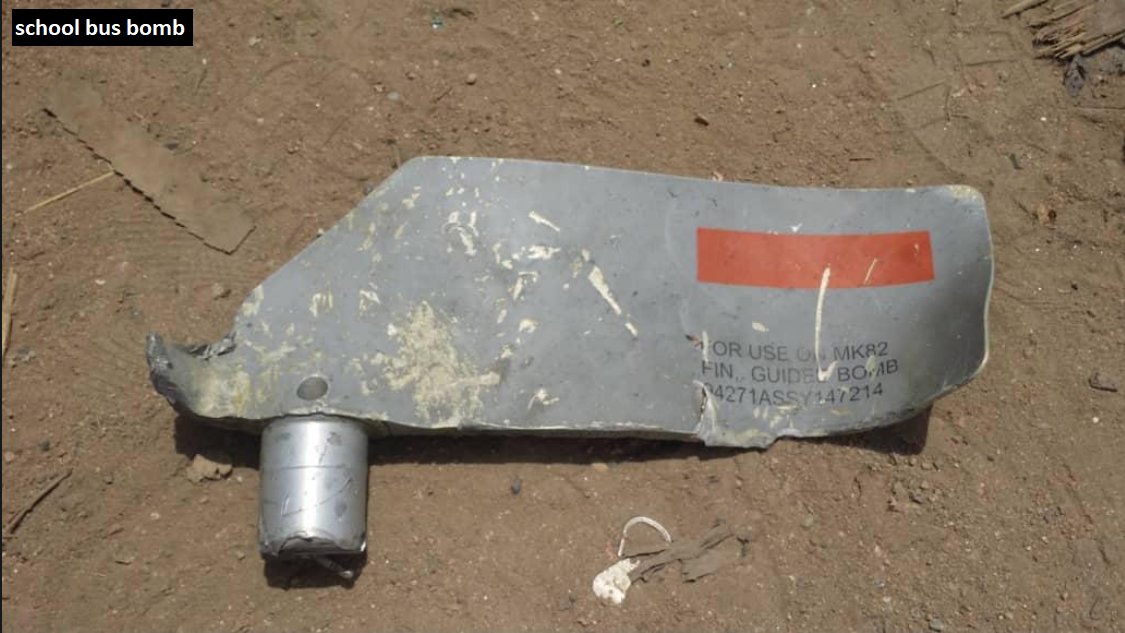 can we have a map with the territories of opposing forces?

Ambush husit ... nobody got out

In the first episode, as a result of a pickup in a mined area, at 0:15 it can be seen that the driver is lying on the steering wheel, the car caught fire and completely burnt out. The second episode was also accompanied by an explosion, a defeat palpable. In the end it is clear that there is no movement in the cabin.

Saudi authorities: total of 197 missiles/rockets fired at Saudi Arabia since beginning of the campaign resulted in 112 fatalities

Another M1 destroyed. The hit doesn't look like they destroyed it but the crew escaped. Maybe they touched a vital part but not the ammunition.

Another M1 destroyed. The hit doesn't look like they destroyed it but the crew escaped. Maybe they touched a vital part but not the ammunition.

Anyway as a result tan is lost

Any tank without infantry support is vulnerable, and if the crew run away due to any sort of damage, then even a cigarette lighter and a piece of paper or wood can destroy the entire vehicle...
Isos

WTF ? This guerilla has weapons more precise than US and Russia ...