OK folks, we now know that there are 10 A-10s at Incirlik, replacing the 6 F-16s (probably the ones that hit Aleppo power station). The A-10, with the Su-25, are optimised for the CAS role, especially anti-armour with its gun and Hellfires.

We can assume that the Su-25s are, as well as being directed at known pre-determined targets, probably being Forward Air Controlled by either embedded Russian advisers or SAA specialists as well, it is too sensible not to do it.

If US/NATO may use them just as a 5000m bomb carrier like the Su-24. But what if they are going to use them in both roles as well, where will the FAC be? No problem with Kurds vs ISIS, but say where the SAA is fighting ISIS or even Nusra vs ISIS. Whereas an F-16 would merge in with many other similar shaped aircraft the A-10 sticks out as a definite video opportunity. If a Stinger rises out of a crowded battlefield and hits one, who fired it will be difficult to prove.

I don't think I have put it very well but this could be about to get very nasty.
Cyberspec

I don't think I have put it very well but this could be about to get very nasty.

There's always that risk....but I don't think Daesh has much of an air-defence since the Kwereis airport is being supplied by Mi-8 helicopters....I don't recal any being lost

"Reports that a small number of MANPAD's (probably Stingers) entered Syria & are now in the possession of the mujahidin."

Okay, this guy is member of Nusra, and till this day he was fairly good source of info.

I do hope to see Russian boots on the ground for limited ops. Volunteers or something, just like hezzie troops. They would bulldoze those monkeys back to where they came from. Now SAA has all the support they need, but they are still soft.
Khepesh

here is the original MiG-21 clip: 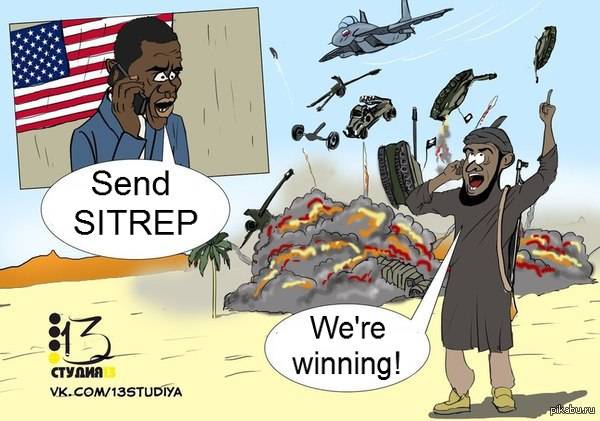 Good news from the Aleppo front...

Khepesh wrote:Change the snackbar for a hohol and this could just as well be Obama phoning Poroshenko 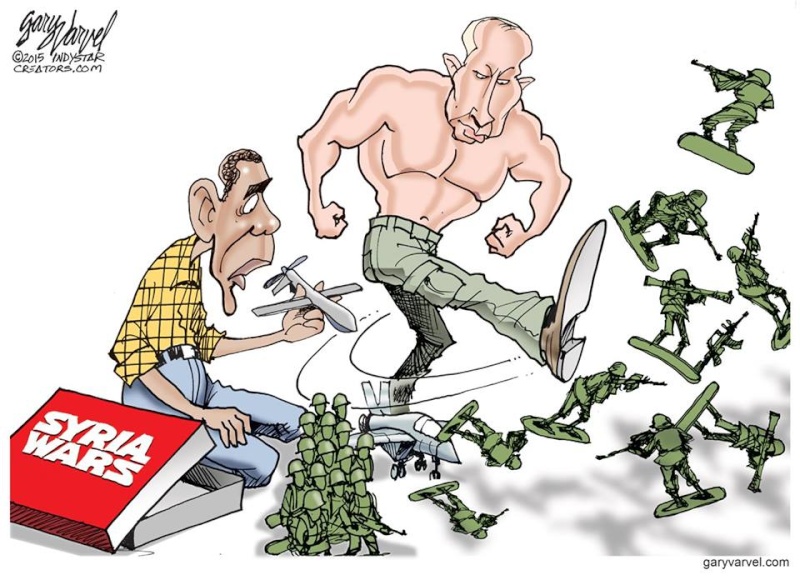 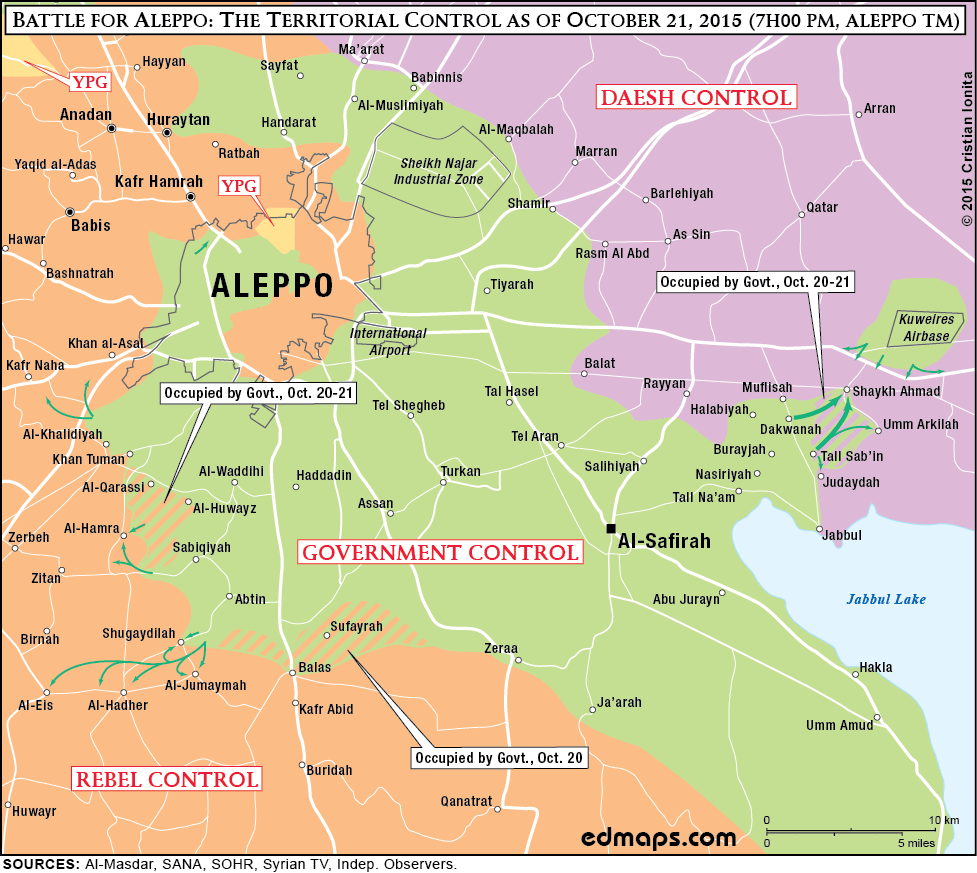 "The kamikaze drones believed to be of Iranian origin were used yesterday [Monday] to strike Syrian opposition military headquarters in the Idlib countryside, causing significant material damage to the target," said Hasan Abu Hamid, an Ahrar al-Sham commander. He said that five drone aircraft with explosive payloads struck one of the group's headquarters in Maar Shimmareen, near the town of Maaret al-Numaan in Idlib Province, killing a civilian.

According to Abu Hamid, the explosive force was equivalent to an 85mm mortar shell, but the weaponised aircraft produced more shrapnel than an artillery round. He said that the drones were able to identify and observe their targets before attack, adding that the aircraft were small and quiet, which makes them very difficult to spot and shoot down."

What they are refering to should be Raad 85 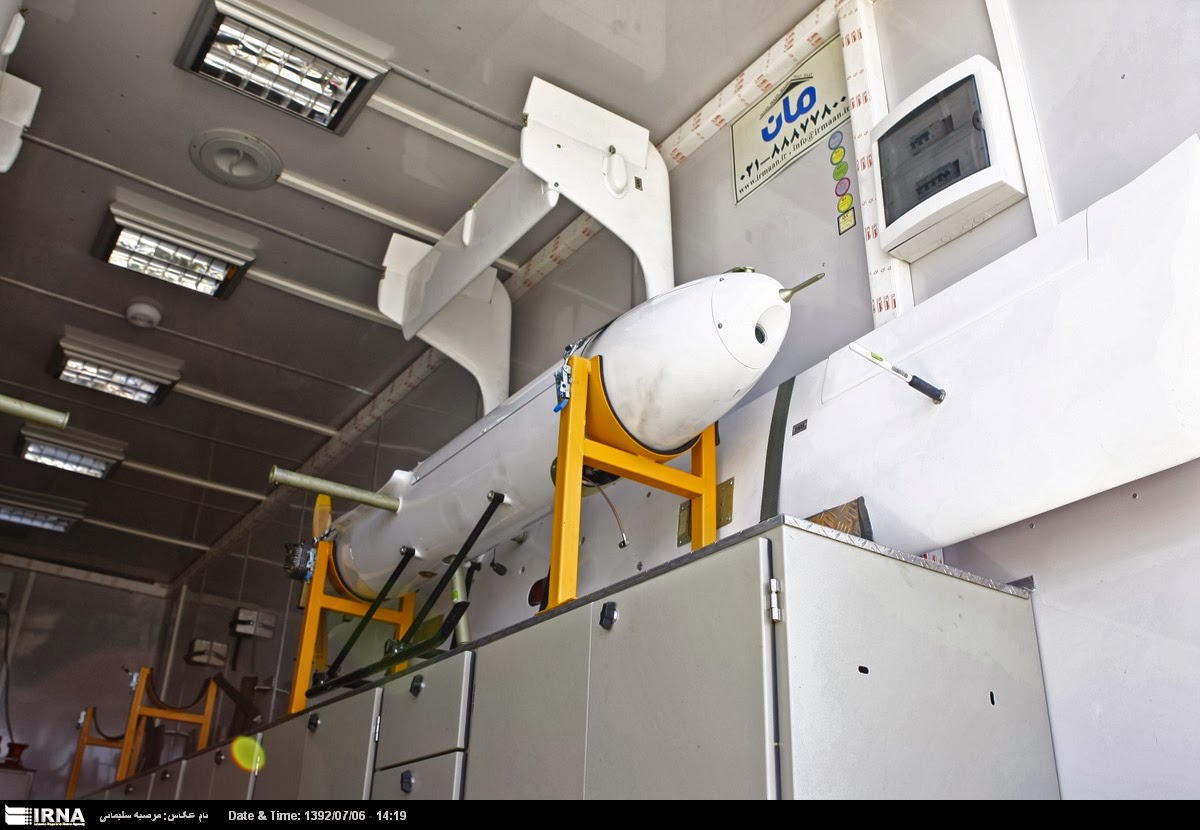 Can someone make us a summary of the front? What progress have been made by the coalition or by the rebels what territorial gains have been made etc? Any maps? any videos? Thanks!
Solncepek

Hannibal Barca wrote:Can someone make us a summary of the front? What progress have been made by the coalition or by the rebels what territorial gains have been made etc? Any maps? any videos? Thanks!

Ok, i will try in the next minutes. Any important info will be pasted in this post

1. Report: Airport in Northeast Syria Closed to Civilian Flights Because of Russian Use

The airport in Qamishli in northeast Syria has reportedly been closed to civilian flights because it is being used as a military base for Russian operations.

2. American killed as hostages rescued in Iraq, sources say
Source: CNN
An American was killed in an overnight operation to rescue Kurdish hostages in Iraq, two U.S. officials told CNN on condition of anonymity Thursday.
Seventy hostages were liberated in the operation, in which Kurdish and Iraqi forces also were involved, U.S. officials said.
The operation was in Hawija, Iraq, one U.S. source said.
Read more: http://edition.cnn.com/2015/10/22/middleeast/us-iraq-hostage-rescue-attempt/index.html

3. The rebel's attack on kweires airbase is repelled.
Unconfirmed: Fight at Sheikh-Ahmad...