What Locations in Russia Should be Guarded By S 400 ?

What areas in Russia should be prioritized for S 400 coverage ? If one assumes 28 regiments are to be built, how would you distribute them ? Already there are 2 regiments around Moscow, 1 in Kaliningrad, 1 in Nakhodka, and 1 in Novorossiysk. What about Saint Petersburg, Novosibirsk, and Yekaterinburg as population and industrial centers ? What about naval locations like Petropavlovsk and Yagelnaya Bay ? Strategic airbases like Engels ? ICBM locations ?
SOC

St. Petersburg and the Kola peninsula have most of the S-300PM batteries. I'd assume a lot of them get displaced by S-400s, allowing them to then displace older S-300PT/PS batteries while waiting for the S-350.
Arrow

Russian air defense is strong only in the region on Moscow, Petersburg, Kola Peninsula. Part of Russian territory doesn't has a radar coverage.
medo

Arrow wrote:Russian air defense is strong only in the region on Moscow, Petersburg, Kola Peninsula. Part of Russian territory doesn't has a radar coverage.

True, parts of territory are without coverage, but those are mostly uninhabited forests and arctic regions, where is practically nothing to defend. Good is, that it is changing now and with building of their net of large OTH radar, whole territory will get radar coverage and building new bases in Arctic region will close large empty space in the north. Russian air defense is strong in whole European part, but less in Siberia and Far East and even there they get new complexes as S-400, Pantsis and Su-35.
magnumcromagnon

A nice cgi video showing the implementation of S-400 triumph:

...Also I have a question, considering that Morfei will be a short-range sam (something like 3 km range) will they compliment armored vehicles by defending against ATGM's, like a APS but on a grander scale?
Viktor

Great video yes ... this picture more clearly shows the level of Integrated Air Defense in Russia (picture is the most basic and uncomplete but still most important parts are there) 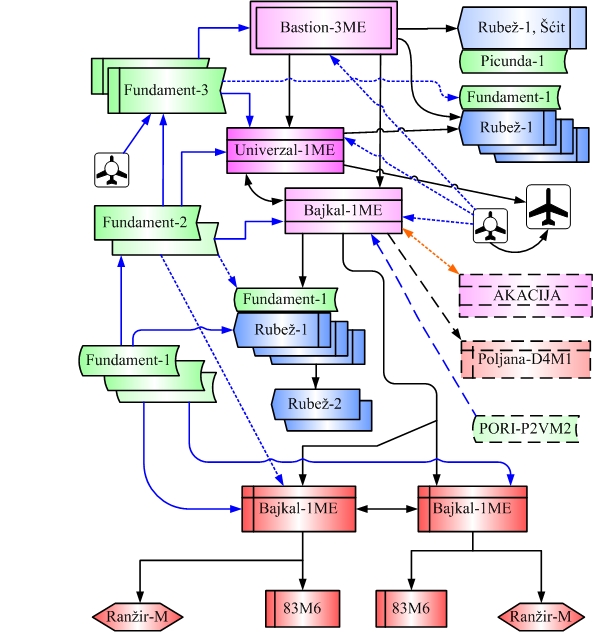 Firstone is by colour where:

Second one, by hierarchy:

at the same time you have command post of radar units

each of these radar command post commands with command post of ECM/ECCM and passive radar units that are its direct subordinates but can (only in case of newer SAM command posts like Baikal-1ME or 55K6) be hooked to it directly.


Third one by the ability to calculate/process targets where for instance 55K6 regimental command post of the S-400 system can process several hundred targets but BASTION-3M can process/calculate few thousand targets. 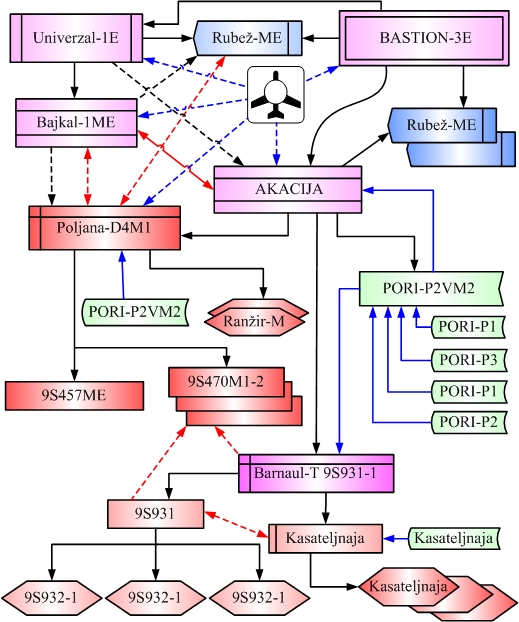 magnumcromagnon wrote:
...Also I have a question, considering that Morfei will be a short-range sam (something like 3 km range) will they compliment armored vehicles by defending against ATGM's, like a APS but on a grander scale?

I think they are better put in sam vehicles against wild weasel missiles, just to stop leakers especially for longer ranged sam that has to engage launch vehicle with own missiles.
That IR seeker would be expensive against most anti-tank threats too, not to mention overkill range.

With a mass produced QWIP sensor it is possible, but I suspect initially they will be deployed like SA-13 and SA-22 and will primarily be used against aerial threats like Helos and weapons fired from aircraft.

AFAIK the range is something like 5km for the ground launched model, and while it could be used effectively against Javelin I rather suspect DIRCMs like technology will be used instead to blind the seeker of the incoming weapon... cheaper and simpler to manage... imagine a Russian unit being attacked by a single Javelin... what happens of all 12 vehicles fitted with morfei open fire on the same missile?

If all 12 vehicles directed a high energy laser beam then the missile will be well and truly dealt with...

Morfei should be a very good AAM and SAM and CIWS for the Navy and eventually it will be produced in numbers large enough to make it fairly cheap and therefore able to be used in a wider variety of roles.

BTW Igla-S is also able to engage Javelin type targets but would be constrained by lack of warning and the requirement for a lock on before launch.
magnumcromagnon

Watch this video and tell me this promo isn't made for Holywood, General Dynamics is implying their new drone can sufficiently knock out Tunguska, S-300, and Iskander-M with ease lmao!

Good luck coming in an effective range with "laser" weapons near an SAM station with 400km range.
Viktor

Good luck coming in an effective range with "laser" weapons near an SAM station with 400km range.

...Yep your right, you don't have to defeat a laser system, the atmosphere will do that for you. A simple countermeasure could be to paint sam missiles with reflective paint.
magnumcromagnon

1.) How effective would the laser systems be? For a UAV to have sufficiently powerful laser it would need lots of power because of how inefficient modern systems are, thus the size of the UAV would have to significantly increase and probably would come with drawbacks to the design (significant increase in cost for one). How well will the laser fair against missiles and sams painted with reflective paint? For a laser to be powerful enough to destroy a radar it needs to generate lots of heat which can be picked up with optical infrared cameras, and considering lasers fire in a straight line the UCAV would be a sitting duck for modern sams and compromise all of it's stealth features (assuming the UCAV in question was stealthy against modern Russian sams, which they're not).


2.) Old Soviet sam tactics defeated modern NATO anti-radar tactics before. During the bombing of Serbia, 3-out-of-22 "mobile" sams were destroyed by HARMS, that's like 13.6% and those sams were obsolete and exponentially inferior to even modern export versions of Russian sams.

There's also tactics such as disguising batteries to look like vegetation/shrubs, there's fake flat cardboard boxes that look like sams from satellite images, there's also inflatable sam look-a-like's designed to fool reconnaissance planes and UAV's. Radar's can be turned off and the UAV's could be tracked by modern optical IR trackers if they're so keen on using lasers.

3.) Like you mentioned the RQ-170 was defeated by Russian ECM battery, many military officials have warned about the likes of the F-35 and littoral ships being susceptible to hacking and other ECM's. let's not forget the Chinese hacked or obtained through other means *cough, Israel, cough* many of the critical secrets of the top U.S. defense contractor programs and databases, from drone programs to stealth programs:

Here we had similar story - LINK

The promo shows a small UCAV which wouldn't have enough space to store the suffecient power supply to make this laser anywhere near effective to work against SAM's and surely not stealthy enough to come anywhere near in an effective range to use its big laserpointer.

If it really wants to be used in such role like they try to advertise it would need to have a plattform in the size of B1 or B2 to store suffecient enough power supply for the laser and at the same time being somewhere stealthy to come closer to its target.

UAVs are so primitive today they only fly in preprogrammed paths, meaning they are just on an imaginarey rail and can not be controlled human to do any kind of evasive maneuvers, meaning it is just a stupid duck flying around that is easy target for every weapon intented for AA role. Just a big amount of money wasted for something that can only be used in a country that has no or an already destroyed anit-aircraft shield and network. But it must be somehow an asset for the own security that this weapons are only good to make a war against banana republics and people that make in their life times less money than the ammunition is used to kill them from plattforms that were supposed to be used against the "Soviet Union" but would fail their objective by the sheer absence of the bad bad commie, who was so selfish to desolve itself without the consultation with the Good guy Cpt. America.

It seems Russia is preparing a powerful laser answer. Russia is not new in laser technology and they develop laser complexes in times of USSR.
Viktor

Nonetheless i sometime wonder why such diversity is necessary.
magnumcromagnon

...May'be in case if one launcher is captured by enemy forces some how, the Russian military could rely on a different platform/launcher and re-tweak and re-work the kind of launcher that was captured, so to minimize the damage caused by the weapon system being compromised.
Viktor

Actually its just the opposite. All the things that can be are put on MZKT-7930 chassis. From MLRS/SAM(Vityaz/S-400)/ECM etc etc ... and that all is about truck unification that Russian

Army announced few years back and has been disscused here also.
TR1

Because our geniuses gave orders that Russian enterprises needed to Belarus. As political gifts, as a ways of stealing money, take your pick.
medo

I was thinking that they will use BAZ platform.
TR1

Does anyone have any information of Soviet/Russian testing of SAM systems (particularly Naval) against Kh-22 rounds?
Vann7

Little of topic or not..

But here says.. S-400 is capable of Intercepting Ballistic missiles at 3,500km altitude..
This is the much higher Number ever mentioned.