Funny thing is, the biggest benefactor for the sanctions on turkey products is Syria. They been supplying Russia with more tomatoes as example.

In 2017 the export of agricultural products from Russia will exceed $20.5 billion

Such a forecast at the XVII annual conference on investments in agriculture "agricultural holdings of Russia — 2017" organized by the magazine "Agroinvestor", said the Director of the analytical center "Sovekon" Andrei Sizov. Exports, in his view, remains the main driver of growth of the agricultural sector. This year, despite an increase in production in many agricultural sectors, agriculture will add no more than 2-3%, he said.

"This is a good, but modest results, — said Sizov. — Especially in comparison with the previous figures. For example, last year the industry showed an increase of almost 5%." Among the main reasons for the slowdown — a stronger ruble and reduction of prices due to record harvest of basic grains. According to "SovEcon", most of the grain fell in the Volga region by 30-40%. In the Central regions of the country fell by about 20%, and in the South — 10-15%. At the same time the main beneficiaries of the situation in the current season will be the ports, elevators and carriers of grain, the expert believes. This will allow them to invest in the development of their business.

The growth of investment activity in agriculture in 2017 is also slowed down and may be only about 2%. The main problem of business stagnation of demand in the stabilization of consumers ' income. According to Sizov, a marked increase in food consumption should not be. "By world standards we already eat pretty good, he says. Global drivers of demand growth it is hard to see".

Although the volume of export of agricultural products increased, the share of Russia in world exports remains insignificant. The main Russian export commodity — grain occupies in the overall trade in the world only 6%. As for the other products, the share of our country's export of fish and oil is less than 3%, meal — about 2%, meat — less than 1%. The world's largest exporters at the end of 2016 — the United States and the European Union (more than $130 billion), and Brazil and China (over $60 billion). "Russia has something to strive", — said Sizov. 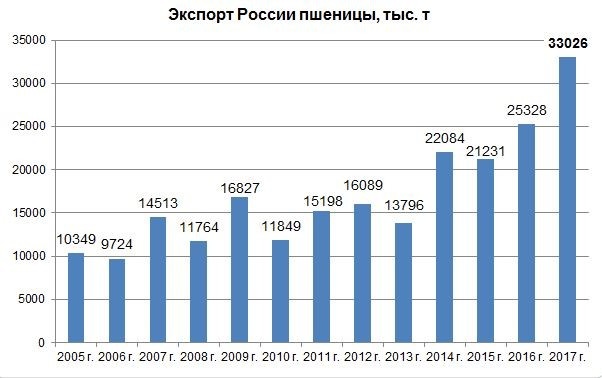 Russian grain exports have shown a clear increasing trend over the last 10 years. Of course natural variability related
to weather is superimpose on this graphic but the underlying increase is definitely not noise.

Butthurt of losers from Moscow Times is delicious. Clowns don't even make an effort to take any photos, they just used Japanese ones (Naotake Murayama / Flickr).

I posted whole text so you guys don't have to give them any clicks:


Domestic seafood production has seen an unprecedented boom in the last few years, with a boost in the oyster and mussel harvest coming from the annexed Crimean peninsula.

The Kremlin imposed an embargo on Western food imports, including oysters, in response to U.S. sanctions on Russia in the wake of its seizure of Crimea in 2014. Until 2014, Russia did not commercially produce oysters and mussels. The production of cheese, fish and other products has adjusted to the import ban with varying degrees of success.

The Russian oyster harvest increased by 265 times in the past three years, the RBC business portal cited the Federal Agency for Fishery saying Wednesday. Around 2 metric tons of oysters were domestically made in 2014; the number shot up to 531 metric tons by 2017.

Mussels farmers also ramped up their harvest from 100 to 1,165 metric tons in three years, a nearly 12-fold increase, RBC said.

The annexed Crimean peninsula was the top oyster and mussel farming region, followed by the Pacific region of Primorye, the Black Sea region of Krasnodar and the northwestern Republic of Karelia, according to the Federal Agency for Fishery.

The agency credited new legislation that expanded the distribution of fish farming sites, in addition to the Kremlin’s import ban on Western-raised seafood, with the three-year surge in harvesting the seafood delicacy

265 times more oysters and 12 times more mussels in 3 years. That's a lot of seafood right there

I read that on sdelanounas. I laughed. These sanctions/counter sanctions are really doing wonders for Russia. Surprised its GDP isn't growing much faster since all indicators are high now.

miketheterrible wrote:I read that on sdelanounas.  I laughed.  These sanctions/counter sanctions are really doing wonders for Russia.  Surprised its GDP isn't growing much faster since all indicators are high now.

I think that Russia's GDP has been understated for the last 18+ years. Originally it served to keep NATO deciders ignorant about
Russia's revival. This may sound silly, but you can clearly see the pattern in the NATO fake stream media. It was writing Russia
off until 2014 and after. But now it is spreading hysteria about a "reviving Russia" (as if it was the USSR or something). Since
NATO deciders are idiots who drink their own propaganda koolaid, Russia is still playing the "weak" card to keep them complacent.
I do not think that it is that effective anymore, but the Russian leadership appears to think it is still worth it.

Another reason that the Russian GDP is not inflating as much is likely related to the large reduction of foreign borrowing and
the very large paydown of foreign debt after 2014. Both of these processes count as pure GDP loss. Paying down US$200
billion on a nominal US$1.2 trillion economy is substantial. It would amount to a 16.7% GDP drop if done in one year. Since
the 2015 recession in Russia was real and induced by the shock devaluation of the ruble in late 2014, we are looking at around
a 20% GDP loss spread out from 2014 onward. But if you look at the reported GDP loss it is much smaller, so substantial
growth has been hidden by the financial conditions.

Also, the GDP is a strange construct and seems to be blind to the sort of restructuring that Russia is undergoing. Import
substitution does not appear to be treated as a net gain for the Russian economy. This would be consistent with the idiotic
notion that foreign borrowing is a GDP positive contribution. So imports are treated like domestic production. Of course,
this is BS. The long term money loss offshore is totally ignored.

Russia has no foodz!!!

This small ports will grow bigger each year.

Dumbass Soviets never expected to produce this much food, let alone export it hence tiny ports (one of many reasons they tanked so hard)

He recalled the growth of agricultural production in Russia by 20% over the past five years, which he called 'a real breakthrough'

"There is a need to consistently work on broadening presence of Russian producers on the domestic market and exploring foreign ones," the head of state said.

The growth of agricultural production in Russia by 20% over the past five years is a real breakthrough, the President said. "In recent years, the agro-industrial complex has shown a positive trend. Over 5 years, the volume of production has grown by more than 20%. This is what is called a breakthrough without any exaggeration," he said.

The Russian leader recalled that at the end of last year, the volume of export supplies of food and agricultural raw materials grew by 21%, exceeding $20 bln, which recently seemed absolutely incredible. Putin compared this figure with the export of arms, which today stands at $15 bln.

The president also noted that in the seven months of this year, agricultural exports grew by almost one third to $13 bln.

"Let me note that as far back as 20 years ago, Russia had to buy grain abroad, and today our country is the largest supplier of wheat, the largest in the world, and ranks second in the world in grain supplies in general," the Russian leader recalled. Speaking about the components of Russian exports of agricultural products, Putin noted that exports of sugar, vegetable oil, pork and poultry are increasing.

The head of state stressed that the transition of the country’s agricultural sector to the export model of the development proves that qualitative changes are taking place in the domestic agro-industrial complex. He added that Russian agriculture has reached a new level of sustainability and become less vulnerable to market fluctuations, and domestic food consumption is becoming less dependent on imports.

Food consumption should be based on nearly 0% for imports.
Hole

0% will never happen. Not only because some fruits don´t grow in Russia. They are selling pork to China... and buying pork from China.

Russia has captured more than half of the world’s wheat market in recent years, becoming the world’s biggest exporter of grain, thanks to bumper harvests and attractive pricing. In 2016, Russia became the world leader in wheat exports. Since the early 2000s, its share of the world wheat market has quadrupled.

MOSCOW, Dec 3 - PRIME. According to the results of 2018, the volume of agricultural exports from Russia will amount to about $ 26 billion, said the head of the Ministry of Agriculture of the Russian Federation, Dmitry Patrushev, at a meeting with Russian President Vladimir Putin.

"The total volume of agricultural exports, as we expect, will be about $ 26 billion by the end of this year," said Patrushev, whose words are quoted in a message on the Kremlin website.

The harvest, which Russia received in 2018, will allow the country to send the planned volumes of grain abroad: the export potential for grain crops is 39 million tons, for wheat - 34 million, said Patrushev.

"The harvest we received will allow both to meet the domestic demand of the Russian Federation for food, and to send the volumes we have planned for export. According to our estimates, the export potential for grain crops will be 39 million tons, of which 34 million will be wheat," said the head Ministry of Agriculture.

According to the Minister of Agriculture, Russia in 2018 harvested a good grain harvest - 110 million tons in net weight, grain and leguminous crops are threshed on 100% of the area.

Russian arms are to cheap.

Earlier on Friday, the Ministry of Agriculture announced an increase in the forecast for grain exports in the current season to 42 million tons. "Of these, wheat is 37 million tons," the press service said.

And in a few years the russian far east will become one of the largest exporter of soybeans.
Walther von Oldenburg

In 2018 Russia Exported More Wheat Than Any Country Ever
https://russia-insider.com/en/2018-russia-exported-more-wheat-any-country-ever/ri26408
Sponsored content